Racial Background and Health Behaviors Among Adults With Cancer in Canada: Results of a National Survey

Patients with cancer and cancer survivors are generally advised to observe healthy behaviors during and after the end of cancer treatment. 1 These include maintaining recommended vaccinations (eg, influenza vaccination), maintaining physical activity, limiting consumption of alcohol, and abstinence from cigarette smoking and illicit drug use. 2 –5 Previous studies have linked these healthy behaviors with favorable long-term outcomes. 6,7 Although previous studies have assessed patterns of health behavior among Canadian adults with cancer, assessment of the impact of racial background and socioeconomic factors on these health behaviors in a national context was not available. 8 Such an assessment is important to guide health authorities and practitioners to provide a personalized cancer survivorship message (according to individual characteristics) instead of the currently available generic messages and advice that do not take into consideration the variable prevalence of different behaviors in different sectors of society. 1,9 –13

The Canadian Community Health Survey (CCHS) is a national survey that has been conducted regularly on an annual basis. 14 It provides population-level data on health status, social determinants of health, and health resource use within a representative sample of the Canadian population. Therefore, it offers an ideal context to study health behaviors and patterns among different subgroups of the population, and thus should help tailor the public health message to the needs of the public. The main hypothesis of the present study is that health behavior patterns differ according to socioeconomic status (SES) and racial background, and the objective of this study is to assess the impact of racial background on health behaviors among Canadian adults with a current or past history of a cancer diagnosis.

CCHS is an annual cross-sectional survey that provides information about health conditions, attitudes, and behaviors of Canadians aged >12 years. Almost 97% of the Canadian population is represented within CCHS datasets; those who are not represented include some individuals living in indigenous settlements, Canadian Forces full-time members, some Quebec health regions, and institutionalized people. A sampling of participants was conducted through area framing (using Statistics Canada’s Labour Force Survey sampling frame), list framing (using the Canadian phone directory), and supplementation with random dialing in some health regions. Data collection and interviews were conducted through personal and telephone-based interviews. Full details about the methodology used in CCHS sampling were provided in its published documentation. 14 The CCHS response rate from 2015 to 2016 was 59.5%, and in 2018 was 58.8%.

The following selection criteria were used for this study cohort: adult (aged >18 years) residents of Canada who were included in the respective CCHS datasets and had a history of a cancer diagnosis. CCHS datasets contain 2 questions related to cancer history. The first question is, “Do you have cancer?” If the participant answers “no,” then they are asked, “Have you ever been diagnosed with cancer?” Based on the answers to both of these questions, CCHS participants were classified into those with a current cancer diagnosis and those with a history of cancer (survivors); those without a history of cancer were excluded.

The following data were collected from each included participant when available: age at survey completion, racial background (White, indigenous, or non-White and nonindigenous), sex, cancer history, total household income in Canadian dollars (<$20,000, $20,000 to <$40,000, $40,000 to <$60,000, $60,000 to <$80,000, ≥$80,000), province/territory of residence at the time of survey completion, self-perceived health, self-perceived mental health, and marital status. Among individuals identifying as non-White and nonindigenous, the following information was collected: knowledge of official languages (English and/or French), place of birth, and length of time in Canada since immigration (if applicable). Further description of the racial background of this group (eg, Black or Asian) was not provided within CCHS datasets.

The following data were also collected: history of influenza vaccination (flu shot) in the past year, physical activity level (at/more than vs less than recommended level according to Canadian Physical Activity Guidelines), 15 current smoking status (daily, occasionally, or not at all), alcohol consumption in the past 12 months (yes or no), and recreational drug use (including marijuana) in the past 12 months (yes or no). It must be noted that recreational drug use was reported in CCHS datasets as “illicit drug use,” but because this category includes marijuana use (which was legalized in Canada in 2018), the term “recreational drug use” was used in the present study. Current smokers were defined as those who reported being current daily or occasional smokers.

Multivariable logistic regression analyses were then conducted to assess the factors affecting each of the following: influenza vaccination, physical activity, alcohol consumption, cigarette smoking, and recreational drug use. It must be noted that the population used in each of these models was limited to individuals with complete information about the respective endpoint. Each of these models was adjusted for age, racial background, sex, marital status, income level, self-perceived health, self-perceived mental health, and cancer status (current cancer diagnosis vs cancer history). These variables were chosen because of their proven relevance to health behaviors and outcomes among patients with cancer. All statistical analyses were conducted using SPSS Statistics, version 26.0 (IBM Corp.), except for weighted frequencies, which were performed using STATA, version 14.0 (StataCorp LLP). 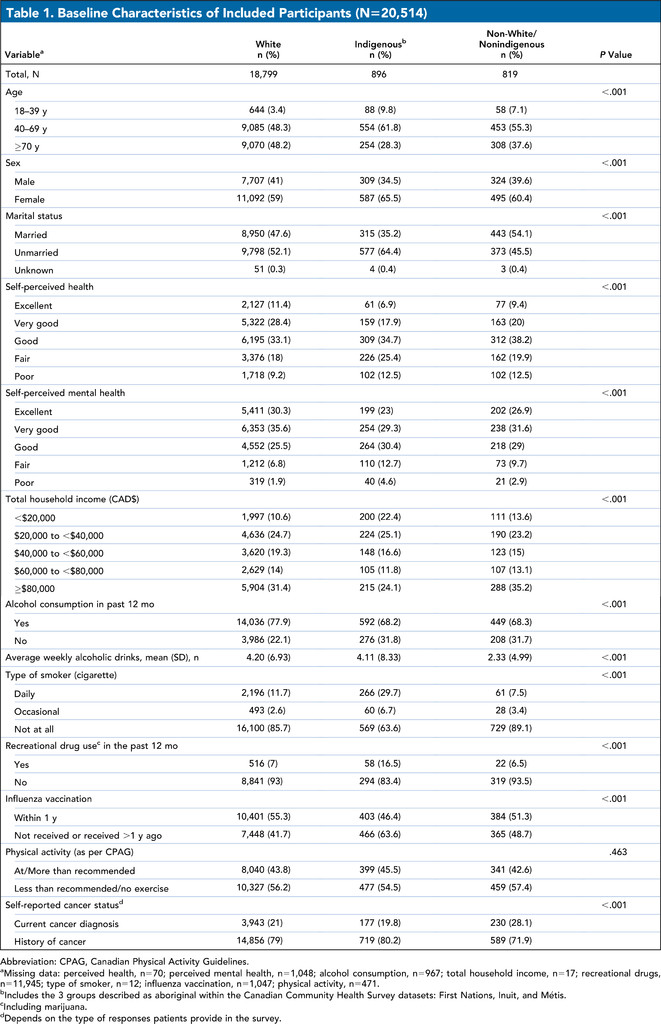 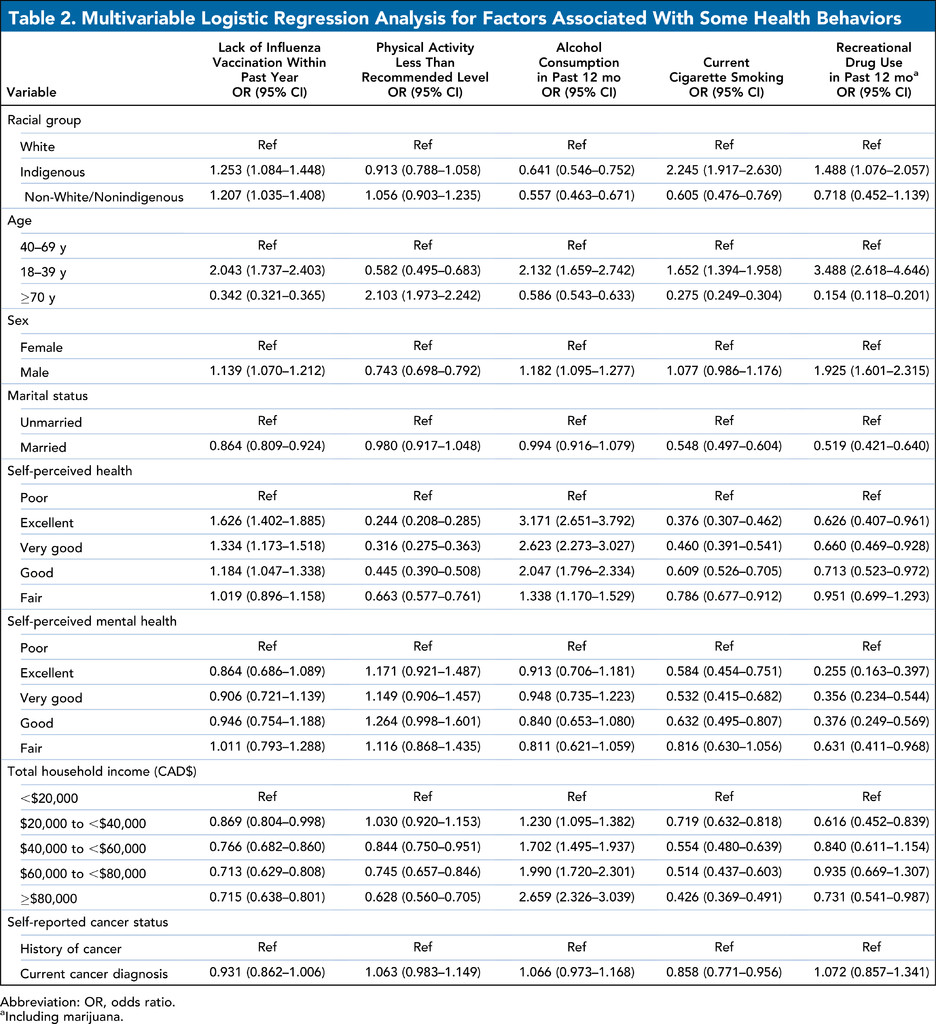 It is important to note that a number of factors might have contributed to the observed differences in health behaviors. Within this study cohort, individuals with indigenous racial background were younger in age, which could have partly contributed to a higher probability of cigarette smoking and illicit drug use. Moreover, this can explain a higher probability of achieving recommended physical activity levels in the weighted frequency analysis. Likewise, the differences in income between participants of different racial backgrounds likely affected the observed differences in health behaviors. There could also be an element of geographic disparity interacting with racial disparities. For example, individuals living in remote areas within different jurisdictions would be less likely than those living in metropolitan areas of the same jurisdiction to access different aspects of preventive/survivorship care. It was not possible to adjust for this factor in the present analysis. It is notable also that cancer status (current diagnosis vs history) seems to have an impact only on current smoking pattern (cancer survivors were more likely than current patients with cancer to be current smokers).

Previously published studies from several Canadian jurisdictions clarified the particular challenges faced by patients with cancer with an indigenous racial background. 16 –18 However, the present study is unique in its up-to-date data collection and the comprehensive national overview it provides; previous studies focused on one Canadian province only. The current study also highlights the association between low SES, specifically income, and some unhealthy behaviors among adults with cancer. These results are in line with previously published data in Canada and other parts of the world. This is also in line with other publications highlighting the association between low SES and poor cancer-specific outcomes across many solid tumors. 19 –22 Similar disparities in health behaviors have also been noted in the general population in Canada. 23

The current study has suggested that almost 50% of adults with cancer in Canada did not receive influenza vaccination in the past year up to survey completion. This is consistent with a number of population-based studies in North America and elsewhere suggesting the challenges associated with adherence to recommended vaccination among patients with cancer. 24 –27 There is a need for focused awareness campaigns and involvement of different healthcare providers to ensure better adherence rates among patients with cancer. The current study also showed that >50% of participants did not fulfill Canadian Physical Activity Guidelines recommendations for physical activity. This is concerning, given prior attributes of >3,000 cancer cases in Canada to leisure-time sedentary behavior in 2015. 28 Further work is needed to improve the awareness of adults with cancer about the importance of maintaining physical activity.

The present study has many limitations that are important and relevant to discuss. First, racial background is based on self-identification by participants. A previous study from the United States suggested an 11% discordance rate between race within a cancer registry and self-reported race. 29 Likewise, the diagnosis of cancer itself is based on self-reporting by participants. A previous Australian study cast some doubt on the validity of self-reported information in colorectal cancer diagnosis. 30 This is a potential source of bias related to the misrepresentation of individuals’ racial background and/or their cancer diagnosis/status. Second, information about cancer type, cancer stage, age at diagnosis, or treatment is not available within the CCHS. Although the 2 questions related to cancer status within the CCHS were used as surrogates for cancer history, they are still crude surrogates because this was not confirmed by objective recording in medical records. Moreover, time since cancer diagnosis is not available. Third, the cohort seems to be skewed toward individuals with White self-identified racial background; people self-identifying as being White represented 91.6% of the study population (unweighted frequencies), whereas they represented only 73% of the Canadian population in the 2016 census. 31 Although reasons for this disproportionate representation are unclear in the CCHS documentation, the fact that some individuals living in indigenous settlements were not represented in the CCHS datasets may have affected the overall representation of different racial groups. Frequency analyses incorporating study weights were added to this study to improve the representativeness of the results (although, as suggested previously, when pooling weights from multiple survey cycles, the resulting weights do represent an average population that does not exist). 32 Fourth, CCHS datasets focus on the health behaviors of participants but do not comment on health outcomes. Thus, it is not possible to understand how these variable health behavior patterns have affected cancer-specific outcomes in the study population. Fifth, the 3 mentioned racial groups in the present study (White, indigenous, and others) are not, in themselves, homogeneous groups. Within each racial group, there is a possibility of many subgroups that might differ in their health behaviors. Sixth, SES was measured in this study through assessment of total household income. It has been suggested previously that a more comprehensive approach incorporating other dimensions of SES would be more accurate. 33,34

Overall, these limitations suggest that the results of the present analysis do indicate association rather causation, and further work is needed to confirm these results. These limitations need to be reviewed against the strengths of the present study, including its relatively big sample size, and the contemporaneous nature of data collection.

Current awareness and support programs for patients with cancer and cancer survivors in Canada generally follow a “one size fits all” paradigm, whereby similar advice is provided to adults with cancer regardless of their socioeconomic and cultural background. The present study indicates that such a generic approach is not appropriate, and it is important to retailor support services to better match the needs and challenges faced by different subgroups of society. Cultural competency training also needs to be part of the training process of healthcare providers caring for patients with cancer, and cancer therapy navigators can play an important role in bridging the gaps between providers and patients. 35 It has been suggested previously that survivorship care plans would improve the outcomes of cancer survivors. 36

Within the Canadian context, there is considerable variability in the health behaviors of adults with cancer according to their racial background. Further work is needed to improve awareness among patients with cancer from different backgrounds regarding the importance of healthy behaviors, and to minimize the disparity in access to supportive services.

Weighted distribution of different health behaviors according to racial background. Rates of (A) having influenza vaccination within 1 year of survey completion, (B) having recommended/above-recommended exercise level, (C) alcohol consumption, (D) current smokers, and (E) recreational drug usea. Caution is needed when interpreting the results of these charts because of the small numbers of participants in each subgroup. The Yukon Territory, the Northwest Territories, and Nunavut are not represented in these figures because very small numbers of participants from these jurisdictions were included. 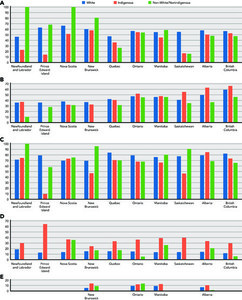