A fundamental goal of cancer centers is to improve cancer care through the design and conduct of therapeutic clinical trials.1 Progress in prevention and control of cancer depends on research that identifies treatments that prevent or delay death caused by cancer or improve quality of life for patients living with cancer. Clinical trials, to whatever extent possible, should address disease across broad categories of age, sex, race, and ethnicity,2 both to ensure that targeting of interventions can be fine-tuned and generalizability of results.3 Clinical trial participation may be one way to assess diversity and equitable access to cutting-edge cancer care.4,5

Cancer centers are charged with ensuring equitable access to care among patients. Equitable access is inherently multidimensional, with patient/case characteristics, such as cancer type, stage, age, race, ethnicity, sex, socioeconomic class, education level, marital status, and comorbid conditions, affecting participation. Thus, depending on how the question is framed, equitable access can be defined across multiple patient or case subgroups. From the standpoint of NCI reporting, assessment of diversity in clinical trial participation has been accomplished primarily by comparing the proportions of racial and ethnic categories across1 the population from which a cancer center draws (an institution-defined catchment area),2 the cancer cases seen within the center,3 and the participants in therapeutic clinical trials.6 Two limitations of this approach are that the determination of catchment area from which a cancer center draws may be somewhat arbitrary and designated without regard to patient willingness to travel for care,1 and that percent participation is influenced by a host of factors outside the control of the institution, including health insurance coverage, referral patterns, cultural preferences, and competing providers.2,7–9

The Sidney Kimmel Comprehensive Cancer Center at Johns Hopkins (JH SKCCC) is situated in the city of Baltimore, where two thirds of the population consists of racial minorities (non-white). Cancer treatment services are provided by many other hospitals in Baltimore City.10 The JH SKCCC catchment area was defined through a data-based cluster assessment, using SaTScan, as a contiguous cluster of 58 counties centered on Baltimore City. The defined catchment area has remained stable.11

Catchment or health service areas are characterized by a balance of market share and proximity.12,13 Moreover, there is a distance over which patients are willing to travel for the service provided, irrespective of disease.14 We would expect this to be true for those participating in cancer clinical trials. The authors' previous research found that size of the catchment area for the JH SKCCC differs between whites and blacks (58 vs. 15 counties, respectively), a finding that might contribute to clinical trial enrollment disparities.11 The authors were also interested in how well JH SKCCC served Baltimore City as the immediate neighborhood, and therefore assessed 3 main geographic areas: Baltimore City, the remainder of the catchment area, and the non–catchment area as defined by county of residence. Using these geographic definitions, the authors hypothesized that overall, therapeutic and nontherapeutic clinical trial participation and clinical trial participation according to race also may vary by location. They assessed the clinical trial accrual to cancer case ratio (ACR) in this study to simultaneously evaluate racial and geographic disparities, including a race–geographic area interaction, at JH SKCCC. Independent effects and differences accounted for by sex, age, cancer site, and county poverty also were examined.

Patients with newly diagnosed cancer or patients undergoing all or part of their initial treatment at JH SKCCC were identified through the Johns Hopkins Hospital (JHH) cancer registry. All accruals to cancer clinical trials, including therapeutic and nontherapeutic studies, were recorded by the JH SKCCC Clinical Research Office. This study was designated as exempt by the institutional review board of the Johns Hopkins School of Medicine.

This study included analytic cancer cases and accruals to clinical trials enrolled from 2005 to 2007. Year of diagnosis for each case was defined based on the composite medical record, with preference going to a pathology report of cancer for date of diagnosis. Cancer center analytic cases are defined by the American College of Surgeons as initially diagnosed or receiving all or part of the first course of treatment within the center.15 Study subjects were residents of the continental United States at diagnosis. This analysis comprised 17,637 analytic patients and 5068 accruals.

Numbers of clinical trial accruals among Hispanic individuals were small and thus not considered in this Poisson, multivariate analysis, which requires sufficient and non-zero sample size in most cells. During the 5-year period, the JH SKCCC registered 163 Hispanic patients and 79 accruals; nevertheless, these patients are included in the race (white, black, and other races) analysis. Place of residence and race were the independent variables of interest.

Race was abstracted by the JHH cancer registry staff from the medical record. Most JH SKCCC patients could be categorized as white or black (97%); all persons of non-white or non-black race were coded as “other races.”

Cancer case and clinical trial accrual characteristics of age (< 20, 20–64, > 64 years), sex (male, female), and cancer site (brain, breast, gastrointestinal, hematologic cancers, prostate, upper aerodigestive, and all other sites) were abstracted from the medical record. In therapeutic accrual data, 3 patients are missing race information, 94 are missing age, and 1 is missing the cancer site. Among nontherapeutic accruals, 8 are missing race, 61 are missing age, and 1 is missing cancer site. Observations with missing information were excluded in multivariate analysis.

Cancer site groupings were based on the JH SKCCC organizational structure and reflect programmatic structures within JH SKCCC. During Poisson regression analyses, cancer sites were further aggregated into 3 classes based on the level (high, medium, and low) of the unadjusted therapeutic trial accrual ratio. The first cancer site grouping consisted of hematologic malignancies; the second, prostate and gastrointestinal; and the third, all others. This strategy also had the advantage of allocating approximately one third of the therapeutic trials to each group.

Poverty level was assigned based on county of residence using FIPS code and defined as percentage of individuals living at or below 100% poverty in 2003.16 The authors presented poverty level by county quartiles (≥ 16.2; 12.6–16.1; 9.8–12.6; ≤ 9.8%) and unknown in bivariate analyses. In Poisson analyses, binary categories of poverty of 16.2 or more, and poverty less than 16.2, including poverty unknown, were used to minimize the number of combinations during multivariate analysis.

A clinical trial ACR “relative risk” (RR) was calculated. The ACR RR compared the ACR for various subpopulations to the reference group. Subpopulations were based on age, race, sex, cancer site, place of residence, or county poverty. The ACR RR is the ratio of 2 ratios: the subpopulation ACR and the reference group ACR. The authors hypothesized an interaction of residence in Baltimore City and participation in clinical trials by African Americans; that is, this grouping of clinical trial accruals, adjusted for patients from the same grouping, differs from any other race–geography grouping. This was tested explicitly and was not significant, so the final multivariable models considered all independent variables and covariates without interaction terms. Statistical significance of subpopulation differences was based on analysis of variance (ANOVA).

Because poverty and minority race are closely associated,17 the authors calculated the variance inflation factor (VIF) statistic, which measures the magnitude of multicollinearity, for the final regression model. The VIF was less than 2.8 for all predictors, well within the judgement of little evidence for multicollinearity.18 Statistical software R was used for all analyses.

From 2005 to 2007, 17,637 cancer cases diagnosed among people living in the continental United States were treated at the JH SKCCC. Persons of white race (82%), male sex (61%), age 20 to 64 years (65%), the non–Baltimore City catchment area (63%), and least-poor counties (85%) predominated. Regarding cancer site, prostate cancer comprised the largest single subset, at almost one quarter of all cancers diagnosed. These predominant characteristics were the same for non–Baltimore City catchment area and non–catchment area geographic groups. Among Baltimore City residents, however, African Americans were the majority race (55%), the number of men and women were nearly equal (49.8% and 50.2%, respectively), and upper aerodigestive cancers (21%) represented the most commonly diagnosed cancer site (Table 1).

Patient Demographics, Cancer Site of Diagnosis, and County Poverty by Place of Residence 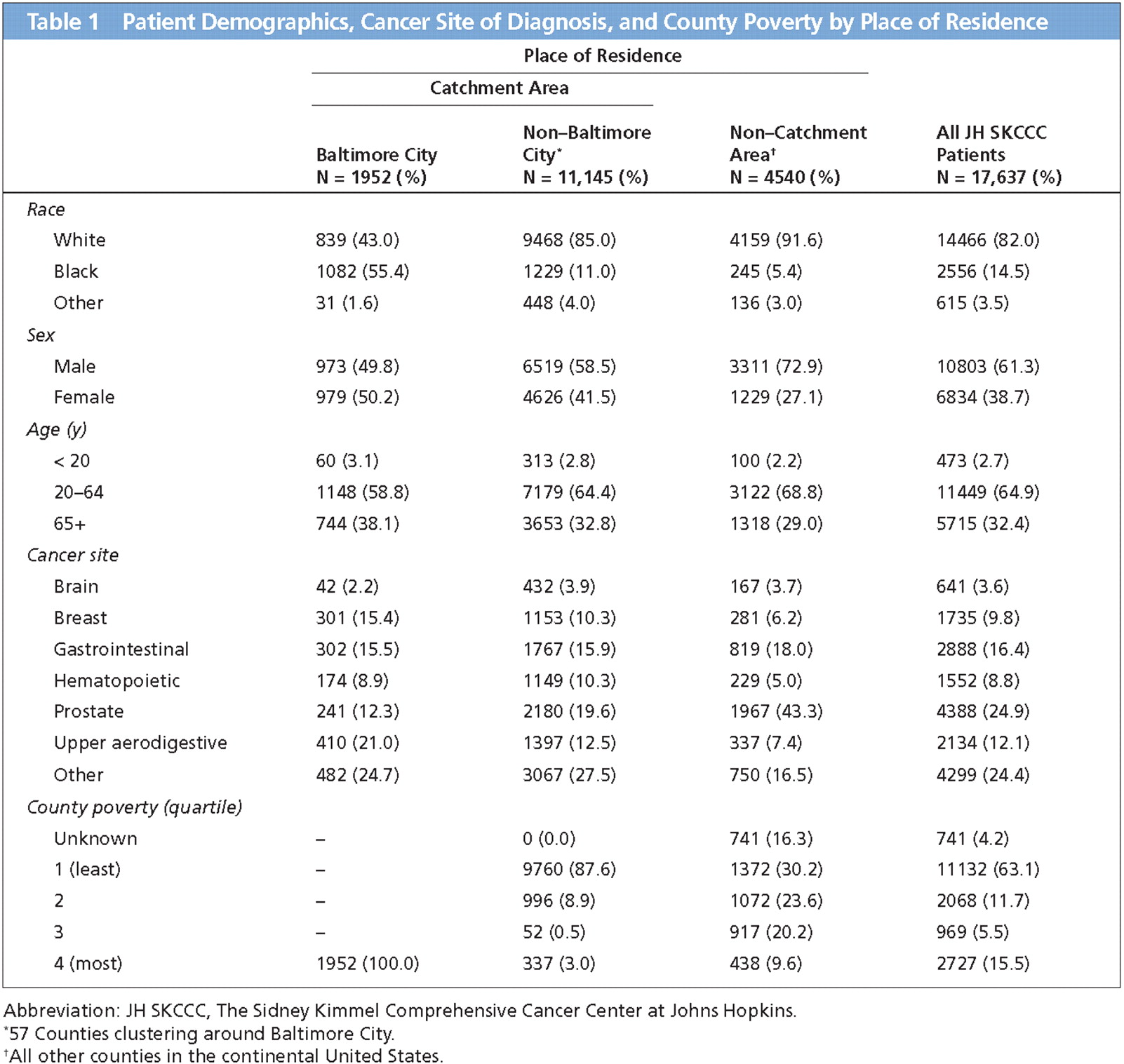 Multivariate Poisson regression was performed to obtain therapeutic and nontherapeutic ACR RRs according to patient/case category (Table 3). Reference groups included those aged 20 to 64 years, of male sex, of white race, living in a county with less poverty, residing in non–Baltimore City catchment area at diagnosis, and with cancer diagnosed at a site other than hematologic, gastrointestinal, or prostate (Table 3). Adjusted (for age, sex, race, place of residence, and county poverty level) therapeutic ACRs were statistically higher than expected for those aged 65 and older, female, or diagnosed with a hematologic, gastrointestinal, or prostate malignancy. Lower-than-expected adjusted therapeutic ACRs were found among African Americans (0.73; 95% CI, 0.65–0.82; P < .001) or living nearer or further away (Baltimore City, 0.64; 95% CI, 0.52–0.79; P < .001, and non–catchment area, 0.76; 95% CI, 0.70–0.84; P < .001). County poverty level was not significant but was retained as a confounder. An interaction term for race and geography was formally tested and was not significant (P > .05). 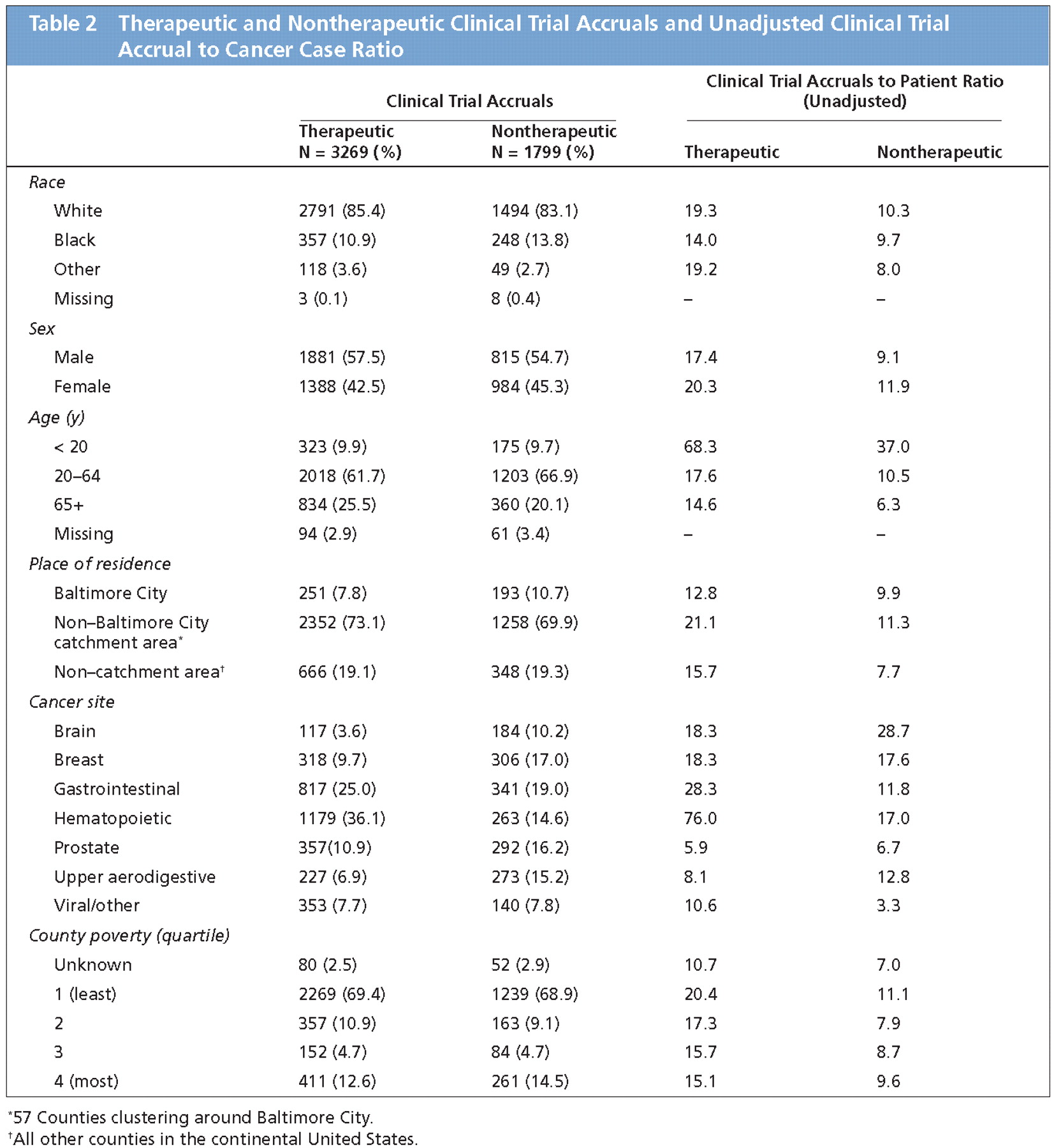 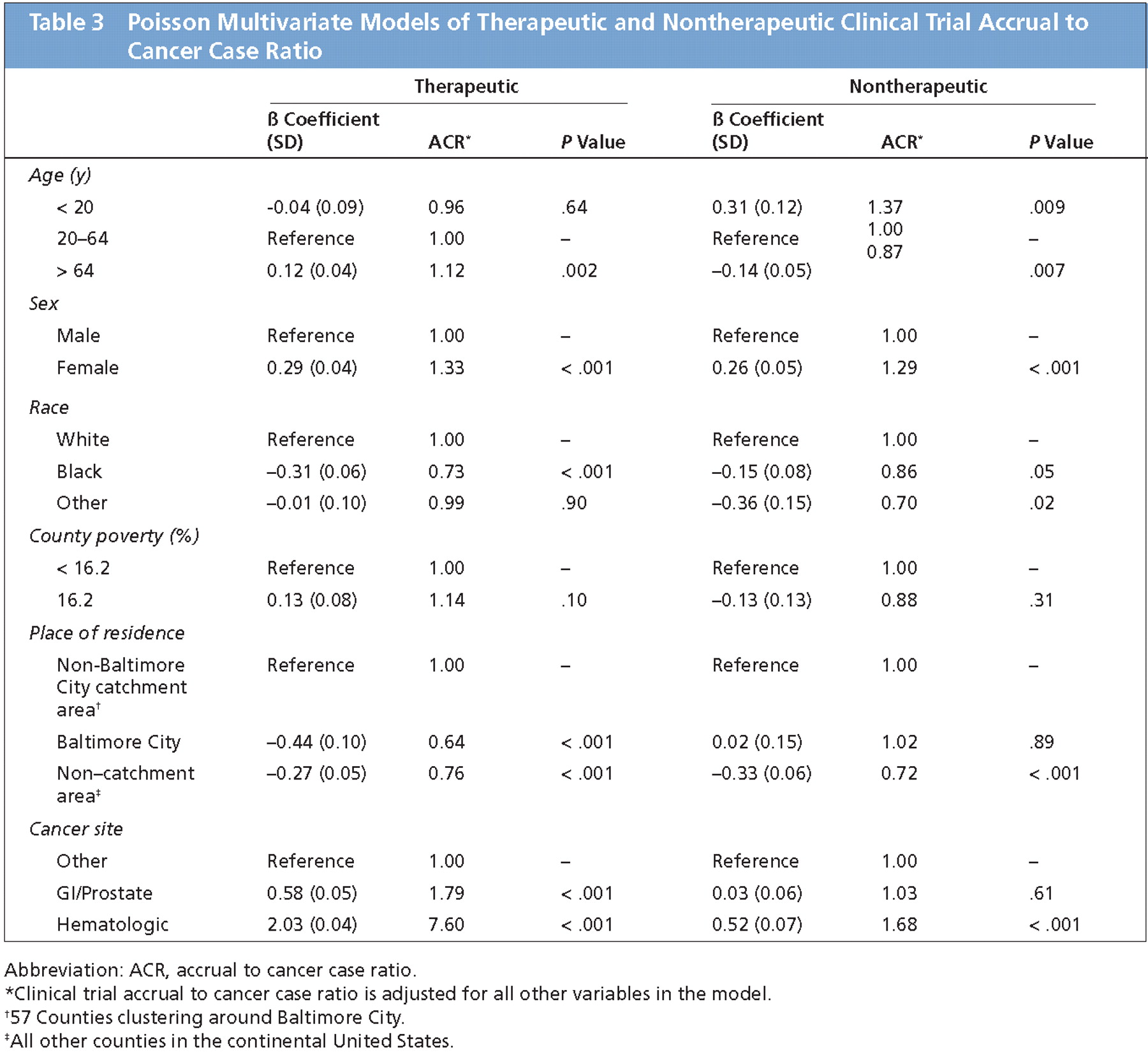 The population of the Baltimore metropolitan area has many hospitals offering oncology care. In which hospital one should seek care may not be an individual decision, but can be dictated by an insurance company's preferred provider policies.2 This study did not specifically address insurance status or specific payors, which are putative determinants of both locus of care and clinical trials participation.20 Cancer site– and geographic area–specific trial accrual may be subject to local referral patterns and should be examined. Hematologic malignancies are one cancer site for which a preponderance of pediatric patients who typically participate in trials at higher levels and seek care locally may be found in Baltimore City. Another factor influencing accrual to trials is the availability of trials themselves and a cancer center's business practices according to cancer site. This could be seen in prostate cancers at JH SKCCC, which predominate in patients served but contribute a relatively small portion of accruals because of the distance traveled.11

The finding of lower participation among Baltimore City residents of any race relative to those of white race in the catchment area outside the city is somewhat surprising because proximity frequently dictates level of use of primary care services.21 In the case of therapeutic trials, racial disparities were observed in the catchment area, with African Americans in the catchment area outside Baltimore City participating less than white persons. This finding may indicate other contributing factors in determining participation levels. For instance, Probst et al.22 found that black patients at the same distances reported requiring more time to get to the place of treatment and Basu and Friedman23 reported a higher disease severity in black patients relative to white patients for the same distance traveled.

The nature of clinical trial disparities is complex and inherently multifactorial.24 Defining the primary factors contributing to observed disparities requires access to detailed and comprehensive databases, including cross-referenced clinical trial databases, patient case registries, and annotated population demographics both within and beyond the center's catchment area.25 Thoughtful analysis of these integrated data can help identify particularly important sources of disparity, both in terms of access to care and clinical trial enrollment. Clinical trial accruals are likely not uniform across age, sex, race, Hispanic ethnicity, place of residence, or cancer site, underscoring that cancer centers must better understand their source patients to enhance clinical trial participation. Ultimately, these analyses serve the cancer research community by helping to ensure that the research has the broadest possible applicability to the patient populations served.26

The authors have disclosed that they have no financial interests, arrangements, or affiliations with the manufacturers of any products discussed in this article or their competitors. This work was supported in part by the Maryland Cigarette Restitution Fund at the Johns Hopkins Sidney Kimmel Comprehensive Cancer Center.