Risk of New-Onset Prostate Cancer for Metformin Versus Sulfonylurea Use in Type 2 Diabetes Mellitus: A Propensity Score–Matched Study

Prostate cancer is the most common cancer diagnosis among male patients, and in 2019 was one of the main causes of death worldwide, with 487,000 deaths.1 Known risk factors for prostate cancer include family history, ethnicity, and age.2 Type 2 diabetes mellitus (T2DM) increases the risk of developing cancers such as colon, pancreatic, and bladder cancer.3 However, the relationship between T2DM, glycemic control, and prostate cancer remains inconclusive.4–6

This study was approved by the Joint Chinese University of Hong Kong–New Territories East Cluster Clinical Research Ethics Committee and the Institutional Review Board of the University of Hong Kong/Hospital Authority Hong Kong West Cluster. In this retrospective population-based cohort, we investigated the long-term effects of metformin versus sulfonylurea on the risk of new-onset prostate cancer using a propensity score matching approach. Patient data were collected from the Clinical Data Analysis and Reporting System, a comprehensive territory-wide database from individual public hospitals or outpatient facilities in Hong Kong. Data on mortality were accessed through the Hong Kong Death Registry, an official government registry with all of the registered death records in Hong Kong. No adjudication of the outcomes was performed in this study, because it depended on ICD-9 coding or death registry records. The coding was conducted by clinicians and other administrative staff who were not involved in the research process. This system has previously been used by our team and other teams to conduct population-based research on different diseases,12,13 including diabetes mellitus.14–17

Inclusion criteria were patients with T2DM who were prescribed either metformin or sulfonylurea and who presented to local government hospitals or outpatient clinics between January 1, 2000, and December 31, 2009. Exclusion criteria were concomitant users of both metformin and sulfonylurea, <90 days of exposure of metformin/sulfonylurea in the first year after T2DM, baseline age <18 years, a cancer diagnosis before and within 90 days of T2DM or before initial metformin/sulfonylurea exposure, and patients who died within 90 days of T2DM, with prior renal failure diagnosis, new-onset prostate cancer within 1 year of drug exposure, and prior HIV infection.

The primary outcome was new-onset prostate cancer. The secondary outcome was all-cause mortality. All patients were followed up until December 31, 2019.

Hazard ratios (HRs) with corresponding 95% confidence intervals (CIs) and P values were reported. All P values were 2-tailed, and values <.05 were considered statistically significant. Multiple imputations by chained equations were performed for missing values in fasting blood glucose and HbA1c. Each missing value was imputed 20 times using other variables. Propensity scores of each patient in the cohort with the confounding variables were calculated with a logistic regression model. There was no blinding for the predictors, because the data were obtained automatically and directly from the electronic health records. RStudio software (version 1.1.456) and Python (version 3.6) were used for data analyses throughout the study.

A flow diagram of the cohort identification, inclusion, and exclusion is shown in Figure 1. In total, 131,160 male patients with T2DM were identified. After excluding patients without metformin or sulfonylurea use (n=22,797), those with both metformin or sulfonylurea use (n=40,311), with <90 days of exposure of metformin/sulfonylurea (n=1,015), with a baseline age <18 years (n=35), with a cancer diagnosis before and within 90 days of T2DM diagnosis or before initial metformin/sulfonylurea exposure (n=231), who died within 90 days of T2DM diagnosis (n=117), with prior renal failure diagnosis (n=135), and with new-onset prostate cancer within 1 year of drug exposure (n=89) or HIV infection (n=19), a total of 66,411 male patients were included (mean [SD] age at initial drug use, 65.3 [12.3] years) with a median follow-up duration of 119.6 months (IQR, 91.7–139.6). After 1:1 propensity score matching, the final matched study cohort consisted of 25,695 metformin users and 25,695 sulfonylurea users. HbA1c (expressed as a percentage) was similar in both metformin and sulfonylurea users (mean [SD], 7.45 [1.47] vs 7.45 [1.42], respectively; SMD, <0.01). Baseline and clinical characteristics of the study cohort before and after propensity score matching are shown in Table 1 and supplemental eTable 4. Distributions of propensity scores for metformin and sulfonylurea users before and after propensity score matching with the nearest-neighbor matching strategy and a caliper of 0.1 are presented in supplemental eFigure 1. 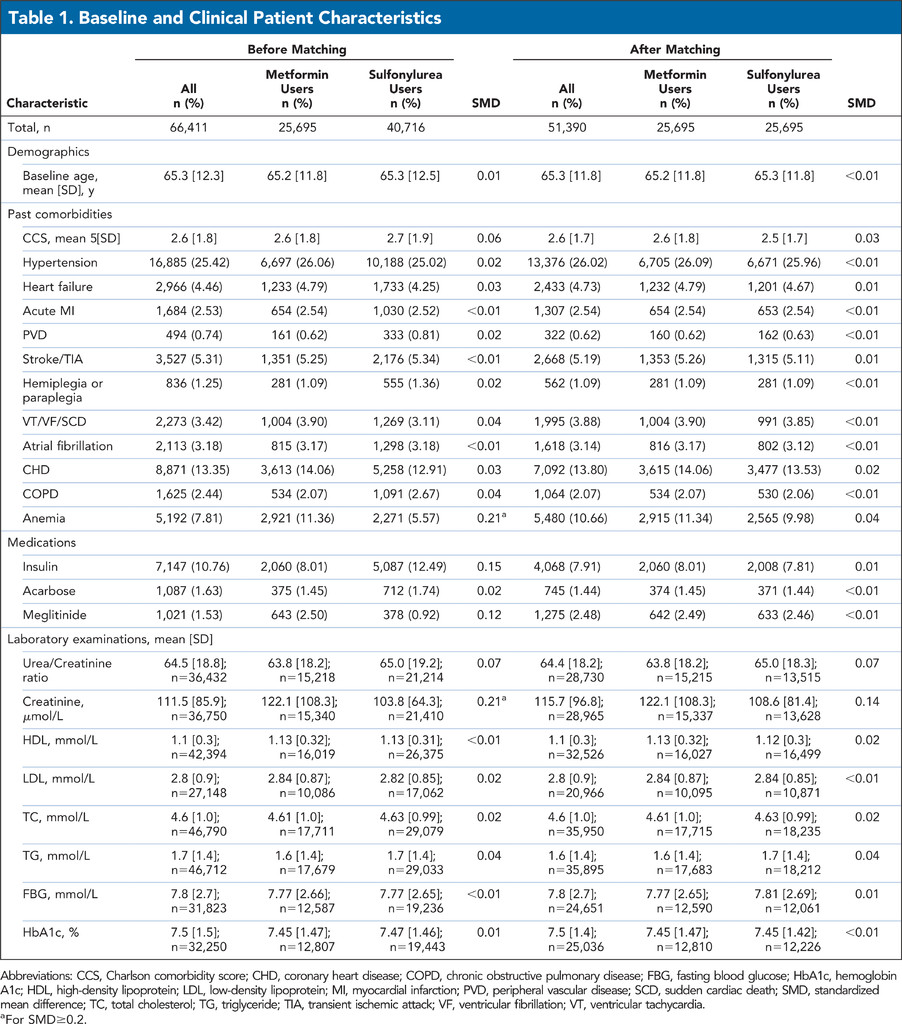 The results of Cox regression are shown in Table 2 and supplemental eTable 5. Metformin users had significantly lower risks of new-onset prostate cancer (HR, 0.80; 95% CI, 0.69–0.93; P=.0031) and all-cause mortality (HR, 0.89; 95% CI, 0.86–0.92; P<.0001) than sulfonylurea users, as visualized in the Kaplan-Meier curves in Figure 2 and cumulative incidence curves in supplemental eFigure 2. The annualized total and drug-specific incidence rate of all-cause mortality and new-onset prostate cancer per 1,000 patients per year in the matched cohort are reported in supplemental eTables 6 and 7, respectively. 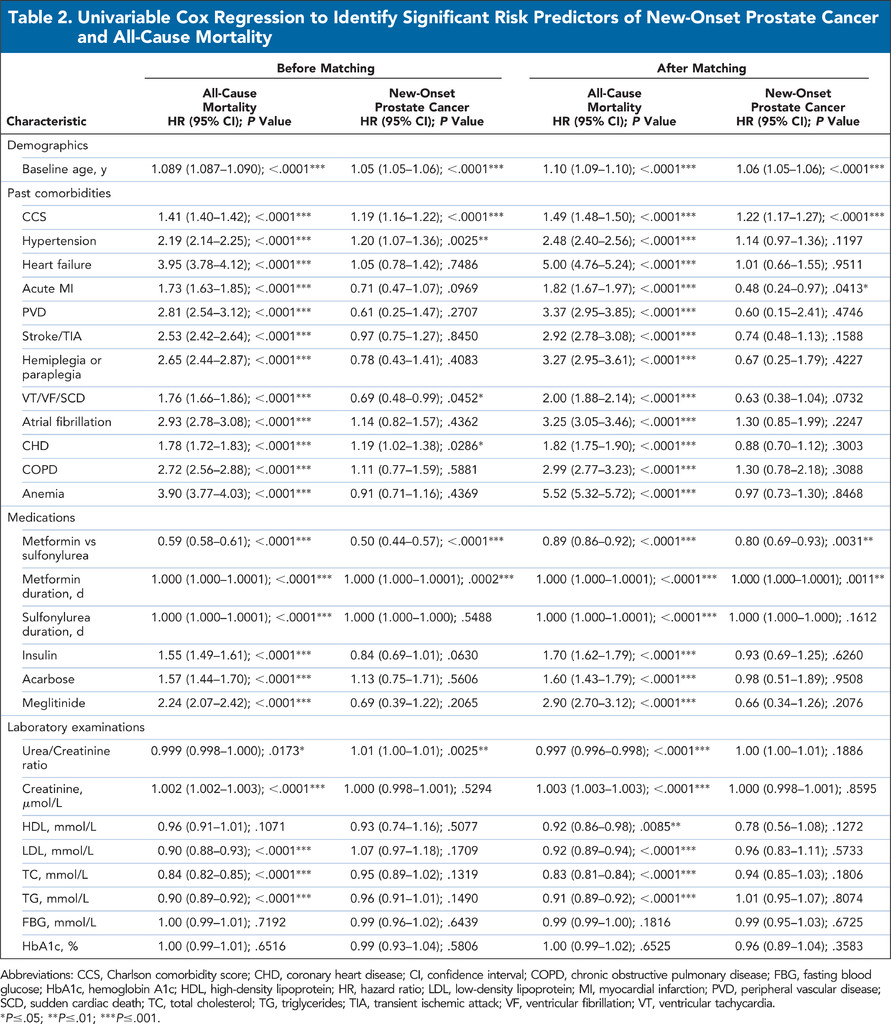 Sensitivity Analysis Based on Cause-Specific and Subdistribution Hazard Models

Subgroup Analysis by Use of ADT

In this population-based cohort study, we showed that long-term metformin use in male patients with T2DM was associated with significantly lower risks of new-onset prostate cancer and all-cause mortality than sulfonylurea use. In addition, such differences seemed to be stronger in younger patients.

Metformin and sulfonylureas are 2 of the most prescribed drugs for T2DM. Metformin is recommended as first-line therapy for its high efficacy, low cost, weight neutrality, and good safety profile.21 Sulfonylureas, compared with metformin, are associated with an increased risk of myocardial infarction and all-cause mortality.22 These findings have led to relegation of sulfonylureas in recent guidelines.23 This was accompanied by persistent increases in metformin prescriptions and decreases in sulfonylurea prescriptions both locally24 and internationally.25 Our findings suggest a further reason to discourage the use of sulfonylureas, particularly in the male population. We acknowledge that our findings contradict those of a recent study, which found that metformin use was not associated with any change in the risk of developing prostate cancer, although it has a selective protective effect against liver cancer.4 Nonetheless, the study included patients who, on average, had relatively low HbA1c levels, which may explain the low incidence of new-onset prostate cancer due to better glycemic control.5

AMP-activated protein kinase (AMPK) activation is the main mechanism by which metformin inhibits prostate cancer growth.26 AMPK arrests the cell cycle and cell growth by inhibiting the AKT/mTOR signaling pathway.27 Metformin not only activates AMPK and inactivates AKT but also inactivates p70S6 kinase, which is downstream of mTOR.28 Metformin’s antiproliferative effect in prostate cancer cells can also be AMPK-independent through acting on REDD1,29 an inhibitor of mTOR, and cyclin D1.30 In addition, metformin represses the COX-2/PGE2/STAT3 axes to inhibit castration-induced epithelial–mesenchymal transition in prostate cancer, which is closely related to drug resistance, tumor relapse, and metastasis.31 Inhibition of the GTPase Rac1 is a novel mechanism by which metformin reduces metastases in prostate cancer.32 Furthermore, it was reported that metformin treatment decreases c-MYC oncogene expression and the incidence of prostate intraepithelial lesion formation, and its proapoptotic effects are limited to malignant cells.33

Our study also found that the protective effect of metformin was stronger in patients aged <65 years. This may again be related to AMPK activity. In animal models, it was found that the sensitivity of AMPK activation is higher in young tissues.34 Age-related changes in the function of protein phosphatases (PP2A, PP2Cα, and Ppm1E) may be involved in suppressing AMPK signaling with aging.35–37 Furthermore, aging and aging-related disorders are associated with oxidative stress,38 which is heavily implicated in the development of prostate cancer.39 In prostate cancer, a supraphysiological concentration of reactive oxygen species is a hallmark of aggressive disease.40 In older adults with T2DM, oxidative stress and hyperglycemia can increase the formation of advanced glycation end products.41 When combined with elevated levels of reactive oxygen species, advanced glycation end products enhance the antiapoptotic nuclear factor-κB pathway.42

Research is underway to explore the role of metformin in the treatment of prostate cancer. ADT is the first-line treatment of prostate cancer, but many patients eventually do not respond well and develop castrate resistance.43 Metformin, when combined with ADT, is associated with improved survival in advanced prostate cancer.44 In addition, ADT can cause metabolic45 and cardiovascular consequences,46 and metformin is shown to ameliorate these adverse effects.47 Metformin may also be used as an adjuvant to chemotherapy because it reduces the dose necessary to prolong remission.48 As an adjuvant agent to radical radiotherapy, metformin may improve survival outcomes.49

Our study also highlights the importance of pharmacotherapeutic choice for patients with T2DM at high risk of prostate cancer. Although the antineoplastic effects of metformin have been widely studied, they are still not completely understood in different cancer types. More study is needed to determine the dose of metformin required to exert antitumor control in prostate cancer and whether it can be safely recommended in current practice.

The main strength of the present study was that a large and representative territory-wide database with long follow-up duration was used. Our findings are thus generalized and may broadly reflect the real-world practice in Hong Kong. In addition, sensitivity analyses based on different approaches were performed with consistent results, indicating that our findings were robust. However, some limitations are present. First, this study is an observational cohort study, and therefore residual confounding cannot be excluded. The possible presence of observational bias, coding error, and undercoding should be noted. Second, data about medication adherence are lacking due to the nature of these data.

Kaplan-Meier survival curves of (A) new-onset prostate cancer and (B) all-cause mortality, stratified by prescription of metformin versus sulfonylurea in the matched cohort. 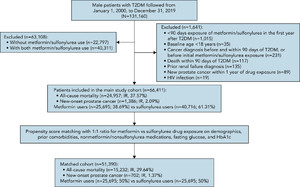 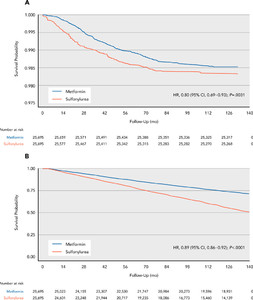