Survival outcomes of patients with histiocytic neoplasms are poor, with no standard-of-care treatments available for these malignancies. Recent characterization of the genomic landscape of various histiocytic neoplasms have shown a predominance of activating driver mutations within the MAPK/ERK pathway (ie, BRAF, MEK, KRAS, MAPK, and NRAS). Subsequently, successful treatment of these malignancies with BRAF and MEK inhibitors has been reported. This report presents the first patient with histiocytic sarcoma harboring a somatic KRAS Q61H mutation who was subsequently treated to a near complete response with the MEK inhibitor trametinib. Due to patient preference, lack of standard of care treatments, and associated morbidity from head and neck dissection, initial disease reduction provided by trametinib therapy allowed for a less morbid resection. This case report highlights the utility of up-front next-generation sequencing and the efficacy of MEK inhibition in patients with histiocytic sarcoma harboring activating KRAS mutations.

Histiocytic sarcoma (HS) is a rare hematologic malignancy with an overall incidence of 0.17 per 1,000,000 individuals and a poor overall survival of only 6 months.1 Contributing to the poor overall survival is the lack of available systemic treatments with no established standard of care. However, recent characterization of the genomic landscape of histiocytic neoplasms have revealed the role of the MAPK/ERK pathway activation in the disease pathogenesis, with frequent potentially targetable mutations.2 This report presents the first case of KRAS-mutated HS successfully treated to near complete remission with the MEK inhibitor trametinib.

A 69-year-old White man presented to his primary care office for a routine visit, at which time the medical provider discovered an enlarged right cervical lymph node. An initial CT of the neck showed multiple enlarged lymph nodes in the right neck and right base of tongue. Subsequently, the patient underwent a PET scan that showed a right-sided oropharyngeal mass measuring 1.5 × 1.9 × 3.0 cm with a standardized uptake value (SUV) of 54.1 (Figure 1A). Multiple right-sided cervical lymph nodes were noted involving nodal levels IIA, IIB, and III, with the largest being 2.9 cm and having an SUV of 45.6. No distant disease was visualized in the chest, abdomen, or pelvis. Results of a bone marrow biopsy showed normocellular marrow with trilineage hematopoiesis and no evidence of malignancy. Subsequently, an excisional biopsy of a level 2 right-sided cervical lymph node was performed. Pathology of the excised lymph node showed diffuse effacement of architecture by proliferation of atypical histiocytes with ample cytoplasm, oval to spindle nuclei with occasional grooves, and moderate pleomorphism (Figure 2A). Immunohistochemistry stains of the atypical cells were positive for CD68, S100, lysozyme, and CD163 (strong), but negative for CD20, CD21, CD35, CD30, HMB-45, Melan-A, MPO, AE1/3, CD1a, and Langerin (Figure 2B–D). Results of Epstein-Barr virus in situ hybridization were negative. These findings were consistent with a diagnosis of HS. Given that the patient had no other findings of malignancy on either PET/CT or bone marrow biopsy, his diagnosis was most consistent with primary HS.

The patient’s cervical lymph node biopsy was sent for genomic profiling testing using FoundationOne Heme (Foundation Medicine). Results of the genetic testing showed mutations in KRAS Q61H (variant allele frequency [VAF], 29.4%), PTEN D24G (VAF, 16.5%), and EPHB1 R327C (VAF, 14.5%). We presumed the KRAS mutation to be the oncogenic driver given its role in activation of the MAP/ERK pathway. Therefore, the patient was started on the oral MEK inhibitor trametinib at 2 mg daily. CT scan of the neck after 3 months of trametinib therapy showed resolution of the base of tongue lesion and most of the cervical lymph nodes. After 7 months of therapy, trametinib dose was decreased to 1.5 mg daily due to the patient experiencing grade 2 fatigue, peripheral edema, and acneiform rash. At 1 year of therapy with trametinib, the patient presented to a local emergency department with acute shortness of breath and tachycardia. A spiral CT showed multiple pulmonary embolisms in the third- and fourth-order pulmonary arteries in the right lung, and anticoagulation therapy was initiated. The pulmonary embolisms were attributed to the trametinib therapy, and therefore it was discontinued. Repeat PET/CT showed a residual right-level IIA cervical lymph node now measuring 1.5 × 1.6 cm with an SUV of 7.9 (previous SUV of 50.1), but resolution of all other cervical lymph nodes and base of tongue lesion (Figure 1B).

After a multidisciplinary discussion with the head and neck surgical oncology and radiation oncology teams, the patient underwent a transoral robotic surgery with base of tongue resection and right neck cervical lymph node dissection. Pathology results of the base of tongue lesion showed rare residual tumor cells within a background of extensive treatment-induced necrosis. Similarly, only 1 of the 18 lymph nodes was positive for a 4-mm focus of HS in a background of treatment effect/necrosis (Figure 2E, F). Therefore, both the PET and pathologic findings confirmed a near complete remission from frontline trametinib therapy. Subsequently, 45 Gy of radiation was delivered to the patient’s right neck and base of tongue as consolidative/adjuvant treatment. The patient remains alive without clinical or radiographic signs of relapse 31 months from initial diagnosis.

Other histiocytic diseases such as Langerhans cell histiocytosis and Erdheim-Chester disease have a reported high prevalence of mutations in the MAPK/ERK pathway.3,4 Although BRAF V600E mutation is the most common alteration in this pathway, mutations in MAP2K1, ARAF, NRAS, and KRAS have also been reported.2 In histiocytic sarcomas, KRAS gene mutations have been reported occasionally and mostly affect exons 2 and 3.5–7 Targeting intermediary proteins within the MAPK/ERK pathway, such as BRAF with vemurafenib, has shown sustained efficacy in various histiocytic neoplasms other than HS.8–10 However, data on efficacy of targeted therapy in malignant histiocytosis like HS are sparse. Recently, Gounder et al11 published a case report demonstrating efficacy of the MEK inhibitor trametinib in a patient with secondary HS harboring a MAP2K1-F53L mutation. Although there are no other reports in the literature of patients with KRAS-mutated HS treated with MAPK/ERK pathway inhibition, we postulated that trametinib therapy would be effective because our patient had a similar exon 3 KRAS gene mutation as previously reported.

Due to patient preference, lack of standard-of-care treatments, and associated morbidity from extensive base of tongue and neck dissection, trametinib therapy was initiated. Although trametinib treatment resulted in a durable response, the patient experienced multiple toxicities from treatment, including fatigue, peripheral edema, and acneiform rash, with eventual development of bilateral pulmonary emboli that resulted in treatment discontinuation. Given that a prior clinical trial has also demonstrated potentially higher rates of toxicity in patients with histiocytic neoplasms treated with targeted therapy than were previously observed in patients with metastatic melanoma,12 mitigation of trametinib toxicity through intermittent dosing could be considered for patients who have achieved a best response.13 Regardless, the initial disease reduction provided by trametinib treatment allowed us to perform a less morbid resection than would have been warranted at diagnosis. Furthermore, the patient is still alive and without signs of relapse 31 months from initial diagnosis, which exceeds most of the reported overall survival data for HS.1

There is a lack of efficacious treatment options for HS and related malignant histiocytosis. Our case report highlights the utility of up-front next-generation sequencing and the efficacy of MEK inhibition in patients with HS harboring activating KRAS mutations. There is a critical need to investigate novel, targeted therapies to improve outcomes in this aggressive malignancy.

Representative sections of the diagnostic excisional lymph node biopsy with (A) hematoxylin-eosin staining showing atypical histiocytes with ample cytoplasm and oval to spindle nuclei with occasional grooves and moderate pleomorphism. Immunohistochemistry was positive for (B) CD163 (strong), (C) CD68, and (D) S100, consistent with a diagnosis of histiocytic sarcoma. After treatment with >11 months of trametinib, pathology of a cervical lymph node dissection showed one lymph node having (E) diffuse necrosis at low power and (F) minute focus residual tumor at high power. 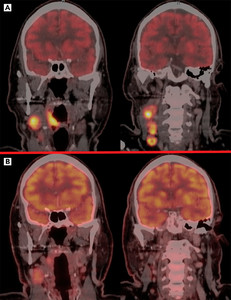 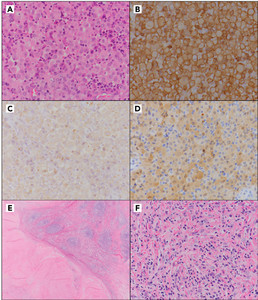