Treatment for metastatic HER2-negative breast cancer is becoming increasingly individualized as more of the tumor landscape is described and drugs are developed to target its pathways. Survival can be prolonged by CDK4/6 inhibitors in patients with hormone receptor–positive tumors and by immunotherapy in those with triple-negative disease. In patients with BRCA1/2 mutations, PARP inhibitors delay disease progression. Antibody–drug conjugates are expected to become critical components of the treatment landscape, and targeted drugs are proving to benefit small subsets of patients.

Metastatic HER2-negative breast cancer is a heterogeneous malignancy whose treatment is increasingly being individualized and therefore optimized, stated William J. Gradishar, MD, Chief, Division of Hematology and Oncology, and the Betsy Bramsen Professor of Breast Oncology, Northwestern University Feinberg School of Medicine; Director, Robert H. Lurie Comprehensive Cancer Center’s Maggie Daley Center for Women’s Cancer Care; and Chair of the NCCN Guidelines Panel for Breast Cancer, at the NCCN 2022 Annual Conference. For hormone receptor–positive tumors, CDK4/6 inhibitors have significantly improved survival. For PD-L1–expressing tumors, immunotherapy has been a game-changer. These established approaches are being joined by other targeted agents and antibody–drug conjugates in the pipeline, Dr Gradishar described.

“Looking at the landscape of estrogen receptor–positive breast cancer, in the NCCN Clinical Practice Guidelines in Oncology [NCCN Guidelines] for Breast Cancer, what’s strikingly different over the past 10 years is that rather than offering a group of monotherapy choices, the Guidelines are now populated with partners for endocrine therapy,” Dr. Gradishar said. In the first-line setting, this is predominantly CDK4/6 inhibitors. First-line trials of 3 CDK4/6 inhibitors in combination with aromatase inhibitors have consistently demonstrated a significantly and clinically relevant increase in progression-free survival (PFS), with data emerging of an overall survival (OS) benefit for ribociclib in the MONALEESA-7 trial (hazard ratio [HR], 0.712; P=.00973) and MONALEESA-2 trial (HR, 0.76; P=.004).1,2

The question now is whether the CDK4/6 inhibitor should be paired only with a nonsteroidal aromatase inhibitor or whether fulvestrant can be used. The PARSIFAL trial determined that the combinations have comparable efficacy, he said.3 “There is also a clear demonstration of incremental improvements even in the second-line setting with the addition of a CDK4/6 inhibitor,” he continued. Disease progression was reduced by approximately 50% with ribociclib, palbociclib, and abemaciclib versus endocrine therapy alone. Additionally, OS benefits are emerging.

Updated results from the PALOMA-3 trial, after 6 years of follow-up, showed median OS with palbociclib/fulvestrant versus fulvestrant alone to be 34.8 versus 28.0 months, respectively (HR, 0.81; P=.0221).4 Benefit was greatest among patients with no prior chemotherapy in the advanced-disease setting (HR, 0.72; P=.008) and those sensitive to prior endocrine therapy (HR, 0.76; P=.011). Although the presence of ESR1, PIK3CA, and TP53 mutations conferred shorter survival, these subsets benefited from addition of the CDK4/6 inhibitor.

Similarly, updated results from MONALEESA-3 showed a median OS of 53.7 months with ribociclib/fulvestrant versus 41.5 months with fulvestrant (HR, 0.726).5 Benefit was similar whether patients received the combination in the first- or second-line setting.

“I would say all these drugs, as a class, incrementally improved outcomes in the first- and second-line settings,” Dr. Gradishar said. Although as second-line therapy the numbers were most impressive with ribociclib, the pivotal MONALEESA-3, PALOMA-3, and MONARCH-2 trials enrolled somewhat different populations, potentially influencing the magnitude of the differences, he noted.

Still to be determined is the efficacy of re-treatment with CDK4/6 inhibitors after disease progression: Is there merit to continuing a CDK4/6 inhibitor, either the same drug or a different agent? This question is being addressed in the MAINTAIN, PACE, and TRINITI-1 trials (Table 1).

Approximately 40% of patients with estrogen receptor–positive disease harbor PIK3CA mutations. These mutations can be targeted by alpelisib, which was approved for PIK3CA-mutated hormone receptor–positive disease based a doubled PFS (HR, 0.65; P=.00065) in the SOLAR-1 trial.6 A recent update showed long-term disease control (median, 33 months) in 30% of patients,7 an effect that is similar to use of CDK4/6 inhibitors, he noted.

In patients with PIK3CA mutations, inhibitors could be useful (in combination with endocrine therapy) after disease progression on CDK4/6 inhibitors; based on findings from SOLAR-16 and the more recent phase II BYLieve trial, 50.4% of the same patient population were progression-free at 6 months.8 These studies support the continuation of endocrine therapy after disease progression with the incorporation of alpelisib, he said.

Oral selective estrogen receptor degraders (SERDs) are an emerging class of high-potency agents active against endocrine-resistant tumors, such as those harboring ESR1 mutations. As single agents in phase I trials, elacestrant, giredestrant, amcenestrant, and imlunestrant all produced responses in heavily pretreated patients.9–12 At least 6 SERDs are currently being evaluated as monotherapy or in combination with CDK4/6 inhibitors and other targeted drugs in the first-line metastatic, neoadjuvant, and adjuvant settings (Table 2).

Clinical Trials With Select SERDs as Monotherapy or in Combination 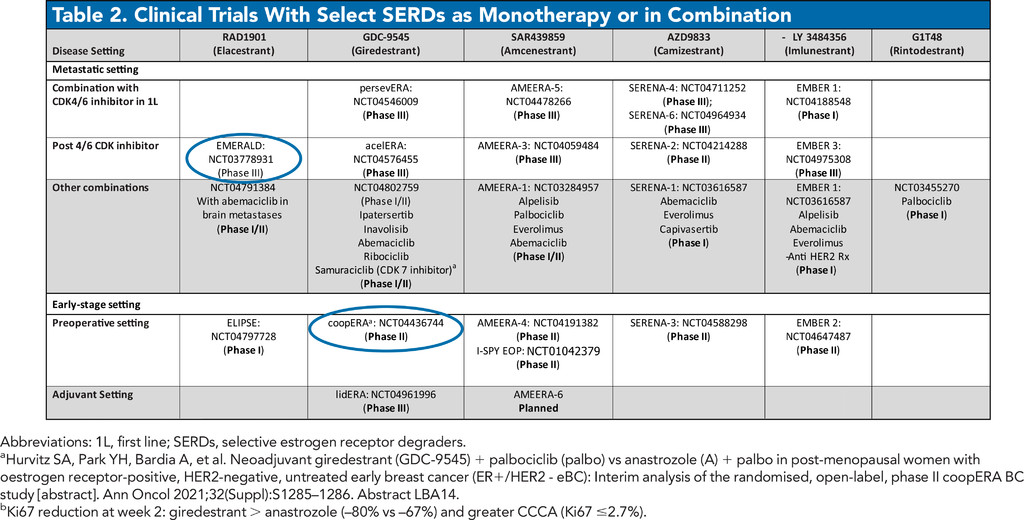 Evidence of the power of SERDs can be seen in the EMERALD trial. In this study, elacestrant was given to patients who had experienced disease progression on CDK4/6 inhibitors. Study results demonstrated that, compared with physician’s choice of therapy, elacestrant was associated with a 30% reduction in risk of disease progression or death in all-comers and a 45% reduction in patients with ESR1 mutations.13

KEYNOTE-355 and IMpassion130 established the benefit of checkpoint inhibitors in metastatic TNBC.14,15 Pembrolizumab is approved for PD-L1–positive disease. However, accelerated approval for atezolizumab was withdrawn by the manufacturer in August 2021. To select patients for treatment with pembrolizumab, the 22C3 assay provides a combined positive score (CPS), which is the total number of positive tumor cells and immune cells divided by the total number of tumor cells (x 100). KEYNOTE-355 found a CPS of ≥10 to be the threshold for defining those patients expected to benefit from pembrolizumab. In that group, treatment with pembrolizumab + chemotherapy resulted in a 4.1-month improvement in PFS (HR, 0.65; P=.0012) and a 6.9-month increase in OS (HR, 0.73; P=.0093). Subgroup analysis showed the treatment benefit was limited to patients with a CPS of ≥10.16

For patients with breast cancer, >80% of germline BRCA1/2 (gBRCA1/2) mutations are found in those with HER2-negative disease: both triple-negative and hormone receptor–positive. The PARP inhibitors olaparib and talazoparib are approved for this patient population based on the OlympiAD17 and EMBRACA18 trials, respectively.

For patients who have experienced disease progression on prior therapy, compared with physician’s choice of chemotherapy, both olaparib and talazoparib resulted in a significant increase in PFS (HR, 0.58 and 0.54, respectively). In OlympiAD, the greatest benefit—an 8-month gain in OS (HR, 0.51; P=.02)—was observed in patients without prior chemotherapy, suggesting that early use of a PARP inhibitor may have the greatest impact, Dr. Gradishar commented.

The push now is to identify settings beyond gBRCA1/2 mutations where PARP inhibitors may have value, such as in patients with somatic BRCA1/2 mutations and germline and somatic mutations in other homologous recombination pathway genes, such as PALB2. In a small study by Tung et al,19 responses to olaparib were observed in 50% of somatic BRCA1/2 mutation carriers and 82% of those with germline PALB2 mutations. “These mutations are not frequent. However, if you find these patients, a PARP inhibitor may be something to consider,” he said. “We can now make the case that more patients should be getting genetic testing.”

There is evolving recognition that approximately 35% of TNBCs have alterations in the PIK3CA/AKT1/PTEN pathway. Among the targeted drugs in development are the pan-AKT inhibitors ipatasertib and capivasertib, the pan-class I PI3K inhibitors copanlisib and pictilisib, and the dual PI3K/mTOR inhibitor gedatolisib.

Initial trials of the AKT inhibitors provided a mixed signal of efficacy. In the phase II PAKT2 trial, capivasertib + paclitaxel improved median OS from 12.6 months to 19.1 months (HR, 0.61; P=.04).20 This benefit was most pronounced in patients with PIK3CA/AKT1/PTEN-altered tumors, with a median PFS of 9.3 months with capivasertib/paclitaxel and 3.7 months with paclitaxel (HR, 0.30; two-sided P=.01). The AKT inhibitor ipatasertib in combination with paclitaxel similarly improved PFS (HR, 0.44; P=.041), with an encouraging OS, in patients with PIK3CA/AKT1/PTEN alterations in the LOTUS trial.21 This was followed, however, by disappointing results from the phase III IPATunity 130 study,22 where the PFS curves were superimposable and overlapping. Targeting AKT is currently being evaluated in the 800-patient phase III Capitello-290 trial of capivasertib (ClinicalTrials.gov identifier: NCT03337724).

One TROP-2–directed antibody–drug conjugate, sacituzumab govitecan-hziy, has been FDA-approved in this subtype based on the phase III ASCENT trial. In this study, the agent significantly improved PFS (HR, 0.41; P<.0001) and OS (HR, 0.48; P<.0001) versus standard chemotherapy.23 Benefit was seen regardless of the level of TROP-2 expression, age, or chemotherapy comparator.

A newer TROP-2–targeting compound is datopotamab deruxtecan, which was designed to have a high potency payload and optimized drug-to-antibody ratio. In the phase I TROPION-PanTumor01 study, datopotamab deruxtecan yielded a 34% response rate in relapsed or refractory disease, including among patients with prior treatment with sacituzumab govitecan.24

A new subset of TNBC includes patients with HER2-low expression, as defined by immunohistochemistry 1+ or 2+ and negative in-situ hybridization testing. It has been estimated that almost 7% of patients with breast cancer may have hormone receptor–negative/HER2-low tumors.

The antibody–drug conjugate fam-trastuzumab deruxtecan-nxki (T-DXd), which is useful in HER2-positive disease, appears active in patients with HER2-low disease, based on a phase Ib study in which more than one-third of patients responded.25 The DESTINY-Breast 04, 06, and 08 trials are evaluating T-DXd in HER2-low expressors (ClinicalTrials.gov identifiers: NCT03734029, NCT04494425, NCT04556773).

Approximately 40% of patients have PD-L1–positive tumors or a high tumor mutational burden and are therefore candidates for immunotherapy with pembrolizumab + chemotherapy. Approximately 10% have BRCA1/2 mutations, where a PARP inhibitor is indicated. The other 50% are eligible to receive sacituzumab govitecan or chemotherapy, or to enroll in a clinical trial. Future strategies will include new antibody–drug conjugates and strategies for augmenting the impact of immunotherapy, Dr. Gradishar said.

Although more and more drugs are becoming available for treatment in HER2-negative breast cancer, the aim is to better identify high-risk patients who need additional therapy, he said. Clinical trials aim to determine these patients and to evaluate strategies for de-escalating treatment in patients with a low risk of recurrence. Asked to cite the key updates to the NCCN Guidelines this year, Dr. Gradishar said, “We’re getting better at tailoring treatment.”

©2022 National Comprehensive Cancer Network, Inc. All rights reserved. These guidelines and this illustration may not be reproduced in any form without the express written permission of NCCN®. To view the most recent and complete version of these NCCN Guidelines, go to NCCN.org. 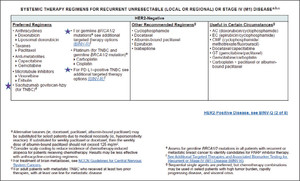