Pharmacogenetics in the Treatment and Supportive Care of Patients With Cancer

For patients undergoing treatment for cancer-induced pain, the identification and evaluation of pharmacogenetic variability may improve outcomes. Metabolism of opioids and other analgesic agents is influenced by patient-specific variables and drug–drug interactions, which often pose clinical challenges. Consultation with a clinical pharmacist or pharmacogenetics specialist is recommended to aid in the interpretation and evaluation of pharmacogenetic test results. The current NCCN Guidelines for Adult Cancer Pain provide pharmacogenetic considerations and recommendations for the treatment and supportive care of this population.

“Genetic variability is very challenging, and we have to work harder to try and identify what underlies responses [to interventions for cancer-induced pain],” commented David S. Craig, PharmD, Pharmacist Lead–Acute Pain/Supportive Care Medicine, Moffitt Cancer Center. At the NCCN 2022 Annual Conference, Dr. Craig presented pharmacogenetic considerations and related recommendations for the treatment and supportive care of patients with cancer.

Pharmacogenetics is defined as the science of understanding how genetic variability impacts responses to treatment. Although the terms “pharmacogenetics” and “pharmacogenomics” are often used interchangeably, they are different concepts: the former refers to a single genetic marker, whereas the latter refers to the entire genome.1

“[Pharmacogenetics] involves a whole host of things,” he commented. “This is [one] of the things that make the interpretation of pharmacogenetic testing more complicated.” Pharmacokinetics, which describes what the body does to a drug, and pharmacodynamics, which describes what a drug does to the body, vary among patients. Specifically, in terms of pharmacokinetics, the metabolic activity of the phase I CYP and phase II glucuronosyltransferase enzyme systems seems to be highly influenced by genetics.1

Factors that may influence responses to drug therapies include, but are not limited to, pharmacokinetics and pharmacodynamics, transporters, receptors, enzymes, and biologic sex.2–5 “These [factors] are just some places to start a discussion about what could be influencing patient responses,” Dr. Craig explained. “[It is] a very evolving field [with] a lot of good information, but there is also a lot that we do not know.”

The initial focus of pharmacogenetic research was outliers in drug response; however, according to Dr. Craig, this field is becoming more mainstream. Information regarding pharmacogenetic biomarkers is now included in 483 FDA drug labels; the FDA mandates baseline testing prior to the initiation of some of these agents.6

“Because of this interest [in pharmacogenetics], we’ve added a new section into the NCCN Clinical Practice Guidelines in Oncology [NCCN Guidelines] for Adult Cancer Pain,” Dr. Craig remarked (Figure 1). “We tried to take a very comprehensive but simplified approach on what to do for genetic testing, who should be tested, and what we [should be] looking for.”

The current NCCN Guidelines highlight some genetic alterations that may impact drug metabolism and drug–drug interactions, specifically in terms of opioids, nonsteroidal anti-inflammatory drugs (NSAIDs), and tricyclic antidepressants.7 Of note, metabolism of both codeine and tramadol seems to be highly influenced by CYP2D6 genetic variation; treatment with opioids that are not metabolized by CYP2D6, such as morphine, hydromorphone, and oxymorphone, is recommended as an alternative for individuals with known deficiencies in this pathway.

“Sometimes there is a workaround by using opioids, NSAIDs, or tricyclics that are not metabolized through that pathway,” Dr. Craig commented (Figure 2). “[That] is the clinical takeaway.” There are other commonly used agents—such as opioids (oxymorphone, hydromorphone), antidepressants (milnacipran), and NSAIDs (naproxen), which are less likely to have genetic influence than others within their respective drug class—that have the potential to be influenced by pharmacogenetic variation. Therefore, the FDA has provided recommendations for genetic testing, which should be referenced prior to prescribing supportive care drugs with pharmacogenetic associations.6

“We thought he had some genetic abnormalities in phase II metabolism,” Dr. Craig commented. “[Basically, we thought] he couldn’t make [the active metabolite of morphine] somehow, and that he was resistant to morphine both through OPRM1 and other mechanisms.” Genetic variations in COMT or the gene responsible for encoding P-glycoprotein also may be implicated.2,3,8–10

The second patient, a 38-year-old woman with appendiceal carcinoma, had previously undergone and tolerated oxycodone and acetaminophen therapy, and was admitted for an exploratory laparotomy. She was allowed 0.2 mg of intravenous hydromorphone every 10 minutes via patient-controlled analgesia, which seemed to have provided adequate postoperative pain control. As a result of surgical complications, including poor wound healing and fungal infection, the patient was administered 600 mg of fluconazole daily for 3 weeks. She was scheduled to be treated with 10 mg of oral oxycodone every 4 hours, as needed, and 650 mg of acetaminophen every 6 hours prior to discharge; however, she became somnolent, confused, and myoclonic after the first dose of oxycodone. The patient was then switched to 2 to 4 mg of oral hydromorphone every 4 hours as needed; unlike oxycodone, this agent avoids CYP3A4 and CYP2D6 metabolism.7 It seemed to be well tolerated, with good pain control and no identifiable adverse effects.

“We had hypothesized that the fluconazole was shunting more [oxycodone] away from CYP3A4 to CYP2D6, or she was not able to metabolize it,” Dr. Craig commented.11,12 “Her dramatic response from a single dose could have been enhanced by the presence of fluconazole.”

Who Should Undergo Pharmacogenetic Testing?

If baseline pharmacogenetic testing information is available, it should be reviewed and evaluated prior to making treatment decisions. The NCCN Guidelines recommend testing prior to prescribing tramadol, codeine, meloxicam, ibuprofen, celecoxib, doxepin, and amitriptyline.7 According to Dr. Craig, testing should also be considered before prescribing drugs identified by the FDA where data support pharmacogenetic associations, such as carbamazepine, citalopram, dronabinol, metoclopramide, phenytoin, venlafaxine, and oliceridine. Of note, in patients of Asian ancestry, the FDA strongly recommends baseline testing for the HLA-B *1502 allele prior to treatment with carbamazepine.6

Pharmacogenetic testing should be considered in patients with a personal or an immediate family history of gene abnormalities or deficiencies, as well as in those whose ancestors are from an ethnic group of known carriers. Testing is also recommended in patients who have experienced a failed response to various treatment options or developed toxicity after receiving a particular agent with no suitable alternatives. According to Dr. Craig, if cancer genetic testing is available or planned to be completed, it may be supplemented with testing for CYP2D6, CYP2C9, CYP2C19, HLA-A, and HLA-B.

Testing for CYP2D6, CYP2C9, CYP2C19, OPRM1, and COMT should be considered before using opioids. If administering nonopioid analgesics and adjuvants, testing for CYP2D6, CYP2C9, and CYP2C19 is recommended prior to treatment initiation. According to Dr. Craig, the Clinical Pharmacogenetics Implementation Consortium (CPIC) Guideline for CYP2D6, OPRM1, and COMT Genotypes and Select Opioid Therapy should be referenced after testing; much of the relevant information provided by this source is reflected in the current NCCN Guidelines.

© 2022 National Comprehensive Cancer Network, Inc. All rights reserved. These guidelines and this illustration may not be reproduced in any form without the express written permission of NCCN®. To view the most recent and complete version of these NCCN Guidelines, visit NCCN.org.

© 2022 National Comprehensive Cancer Network, Inc. All rights reserved. These guidelines and this illustration may not be reproduced in any form without the express written permission of NCCN®. To view the most recent and complete version of these NCCN Guidelines, visit NCCN.org. 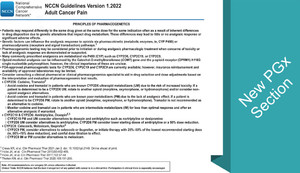 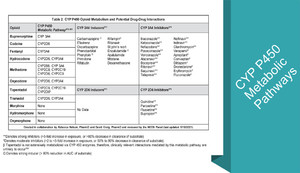