Background: Annual mammography is recommended for breast cancer survivors; however, population-level temporal trends in surveillance mammography participation have not been described. Our objective was to characterize trends in annual surveillance mammography participation among women with a personal history of breast cancer over a 13-year period. Methods: We examined annual surveillance mammography participation from 2004 to 2016 in a nationwide sample of commercially insured women with prior breast cancer. Rates were stratified by age group (40–49 vs 50–64 years), visit with a surgical/oncology specialist or primary care provider within the prior year, and sociodemographic characteristics. Joinpoint models were used to estimate annual percentage changes (APCs) in participation during the study period. Results: Among 141,672 women, mammography rates declined from 74.1% in 2004 to 67.1% in 2016. Rates were stable from 2004 to 2009 (APC, 0.1%; 95% CI, −0.5% to 0.8%) but declined 1.5% annually from 2009 to 2016 (95% CI, −1.9% to −1.1%). For women aged 40 to 49 years, rates declined 2.8% annually (95% CI, −3.4% to −2.1%) after 2009 versus 1.4% annually in women aged 50 to 64 years (95% CI, −1.9% to −1.0%). Similar trends were observed in women who had seen a surgeon/oncologist (APC, −1.7%; 95% CI, −2.1% to −1.4%) or a primary care provider (APC, −1.6%; 95% CI, −2.1% to −1.2%) in the prior year. Conclusions: Surveillance mammography participation among breast cancer survivors declined from 2009 to 2016, most notably among women aged 40 to 49 years. These findings highlight a need for focused efforts to improve adherence to surveillance and prevent delays in detection of breast cancer recurrence and second cancers.

Surveillance mammography is an integral component of survivorship care for women with a personal history of breast cancer to detect both local recurrences and new primary breast cancers. In contrast to screening guidelines for women of average risk, which vary across professional societies and guidelines committees,1 annual mammography is consistently recommended for breast cancer survivors, including by the American Cancer Society/ASCO,2 NCCN,3 and the American College of Radiology.4

Adherence to surveillance mammography guidelines is suboptimal and known to decrease with increasing time since diagnosis, from approximately 70% to 86% 1 year after diagnosis to 59% to 76% 3 to 5 years after treatment.5–9 Although many studies have evaluated predictors of mammography adherence by time since diagnosis, population trends in surveillance mammography participation by calendar year have not been well characterized. One recent study of annual surveillance among women aged 40 to 49 years in a Michigan commercial health plan observed a decrease in annual surveillance mammography between 2008 to 2009 and 2012 to 2013. This observed decrease was attributed to the concomitant revision in breast cancer screening guidelines to biennial screening for women at average risk by the US Preventive Services Task Force (USPSTF).10 Whether this decline is due to the guideline change or representative of national patterns or longer-term trends is unknown.

The purpose of this study was to better characterize overall and temporal trends in annual surveillance mammography utilization among breast cancer survivors using a national claims dataset spanning 13 years (2004–2016). We also evaluated whether trends differed by age, sociodemographic factors, and recent contact with healthcare providers.

We conducted a retrospective cohort study using a nationwide commercial and Medicare Advantage claims database including inpatient, outpatient, and pharmacy claims and enrollment and demographic information from 2004 to 2016 for members of commercial health plans residing in all 50 US states. We linked socioeconomic data derived from the 2008 to 2012 American Community Survey11 at the census tract level. The study was approved by the Harvard Pilgrim Institutional Review Board.

Our study cohort included women aged 40 to 64 years with evidence of a personal history of breast cancer diagnosed before or during the enrollment period based on ICD-9 and ICD-10 diagnosis codes (supplemental eTable 1, available with this article at JNCCN.org) in the medical claims. To ensure that our study population included prevalent breast cancer cases (diagnosed before enrollment) and incident cases (diagnosed during enrollment), we included diagnosis codes for breast cancer and personal history of breast cancer. Thus, each year of the study period included women with varying lengths of time since their breast cancer diagnosis and treatment. Each woman’s index date for cohort entry was defined as the date of the first inpatient or the first of ≥2 outpatient breast cancer diagnosis codes ≥30 days apart. We excluded women if they previously had (1) a bilateral mastectomy or 2 unilateral mastectomy claims (≥30 days apart) before the index date or (2) metastatic breast cancer using a previously developed algorithm,12 updated to include ICD-10 codes using Centers for Medicare & Medicaid Services 2018 General Equivalence Mapping (GEM) crosswalks.13 Women were censored when they had <13 months remaining in their enrollment, on the date of their first bilateral or second unilateral mastectomy, on the date of metastatic breast cancer diagnosis, or in the year that they reached age 65 years. For subgroup analyses, we identified women with incident early-stage breast cancer using a previously validated algorithm14 updated to include ICD-10 codes using 2018 GEM crosswalks (supplemental eTable 2).13

Demographic measures included age and US geographic region (West, South, Midwest, Northeast). Women were defined as residing in predominantly White, Black, or Hispanic neighborhoods when >75% of residents in their census tract were of the respective race; otherwise, women were classified as living in mixed-race neighborhoods.15 A superseding Hispanic or Asian categorization based on the E-Tech system (Ethnic Technologies) was merged at the individual level.16 We classified neighborhood poverty level based on percentage of the census tract below the federal poverty line,17 with ≥10% of residents below the federal poverty line considered “higher poverty.” We derived insurance deductible category ($0–$500, ≥$1,000, or other) using plan data from the vendor and a previously validated imputation algorithm.18 For each woman, we recorded the occurrence of an office visit with a surgeon or oncology specialist, an office visit with a primary care provider (PCP), or a breast surgery within the year preceding the observation interval (see supplemental eTable 1).

Mammography participation rates were standardized to the age, poverty level, race, and US regional distributions of women enrolled in 2014. We performed stratified analyses of annual surveillance mammography utilization by age group (40–49 vs 50–64 years), race, poverty level, geographic region, and deductible category (low vs high deductible) at the start of each observation interval. We also performed analyses stratified by receipt of breast surgery within 1 year before the start of the 13-month interval versus no surgery, by office visit with a surgeon/oncologist versus no specialist visit within the preceding year, and by visit with a PCP versus no PCP visit within the preceding year.

Joinpoint regression models19 were used to estimate average annual percentage changes (APCs) in surveillance mammography participation and to detect significant changes in APCs across our study period (Joinpoint Regression Program version 4.8.01; NCI).19 Significant changes were identified by performing permutation tests, with P values assigned using Monte Carlo methods using a significance level of 0.05 and 4,499 permutations.20 For each analysis, a maximum of 1 change in APC or joinpoint per time series was allowed, and ≥2 observations were required (excluding the first and last observations) before and after the joinpoint. Standard errors were precalculated in our data for each of the stratified time series. All analyses other than joinpoint analyses were performed in SAS Enterprise Guide, version 7.1 (SAS Institute Inc.). 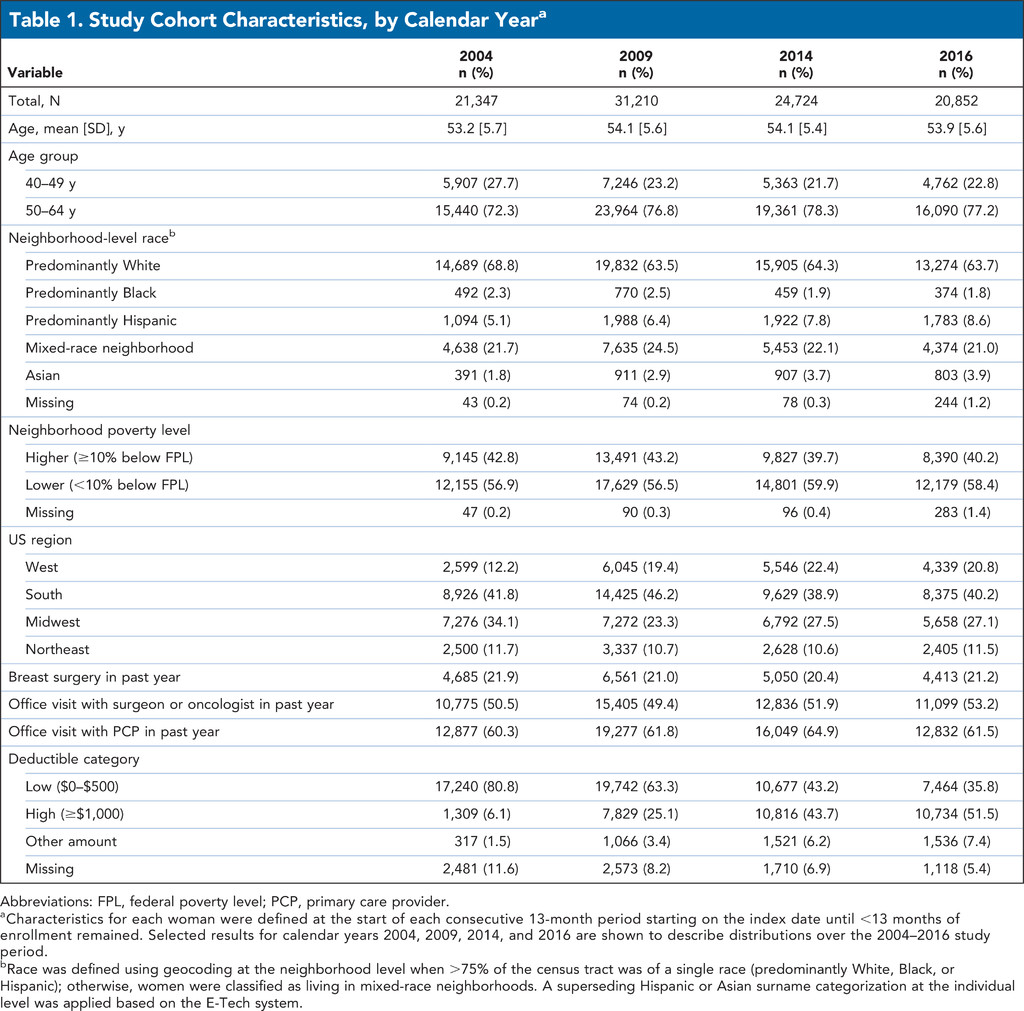 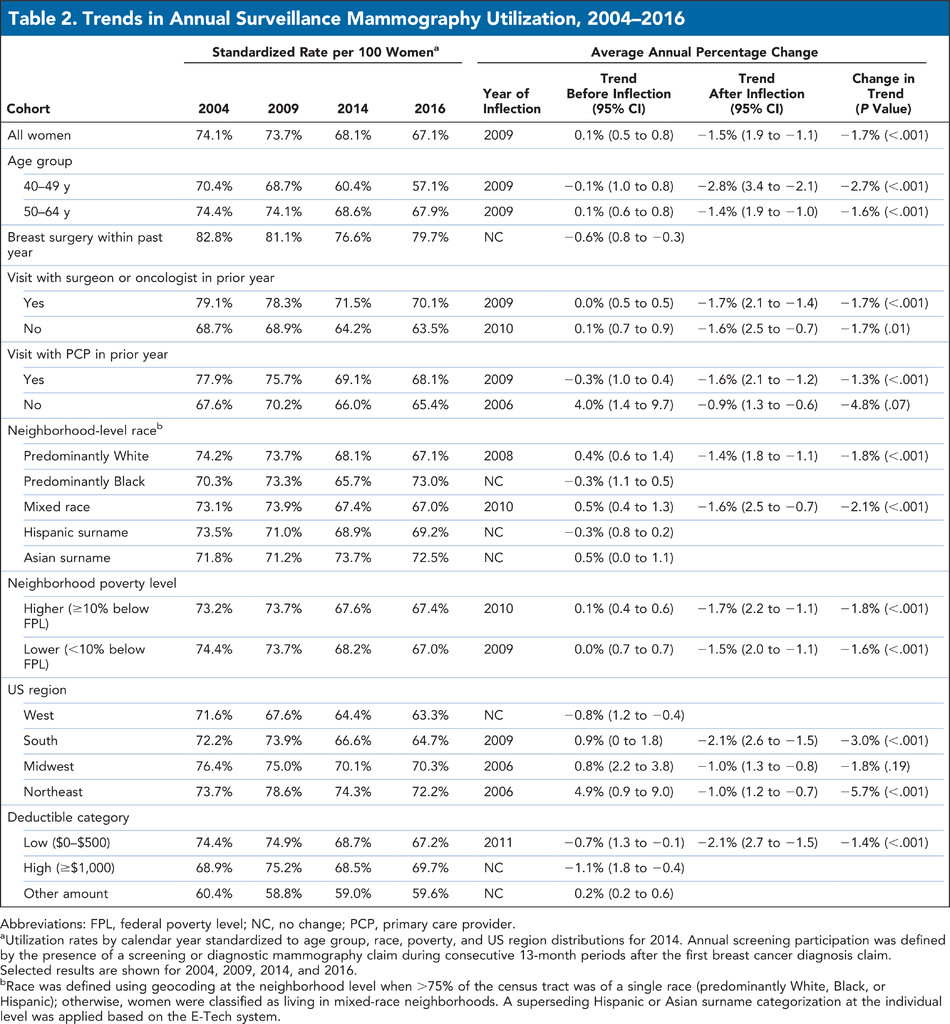 Trends by neighborhood-level poverty were similar those in the overall cohort (supplemental eFigure 2B). There was considerable variability in mammography utilization by region (eg, from 72.2% in the Northeast to 63.3% in the West in 2016); the year of inflection and degree of decline also varied (supplemental eFigure 3). Utilization among women with low deductibles ($0–$500) decreased over the entire study period, with a more pronounced decline beginning in 2011 (APC, −2.1%; 95% CI, −2.7% to −1.5%). No changes were detectable for women with higher deductibles (Table 2 and supplemental eFigure 4).

Surveillance mammography rates were higher among women with incident early-stage breast cancer (supplemental eTable 3) than among the overall cohort, but trends were similar (no detectable change from 2004 to 2008, followed by a 1.7% annual decline from 2008 to 2016) (supplemental eTable 4).

In this nationwide sample of commercially insured women aged 40 to 64 years with a personal history of breast cancer, annual surveillance mammography use declined by approximately 1.5% per year from 2009 to 2016 after a period of stable utilization from 2004 to 2009. This decline was observed in women across multiple healthcare and demographic factors, including those with recent engagement with the healthcare system. Women aged 40 to 49 years had the most notable decline, with mammography participation decreasing 2.8% per year after 2009.

Our results are consistent with a prior analysis of surveillance mammography utilization in women aged 40 to 49 years enrolled in a commercial health plan from 2008 to 2013 in Michigan.10 By including both a wide age range (40–64 years) and long study period (2004–2016), our study provides robust evidence of a more pronounced decline in mammography utilization across survivors beginning in 2009. The 2-fold decline observed among younger (aged 40–49 years) versus older survivors (aged 50–64 years) is particularly concerning, given the importance of surveillance in young women, who are more likely to have aggressive tumors and the greatest remaining life expectancy. Breast cancer diagnosis before age 50 years is also known to be an independent risk factor for local breast cancer recurrence,22–27 and declining adherence to surveillance could result in missed opportunities for early detection of breast cancer recurrence, potentially translating to poorer breast cancer outcomes.

Factors driving this recent decline in surveillance mammography are unclear. Across the study period, the percentage of survivors visiting a surgeon/oncologist ranged from 49% to 53%, suggesting that the decline in mammography participation does not reflect decreased engagement with oncology services overall. Mammography participation was generally higher among women who had a recent visit with a surgeon/oncologist or a PCP than among women without these encounters. However, even among women with recent surgeon/oncologist or PCP visits, participation declined by approximately 1.6% to 1.7% annually since 2009, suggesting that survivors who are otherwise engaged with the healthcare system have participated less in surveillance mammography over time. Whether these declines could potentially reflect changes in ordering patterns among providers is unclear and warrants further investigation.

The parallel declines in screening and surveillance mammography participation in recent years could be due at least in part to shifting perceptions of the benefits of mammography. Content analyses of news coverage of the revised USPSTF guidelines in 2009 have suggested that this coverage overly emphasized controversy about the value of mammography, at times inaccurately.31,32 More recently, widespread density notification laws (currently enacted in 38 states)33 have emphasized messaging to women about the limitations of mammography performance. Although well intended, this messaging may lead to increasing confusion about the value of mammography,34 particularly for survivors whose primary breast cancers were missed by screening mammography. However, the decline in surveillance imaging after 2009 persisted when we considered women who received either mammography or MRI, suggesting that this decline likely does not reflect the use of alternative imaging such as MRI as a substitute for mammography.

Adherence to surveillance mammography guidelines among breast cancer survivors has decreased since 2009, with the largest declines in survivors aged 40 to 49 years. Further work is needed to elucidate factors contributing to this decline, identify interventions to change its trajectory, and prevent adverse breast cancer outcomes.

Annual surveillance mammography rates for women with and without office visits with (A) a surgeon or oncologist or (B) a PCP within the preceding year. Trend lines modeled by Joinpoint are shown as solid lines. Observed rates are denoted by circles, with 95% confidence intervals indicated by shaded regions. 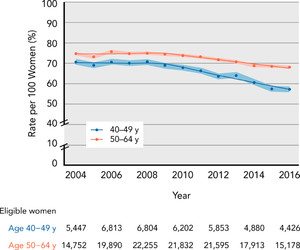 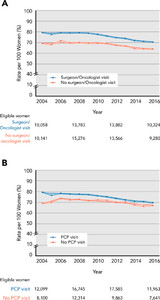