INTRODUCTION: Up to 40% of patients after axillary lymph node dissection (ALND) develop breast cancer related lymphedema (BCRL), which has significant medical, financial, and psychosocial implications. NCCN guideline recommends referral to lymphedema specialist for baseline limb measurements of both sides prior to surgery and early detection of lymphedema for optimal management. The goal of this study is to evaluate the rate of physical therapy (PT) assessment after ALND. Methods: Under IRB approval, we retrospectively reviewed those who underwent ALND at a NCCN member institution between 9/2017 and 12/2020. Patient demographics, treatment, and surgical characteristics, including prophylactic lymphovenous bypass (PLVB) were evaluated. Starting 2017, we began to perform PLVB at time of ALND using microsurgical technique. Data on PT attendance were collected for the pre-operative timepoint and for six post-operative timepoints up to two years. P-values were calculated with the chi-square, Fisher’s exact, Wilcoxon rank sum, and Kruskal-Wallis tests. Results: 503 patients underwent ALND; among them 223 (44.3%) had pre-op PT and 340 (67.6%) had at least one post-op PT appointment. The rate of post-op PT decreased over time: 231 (45.9%) patients attended at 3-month, 162 (32.2%) at 6-month, 103 (20.4%) at 9-month, 107 (21.3%) at 12-month, 92 (18.3%) at 18-month, and 49 (9.7%) at 24-month. Patients who underwent PLVB were significantly more likely to complete a pre-op PT appointment (84.2% PLVB vs 31.9% without PLVB) but completed fewer post-op PT appointments (p<0.0001) (Table1). Patients who received neoadjuvant chemotherapy or adjuvant radiation were more likely to have a pre-op PT appointment, while those who received either adjuvant chemotherapy (p=0.0038) or adjuvant radiation (p<0.0001) went to significantly more post-op PT visits. Breast reconstruction at the time of ALND had no effect on PT attendance. Patients attended more pre-op (p<0.0001) and post-op (p=0.0062) PT appointments in the latter years investigated by this study. Conclusion: There is a high rate of attrition over time among patients completing their post-ALND PT appointments. Although there has been improvement over time with PT rates, future research will need to focus on strategies to increase PT follow-ups for early detection and treatment of BCRL. 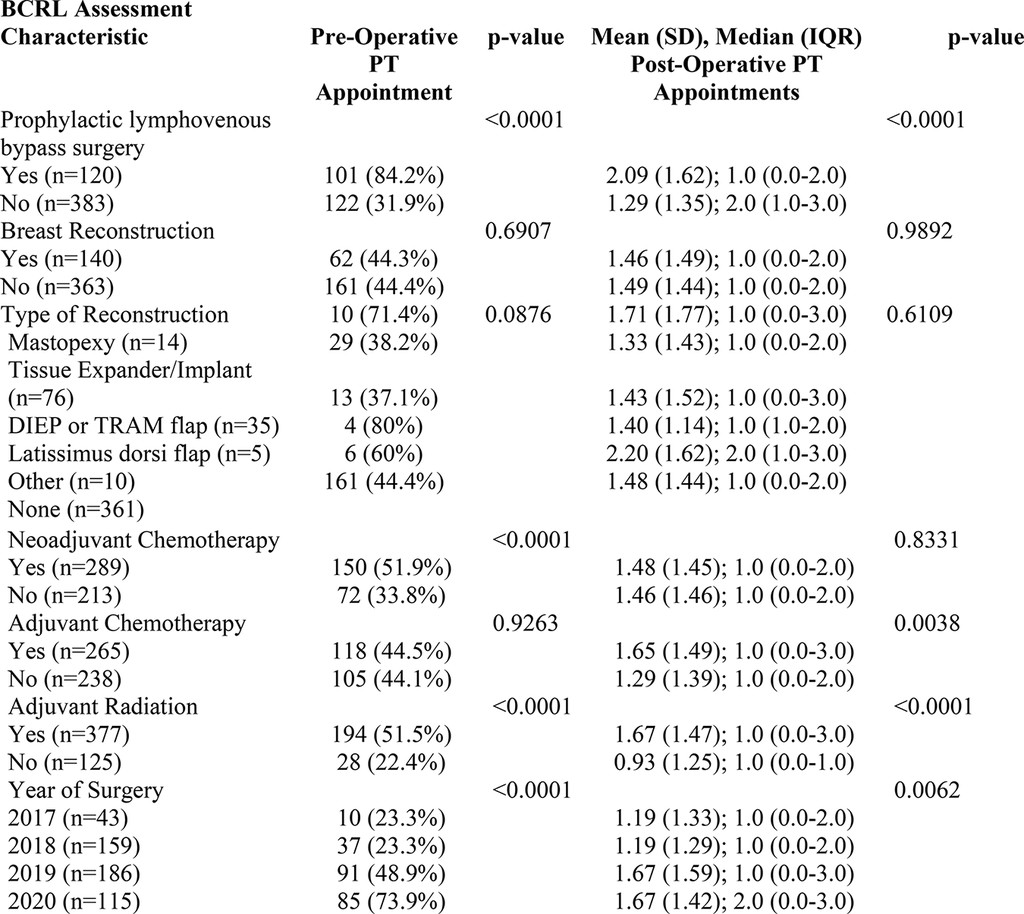