Background: Breast cancer is the most common cancer among young women. Also, the incidence has been rising in the past decades. Furthermore, younger women tend to have a more aggressive type at the diagnosis with a less favorable prognosis. Significant racial disparity in the incidence rate and outcomes has been documented in the literature. However, there has been limited data on the racial disparity in young women's breast cancer survival. We, therefore, sought to examine the differences in breast cancer-specific survival across the racial group in women age 40 or younger. Methods: We conducted a retrospective cohort study of patients diagnosed with breast cancer between 2010-2016 using data extracted from the United States Surveillance, Epidemiology, and End Results (SEER) database. We included all adult female patients aged 40 and younger diagnosed with primary breast cancer. We used the cox proportional hazard regression analysis to examine the association between mortality and other patient characteristics. The effects were expressed as hazard ratios (HR) and 95% confidence intervals (CI). Kaplan-Meier method was used to estimate cancer-specific survival across the racial groups. Results: This study included 21,646 women with a mean age at diagnosis of 36 (± 4 standard deviation (SD) years. Of these, 71.27% (n=15,428) were white, 15.31 % (n=3,314) were Black, 12.67% were Asian or Pacific Islander (n= 2,742), and 0.75% were American Indian/Alaskan Native (n=162). The median follow-up was 33 months (Interquartile range(IQR), 15-55 months). We found that Black women had increased risks of cancer-specific mortality (HR= 1.21, 95% CI 1.06-1.37) compared to white women. The mean breast cancer-specific survival was highest among the white 76.15 months (95%CI 75,84-77.02) and the lowest among the black women 72.15 months (95%CI 71.20-73.11). We also found that young Black women more frequently have poor prognostic factors than women in other racial groups. Furthermore, across all racial groups, Triple Negative, higher stage at the time of diagnosis, being uninsured, or having Medicaid, low socioeconomic status was associated with a high risk of cancer-specific mortality. Conclusion: The racial disparity in breast cancer-specific survival is evident. Further studies are needed to examine the factors that influence these disparities so a better understanding of these factors will facilitate the development of strategies to improve outcomes. 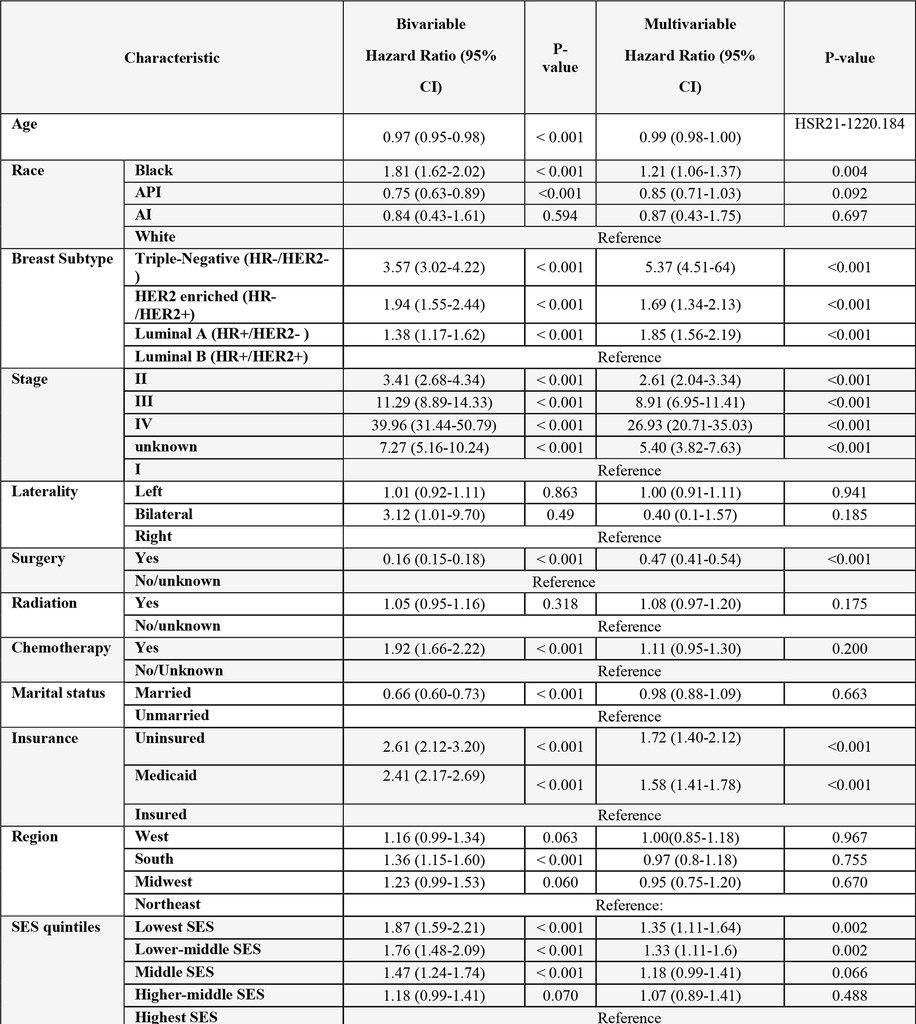 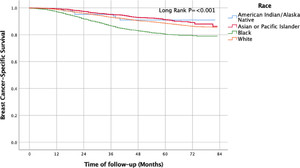