Aims: The purpose of this study was to use machine learning algorithms to build an effective, non-invasive and automated pipeline for grading and characterizing gliomas according to WHO 2016 classification. Material and Methods: Thirty-eight C11-PET scans of WHO II, III and IV grades were acquired from patients visiting the Department of Neuroimaging and Interventional Radiology of National Institute of Mental Health and Neuro Sciences (NIMHANS), Bengaluru. Through computational texture extraction, we extracted first-order, second-order and third-order features, tabulating 61 features totally. Normalizing the data using Standard Scaling and Label Binarizing, we developed a baseline prediction algorithm, which confirmed that our data was classifiable. Following this, we developed Linear SVC (support vector classifier), Gradient Boosting and Random Forest frameworks, and conducted a hyperparameter search for each of these classifiers to determine the ambient set of parameters for satisfactory functioning of the model. After tuning each of the models as per the hyperparameter search, we then calculated a number of scores for each model, with the most discriminative being ROC-AUC and accuracy. Results: In terms of ROC-AUC and accuracy, Gradient Boosting Classifier had the best performance (AUC = 0.94; Accuracy = 98.44%), compared to Random Forest (AUC = 0.81; Accuracy = 88.7%) and Linear SVC (AUC = 0.56; Accuracy = 52.1%). Furthermore, we found that RLM gray level non-uniformity was most indicative of a high-grade tumor (p = 0.041), while cerebral blood volume ratio (CBV) was found to be least indicative (p = 0.996). However, when distinguishing between Grade II and Grade III scans, all classifiers performed relatively poorly; even still, Gradient Boosting Classifier had the highest scores in all metrics (ROC = 0.74, accuracy = 73.6%). Furthermore, all classifiers were able to almost unilaterally distinguish between Grade II and IV, due to drastic differences in their textures and histological characteristics, as well as the relatively smaller sample of Grade II scans available in the dataset. Conclusion: It is clear that method of grading using Gradient Boosting Classifier is highly accurate, particularly in distinguishing Grade IV glioblastoma from Grade II and III gliomas. 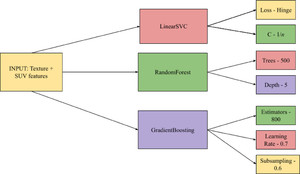 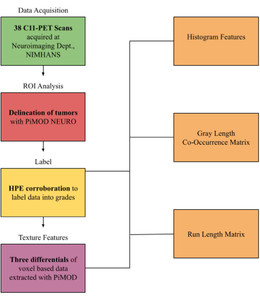 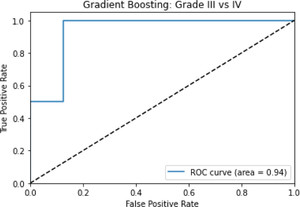 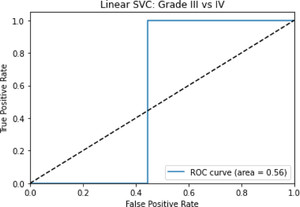 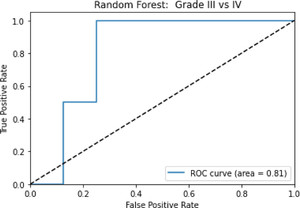