Intravascular lymphoma is a rare type of diffuse large B cell lymphoma (IVDLBCL). Common are signs of hepatosplenomegaly, constitutional symptoms, bone marrow infiltration, and hemophagocytosis in 77%, 76%, 75%, and 61% respectively. Neurological and cutaneous symptoms are prevalent in western variants. There is no male to female predominance. The median age of presentation of IVDLBCL is in the mid-60s and carries a poor prognosis. Three main variants have been described based on clinical presentation. Classical variant mainly involves multiple organs at the same time. The cutaneous variant is mainly limited to the skin. The hemophagocytic variant involves hemophagocytosis. In this report, we present a rare case of IVDLBCL presenting as worsening dyspnea and increased oxygen requirement. We present a 62-year-old lady who was admitted for evaluation of 1months history of worsening dyspnea and hypoxia initially confused as mold-related symptoms. Initial peripheral smear was significant for atypical lymphocytes, metamyelocytes with rare myeloblasts up to 1%; Mild anemia, mild thrombocytopenia, and Lactate Dehydrogenase of 2620 U/L. Hepatosplenomegaly, nodular liver and bilateral pulmonary infiltrates were seen on Ct scan. Liver and bone marrow biopsy confirmed the diagnosis of intravascular lymphoma by the presence of a CD 5 clonal B cell population. Flow cytometry was also done on peripheral venipuncture also showed the presence of a clonal B-cell population that is immunophenotypically similar to the patient’s recently diagnosed intravascular large B-cell lymphoma. The FISH study was negative for a double hit or triple hit mutation but was abnormal with 8q+ and 18q+. The patient was treated with only 4 cycles of Rituximab, Cyclophosphamide, Doxorubicin, Vincristine, and prednisone (R-CHOP) and a prophylactic dose of intrathecal methotrexate and is currently in remission for the past 4 months. In conclusion, intravascular lymphoma carries a bad prognosis and a high risk for relapse. In conclusion, intravascular lymphoma is a rare disease that makes early diagnosis and treatment challenging. Hypoxia and dyspnea are not reported in literature as presenting symptom. Lung involvement is not clearly described as well. High suspicion for the disease should be raised with unexplained multi-organ dysfunction. While most patients present in advanced stages, early diagnosis and treatment can be beneficial to prevent extensive progression and possible remission. 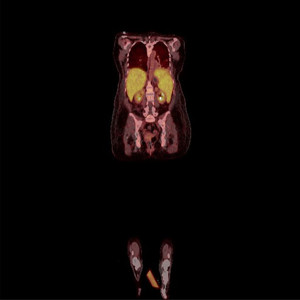