CGE22-095: CCND1 Amplification in Pancreatic Ductal and Ampullary Adenocarcinoma and Its Impact on Patients’ Survival: A Single Centre Observational Study

Background: Studies conducted worldwide in the last few decades have demonstrated that, various high and low frequency inherited and somatic mutations play important roles in the pathogenesis of periampullary carcinoma. Owing to relatively inaccessible location and lack of specific early diagnostic signs, majority of periampullary tumours are difficult to manage. Limited chemotherapeutic options that are available are highly toxic and not very efficacious. CyclinD1, if found to be amplified in these malignancies, might become an important gene tor targeted monoclonal antibody therapy. Aims and Objectives: Objective of our study is to analyse the extent of amplification of CyclinD1 gene in patients with periampullary carcinoma and to observe its correlation with survival of patients. Methodology: An analytical retrospective-prospective study was done on 35 patients of operable periampullary carcinoma, in Medical College, Kolkata from January 2019 to July 2020. After isolating DNA from tumour and corresponding normal tissue by Qiagen DNEasy kit, CyclinD1 amplification was assessed by RT-PCR using Taqman DNA copy number in the laboratory of Indian Statistical Institute. Survival analysis was done by Kaplan-Meier estimator and all statistical calculations performed through SPSS software. Results: The age and sex distributions of study population were similar to that of world data. 6 (17%) out of 35 patients were found to have >2 fold amplifications of CyclinD1 gene. However, no positive correlation was found between CyclinD1 amplification and overall survival of the patients (p value 0.21) (Figure 1). Conclusion: Positive correlation was not found in our study between CCND1 amplification and periampullary malignancy. However, in a single large study conducted in Japan by Yamazaki showed reduced survival and higher metastasis in CyclinD1 positive periampullary carcinoma. So there is reasonable scope for future large scale population based or multicentre studies to establish similar association in our subcontinent as well. 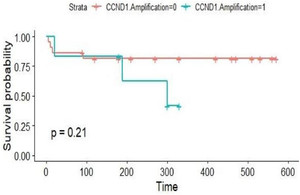