Fewer than 5% of patients participate in clinical trials, and because of strict inclusion criteria these patients are often younger and in better physical condition compared with those seen in daily practice.12 Consequently, survival estimates from clinical trials are often unrepresentative of daily practice in contrast to population-based studies, which provide a complete representation of all patients.13,14 A previous Dutch population-based study reported no change in median survival for patients with metastatic gastric cancer between 1990 and 2011.15 For metastatic esophageal cancer, an improvement in median survival of 4 weeks was reported between 1989 and 2014.16 These population-based studies are from a number of years ago, and novel treatments have become available since.4,8 Furthermore, these studies focused on median overall survival (OS) or survival estimates after a certain number of years, in which a large range in survival is unrepresented. To explore survival beyond single-point estimates, the calculation of survival for multiple percentiles is valuable. Percentiles of the survival curve represent the period survived by a certain percentage of patients: for example, the 10th percentile (p10) represents the top 10% of patients with the best survival. Percentiles can be referred to as survival scenarios: best-case (p10), typical (p25–p75), and worst-case scenarios (p90).17,18

To investigate whether advances in treatment have been beneficial and for which proportion of patients, we assessed trends over time regarding the best-case, typical, and worst-case survival scenario of patients with metastatic esophageal or gastric cancer in a population-based study. Furthermore, to place survival in perspective of the treatment landscape, trends in treatment are described.

Patients with synchronous metastatic esophageal (ICD-O-3 codes: C15.0–C15.9), gastroesophageal junction/cardia (C16.0), or gastric cancer (C16.1–C16.9) diagnosed between 2006 and 2020 were selected from the Netherlands Cancer Registry.19 This registry serves the total Dutch population and is based on notification of all newly diagnosed malignancies by the national automated pathology archive. Additional information on diagnosis, stage, and treatment is extracted from medical records by data managers. Information on vital status was available through the linkage of the Netherlands Cancer Registry with the Dutch Personal Records Database and updated until February 1, 2022.

Patients diagnosed between 2006 and 2009, 2010 and 2016, and 2017 and 2020 were staged according to the sixth, seventh, and eighth editions of the IUCC TNM Classification of Malignant Tumours, respectively.20–22 All patients with metastatic disease (cM1) were included, with the exception of those diagnosed as cM1a according to the sixth edition. The vast majority of these patients had a distal esophageal tumor with celiac lymph node metastases, which are regional lymph nodes (cN+) instead of extraregional lymph nodes (cM1) in the seventh and eighth versions.

Characteristics were noted with frequencies and percentages or mean and standard deviation. OS was assessed from the date of diagnosis until death or end of follow-up. OS was calculated for patients with esophageal and gastric (including gastroesophageal junction/cardia) cancer stratified by year of diagnosis and further stratified by treatment and histology (esophageal cancer only). A sensitivity analysis was performed for gastric cancer stratified by peritoneal metastases, because since 2016 a staging laparoscopy and FDG-PET/CT have been advised in patients with locally advanced tumors.23 Staging laparoscopy improves the staging of M+, mostly for peritoneal metastases.24 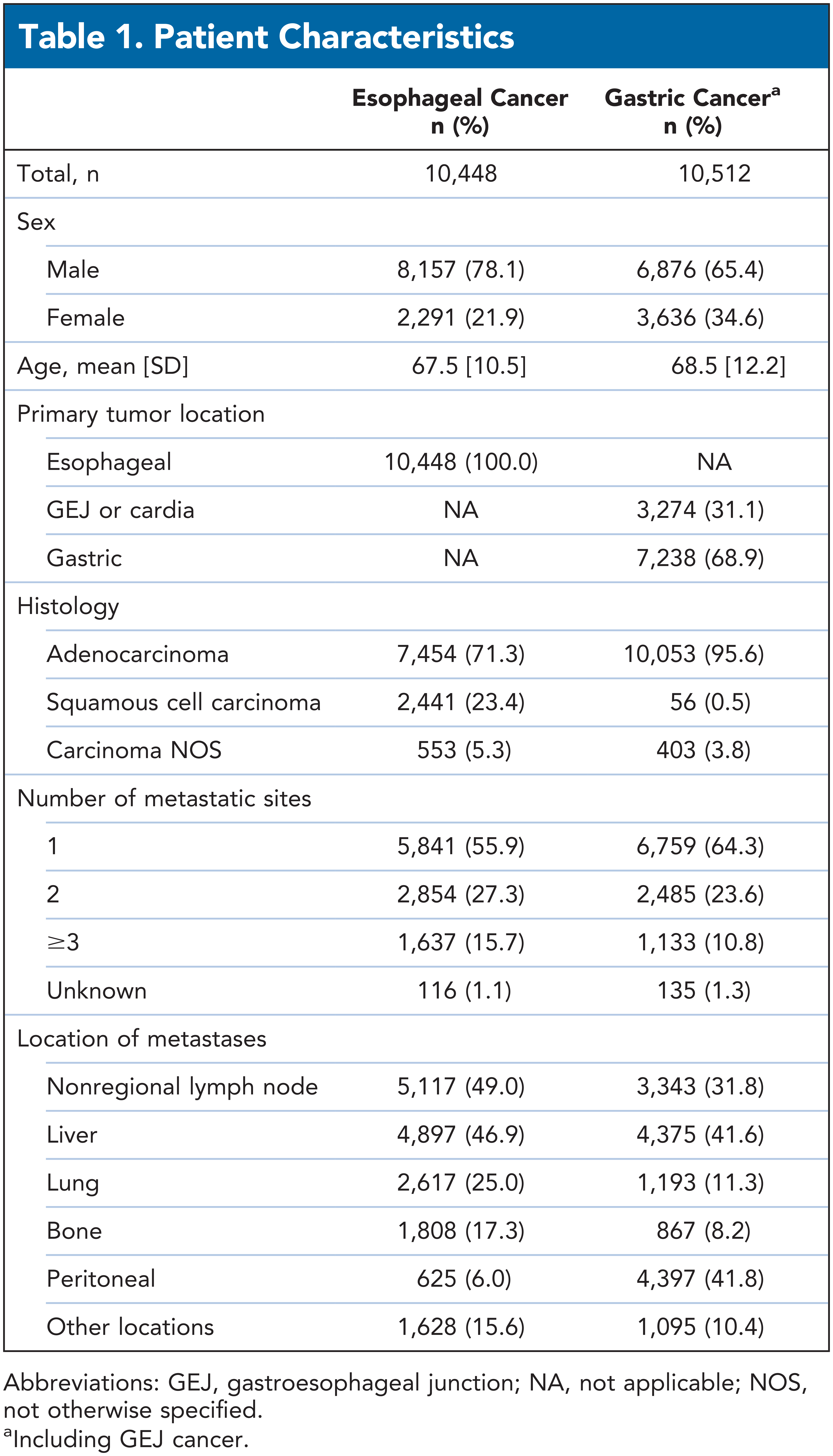 For esophageal cancer, the use of systemic therapy increased among patients with adenocarcinoma (from 29% in 2006 to 48% in 2020; P<.001), although not among those with squamous cell carcinoma (from 25% to 20%; P=.88) (supplemental eFigure 1, available with this article at JNCCN.org). Among patients with esophageal squamous cell carcinoma, the use of chemoradiotherapy increased from 3% to 13% (P<.001). 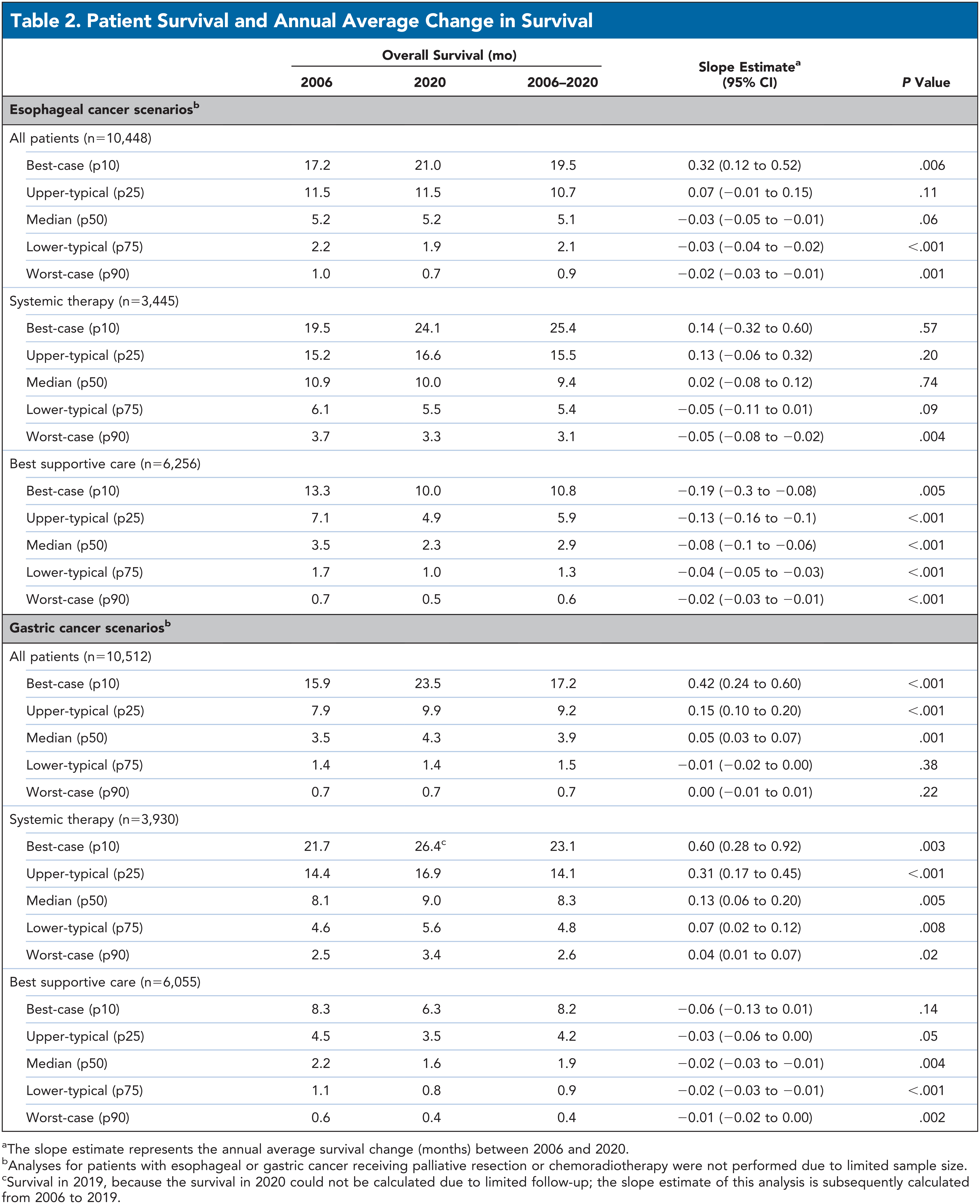 For patients with gastric cancer receiving systemic therapy (n=3,930), survival for all scenarios improved, with the highest improvement for the best-case scenario (average increase of 0.60 months per year from 21.7 to 26.4 months; measured until 2019 because survival in 2020 could not be calculated due to limited follow-up). For patients with gastric cancer receiving BSC (n=6,055), survival for all scenarios decreased except the best-case scenario, which remained unchanged.

In this population-based study, an increase in survival for the best-case scenario (p10) among patients with esophageal cancer and for the best-case scenario (p10), upper-typical scenario (p25), and median (p50) among patients with gastric cancer was observed between 2006 and 2020. Use of systemic therapy and chemoradiotherapy increased for esophageal cancer and use of systemic therapy increased for gastric cancer between 2006 and 2020. Clinicians may use outcomes of the best-case, typical, and worst-case scenarios as a prognostic basis to explain life expectancy to patients, which is more helpful than solely providing the median survival.

In our study, the percentage of patients with gastric cancer receiving systemic therapy increased from 28% to 42% and median survival increased by 0.8 months between 2006 and 2020. An increase in the use of systemic therapy was previously reported from 5% in 1990 to 36% in 2011; however, the study did not report an increase in median survival.15 Another Dutch population-based study reported an increase in median survival of 2.0 months for patients receiving systemic therapy between 1999 and 2017.30 Observed survival improvements are probably the result of the availability of targeted agents, such as the improvements seen in the ToGA trial (2011) for trastuzumab and the RAINBOW trial (2016) for paclitaxel and ramucirumab.4,8

Among patients with gastric cancer receiving systemic therapy, the survival benefits were largest in the best-case (p10; 4.7 months; until 2019) and upper-typical scenarios (p25; 2.5 months). The ToGA trial reported a survival improvement of 2.7 months and the RAINBOW trial reported an improved survival of 2.2 months.4,8 These findings indicate that survival improvements observed in clinical trials only translate to a minority of patients in clinical practice (ie, approximately the top 25% of patients). Not all patients are eligible for treatment with trastuzumab; only approximately 15% to 25% have an HER2-positive tumor.31 Similarly, approximately 25% of patients proceed to second-line treatment in clinical practice.11 In addition, a small proportion of patients respond extremely well to trastuzumab, which can result in long-term survival of several years.32,33 Survival outcomes are likely to improve in the near future; recent trials showed positive results for trastuzumab deruxtecan in previously treated HER2-positive gastric cancer and dual blockade of PD-1 and HER2 in first-line treatment.34,35

For patients with esophageal and gastric cancer receiving BSC, survival of those in the worst-case scenario (p90) was extremely poor at <1 month. This finding underscores the low probability of clinically meaningful treatment options in this population and the need for integrated advanced care planning.36

Our study shows a large variation in survival across the scenarios. Currently, it is unclear which factors determine how patients respond to systemic therapy, and it is unknown whether a patient will have a poor or good response (ie, which scenario will represent the survival). Therefore, clinicians should discuss survival according to multiple scenarios to better explain life expectancy to patients.17,18,37 Previous research in patients with advanced cancer showed that patients prefer the presentation of survival according to multiple scenarios rather than the median survival.37 Results from our study are useful for clinicians to inform patients of their life expectancy beyond the median OS. This information can be complementary to the use of clinical prediction models, such as SOURCE.38 Perhaps in the future, prediction models or identification of biomarkers will better identify which patients should receive systemic treatment or will have a good response on therapy.

For both gastric and esophageal cancers, improvements in the diagnostic process have likely contributed to stage migration from nonmetastatic to metastatic disease due to earlier detection and detection of smaller metastases.16,39 This is particularly true for peritoneal metastases, because a staging laparoscopy, which is essential for the diagnosis of metastases in the peritoneum, was added to the Dutch guidelines for gastric cancer in 2016.23,24,40 In our study, an increase in the presence of peritoneal metastases was observed for patients with gastric cancer between 2006 and 2020, in line with previous research.30 However, before 2016, the percentage of patients diagnosed with peritoneal metastases had already increased (from 31% in 2006 to 44% in 2015; not tested for significance), indicating that before the implementation of staging laparoscopy, peritoneal metastases occurred more frequently. This development could be related to improved diagnostics and expertise by pathologists over time. In addition, it could be related to the shift in the type of gastric cancer, in that the proportion of patients diagnosed with a diffuse type increased and those diagnosed with an intestinal type decreased between 1989 and 2015 in the Netherlands, and the diffuse type more often metastasizes to the peritoneum compared with the intestinal type.41,42

The strength of our study is the use of population-based data as opposed to clinical trial data. Population-based data include information on frail and older adult patients and patients with comorbidities, whereas patients in clinical trials are often younger and have a better performance status.13 In addition, outcomes of this study could probably be extrapolated to patients with (late) metachronous metastatic disease, because survival of these patients is similar to that of patients with synchronous metastatic disease.9

Our study has several limitations. First, reported point estimates of an individual year of diagnosis should be interpreted with caution because survival varied over the years, particularly for the best-case and worst-case scenarios because of the relatively small sample size. Second, the sample size of certain treatment groups was limited and therefore analysis was not performed. Third, information on performance status, comorbidities, and treatment details (type, dose, and duration) was unavailable. Finally, survival outcomes as presented in our study should not be used in treatment decisions due to the observational nature of our study.

In this study, survival improvements were not observed for most patients with metastatic esophageal or gastric cancer. However, at least an increase in survival was observed for patients with the best prognosis. By reporting survival according to multiple survival scenarios, we identified the proportion of patients who had the benefit of treatment advances over the past 15 years.

Treads of initial treatment in patients with metastatic (A) esophageal and (B) gastric cancers.a

P value represents the significance test for the linear trend analysis between 2006 and 2020.

aPatients with gastric cancer receiving chemoradiotherapy were excluded because this type of treatment was limited to ≤1% across all years.

Survival of patients with (A, C, D) esophageal adenocarcinoma or (B) esophageal squamous cell carcinoma for different scenarios over time, stratified by percentile (p) of survival. For patients with esophageal squamous cell carcinoma (B), the highest percentile (p10, best-case scenario) for 2020 could not be displayed because of limited follow-up time, and due to limited sample size, stratification according to type of treatment was not performed. 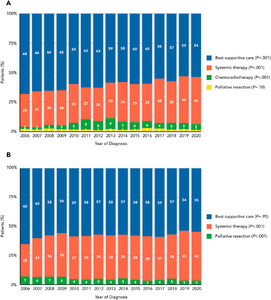 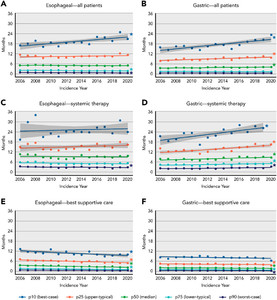 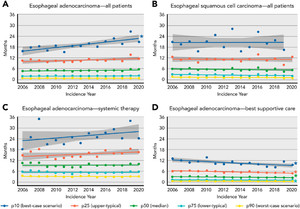