This NCCN Clinical Practice Guidelines in Oncology (NCCN Guidelines) for Pediatric Aggressive Mature B-Cell Lymphomas provide recommendations for the diagnosis and management of pediatric patients with PMBL and sporadic variants of BL and DLBCL. The NCCN Pediatric Aggressive Mature B-Cell Lymphoma Panel considers “pediatric” to include any patient aged 18 years and younger, and AYA patients =18 years and <39 years of age (as defined by the NCI) who are treated in a pediatric oncology setting.

The following discussion section includes the recommendations outlined in the NCCN Guidelines for the diagnosis and management of pediatric patients with PMBL.

PMBL usually presents as a bulky mediastinal mass in the anterior mediastinum (primary site of disease) with or without locoregional spread to adjacent organs such as chest wall, pleura, pericardium, and lung.7–9 Although extrathoracic dissemination to kidney or liver may occur, central nervous system (CNS) and bone marrow involvement are generally rare. Patients may also present with clinical symptoms related to rapid growth of a mediastinal mass (tumor lysis syndrome, superior vena cava syndrome, respiratory distress due to airway compression, pericardial and pleural effusions) and those with abdominal disease may present with abdominal distention and nausea/vomiting.7,9

Excisional or incisional biopsy of the most accessible site is preferred, with fresh biopsy tissue sent to pathology in saline to ensure viable diagnostic tissue (see PBCL-1, page 1268). Fine-needle aspiration biopsy alone is not suitable for the initial diagnosis of mature B-cell lymphomas.10 A core needle biopsy is not optimal but can be used when a lymph node or tumor mass is not easily accessible for excisional or incisional biopsy. Touch preparation of fresh tissue samples is recommended whenever possible to obtain essential cytologic details that may be difficult to detect in small core needle biopsy samples, and hematopathology review should be performed as clinically indicated.11

Immunophenotyping is essential for the differentiation of mature B-cell lymphoma subtypes and it can be performed using immunohistochemistry and flow cytometry (see PBCL-2, above). Cytogenetic or molecular genetic analysis may be necessary under certain circumstances to identify the specific chromosomal translocations that are characteristic of each subtype or to establish clonality.

PMBL expresses B-cell antigens and lacks surface immunoglobulin. PMBL is CD19+, CD20+, CD79a+, PAX5+, CD23+, and MUM1+ with a variable expression of BCL2 and BCL6.9 CD30 is heterogeneously expressed in more than 80% of cases. BCL2, BCL6, and MYC rearrangements are very rare. PMBL is almost always negative for EBV and the presence or absence of EBV is useful to differentiate PMBL from other mediastinal lymphomas with overlapping pathologic features.

Gene expression profiling has shown that adult PMBL has molecular features that overlap with classic Hodgkin lymphoma and the biology of pediatric PMBL has also been reported to be similar to that of adult PMBL.13–16 Genetic alterations involving the major histocompatibility complex class II transactivator gene at chromosome 16p are highly recurrent in PMBL.17,18 Gains or amplifications in chromosome 9p24 (including JAK2, PD1, and PD2) and chromosome 2p16 (including REL and BCL11A) have also been detected in PMBL.19–24

Workup for patients with a diagnosis of PMBL includes history and physical examination, laboratory analysis, bilateral bone marrow aspirate and biopsy, lumbar puncture, and imaging. Imaging should include cross-sectional scans of the neck, chest, abdomen, and pelvis (see PBCL-3, page 1270). FDG-PET/CT or FDG-PET/MRI is recommended if available.25 However, treatment should not be delayed to obtain this scan, and FDG-PET does not exclude the need for full diagnostic quality, high-resolution CT or MRI. Information regarding bone marrow and CNS involvement and distant spread is important for staging.

In addition, a baseline echocardiogram or multigated acquisition scan, and electrocardiogram is recommended, and fertility counseling should be offered with fertility preservation as clinically appropriate.

Historically, pediatric patients with PMBL enrolled in prospective clinical trials of pediatric mature aggressive B-cell lymphomas have been treated with same protocols used for BL and DLBCL (dose-intensive multiagent chemotherapy regimens and intrathecal therapy for CNS prophylaxis). However, outcomes in the subset of patients with PMBL differs from those of BL and DLBCL, with reported 5-year event-free survival (EFS) rates of 66%–70%.26,27

The French LMB2001 prospective study evaluated intensive LMB-based chemotherapy (based on the FAB/LMB96 protocol) in pediatric patients with PMBL (42 of 773 patients with newly diagnosed B-cell NHL had PMBL).28 All patients received prephase COP followed by 4 to 8 courses (induction, consolidation, and maintenance) of chemotherapy, and rituximab was added to chemotherapy after 2008. In 2010, the protocol was modified to recommend 6 courses of LMB-modified chemotherapy (B/C) with rituximab for all patients (2 induction courses of R-COPADM followed by 2 consolidation courses of R-CYVE [rituximab, cytarabine, and etoposide] and 2 courses of maintenance therapy [vincristine, cytarabine, doxorubicin, prednisone, and rituximab]). The cumulative dose of doxorubicin was limited at 240 mg/m2. The median follow-up was 7 years (11 years for patients treated without rituximab and 6 years for those treated with rituximab). The 5-year EFS and OS rates were 88% and 95%, respectively, for the whole population. This study also showed that the addition of rituximab to chemotherapy improves the outcome (not based on a randomized comparison but based on a comparison of 2 periods using different intensity chemotherapy). The 5-year EFS rate was 95% with rituximab and 81% without rituximab. The corresponding 5-year OS rates were 100% and 91%.

In a multicenter retrospective analysis of 156 children and adults with PMBCL treated with dose-adjusted EPOCH-R, with a median follow-up of 23 months, the estimated 3-year EFS and OS rates were 86% and 95%, respectively.31 The outcomes were not statistically different between pediatric and adult patients in terms of both EFS (81% vs 87%; P=.338) and OS (91% vs 97%; P=.170). Thrombotic complications were more in common in pediatric patients (46% compared with 23% in adult patients; P=.011). Another analysis that compared outcomes for pediatric patients with PMBL from 3 different trials also reported that modified dose-adjusted EPOCH-R (with at least one dose of intrathecal therapy and cumulative dose of doxorubicin limited at 360 mg/m2) resulted in a superior 5-year EFS rate (84%) compared with intensive chemotherapy regimens used in the B-NHL-BFM-04 (59%; P=.016) and NHL-BFM 95 (39%; P<.001) trials.32 The corresponding 5-year OS rates were 90%, 72%, and 70%, respectively.

A more recent multicenter single arm prospective phase II study involving 46 pediatric patients with PMBL showed that dose-adjusted EPOCH-R did not improve EFS compared with survival rates from the FAB/LMB 96 study (discussed previously).33 After a median follow-up of 59 months, the 4-year EFS and OS rates were 70% and 85%, respectively. Although the EFS rates were not better in this study, dose-adjusted EPOCH-R had a favorable toxicity profile (≥grade 2 adverse cardiac events occurred in only 9% of patients). In this study, adherence to dose-intensity was not followed in 29% of patients. These results are in contrast to the EFS and OS rates for dose-adjusted EPOCH-R reported in the aforementioned analyses,31,32 and the survival rates reported in this phase II study are also inferior to those reported in the LMB2001 prospective study (discussed previously).28

In the absence of data from randomized trials, optimal first-line treatment of patients with PMBL has not been established. Enrollment in a clinical trial is preferred for all patients. Based on the available data (as discussed previously), the following regimens are included as options for first-line therapy: dose-adjusted EPOCH-R (6 cycles)31,32 or R-CHOP (6 cycles)30 ± RT or LMB-modified B/C chemotherapy with rituximab (see PBCL-12, page 1271).28 There are not enough data on the use of RT in pediatric patients and RT was not part of the protocol for pediatric patients with PMBL. Definitive diagnosis may not be feasible before starting initial treatment. A short course of the COP regimen can be used while waiting to confirm the diagnosis of PMBL.

PET/CT at EOT is essential because residual mediastinal masses are common and negative EOT PET scan has been reported to be a prognostic indicator of improved survival outcomes.30,31,34 In the aforementioned multicenter retrospective analysis of 156 children and adults patients with PMBL, patients with a negative PET scan at EOT had improved 3-year EFS compared with those with a positive PET result (95% vs 55%, P<.001).31 In retrospective and prospective series of pediatric patients with PMBL, although PET/CT was used for response assessment after a few cycles of chemotherapy and at EOT, no treatment decisions were based on the results of PET/CT scans.28,31,33 In the LMB2001 study, response assessment was required after 4 or 6 courses of chemotherapy. At EOT, if PET/CT is positive or a large residual tumor remains, then biopsy and removal of the residual mass was recommended.28 A PET-adapted treatment approach was also used to identify adult patients for whom RT can be safely omitted, and only those with a PET-positive scan at EOT received RT.30 However, the role of RT in patients with a positive EOT PET remains undefined in pediatric patients due to the increased late effects of RT.16

The guidelines recommend response assessment at EOT with PET/CT. Routine clinical surveillance (as described subsequently) is recommended for patients with a complete response (CR) to initial treatment (negative PET; Deauville 1–3). Additional imaging studies (PET/CT or PET/MRI or chest CT) should be considered for patients experiencing less than CR (positive PET; Deauville 4–5). Patients experiencing less than CR to initial treatment should be managed as described for relapsed/refractory disease. Biopsy of PET-positive mass is recommended if additional treatment is contemplated.

In the vast majority of patients, relapse occurs within 18 months of diagnosis.34 Biopsy is warranted to confirm relapse before the start of treatment of relapsed/refractory disease because PET scans can show a fair number of false-positive results. History and physical examination are recommended every 3 to 6 months in the first 3 years, and then annually. Monthly monitoring of CBC with differential is recommended until counts are normal and then at each exam visit. Surveillance imaging (PET/CT, PET/MRI, or CT chest/abdominal/pelvis) should only be considered if there is a clinical suspicion of relapse.35 In addition, patients should be monitored for late effects of treatment as per the COG Survivorship Guidelines.

Very limited data are available regarding the outcome of pediatric patients with relapsed/refractory PMBL.38 Enrollment in clinical trials is recommended for all patients. R-ICE (rituximab, ifosfamide, carboplatin, and etoposide), R-DHAP (rituximab, dexamethasone, cytarabine, and cisplatin), pembrolizumab, and nivolumab are included as options for second-line therapy for relapsed/refractory PMBL (see PBCL-13, page 1272). Patients with a CR to second-line therapy should receive an autologous HCT. Allogeneic HCT is not considered an optimal approach. RT alone could be an option for local recurrence with disease restricted to the mediastinum.34

The NCCN Clinical Practice Guidelines in Oncology (NCCN Guidelines®) are a statement of evidence and consensus of the authors regarding their views of currently accepted approaches to treatment. Any clinician seeking to apply or consult the NCCN Guidelines is expected to use independent medical judgment in the context of individual clinical circumstances to determine any patient’s care or treatment. The National Comprehensive Cancer Network® (NCCN®) makes no representations or warranties of any kind regarding their content, use, or application and disclaims any responsibility for their application or use in any way.

The complete NCCN Guidelines for Pediatric Aggressive Mature B-Cell Lymphomas are not printed in this issue of JNCCN but can be accessed online at NCCN.org.

© National Comprehensive Cancer Network, Inc. 2022. All rights reserved. The NCCN Guidelines and the illustrations herein may not be reproduced in any form without the express written permission of NCCN.

At the beginning of each NCCN Guidelines Panel meeting, panel members review all potential conflicts of interest. NCCN, in keeping with its commitment to public transparency, publishes these disclosures for panel members, staff, and NCCN itself.

Individual disclosures for the NCCN Pediatric Aggressive Mature B-Cell Lymphomas Panel members can be found on page 1275. (The most recent version of these guidelines and accompanying disclosures are available at NCCN.org.)

The complete and most recent version of these guidelines is available free of charge at NCCN.org. 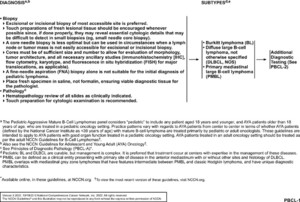 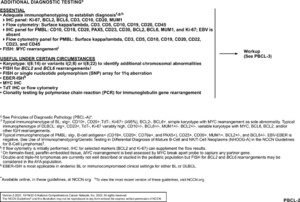 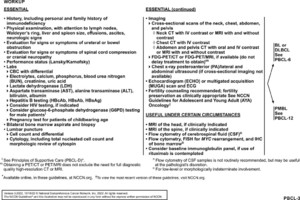 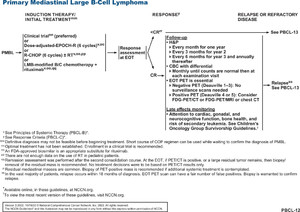 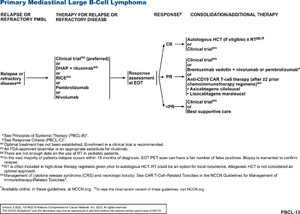