Background: The distribution of metastatic sites in upper tract urothelial carcinoma (UTUC) is not well-known. Consequently, the effects of sex and age on the location of metastases is also unknown. This study sought to investigate age- and sex-related differences in the distribution of metastases in patients with UTUC. Materials and Methods: Within the Nationwide Inpatient Sample database (2000–2015), we identified 1,340 patients with metastatic UTUC. Sites of metastasis were assessed according to age (≤63, 64–72, 73–79, and ≥80 years) and sex. Comparison was performed with trend and chi-square tests. Results: Of 1,340 patients with metastatic UTUC, 790 (59.0%) were men (median age, 71 years) and 550 (41.0%) were women (median age, 74 years). The lung was the most common site of metastases in men and women (28.2% and 26.4%, respectively), followed by bone in men (22.3% vs 18.0% of women) and liver in women (24.4% vs 20.5% of men). Increasing age was associated with decreasing rates of brain metastasis in men (from 6.5% to 2.9%; P=.03) and women (from 5.9% to 0.7%; P=.01). Moreover, increasing age in women, but not in men, was associated with decreasing rates of lung (from 33.3% to 24.3%; P=.02), lymph node (from 28.9% to 15.8%; P=.01), and bone metastases (from 22.2% to 10.5%; P=.02). Finally, rates of metastases in multiple organs did not vary with age or sex (65.2% in men vs 66.5% in women). Conclusions: Lung, bone, and liver metastases are the most common metastatic sites in both sexes. However, the distribution of metastases varies according to sex and age. These observations apply to everyday clinical practice and may be used, for example, to advocate for universal bone imaging in patients with UTUC. Moreover, our findings may also be used for design considerations of randomized trials.

Upper tract urothelial carcinoma (UTUC) represents a rare entity, as evidenced by its contribution to only 5% to 10% of urothelial cancers.1 Due to its rarity, no large-scale observational data are available to describe the distribution of metastatic sites in these patients, especially if age and sex stratifications are considered. Only 2 previous studies, which were based on 52 and 337 patients, respectively, addressed the distribution of metastatic sites.2,3 Shinagare et al2 found no difference in the metastatic pattern for different tumor stages, histologic groups, or locations. Dong et al3 assessed cancer-specific and overall survival according to metastatic site and found that surgical resection of the primary tumor might still lead to survival benefits for highly selected patients with metastases.

The importance of stratification according to age and sex has been suggested in other studies,4,5 but it has never been applied to a sufficiently large sample of patients with UTUC. However, in everyday clinical practice and in the planning and design of randomized controlled trials, knowledge of distribution and potential age- and sex-specific differences in metastatic UTUC sites is important. We addressed this point and tested for distribution and variability in the distribution of metastases according to age and sex in a contemporary cohort of patients with metastatic UTUC. Specifically, we hypothesized that the distribution of metastases varies according to sex, and further postulated that age affects distribution patterns differently in men and women.

R version 3.4.3 (R Foundation for Statistical Computing) was used for all statistical analyses. All tests were 2-sided with the significance level set at P<.05.

Location of Metastases According to Sex

Figure 1 depicts rates of site-specific metastases according to sex. Lung metastases were most common in both sexes (28.2% vs 26.4%). In men, the second most common metastatic site was bone (22.3% of men vs 18.0% of women [fourth most common site]) versus the liver in women (24.4% of women vs 20.5% of men [fourth most common site]). Lymph node metastasis ranked third in both sexes (21.9% in men vs 22.5% in women). Combined retroperitoneal and peritoneal metastases (15.7% in men vs 16.5% in women) versus adrenal metastases (6.6% vs 5.6%, respectively) ranked fifth and sixth, respectively. Finally, brain metastases were rare and were identified in 4.2% of men and 2.4% of women (eighth in men and tenth in women). None of these sex-related differences achieved statistical significance.

Location of Metastases According to Age and Sex

Effects of Sex and Age on Specific Solitary Metastatic Sites

Age According to Different Metastatic Sites and Sex

Figure 2 presents the relationship between age at diagnosis according to different metastatic sites and sex. Patients with brain metastases were substantially younger (median age, 62 years in women and 67 years men), whereas those with metastases at all other sites presented with a median age of ≥70 years. The median age of female patients with abdominal metastases (74.5 years) was significantly higher than that of female patients with brain metastases (62 years; P=.04). All other comparisons did not yield significant differences in age according to sex and metastatic site.

First, our study provides the first large-scale tabulation of metastases according to their location in UTUC. Specifically, abdominal and thoracic imaging is invariably recommended and performed in individuals considered at risk for metastatic UTUC.8 This approach is consistent with the distribution of all metastatic sites except for bone metastases. Notably, bone metastases ranked second in men and fourth in women. Consequently, standard imaging should include bone, which may not be imaged routinely in all of its extent with abdominal CT imaging. In light of our findings, routine bone surveys may be considered in all patients. Alternatively, bone scans may be used. However, predominance of lytic lesions may limit their usefulness because not all lytic lesions are reliably identified in bone scans.9,10 This observation is not reflected in the most contemporary imaging guidelines for UTUC. Currently, the NCCN Clinical Practice Guidelines in Oncology (NCCN Guidelines) for Bladder Cancer11 recommend bone imaging in patients with UTUC in the presence of bone symptoms or in patients with laboratory indicators of bone metastases. Moreover, the NCCN recommendation regarding bone imaging was based on a lower level of evidence (category 2A) with uniform consensus among the NCCN Bladder Cancer Panel that the intervention is appropriate.11 Conversely, the European Association of Urology guidelines8 do not mention bone imaging at all but rely on CT scan as the preferred diagnostic technique for lung and abdominal staging of metastases.

Second, we identified a low rate of brain metastases in both sexes (4.2% of men vs 2.4% of women), suggesting that routine brain imaging may not be required, unless it is based on an elevated level of clinical suspicion. This approach is consistent with contemporary guidelines.8,11

Third, in sex-stratified analyses, we identified differences in rates of bone metastases, which were 22.3% in men versus 18.0% in women. Conversely, the opposite difference in rates was recorded for liver metastases (24.4% of women vs 20.5% of men). Moreover, ovarian metastases may exist in women (2.2%). No additional clinically meaningful differences in sex distribution were identified. Notably, none of the sex-related differences achieved statistical significance.

Fourth, in age- and sex-stratified analyses of exclusive metastatic site distribution, we identified only one clinically meaningful and statistically significant observation in 4 sets of analyses that focused on lung, bone, liver, and brain. Specifically, the rate of exclusive liver metastases increased with increasing age in female patients. This observation may be of assistance to clinicians who suspect liver metastases. Our findings indicate that the index of suspicion doubles with increasing age (from 21% to 41%; P=.04). The presence of this trend is helpful; however, it is not sufficiently specific to rule in or out liver metastases.

Notably, our study represents the first population-based effort aimed at tabulating and describing the metastatic sites of UTUC according to age and sex. Only 2 other studies addressed the same topic, and they were based on 52 and 337 patients, respectively.2,3 Like our study, the studies by Shinagare et al2 and Dong et al3 found the lung to be the most prevalent site of metastasis, whereas the liver was more common than bone in the analyses by Shinagare et al, and Dong et al found the same rates for bone and liver metastases. Like our study, their studies exclusively focused on patients with metastatic disease and did not provide a denominator, nor could they quantify the rates of de novo metastatic UTUC. Therefore, incidence data regarding de novo metastatic UTUC are still needed. Unfortunately, the current database could not provide such data. Only one older population-based study (1973–2005) addressed incidence rates of UTUC, reporting that 8% of patients with UTUC presented with a distant metastatic stage,16 but the study was without closer stratification regarding sites of metastases.

Considering all of the findings together, the present study provides the first contemporary description of detailed distribution of UTUC metastases according to age and sex. Our findings indicate that routine bone surveys should be universally performed in patients with UTUC because bone metastases represent the second and fourth commonest sites in men and women, respectively. Conversely, brain imaging may continue to be performed in select patients based on clinical suspicion for brain metastases. In addition, we identified sex-specific differences in bone and liver metastases and a sex- and age-specific increase in solitary liver metastases in women. However, the magnitude of these sex- and age-related differences was too small for application in everyday clinical practice. Nonetheless, these differences may be of importance in the planning and design of clinical trials.

Despite its novelty, our study is not devoid of limitations. First, the NIS database includes only hospitalized patients, and therefore, patients who never required hospitalization have been omitted from our analyses. Second, the NIS is an observational, retrospective database relying on ICD-9 codes to assess secondary diagnostic codes, which may be subject to potential coding biases. Moreover, the NIS database does not provide laboratory results or other comorbidity information. Specifically, histologic subgroups, such as urothelial versus variant histology, could not be assessed because of design limitations of the database. Nonetheless, the NIS estimates are considered to be precise and accurate.6 Finally, our analyses focused exclusively on a cohort with metastases and thus cannot provide incidence rates of metastatic sites in the overall UTUC population.

Lung, bone, and liver metastases are the most common metastatic sites in both sexes. However, the distribution of metastases varies according to sex and age. These observations apply to everyday clinical practice and may be used, for example, to advocate for universal bone imaging in patients with UTUC. Moreover, our findings may also be used in design considerations of randomized trials.

Rates of conditional brain metastases according to absence or presence of abdominal and thoracic metastases. 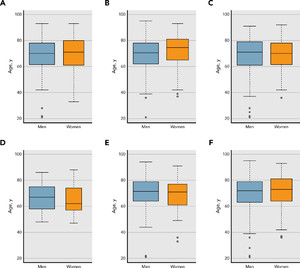 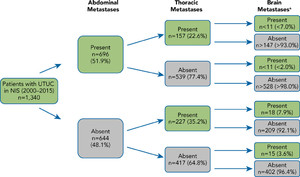