Patients with cancer who have a mental disorder at cancer diagnosis or who develop new mental disorders later in the oncologic course represent a particularly vulnerable subgroup at risk for worse cancer outcomes.1–3 A comorbid mental disorder is a known risk factor for inferior oncologic outcomes.4 Thus, efforts to integrate symptom management, palliative care, and psycho-oncologic care have been introduced into consensus guidelines.5,6 Similarly, the American College of Surgeons Commission on Cancer standards require accredited cancer centers to provide psychosocial distress screening to identify patients at high risk for a mental disorder and to monitor the referral for psychosocial care.7 These efforts are more often aimed at patients earlier in their cancer diagnosis and treatment. However, it has been shown that there is a sharp increase in mental disorder diagnoses not only leading up to a cancer diagnosis but also in the following months and years of the oncologic course.8 For patients with a gastrointestinal cancer, population-based estimates and longitudinal studies of mental disorders remain lacking.9

In addition, despite the fact that most patients with cancer are aged ≥65 years, there remains a need for behavioral and psychological studies in this population.10 Unfortunately, elderly patients have many mental disorder risk factors, including having less-aggressive oncologic management, baseline cognitive deficits, poor functional status, and a greater number of medical comorbidities.10 Thus, we set out to perform a longitudinal study of mental disorders among elderly patients with gastrointestinal cancers.

The cohort included patients aged ≥65 years with Medicare Parts A and B enrollment without HMO coverage starting 12 months before cancer diagnosis to ensure completeness of claims data. Only patients with complete staging information were included. Censoring occurred at the end of December 2014 or when Medicare coverage was lost.

Statistical significance was set at 0.05, and all tests were 2-tailed. Data analysis and statistical testing was performed using R version 3.5 (R Foundation for Statistical Computing).

Early mental disorders were more likely in patients who were older (24% of those aged ≥85 years), female (26%), White (22%), unmarried, and from a lower income area, and those with dual Medicaid insurance (29%), more comorbidities (Charlson comorbidity index score ≥1), and regional disease (22%), and were less likely in those with distant disease at diagnosis (19%).

Characteristics Associated With Development of a Subsequent Mental Disordera

Patient Characteristics According to Receipt of Psychiatric/Psychological Treatmenta

We performed secondary analyses limited to patients who had routine interaction with the healthcare system, defined as receiving the influenza vaccination (supplemental eAppendix 3). Cancer subsite and demographic findings were consistent with the primary analysis. The incidence of developing a subsequent mental disorder at 5 years was 11% to 23% depending on cancer subsite. Another secondary analysis was performed classifying an early mental disorder as a condition identified in any billing claim 12 months before the date of cancer diagnosis (supplemental eAppendix 4). We found that fewer patients met criteria for an early mental disorder diagnosis (11%), whereas the 5-year incidence of a subsequent mental disorder was higher (21%–30% depending on cancer subsite).

Lastly, we performed additional analyses of mental disorder subcategories (supplemental eAppendix 5). The most common early and subsequent diagnoses were depressive disorders, followed by anxiety, psychotic, and bipolar disorders. Having any subsequent mental disorder was also more likely for those with a different, earlier mental disorder. The pattern of clinical and demographic associations in the primary analysis were generally consistent across this secondary analysis (supplemental eAppendix 5).

We conducted a population-based study to determine the burden of mental disorders among elderly patients with gastrointestinal cancers in the United States. Depending on the cancer subsite, 19% to 26% of patients had a diagnosed early mental disorder, and an additional 10% to 19% of patients developed a subsequent mental disorder. These diagnoses were more likely among patients with more advanced disease, but rates were substantial among all subgroups.

Our estimates for the rates of early and subsequent mental disorders are similar to prior liturature.8,18–22 However, one limitation of registry studies is the reliance on accurate diagnostic coding by health practitioners, which can result in an underrepresentation of the true prevalence of comorbidities because there is no guarantee that patients interact with the healthcare system and receive accurate diagnostic codes.23,24 We used strategies to address this known issue, including defining an early mental disorder as one diagnosed 12 months before or up to 6 months after the cancer diagnosis to account for patients who have more limited interactions with the healthcare system.8 Second, we performed an analysis limited to patients receiving routine influenza vaccinations. Because influenza vaccination is recommended universally for adults, all patients should be interacting with the healthcare system on at least an annual basis, and hence this surrogate has been used previously.16,17 Third, we investigated the number of patients receiving care from a mental health professional, which more accurately identifies patients with more severe psychiatric burden.25

The explanation for the high rates of early mental disorders among patients with gastrointestinal cancer in the current study is likely multifactorial. Several studies have shown that rates of mental disorders begin to increase before the cancer diagnosis, with the thought that the initial symptoms and diagnostic workup induce a stress response that can trigger a mood disorder.8,26–28 For other patients with a longstanding mental disorder, there has been great heterogeneity among studies to determine whether there is an increased risk for cancer or if other modifying factors and behaviors are responsible.29 Patients with mental disorders are more likely to have certain cancer risk factors, such as metabolic syndrome, a smoking history, and worse healthcare access.30–33 Detangling the causality in the precancer diagnosis period remains challenging.

Another finding was that lower income, as measured by dual Medicaid insurance and living in a lower income area, was a risk factor for having a mental disorder. Potential explanations include that lower socioeconomic position is associated with access to fewer healthcare resources and with unhealthy behaviors, such as smoking and obesity, which are associated with developing a mental disorder.29–33,47

Our study found that women were at higher risk for having a mental disorder, which is consistent with prior reports.48 One thought is that rather than having biologic or hormonal underpinnings, the explanation has more to do with social disadvantages, such as intimate-partner violence putting women at risk for mental disorders, women being more likely to have mental disorders at a young age, women having a different set of cultural norms with associated role limitations and economic discrimination, and women being more likely to report psychological symptoms and receive a mental disorder diagnosis from a practitioner.49

In addition, our study found that White and non-Hispanic patients were more likely to have an early or subsequent mental disorder, which is a well-recognized finding.50,51 However, we caution against overinterpretation of these results, because disparities may exist despite our findings. For example, one well-known exception is that Black Americans tend to have higher rates of schizophrenia.52 In addition, despite lower rates overall, it is thought that non-White Americans have higher psychological symptom burden, have less access to mental care, and are less likely to receive a mental disorder diagnosis because of practitioner bias and discrimination.53

Our study found that patients aged >75 years were less likely to have an early mental disorder, but more likely to go on to develop a subsequent mental disorder. In general, most literature supports the finding that older age is protective against having a mental disorder, although debate exists.54 Older patients tend to have more comorbidities and are less likely to receive aggressive cancer treatment.10 However, whether our finding that older age was associated with a subsequent mental disorder among patients with gastrointestinal cancer is related to the interplay between cancer prognosis, treatment, and age needs to be further explored.

Interestingly, the analysis of patients receiving management from a mental healthcare professional showed a somewhat different pattern of demographic risk factors. This finding may have been partly because patients with more severe mental disorders received professional psychiatric/psychological care, given that we found it to be associated with many demographic characteristics that were also associated with having an early or subsequent mental disorder (single marital status, dual Medicaid insurance, more medical comorbidities). However, there are many confounders; for example, the association with living in an affluent area or being older and receiving professional mental healthcare may be a marker for access. Thus, the findings are likely multifactorial and need to be better elucidated in future studies.

Limitations of this study include that it uses administrative billing claims to define the endpoint of mental disorder. Medicare claims were created and used for physician and institutional payment rather than research purposes. Ideally, diagnoses would be in accordance with the Diagnostic and Statistical Manual of Mental Disorders (Fifth Edition; DSM-5).55 However, diagnostic codes in billing claims rely on practitioner familiarity with the diagnosis of these disorders. As we have shown in our study, most patients with cancer who have a mental disorder are not receiving care from a mental health professional, and therefore the mental disorder diagnosis often falls to a general practitioner or oncologist who is likely less familiar with the specific DSM-5 criteria for a diagnosis of depressive, anxiety, psychotic, or bipolar disorder. As discussed previously, reliance on diagnostic and procedure codes can result in an underrepresentation of mental disorders. Despite our use of contemporary methods for analyzing healthcare claims, there will continue to be discrepancies with determining the number of mental disorders.56

Furthermore, there is some amount of uncertainty regarding the timing of mental disorder development and cancer diagnosis. For some patients, the cancer, its psychological burden, and resultant treatment toxicities may contribute to a new mental disorder, whereas for other patients there is an association between longstanding mental disorder and having risk factors for the development and asymptomatic progression of cancer. In the current study we used a generous window to define an early mental disorder (12 months before and up to 6 months after cancer diagnosis), although conclusions were similar when a shorter window was used (12 months before or up to the date of cancer diagnosis). In addition, we were not able to control for cancer treatments, laboratory or imaging tests, clinical performance status, or behavioral practices such as smoking or substance use, which can result in residual confounding.

Similar to other retrospective studies, there can be selection bias, and prospective cohort studies would be needed to confirm the results of this study. Excluded patients were more likely to be unmarried and have dual Medicaid insurance, and hence may be more likely to have mental disorders. In addition, the patients in our cohort were from an elderly Medicare population, which may not accurately represent younger patients or those with different or inadequate insurance. Similarly, racial minorities were underrepresented, a common issue among similar studies that makes generalization to those populations challenging.9

Cohort selection from the SEER-Medicare database. 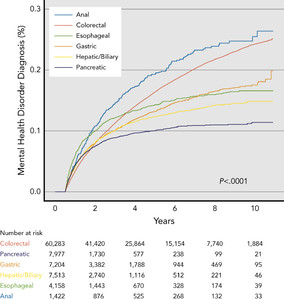