Cost-Effectiveness of Durvalumab After Chemoradiotherapy in Unresectable Stage III NSCLC: A US Healthcare Perspective

Background: Durvalumab was approved by the FDA in February 2018 for patients with unresectable stage III NSCLC that has not progressed after platinum-based concurrent chemoradiotherapy (cCRT), and this regimen is the current standard of care. The objective of this study was to examine the cost-effectiveness of durvalumab following cCRT versus cCRT alone in patients with locally advanced, unresectable stage III NSCLC. Methods: A 3-state semi-Markov model was used. Modeling was performed in a US healthcare setting from Medicare and commercial payer perspectives over a 30-year time horizon. Clinical efficacy (progression-free and post progression survival) and utility inputs were based on PACIFIC study data (ClinicalTrials.gov identifier: NCT02125461; data cutoff March 22, 2018). Overall survival extrapolation was validated using overall survival data from a later data cutoff (January 31, 2019). The main outcome was the incremental cost-effectiveness ratio (ICER) of durvalumab following cCRT versus cCRT alone, calculated as the difference in total costs between treatment strategies per quality-adjusted life-year (QALY) gained. Results: In the base-case analysis, durvalumab following cCRT was cost-effective versus cCRT alone from Medicare and commercial insurance perspectives, with ICERs of $55,285 and $61,111, respectively, per QALY gained. Durvalumab was thus considered cost-effective at the $100,000 willingness-to-pay (WTP) threshold. Sensitivity analyses revealed the model was particularly affected by variables associated with subsequent treatment, although no tested variable increased the ICER above the WTP threshold. Scenario analyses showed the model was most sensitive to assumptions regarding time horizon, treatment effect duration, choice of fitted progression-free survival curve, subsequent immunotherapy treatment duration, and use of a partitioned survival model structure. Conclusions: In a US healthcare setting, durvalumab was cost-effective compared with cCRT alone, further supporting the adoption of durvalumab following cCRT as the new standard of care in patients with unresectable stage III NSCLC. 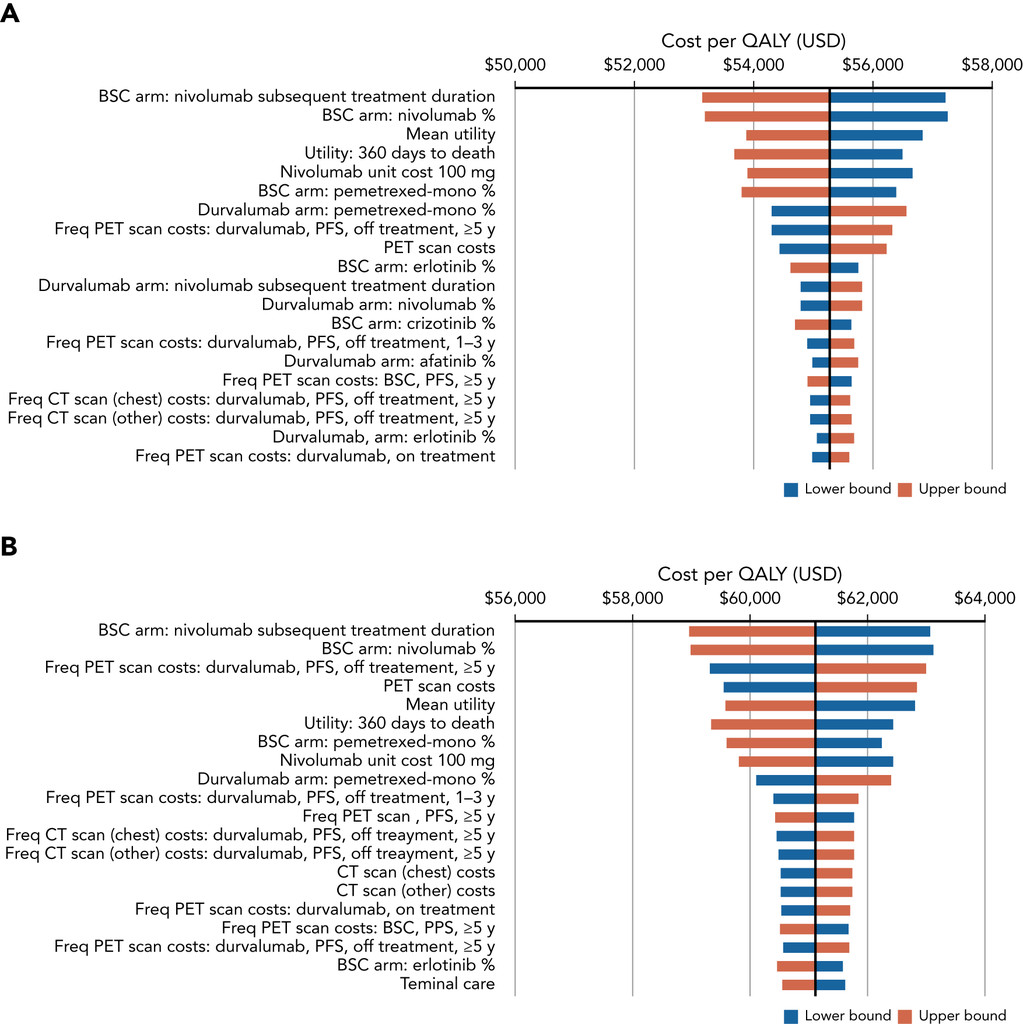 One-way sensitivity analysis examining the impact of individual model parameters on the ICER of durvalumab following cCRT versus cCRT alone, from (A) Medicare and (B) commercial insurance perspectives. Note: nivolumab use as subsequent treatment was based on post progression therapy from the PACIFIC trial.12

Cost-effectiveness acceptability curves for the durvalumab following cCRT and cCRT-alone arms generated from the probabilistic sensitivity analysis (1,000 iterations) from (A) Medicare and (B) commercial insurance perspectives. 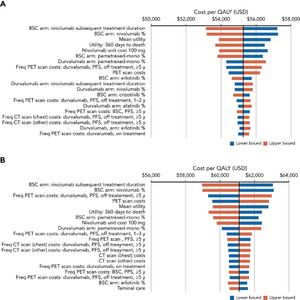