Background: Philanthropic donations are important funding sources in academic oncology but may be vulnerable to implicit or explicit biases toward women. However, the influence of gender on donations has not been assessed quantitatively. Methods: We queried a large academic cancer center’s development database for donations over 10 years to the sundry funds of medical and radiation oncologists. Types of donations and total amounts for medical oncologists and radiation oncologists hired prior to April 1, 2018 (allowing ≥2 years on faculty prior to query), were obtained. We also obtained publicly available data on physician/academic rank, gender, specialty, disease site, and Hirsch-index (h-index), a metric of productivity. Results: We identified 127 physicians: 64% men and 36% women. Median h-index was higher for men (31; range, 1–100) than women (17; range, 3–77; P=.003). Men were also more likely to have spent more time at the institution (median, 15 years; range, 2–43 years) than women (median, 12.5 years; range, 3–22 years; P=.025). Those receiving donations were significantly more likely to be men (70% vs 30%; P=.034). Men received significantly higher median amounts ($259,474; range, $0–$29,507,784) versus women ($37,485; range, $0–$7,483,726; P=.019). On multivariable analysis, only h-index and senior academic rank were associated with donation receipt, and only h-index with donation amount. Conclusions: We found significant gender disparities in receipt of philanthropic donations on unadjusted analyses. However, on multivariable analyses, only productivity and rank were significantly associated with donations, suggesting gender disparities in productivity and promotions may contribute to these differences.

Philanthropic fundraising, in contrast to traditional private and public grant-based funding mechanisms, is less reliant on rigorous evaluation of scientific merit for determination of awards, and more reliant on interpersonal relationships and provider proactiveness in broaching opportunities. As such, philanthropy may be particularly vulnerable to implicit and explicit biases toward women. Among other factors, men may be more likely to be perceived as leaders, whereas women may face societal stereotypes about “pushiness” and caregiving.10

In a recent survey of oncologists, 71% reported having been exposed to fundraising or development staff. However, of the respondents, men were significantly more likely to feel comfortable talking to patients about PDs. At the same time, women were significantly more likely to believe that there would be negative consequences if they refused to participate in philanthropy.11

Although women report less comfort with soliciting PDs, to our knowledge, there have been no studies examining the influence of gender on receipt of PDs in academic oncology, and no prior evaluation of associations among donations, productivity, and physician/academic rank. To better understand these relationships, we analyzed development records at a large academic cancer center, identifying factors associated with PD receipt and PD amount.

We queried the internal institutional development office database at Massachusetts General Hospital Cancer Center for total amounts of philanthropic funds from the past 10 years as evaluated by PDs present in an individual medical or radiation oncologist principal investigator’s sundry fund. Sundry funds can be used to support any research-related activity and could potentially be transferred from one individual to another. Types of donations, including individual, corporate/foundation, estate/trust, and miscellaneous, as well as total amounts in sundry funds for medical oncologists and radiation oncologists hired prior to April 1, 2018 (allowing ≥2 years on faculty prior to query) were obtained. A few corporate donations were private grant funds requiring applications. 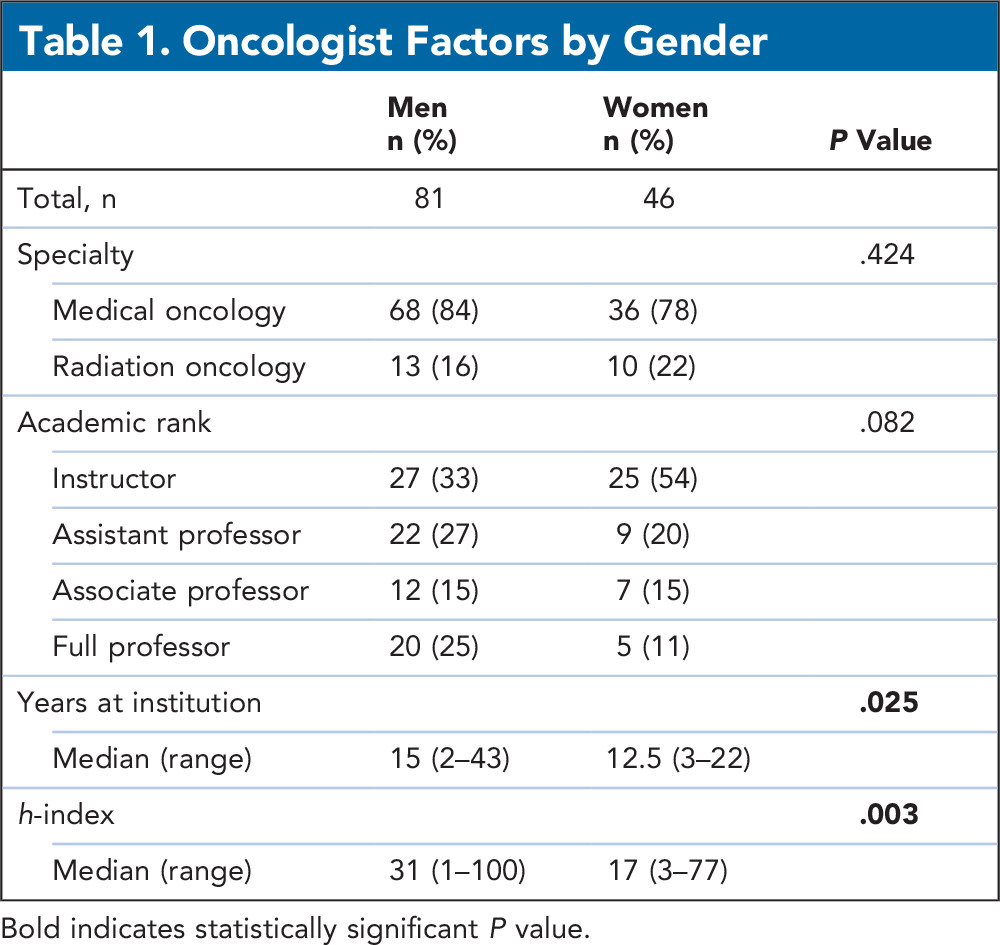 Oncologist Factors by Receipt of PDs 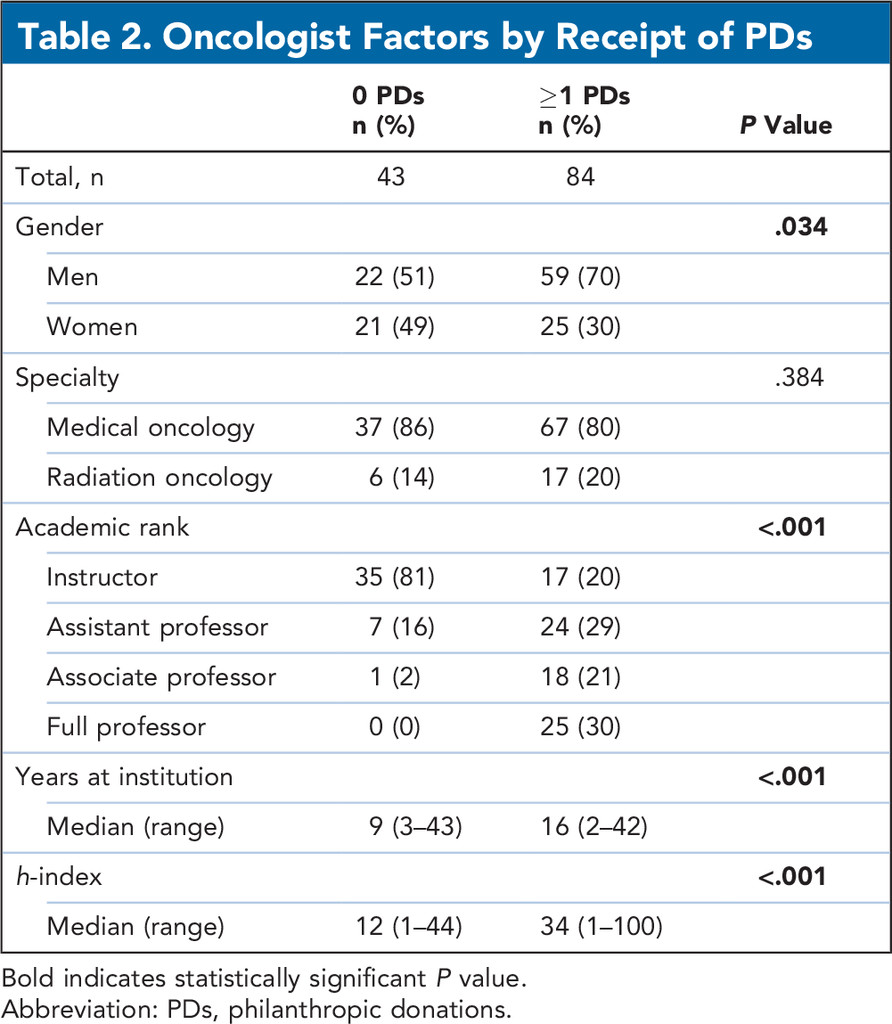 We additionally analyzed the subset of medical oncologists. Among the 104 medical oncologists, there were no significant differences in PD receipt by gender: 71% of men and 53% of women received PDs (P=.07). However, men had significantly higher median fundraising than women ($259,474.30 [range, $0–$29,507,784] vs $30,020 [range, $0–$7,483,726]; P=.049). On multivariable analysis, h-index and senior academic rank were significantly associated with PD receipt (Table 4), whereas only h-index was significantly associated with total donation amount (Table 4).

In this study, we found gender differences in likelihood of receiving PDs of every kind, including from individuals, corporations/foundations, and estates/trusts. Men were more likely to receive donations and raise more total funds. However, on multivariable analyses, senior academic rank and h-index were the only significant predictors of donation receipt and h-index was the only significant predictor of donation amount, suggesting that previously documented disparities in promotions and productivity could be a driver of the observed differences in PDs.5,8

In this study, men had nearly double the median h-index of women medical and radiation oncologists. This finding is in line with several other studies by researchers of various specialties that demonstrate gender differences in h-index.8,16–21 These disparities are likely multifactorial, with cited reasons including lack of mentorship and sponsorship, gender discrimination in the workplace, pregnancy and childrearing burdens, and more allocation of time to teaching and clinical work.22,23 At the same time, women face disparities in administrative, grant, and research support that are crucial for publication productivity, which may in turn affect chances of PD receipt.6,7,24 The h-index also does not reflect place on the authorship list, and “courtesy” authorship offers may be more likely to be extended to men. This metric does not capture self-citation, which men have been shown to practice more frequently.19 Articles by women may, for example, be less likely to be cited than those by men for reasons that are unrelated to publication importance. Interestingly, some work does suggest that gender differences in h-index may be most prominent at junior levels but disappear when analyzing physicians of more senior academic rank.8,18,20 This effect could possibly be related to delay in careers during childbearing and rearing of young children, or selection bias due to attrition of women from academia.

Our results are limited because it is a small study, representative of a single institution, and there are likely other unaccounted covariables. Gender could also be associated with differences in patient volume, clinical patterns, and referrals, potentially providing men with more opportunities for contact with wealthier patients and solicitation of PDs. Additionally, although most gender-related disparities research discusses gender in binary terms, it exists on a spectrum, which our data do not reflect. In addition, use of the h-index to measure productivity has flaws and may not fully capture research productivity. The h-index also does not capture the clinical productivity of a physician, which might assist in relationship-building for philanthropic fundraising, and does not capture physician value.

Despite these limitations, our work is the first to quantitatively assess the relationship between productivity, gender, and PDs. Further research and focused interventions are needed to ensure that female physicians are equitable recipients of PDs, and to better understand relationships with gender-related disparities in academic productivity, promotions, and compensation.

In this study of philanthropic fundraising among medical and radiation oncologists at a large academic cancer center, we found significant gender disparities in likelihood of receiving PDs and total fundraising amount on unadjusted analyses. However, on multivariable analyses, h-index and academic rank were significantly associated with PDs, suggesting that gender disparities in promotions and productivity may contribute to these differences.

Median total amounts and numbers, by donation type, of philanthropic donations to male and female oncologists (A, B) for all physicians (n=127) and (C, D) in the subset of physicians with ≥1 donation (n=84). 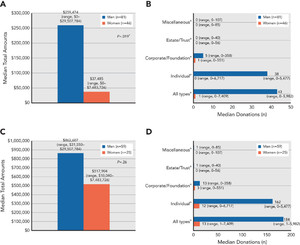