Background: In the CASPIAN trial, durvalumab + chemotherapy demonstrated significant improvements in overall survival compared with chemotherapy alone in patients with extensive-stage small cell lung cancer (SCLC). We aimed to assess the cost-effectiveness of durvalumab in patients with extensive-stage SCLC from the US healthcare system perspective. Patients and Methods: A comprehensive Markov model was adapted to evaluate cost and effectiveness of durvalumab combination versus platinum/etoposide alone in the first-line therapy of extensive-stage SCLC based on data from the CASPIAN study. The main endpoints included total costs, life years (LYs), quality-adjusted life-years (QALYs), and incremental cost-e-ectiveness ratios (ICERs). Model robustness was assessed with sensitivity analysis, and additional subgroup analyses were also performed. Results: Durvalumab + chemotherapy therapy resulted in an additional 0.27 LYs and 0.20 QALYs, resulting in an ICER of $464,711.90 per QALY versus the chemotherapy treatment. The cost of durvalumab has the greatest inﬂuence on this model. Subgroup analyses showed that the ICER remained higher than $150,000/QALY (the willingness-to-pay threshold in the United States) across all patient subgroups. Conclusions: Durvalumab in combination with platinum/etoposide is not a cost-effective option in the first-line treatment of patients with extensive-stage SCLC.

Lung cancer remains the leading cause of cancer incidence and mortality, with 2.1 million new lung cancer cases and 1.8 million deaths in the United States.1,2 Approximately two-thirds of patients with small cell lung cancer (SCLC) have extensive-stage disease at diagnosis, with a 5-year survival rate of <7%.3,4 Etoposide with either cisplatin or carboplatin (platinum/etoposide) was the standard first-line therapy for extensive-stage SCLC for 3 decades.5,6 Most patients experience relapse within 6 months of completing initial treatment, despite high rates of response to chemotherapy.7,8

A comprehensive Markov model with 3 mutually exclusive health states—progression-free survival (PFS), progressive disease (PD), and death—was adapted to evaluate the costs and effectiveness of treatment of extensive-stage SCLC with durvalumab + chemotherapy and chemotherapy alone. All patients were assumed to be treated with durvalumab + chemotherapy or chemotherapy alone in the PFS state until disease progression. When the disease progressed or unacceptable adverse reactions occurred, patients in both groups could receive subsequent comprehensive treatment until death (supplemental eFigure 1, available with this article at JNCCN.org).

We assigned the model cycle as 6 weeks, to fit with the various dosage frequencies of interventions. The time horizon was lifetime. An annual 3% discount rate was adopted both on costs and outcomes.14 The primary outcome measures of the models included the total costs, life-years (LYs), quality-adjusted life-years (QALYs), and incremental cost-effectiveness ratios (ICERs). Based primarily on results of the CASPIAN trial, the model structure and data were also supplemented by data retrieved from publicly available databases and published literature. The model was constructed via TreeAge Pro 2020 (TreeAge Software, Inc.).

The transition probabilities for both groups were derived from the PFS and OS curves in the CASPIAN trial. We used GetData Graph Digitizer 2.26 to collect data points from the curves for the 2 groups based on the method described by Rini et al,15 and these data points were then fit into the parametric survival model. The Weibull distribution provided the most appropriate fit to pseudo-individual patient data among the exponential, log-logistic, log-normal, and Gompertz distributions, according to the Akaike information criterion and the Bayesian information criterion, combined with visual inspection.16 A detailed description of the survival model selection is shown in supplemental eTable 1 and eFigure 2. Detailed parameters of the survival model are shown in Table 1. 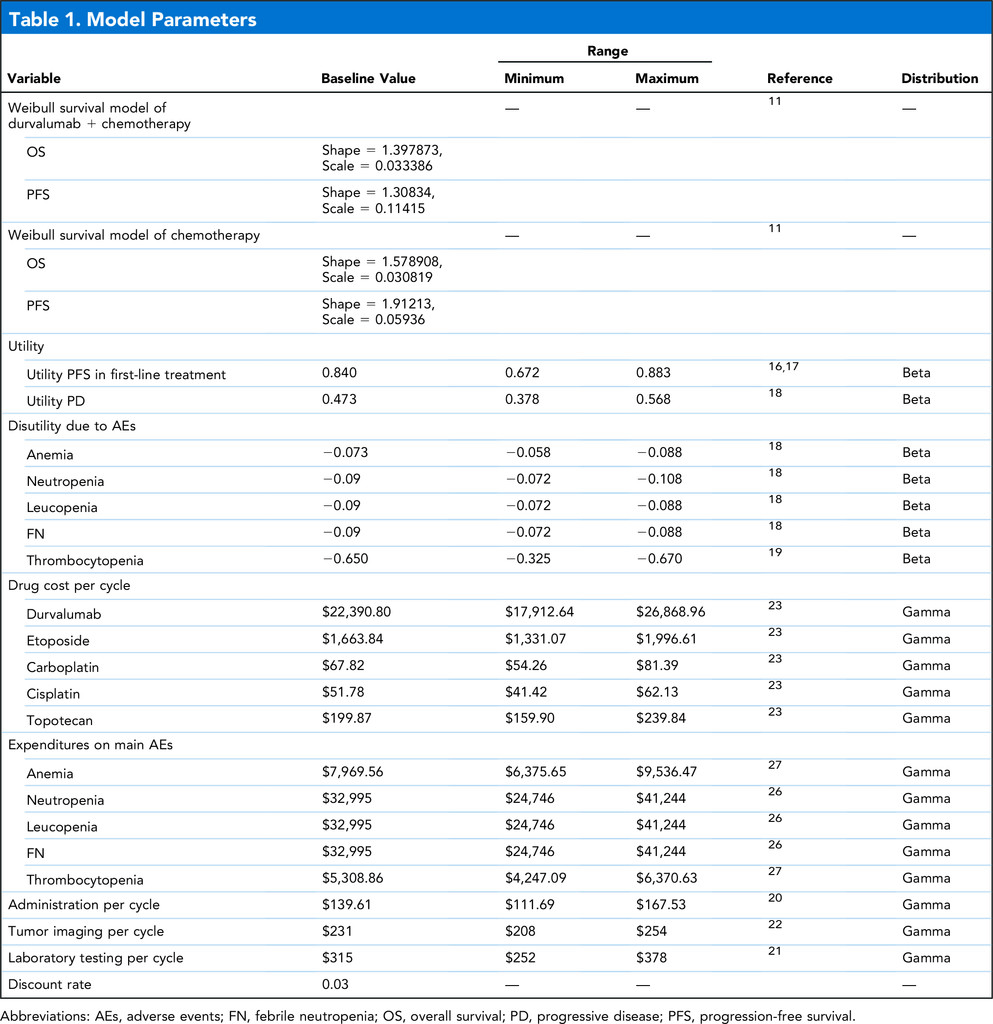 We used utility to measure patients’ health-related quality of life at a particular health state. The mean health utility values for the PFS and PD states, 0.84017,18 and 0.473,19 respectively, were derived from the previously published literature. The disutility values due to grade 3/4 adverse effects (AEs) were factored during the analysis.19,20

This analysis adopted the third-party payer in the United States, which only considered direct medical care costs, including costs of drugs, administration,21 AEs (assuming that AEs appeared only once in the PFS and PD states), and laboratory22 and radiographic tests.23 According to the CASPIAN trial, the durvalumab + chemotherapy group received up to 4 cycles of durvalumab at 1,500 mg and chemotherapy (etoposide at 80–100 mg/m2 [administered on days 1–3 of each 21-day cycle] and either carboplatin at an area under the curve [AUC] of 5–6 mg/mL or cisplatin at 75–80 mg/m2 [administered on day 1 of each cycle]). After 4 cycles, patients received maintenance treatment with 1,500 mg of durvalumab administered intravenously every 4 weeks. Patients in the platinum/etoposide group could receive an additional 2 cycles of platinum/etoposide (up to 6 cycles total). For chemotherapy dosing, we used a standard AUC of 6 mg/mL/min and assumed male sex, 65 years of age, weight of 70 kg, height of 70 cm, body surface area of 1.84 m2, and serum creatinine level of 1 mg/dL.20 Drug prices were based on the Centers for Medicare & Medicaid Services Average Sales Price24 (Table 1). The subsequent therapy received in 2 groups were not well described in the CASPIAN trial. Therefore, we assumed patients received the standard second-line chemotherapy: topotecan alone (1.5 mg/m2/d administered intravenously on days 1–5 every 21 days). Its dose was based on clinical trial data.25,26

Grade 3/4 severe AEs were included in the model, which had notably different probabilities between the arms of the CASPIAN trial. The incidence rates of AEs in the model came from the CASPIAN trial data. The costs of managing AEs per event in the United States were extracted from the published literature.27,28 All costs were adjusted to present 2020 US dollars and the US consumer price index was adopted as reference for inflation. Information on these costs is provided in Table 1.

In addition, subgroup analyses were completed in patients in the forest plot of the CASPIAN trial based on the subgroup-specific HRs according to the approach taken by Hoyle et al.29 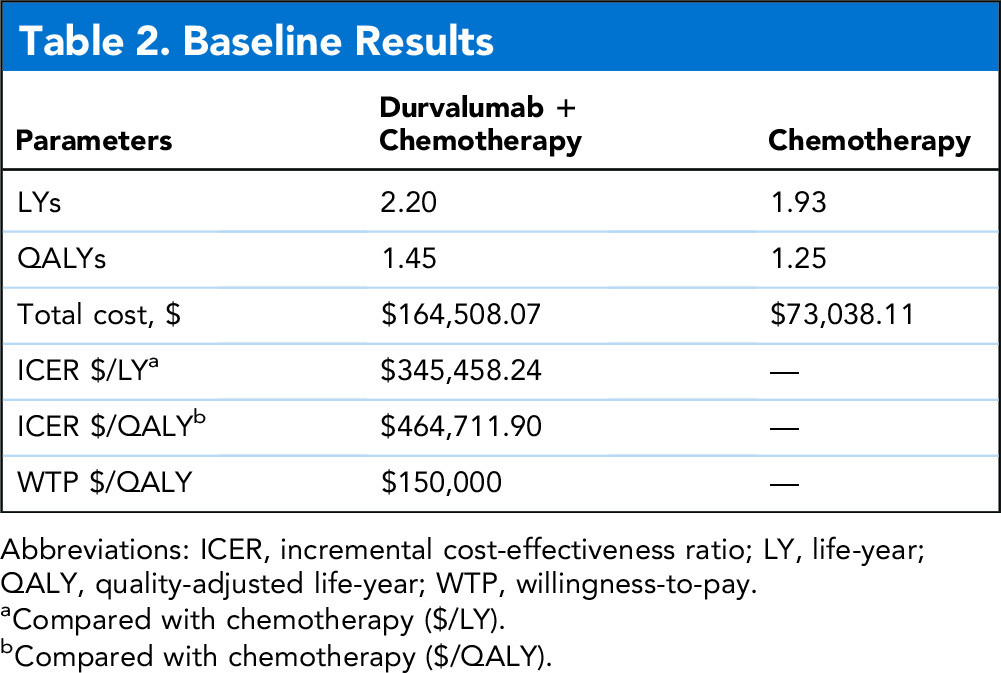 Results of ICER scatterplot (supplemental eFigure 3) and acceptability curves (Figure 2) demonstrated that the probability of durvalumab + chemotherapy being cost-effective, compared with that of chemotherapy alone was 0% at a WTP threshold of $150,000. The ICER remained greater than the WTP threshold across all patient subgroups in the subgroup analyses (supplemental eTable 2)

In recent years, immune checkpoint inhibitors (ICIs) have shown significant clinical benefits in patients with non–small cell lung cancer (NSCLC) at different stages, and there are also many studies on immunotherapy for refractory or metastatic SCLC.9,11,30–34 Although the results of a study showed that first-line immunotherapy (ipilimumab) + chemotherapy did not significantly improve the OS of patients with extensive-stage SCLC compared with chemotherapy alone,34,35 some inspiring results of 2 phase III studies indicated that the addition of atezolizumab or durvalumab to chemotherapy showed promising clinical activity.9,11 Considering the expensive cost of ICIs, we conducted the first study to estimate the cost-effectiveness of durvalumab + chemotherapy versus chemotherapy alone as first-line therapy for patients with extensive-stage SCLC.

The IMpower133 trial is another study that demonstrated that first-line treatment with immunotherapy (atezolizumab) + chemotherapy resulted in significantly longer OS and PFS compared with chemotherapy alone for patients with extensive-stage SCLC. Subsequently, the combination of atezolizumab and carboplatin/etoposide was approved by the FDA in this indication and was recommended in NCCN Guidelines for SCLC, Version 1.2019.36 A cost-effectiveness analysis reported by Zhou et al37 suggested that the addition of atezolizumab to carboplatin/etoposide is not a cost-effective choice in the first-line treatment of extensive-stage SCLC from an American perspective, with a gain of 0.10 QALYs and an ICER of $528,810 per QALY. Our results were in agreement with this finding, and the increased QALYs of durvalumab + chemotherapy (0.20 QALYs) in our study were more significant than those of atezolizumab + chemotherapy. Similarly, immunotherapy combined with chemotherapy was not a cost-effective choice in the cost-effectiveness analysis for NSCLC.38,39 The price of ICIs was always the greatest factor affecting the outcomes. A reduction in price of ICIs through trade-off negotiations regarding drug price and coverage may be an appropriate and effective method to improve the cost-effectiveness.

It is a challenge to approve new drugs by solely relying on survival benefits. That is why different economic elements in different regions should be taken into account during drug approval. Meanwhile, physicians and administrators should be aware of the significance of utilizing predictive markers in appropriate patient selection to map out cost-effective strategies aiming to sustain our healthcare systems.

PD-L1 expression has been regarded as a predictive biomarker of response to ICIs. In many pharmacoeconomic studies of NSCLC, it has been found that high PD-L1 expression incrementally improves QALYs, resulting in a decrease in ICER.28,40–42 Our previous analysis results attested that first-line treatment with pembrolizumab is a cost-effective strategy compared with platinum-based chemotherapy in patients with locally advanced or metastatic NSCLC and PD-L1 tumor proportion score (TPS) ≥50%, but not in those with TPS ≥20% and ≥1%.41 Another predictive biomarker of immunotherapy for lung cancer is high tumor mutational burden (TMB) which had no significant correlation with tumor PD-L1 expression.43–45 Similarly, it was found that there was an association between immunotherapy response and PD-L1 expression or TMB in SCLC.30,43,46 Unfortunately, the CASPIAN trial did not report the expression of PD-L1 or TMB. The ICER of durvalumab + chemotherapy may be improved by selecting patients according to the expression level of biomarkers. Further study is needed to explore biomarkers such as PD-L1 expression and TMB in order to identify which patients with this heterogeneous disease are likely to experience greater treatment benefits, so that therapy may be tailored to the individual.

This study has several limitations. First, extrapolations of the survival data were based on the short-term survival data from CASPIAN, and the data would change along with long-term follow-up. As more mature data become available, the model will be more stable. For now, it is an inevitable limitation in our model. Second, immunotherapy-related AEs are rare, and the cost of treatment in such cases is rather high. Therefore, more cases of immunotherapy-related AEs would be conducive to more accurate evaluation of AE cost for patients using durvalumab. In addition, the benefits of durvalumab + chemotherapy would be overestimated in this model. Third, due to the lack of complete quality-of-life data to calculate the utility values, we referred to the mean health utility value of NSCLC in PD, and corrected the utility values by considering the disutility values of AEs, and only grade 3/4 AEs were included, which might have led to overestimates or underestimates of the utility values. Finally, the CASPIAN trial did not provide the Kaplan-Meier curve for each subgroup, making it impossible to run the model completely for each subgroup, and the original group balance produced by randomization may not exist in the subgroups; thus, results of the subgroup analyses should be interpreted with caution.

Our findings showed that durvalumab in combination with platinum-etoposide as first-line treatment is not cost-effective compared with chemotherapy alone in patients with extensive-stage SCLC from the US payer standpoint. 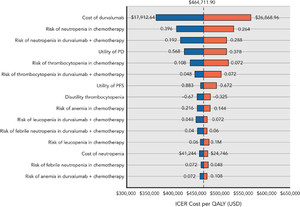 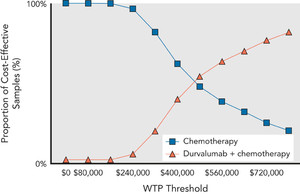