Management of pain and distress is a critical aspect of cancer care with significant impact on quality of life.1,2 Among patients with breast cancer, 25% to 89% experience pain along the disease trajectory and 25% to 60% report chronic pain related to cancer treatment.3–5 Psychologic distress affects up to 50% of survivors of breast cancer and may lead to increased consumption of various psychotropic medications.6–8 Opioids remain the mainstay treatment of cancer pain, placing patients at risk for misuse, dependence, and other adverse effects.9 These risks amplify with prolonged use, especially when taken in combination with sedating medications and in older patients (aged >65 years).10–12

Current guidelines for prescribing opioids in patients with cancer focus on relieving acute pain or pain associated with advanced disease.13–16 A recent study of patients with cancer undergoing curative-intent surgery found that 10.4% had new persistent opioid use at 1 year, highlighting the need to minimize prolonged opioid treatment in the absence of active disease.17 Furthermore, although providers are cautioned against coprescribing benzodiazepines and opioids, the benzodiazepine lorazepam is an approved and frequently prescribed adjunct to antiemetic drugs for chemotherapy-related nausea.18 Few studies have evaluated short- and long-term opioid use in patients with breast cancer and are limited to single treatment modalities or descriptive statistics. Dispensing patterns of benzodiazepines in patients with breast cancer remain poorly characterized.

Given the prevalence of treatment-related pain and psychosocial consequences after a diagnosis of breast cancer, we hypothesize that opioid and benzodiazepine use after treatment remains high. We performed a retrospective cohort analysis using population-based data to evaluate new and persistent opioid and benzodiazepine use and risk factors among patients with breast cancer who received curative-intent treatment.

This study used data from the SEER-Medicare linked database from 2008 through 2015. This dataset represents 28% of the US population and contains demographic, clinical, mortality, and medication prescription information on Medicare beneficiaries with cancer.19 This project was reviewed by the Colorado Multiple Institutional Review Board and deemed exempt because all data were deidentified.

We selected female patients aged ≥66 years with stage 0–III first primary breast cancer diagnosed in 2008 through 2015. Supplemental eFigure 1 illustrates the study selection criteria (available with this article at JNCCN.org). We limited our sample to patients aged ≥66 years to obtain 12 months of claims data prior to diagnosis. We included patients undergoing the following curative-intent treatments: surgery, surgery plus radiation therapy (RT), surgery plus chemotherapy, and surgery plus chemoradiation therapy (CRT). Surgery was defined as lumpectomy or mastectomy. We required that treatment be initiated within 6 months of diagnosis, last no more than 6 months, and no additional treatments be initiated in the 12 weeks after treatment. Patients had to be continuously enrolled in Medicare Parts A, B, and D during a 12-month period before and after treatment initiation to ensure complete claims data. 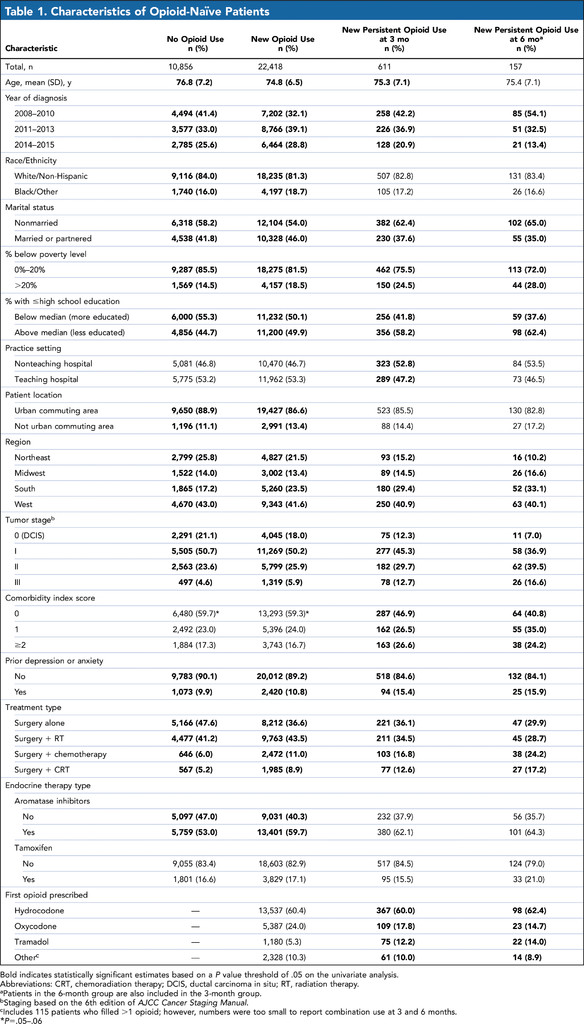 We performed chi-square tests to evaluate univariate associations with initial and persistent use of the medications of interest and used logistic regression to obtain multivariate estimates. Only patients with new medication use were included in analyses examining persistent use. We used the Kaplan-Meier method to determine median opioid and benzodiazepine prescription length after the end of treatment. We reported prescription length in weeks and censored patients with continued use beyond 6 months. We evaluated statistical significance at P<.05 and performed all analyses using SAS 9.4 (SAS Institute Inc). Observations with missing values were not included in the logistic analysis (n=24).

We identified 33,288 patients with breast cancer (stages 0–III) who were opioid-naïve at diagnosis and received curative-intent treatment in 2008 through 2015. The average age in the study population was 75.8 years. Most patients were White, unmarried, living in urban areas in the western part of the United States, and in census tracts with ≤20% of the population below the poverty level. Of patients undergoing curative-intent treatment in 2014 through 2015, a total of 9,249 were both opioid- and benzodiazepine-naïve. 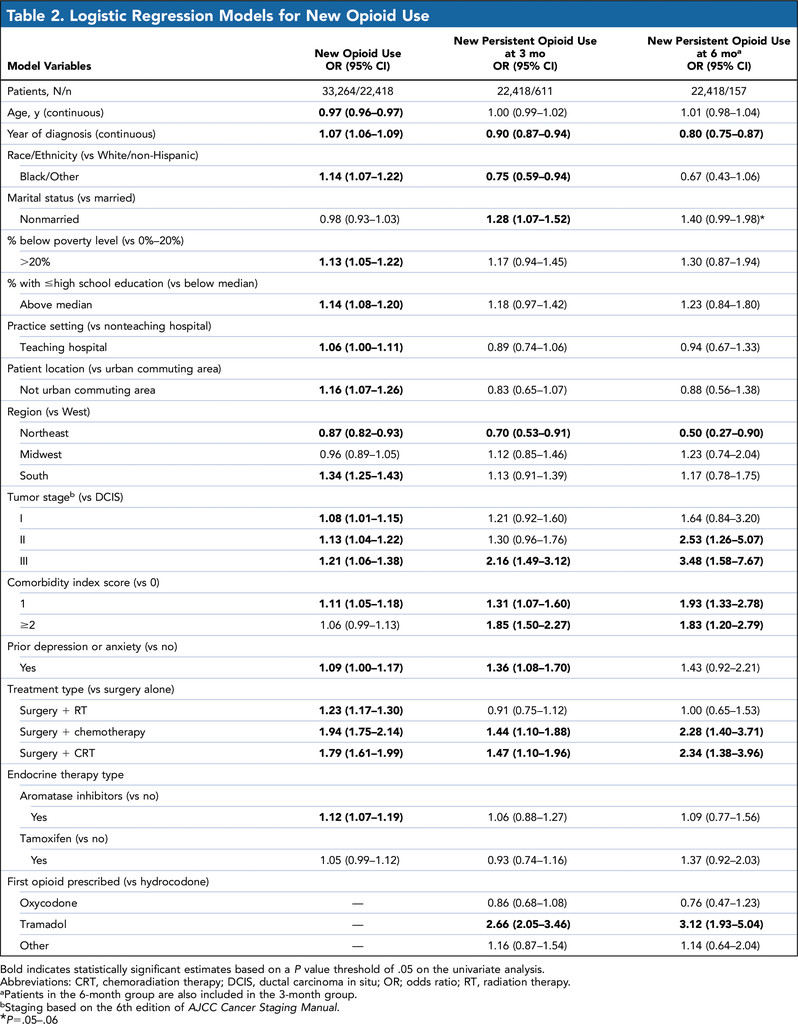 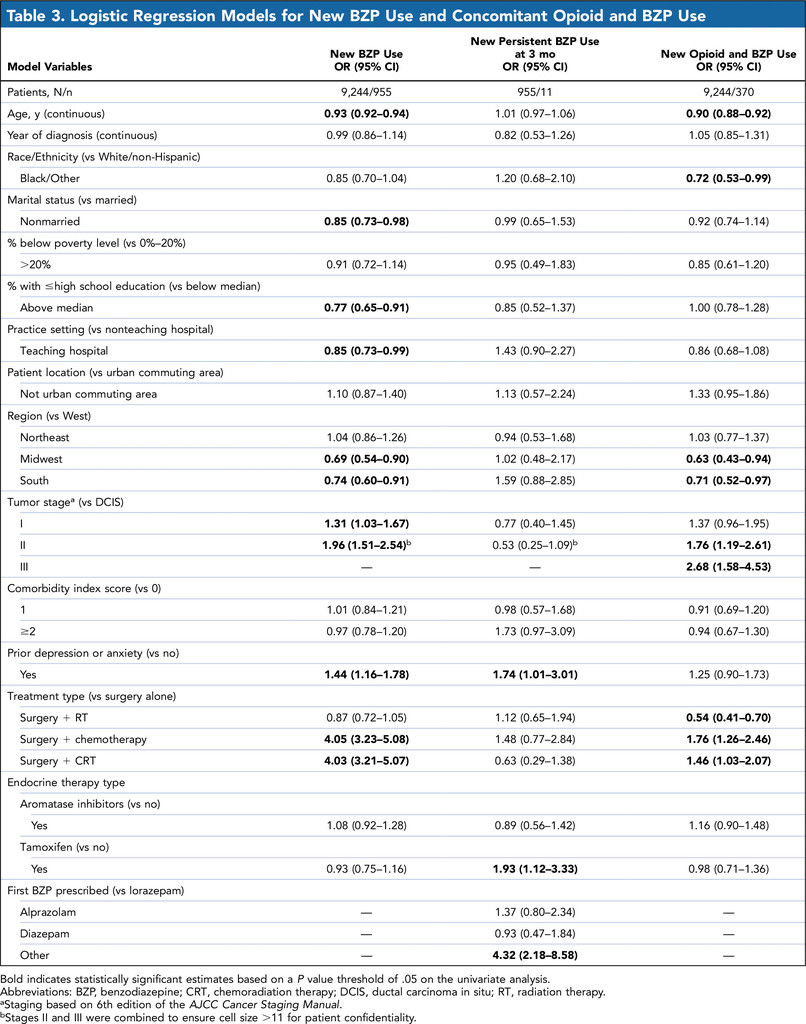 Concomitant Opioid and Benzodiazepine Use

Among opioid- and benzodiazepine-naïve patients diagnosed in 2014 through 2015, 370 (4.0%) filled new prescriptions for both during the observation period (eTable 2). Concurrent use was positively associated with advanced stages of disease, surgery plus chemotherapy, and surgery plus CRT, and negatively associated with increasing age, non-White race, and Midwestern and Southern regions (Table 3).

We present the largest study to date of opioid and benzodiazepine use in patients with breast cancer who underwent curative-intent treatment. Opioids were used by most patients during the treatment period; however, few developed new persistent opioid use. Long-term opioid use was associated with higher stages of disease, higher number of comorbidities, multimodality regimens, and type of initial opioid prescribed. Although a smaller percentage of patients received a new benzodiazepine, they were more likely to develop persistent use after treatment. Prior depression/anxiety, use of tamoxifen, and select benzodiazepines were the only treatment- or patient-related factors associated with long-term benzodiazepine use.

Almost two-thirds of opioid-naïve patients filled at least one opioid prescription. To our knowledge, only one prior study quantified the prevalence of opioid use among patients with breast cancer who received a similar combination of treatments.7 Although this study reported a lower rate of opioid use during the active treatment phase (25%), data were obtained from 1998 to 2011, during which they observed a dramatic rise in opioid use from 9% to 41%, respectively. This suggests that opioid use has continued to increase, possibly because of greater acceptance of opioids for the treatment of pain and concerns related to undertreatment of cancer pain.26–28 Our results are more comparable to the 57% of patients with breast cancer who received opioids during adjuvant endocrine therapy29 and the 31% to 45% during curative-intent chemotherapy.30 We also identified several treatment- and patient-related factors that were predictive of new opioid use. Aromatase inhibitors were associated with short-term opioid use, whereas tamoxifen was not. This finding differs from those of a recent population-based study that showed no significant relationship between adjuvant endocrine therapy type and opioid use.29

Our study showed that a small proportion of patients developed new persistent opioid use at 3 months (2.7%) and 6 months (<1%). These numbers are lower than the 10.4% reported in a recent study by Lee et al17 of patients with various cancer types undergoing curative-intent surgery. The study defined new persistent opioid use as previously opioid-naïve patients who filled an opioid prescription attributed to surgery and an additional opioid prescription between 90 and 180 days after surgery; however, adjuvant chemotherapy often extends beyond 90 days postoperatively, which may explain the differences. Patients in the study were also younger, which is an independent risk factor for opioid use.31,32 Similar to the study by Lee et al,17 our results demonstrated an increased likelihood of persistent opioid use when surgery was combined with chemotherapy with or without radiation therapy (RT). Although the combination of surgery and RT was associated with increased short-term opioid use, there was no significant association with long-term use. This may be because of advances in RT that provide more targeted and less painful treatment, whereas chemotherapy-induced pain remains a challenge.33–35

Initial use of tramadol was associated with long-term opioid use, which is similar to findings reported in patients without cancer.36 Despite the low percentage of patients prescribed tramadol, our results suggest that a choice of a different opiate should be considered. History of depression/anxiety, number of comorbidities, and advanced disease have been shown to contribute to opioid use in patients with breast cancer22; our study adds to this literature by better understanding the association with persistent opioid use after treatment, which may be the more relevant patient outcome. Although new short-term opioid use in patients with breast cancer may be increasing, our findings suggest that long-term opioid use has declined over time.

Risk factors for benzodiazepine use during and after breast cancer treatment have not been previously reported. Multimodality treatment that includes surgery combined with chemotherapy with or without RT was associated with a 4-fold increased risk of benzodiazepine use during the treatment period. This is not unexpected because chemotherapy is highly emetogenic and recent guidelines support the use of benzodiazepines as adjunctive treatment.18 Patients receiving tamoxifen were almost twice as likely to continue benzodiazepines 3 months after treatment. Providers may favor prescribing benzodiazepines because of data suggesting that certain selective serotonin reuptake inhibitors (SSRIs) increase the risk of breast cancer recurrence when used concurrently with tamoxifen.38–41 For example, paroxetine, fluoxetine, and sertraline are potent inhibitors of CYP2D6, an enzyme needed to convert tamoxifen into its active form, and are known to reduce the clinical efficacy of tamoxifen. Less potent inhibitors of CYP2D6, including citalopram and escitalopram, were not associated with an increased risk of recurrence, and noninhibitors of CYP2D6, including venlafaxine and mirtazapine, are thought to be at least equally as safe. Our results support that long-term benzodiazepine use is further driven by psychosocial distress, as anxiety and insomnia are the most commonly cited reasons for initiating and continuing benzodiazepines among breast cancer survivors.37 Lastly, although numbers for clonazepam and temazepam use are small, our results suggest that an alternative benzodiazepine should be considered.

Finally, there is a substantial body of literature documenting the undertreatment of pain, including cancer pain, among racial and ethnic minorities.49–53 Our findings show that non-White patients were more likely to receive a new opioid during treatment, but significantly less likely to receive opioids at 3 months after treatment. These disparities may be partly explained by financial and environmental barriers experienced by minority groups that impair long-term pain management.53 Furthermore, although non-White patients were less likely to receive an opioid plus benzodiazepine, we found no difference between racial groups regarding receipt of benzodiazepines alone. We speculate that patients may be more comfortable discussing anxiety and nausea than pain symptoms with their doctor, given that fear of reporting pain and failure of providers to initiate conversations about pain are common barriers to opioid prescriptions and effective pain management in minority cancer survivors.53,54

This study has several limitations. First, patients were aged ≥66 years, resulting in an older population compared with the national median age of 62 years for patients with breast cancer.55 Second, opioid and benzodiazepine use was determined by dispensing patterns, thus does not evaluate whether medications were actually consumed. Medications prescribed but not filled were not accounted for and may explain the subset of patients who did not receive prescriptions postoperatively. We were unable to determine indications for opioid and benzodiazepine use, and it is possible that prescriptions were provided for symptoms unrelated to a patient’s cancer diagnosis. The sample size was too small to assess persistent benzodiazepine use at 6 months after treatment. Lastly, we did not evaluate opioid strength or cumulative dosing.

We found that 67% of opioid-naïve patients with breast cancer receive opioids during curative-intent treatment. Although a small proportion of patients developed persistent use at 3 and 6 months, on a population level this translates to approximately 8,775 and 2,275 women per year, respectively. Only 10% of benzodiazepine-naïve patients with breast cancer receive benzodiazepines during treatment; however, persistent use at 3 months remains high, translating to >37,700 women annually. Encouraging use of select SSRIs among patients taking tamoxifen may be one strategy to reduce long-term benzodiazepine use. These findings demonstrate the importance of identifying high-risk patients, educating providers on nonopioid and nonbenzodiazepine approaches, and counseling patients throughout all phases of care.