Breast cancer is the most common cancer and the second leading cause of cancer mortality in women in the United States and globally, with approximately 270,000 women diagnosed in 2019 and >40,000 breast cancer–related deaths in the United States. The disease is localized to the breast in 62% of patients and to the breast and regional nodes in 30%.1 Primary preoperative systemic therapy (PST) is commonly used in patients with localized disease with a larger primary tumor or regionally advanced disease; it results in the downstaging of breast and regional nodal disease burden and facilitates breast conservation and/or less extensive axillary surgery.2 Upstaging to a higher regional stage or detection of metastatic disease may impact prognosis and management. Therefore, accurate staging of breast cancer is critical in prognostication and guiding local and systemic treatments and their optimal sequencing.

The NCCN Clinical Practice Guidelines in Oncology (NCCN Guidelines) for Breast Cancer recommend CT of the chest, abdomen, and pelvis with contrast and bone scan (CTBS) for staging of patients with clinically staged localized breast cancer (cT0–4N1–3 or T2–4N0) who are candidates for PST and who display clinical symptoms based on category 2B evidence.3 18F-fluorodeoxyglucose (18F-FDG) PET/CT is considered optional in circumstances in which CTBS is equivocal or suspicious. Prior studies reported greater sensitivity of PET/CT versus CT of the body for the detection of regional nodal metastases and distant metastases, and greater accuracy versus bone scan in the detection of bone metastases.4–6 One retrospective study by Niikura et al7 reported 97.4% sensitivity and 91.2% specificity for PET/CT imaging compared with 85.9% sensitivity and 67.3% specificity for conventional techniques, including CT, ultrasonography, radiograph, and bone scan, in detecting distant metastases. In regard to upstaging rates, studies have reported that approximately 15% of patients with initial clinical stage ≥IIB breast cancer were upstaged to stage IV breast cancer after systemic staging with PET/CT.8,9 Similarly, Riedl et al10 showed that PET/CT revealed unsuspected distant metastases in 17% of patients aged <40 years with clinical stage IIB breast cancer. A recent retrospective study by Yararbas et al11 showed that overall upstaging rates based on identification of extra-axillary regional lymph nodes and distant metastases were 18.6% of patients with initial stage IIA, 30% of those with stage IIB, and 46.3% of those with stage IIIA breast cancer after PET/CT.

Compared with CTBS, PET/CT has several potential advantages for staging that need to be considered, especially in patients who have locally advanced breast cancer and are candidates for PST before surgery who require an efficient and expeditious workup. These include greater patient convenience, reduced procedure time, and imaging with only 1 rather than 2 contrast/tracer injections. In addition, a PET/CT base-of-skull-to-thigh scan has a lower radiation dose than a combination of CTBS, 14 mSv, and 21 mSv, respectively.12,13 We report the results of a retrospective study evaluating upstaging rates after PET/CT as initial and/or only imaging study in patients with newly diagnosed clinical stage IIA–IIIC breast cancer who received PST before planned surgery, and our institution’s total Medicare reimbursement rates for PET/CT and CTBS.

This retrospective study was conducted at Montefiore Medical Center, the University Hospital of Albert Einstein College of Medicine and Albert Einstein Cancer Center, an NCI-designated cancer center, after approval of the Institutional Review Board and the Cancer Center Protocol Review and Monitoring Committee. We accessed Montefiore Medical Center “Clinical Looking Glass” software to identify all adult female patients with newly diagnosed breast cancer from January 1, 2014, through January 1, 2019, who underwent PET/CT within 4 months of their disease diagnosis. Electronic medical records were reviewed and the following exclusion criteria were applied: patients with stage IV disease, ductal carcinoma in situ, lobular carcinoma in situ, or stage I disease before PET/CT; treatments before PET/CT; and no adequate clinical follow-up of at least 1 year. Subsequently, patients with initial clinical stage IIA–IIIC breast cancer who underwent PET/CT before receiving PST were identified. Initial clinical stage was determined from physical examination, mammography, breast sonography, and in many cases MRI according to the AJCC Cancer Staging Manual, seventh edition.14 It was the policy of the breast medical oncology service at Montefiore Medical Center during this time period to recommend FDG PET/CT as the preferred imaging modality, unless CTBS was required by a patient’s health insurance carrier. Our analysis focused only on those who received a PET/CT scan within 4 months of diagnosis, and did not include patients who underwent CTBS scan without a PET/CT.

18F-FDG PET/CT images were obtained in 1 day after an intravenous administration of a weight-adjusted dose of 5.18 MBq/kg (0.14 mCi/kg) of 18F-FDG. Approximately 60 minutes after administration of the radiopharmaceutical, PET images from the base of the skull to midthigh were acquired using the Philips Gemini TF PET/CT scanner (Philips Medical Systems) in 3D acquisition mode. A low-dose CT scan was used for nonuniform attenuation correction.

As a normal protocol at our institution, a board-certified nuclear medicine physician with 18.3 ± 4 years of experience interprets the PET/CT studies. PET/CT was read in context with all other available imaging studies in accordance with best practices. We analyzed the data based on nuclear medicine physicians’ interpretations. According to standard FDG PET/CT reporting, abnormal uptake is defined as nonphysiologic, noninflammatory, and focal signal that has intensity greater than the local background. An imaging finding was considered positive for radiographic evidence of unsuspected regional nodal metastases when the radiologist reported a malignancy found outside of the N1 axillary region, such as subpectoral, internal mammary, or supraclavicular; imaging was considered positive for distant metastases when the radiologist reported disease in other organs besides the breasts. Histology was our preferred method of confirmation for malignancy in those positive PET/CT findings. However, in patients with unavailable histology, follow-up imaging study (MRI or CT) was used to confirm the distant metastases before patients received systemic therapy.

The overall upstaging frequencies and proportions, stratified by initial disease stage, were estimated and reported as percentages with 95% CIs. Data were expressed as medians (interquartile ranges [IQR]) for continuous variables and proportions for categorical variables.

As shown in Figure 1, a total of 415 adult female patients with newly diagnosed breast cancer who underwent PET/CT within 4 months of their diagnosis from January 2014 to January 2019 were identified. After applying study exclusion criteria, 283 patients with clinical stage IIA–IIIC breast cancer (280 with unilateral and 3 with bilateral disease) were evaluated. Stratified by treatments received after PET/CT, there were 227 patients with 230 breast cancers (3 with bilateral disease) who received PST including endocrine therapy or chemotherapy alone or plus anti-HER2 therapy, of whom the final study cohort consisted of 195 patients (196 cancers) with PET/CT as the initial imaging study.

Associations Between Clinical Parameters and Upstaging to Stage IV

We have found that approximately 37% of patients with clinical stage IIA–IIIC breast cancer who underwent 18F-FDG PET/CT before receiving primary PST before planned surgery showed more extensive disease, including 23% with more extensive regional nodal metastases and 14% with distant metastases. These rates are similar to upstaging rates that were previously reported in patients with localized breast cancer who underwent systemic staging with PET/CT.4 We also observed that the costs between CTs of the chest, abdomen, and pelvis with CTBS and PET/CT were comparable. Although the sensitivity of PET/CT in this setting seemed ideal, this result should be interpreted with caution because our study was not designed to examine the sensitivity of PET/CT relative to other imaging modalities. Nevertheless, the positive predictive value of 73% for detecting distant metastases supports the clinical utility of PET/CT as a screening tool for distant metastases in this setting, so long as distant recurrence is confirmed by histologic confirmation.

Regional extra-axillary lymph nodes, such as internal mammary, infraclavicular, and supraclavicular nodes (N2 and N3), can be clinically occult. Studies have shown that PET/CT can detect regional nodes with higher sensitivity than conventional imaging procedures such as contrast enhanced CT, ultrasound, or radiograph.4,5,15 Identification of regional nodal involvement can guide local treatment decisions and their optimal sequencing. Two prospective studies have shown that detection of extra-axillary regional nodal metastases on PET/CT resulted in modification of surgery or extension of radiation treatment fields.15,16 In the first study, Cochet et al15 found that the overall upstaging rate from N1 to N3 disease was approximately 20%, which was similar to the rate of 24% found in our study. Krammer et al16 also showed that a substantial number of patients (57%) with changes in local management had been upstaging from N1 to N3 disease.

In this study, we also found that some patients were downstaged by PET/CT. The highest downstaging frequency occurred in those with initial clinical stage IIIC breast cancer, wherein regional lymph node with N3 disease, identified on breast MRI and axillary ultrasound, was modified to N1 disease. This downstaging effect could result from the low specificity of nonfunctional imaging studies in detecting regional extra-axillary nodes.5

The strengths of this study are the large number of patients evaluated who received PST and the report of Medicare reimbursement cost differences between CT chest, abdomen, and pelvis with CTBS versus PET/CT. Systemic staging scans can be costly; the NCCN Guidelines3 recommend performing them only when indicated based on clinical symptoms in early-stage breast cancer. Although downstream costs were not included in our analysis, Merrill et al20 reported additional downstream costs, including follow-up scan and biopsy of $1,506 per patient, for patients who underwent systemic staging with PET/CT or CTBS when they were not clinically indicated.20

Our study has several limitations. Data were obtained from a single institution retrospectively with potential for inherent selection and interpretation biases, and we did not directly compare PET/CT with CTBS. In addition, histologic confirmation was not available for most patients with metastatic disease found on PET/CT. We also detected 10 false-positives for distant metastases, resulting in PET/CT specificity and a positive predictive value of 94% and 73%, respectively. Therefore, findings of distant metastases on PET/CT required additional histologic biopsy or corroboration with other imaging modalities. Finally, most cases in this study were ductal carcinoma in histology; therefore, the clinical utility of PET/CT in other histologies such as lobular carcinoma cannot be interpreted from this study.

Given the high detection rate, comparable cost, lower radiation dose, and greater patient convenience, PET/CT should be considered as an alternative to CTBS rather than considered as optional when systemic staging is clinically indicated in patients with stage IIA–IIIC breast cancer who require an efficient and expeditious workup before initiating PST prior to planned surgery. 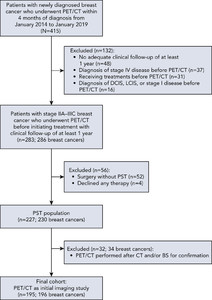