Background: The Controlled Study of Lanreotide Antiproliferative Response in Neuroendocrine Tumors (CLARINET) trial showed prolonged progression-free survival in patients initially treated with lanreotide versus placebo. We evaluated the cost-effectiveness of upfront lanreotide versus active surveillance with lanreotide administered after progression in patients with metastatic enteropancreatic neuroendocrine tumors (NETs), both of which are treatment options recommended in NCCN Clinical Practice Guidelines in Oncology for Neuroendocrine and Adrenal Tumors. Methods: We developed a Markov model calibrated to the CLARINET trial and its extension. We based the active surveillance strategy on the CLARINET placebo arm. We calculated incremental cost-effectiveness ratios (ICERs) in dollars per quality-adjusted life-year (QALY). We modeled lanreotide’s cost at $7,638 per 120 mg (average sales price plus 6%), used published utilities (stable disease, 0.77; progressed disease, 0.61), adopted a healthcare sector perspective and lifetime time horizon, and discounted costs and benefits at 3% annually. We examined sensitivity to survival extrapolation and modeled octreotide long-acting release (LAR) ($6,183 per 30 mg). We conducted one-way, multiway, and probabilistic sensitivity analyses. Results: Upfront lanreotide led to 5.21 QALYs and a cost of $804,600. Active surveillance followed by lanreotide after progression led to 4.84 QALYs and a cost of $590,200, giving an ICER of $578,500/QALY gained. Reducing lanreotide’s price by 95% (to $370) or 85% (to $1,128) per 120 mg would allow upfront lanreotide to reach ICERs of $100,000/QALY or $150,000/QALY. Across a range of survival curve extrapolation scenarios, pricing lanreotide at $370 to $4,000 or $1,130 to $5,600 per 120 mg would reach ICERs of $100,000/QALY or $150,000/QALY, respectively. Our findings were robust to extensive sensitivity analyses. The ICER modeling octreotide LAR is $482,700/QALY gained. Conclusions: At its current price, lanreotide is not cost-effective as initial therapy for patients with metastatic enteropancreatic NETs and should be reserved for postprogression treatment. To be cost-effective as initial therapy, the price of lanreotide would need to be lowered by 48% to 95% or 27% to 86% to reach ICERs of $100,000/QALY or $150,00/QALY, respectively. 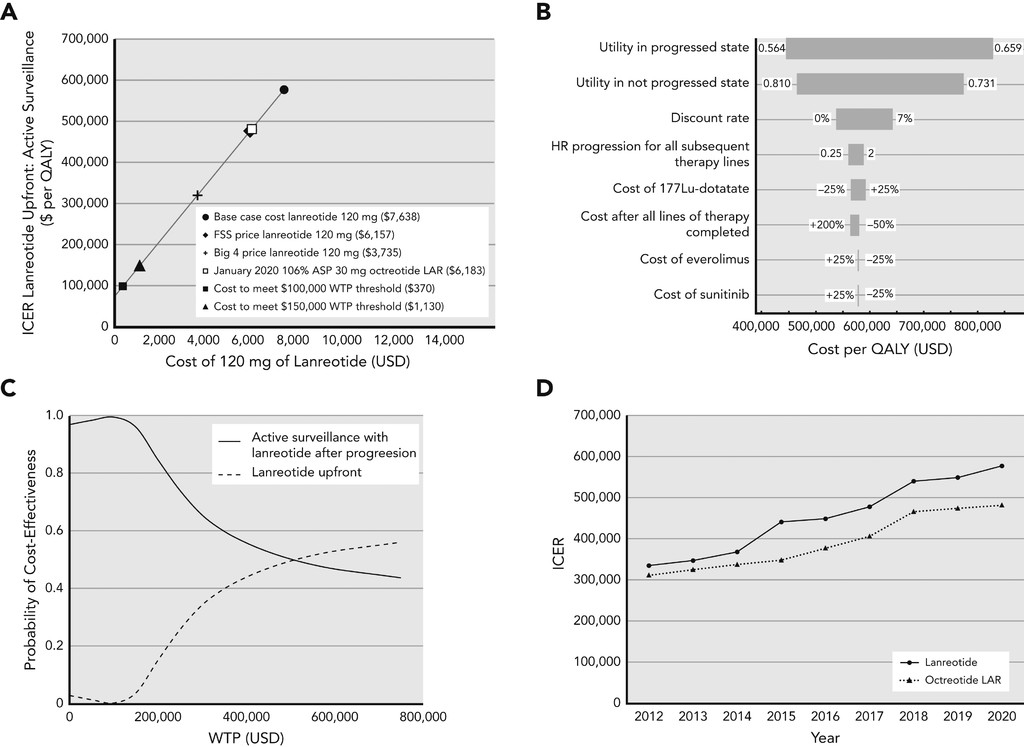 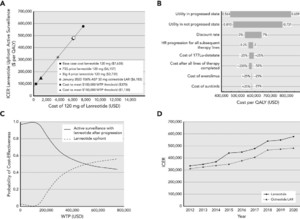