Non–small cell lung cancer (NSCLC) can no longer be considered as one disease, nor can it be treated as one. Understanding tumor histology in NSCLC is critical to understanding optimal biomarker evaluation and initial therapy. Proper biomarker evaluation includes both evaluation of PD-L1 status, as well as testing for actionable oncogenic drivers such as EGFR, ALK, ROS1, BRAF, Met Exon 14, RET, and NTRK. For patients with NSCLC and a driver oncogene, preferred treatment is targeted therapy. Conversely, for those without an oncogenic driver, preferred initial treatment is pembrolizumab in combination with chemotherapy for patients with low PD-L1 expression (1%–49%) or as a single-agent for high PD-L1 expression (≥50%). For small cell lung cancer (SCLC), the first major NCCN Guideline changes occurred in 2019, with the addition of either atezolizumab or durvalumab to platinum-based chemotherapy and etoposide as first-line therapy for patients with extensive-stage SCLC.

Outcomes in non–small cell lung cancer (NSCLC) are improving in part to the integration of molecular analysis and PD-L1 testing into standard practice. Classifying and treating these malignancies according to their oncogenic driver mutations and level of PD-L1 expression informs initial therapy for patients, which in turn translates to more tailored treatments and better outcomes, according to Gregory J. Riely, MD, PhD, Vice Chair of Clinical Research, Department of Medicine, Memorial Sloan Kettering Cancer Center. The first step to determining initial therapy for lung cancer is histology. “This is what we've been doing for 50 years, and it still guides our approach to treatment,” he said at the NCCN 2020 Virtual Annual Conference. “One of the reasons we use histology is to help determine which patients need which biomarkers evaluated,” he said.

NSCLC is classified according to mutations and gene fusions. The guidelines highlight some key molecular subtypes that should be included in molecular testing: EGFR sensitizing mutations, ALK gene rearrangements, ROS1 rearrangements, BRAF mutations, RET rearrangements, mutations that lead to MET exon 14 skipping, and NTRK fusions. Identifying these molecular targets informs the initial course of treatment for patients with NSCLC. Beyond molecular testing, all patients (regardless of histology) should have PD-L1 testing (negative, low, and high). “The way PD-L1 testing is done is a bit of a moving target right now, but I would emphasize that it has to be performed for all patients with NSCLC,” said Dr. Riely. “Testing results lead to different pages of the NCCN Guidelines, which in turn guides therapy for individual patients,” he said.

“EGFR-sensitizing mutations are the molecular subtype we've known about and have been treating the longest,” he said. Multiple randomized trials have shown that EGFR tyrosine kinase inhibitors (TKIs) are better than platinum-based doublets for patients with EGFR-mutant (positive) metastatic NSCLC, and the data for gefitinib, erlotinib and afatinib have all demonstrated this benefit.2–5

According to Dr. Riely, all patients will develop acquired resistance to these EGFR TKIs. But a second mutation, EGFR T790M, has been identified in approximately 66% of patients at the time of acquired resistance, which can be targeted with the third-generation EGFR TKI osimertinib.6 “Osimertinib is the newest drug in this arena,” he noted. “It targets both EGFR L858R exon 19 deletions, EGFR exon 29 deletions, and EGFR T790M, and importantly, it's relatively sparing of wild-type EGFR.” In clinical trials, osimertinib has demonstrated superiority over platinum-based chemotherapy in the presence of EGFR T790M mutations in the context of resistance.7

Not long ago, the treatment paradigm for patients with EGFR-mutant metastatic NSCLC included a first-generation TKI in the frontline setting, followed by osimertinib for patients with T790M mutations or chemotherapy for those without T790M mutations. This led to the question of whether osimertinib might be effective in the first-line, and a clinical trial demonstrated a significant progression-free survival (PFS) benefit for osimertinib compared with gefitinib/erlotinib as first-line treatment for advanced NSCLC (18.9 vs 10.2 months; P<.001).8 The trial also showed an overall survival (OS) benefit in patients on osimertinib.9 “I think the truly impressive thing was seeing a median OS for patients with EGFR-mutant lung cancer that exceeds 3 years,” he noted. “That's a dramatic improvement from what we once saw, but clearly shows us that we have a long way to go.”

Based on these data, osimertinib was added to the NCCN Guidelines for NSCLC as the preferred first-line treatment for patients with sensitizing EGFR mutations and metastatic NSCLC. According to Dr. Riely, more recent data suggest that erlotinib + ramucirumab may lead to similar PFS compared with osimertinib,10 although this drug combination is still only listed as “other recommended” in the current guidelines.

Crizotinib has previously demonstrated longer PFS than cisplatin/pemetrexed in the first-line treatment of patients with ALK-positive NSCLC.11 “But while crizotinib was showing its value, second-generation ALK inhibitors were being developed such as alectinib, ceritinib, and brigatinib,” he said. These drugs are more selective for ALK, but don't have a notable effect on MET (the original target of crizotinib). Additionally, they can inhibit mutated ALK (a mechanism of resistance), and importantly, they may have greater activity in the central nervous system, he added.

Initial clinical data for alectinib in patients with ALK-positive metastatic NSCLC previously treated with and have developed resistance to crizotinib showed “striking benefits” in patients on alectinib.12 “There are similar data for both ceritinib and brigatinib, suggesting that these second-generation ALK inhibitors all had the ability to overcome resistance to crizotinib,” he said. This led to a similar question to the one posed for patients with EGFR-mutated tumors: should patients with ALK-positive metastatic NSCLC be started on second-generation ALK inhibitors?

Data from clinical trials comparing second-generation ALK inhibitors to crizotinib showed a clear survival benefit for the newer ALK inhibitors.13,14 In patients with ALK rearrangements discovered before first-line systemic therapy, the preferred treatment outlined in the current NCCN Guidelines is now alectinib; other recommended treatments include brigatinib and ceritinib. “I think these decisions around preference were related to toxicities observed,” noted Dr. Riely.

Available drugs and preferred first-line treatments for the 7 actionable molecular subtypes of NSCLC highlighted in the NCCN Guidelines are listed in Figure 2.

According to Dr. Riely, for the majority of patients with metastatic NSCLC, decision-making in regard to first-line treatment is focused around PD-L1 status. In patients with high PD-L1 expression (≥50%), the PD-1 inhibitor pembrolizumab previously demonstrated a dramatic improvement in PFS compared with chemotherapy.15 Updated OS data from this trial has shown a significantly improved median OS versus chemotherapy.16 “Even though there was crossover allowed, the median OS [with pembrolizumab] is now approaching 2.5 years,” he said.

Although pembrolizumab and other immune checkpoint inhibitors are associated with fewer adverse events (AEs) than chemotherapy, specific immune-related AEs are associated with these treatments, including reactions like hypo/hyperthyroidism, which can usually be easily managed, but also more serious side effects such as severe skin reactions, colitis, nephritis, and Type 1 diabetes. “These are important AEs to know about so clinicians can anticipate management in patients who received pembrolizumab,” said Dr. Riely.

Similar trials have been conducted in the first-line setting comparing nivolumab and durvalumab to chemotherapy and using different PD-L1 cut points (5% and 25%), but they have produced negative results. However, more recent data support the use of single-agent atezolizumab using a novel PD-L1 assay. “This may make it into the guidelines in the future,” he added. [Editor’s Note: Atezolizumab monotherapy was added to the NCCN Guidelines for NSCLC during the version 5.2020 update.]

Patients with metastatic NSCLC and lower PD-L1 staining (<50%) are typically recommended for initial treatment with chemotherapy + anti–PD-1/PD-L1 therapy if they have no contraindications to this therapy. In patients with newly diagnosed metastatic non-squamous NSCLC without EGFR or ALK mutations, an influential trial demonstrated that the addition of pembrolizumab to standard chemotherapy resulted in significantly longer OS and PFS compared with chemotherapy alone.19 “Importantly, the benefits observed in this trial were seen even in patients with PD-L1–negative expression,” he said. “In the subgroup where we’d think the addition of pembrolizumab would have the least benefit (PD-L1 <1%), the hazard ratio for OS was 0.59.”

Pembrolizumab is not the only immunotherapy drug to demonstrate value when given in combination with chemotherapy. The addition of atezolizumab to carboplatin/paclitaxel/bevacizumab also demonstrated a significant survival benefit in patients with nonsquamous NSCLC, regardless of PD-L1 expression and EGFR or ALK genetic alteration status.20 The chemo-immunotherapy data for squamous cell lung cancer are similar, and have shown PFS and OS improvements with the addition of pembrolizumab to carboplatin and a taxane,21 and a PFS benefit only for atezolizumab when added to carboplatin and a taxane.22

The combination of ipilimumab and nivolumab improved OS compared with chemotherapy alone in patients with metastatic or recurrent NSCLC who had no prior anticancer therapy, regardless of their PD-L1 status.23 Based on the results of this trial, on May 26, 2020, the FDA approved the combination of nivolumab + ipilimumab + chemotherapy for the first-line treatment of patients with metastatic NSCLC regardless of tumor PD-L1 expression.

“Importantly, the control arm in this trial was chemotherapy alone,” noted Dr. Riely. “It was not what I think many of us would consider the control arm of today, which would have been chemotherapy + pembrolizumab or chemotherapy + bevacizumab/atezolizumab.” Dr. Riely noted an important caveat to this study: less chemotherapy does not mean less toxicity. “One of the reasons people wanted to explore the value of a chemotherapy-free regimen was the potential for less toxicity, but serious treatment-related AEs in the nivolumab/ipilimumab group were actually significantly higher,” he said. “So although there's no chemotherapy in the nivolumab/ipilimumab arm, it has a significant toxicity profile and is not to be underestimated.”

For SCLC, he added that the first major guideline changes occurred in the past year, with the addition of either atezolizumab or durvalumab to platinum-based chemotherapy and etoposide for the first-line treatment of extensive-stage SCLC.24

After histology, then biomarker evaluation.

NSCLC is no longer one disease. 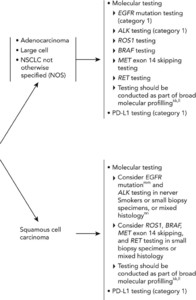 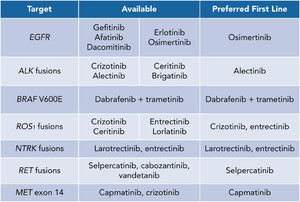