Background: Immune checkpoint inhibitors have been approved for treatment in metastatic non-small cell lung cancer (mNSCLC), presenting new options for care, either as monotherapy or in combination with chemotherapy. Given this new treatment paradigm, it is imperative to consider the benefit-risk trade-offs patients (pts) are willing to make among potential treatment options. This study sought to quantify the preferences of pts for attributes associated with chemotherapy and immunotherapy for mNSCLC. Methods: Pts with mNSCLC completed an online, cross-sectional survey where preferences were assessed using a discrete choice experiment (DCE), which was designed based on qualitative research with pts and confirmed with cognitive interviews. The DCE consisted of a series of choice tasks, where two hypothetical treatment profiles were shown side-by-side, and pts chose which they most preferred. The profiles varied with respect to levels for 7 attributes associated with first line (1L) treatment (Table 1). Hierarchical Bayesian modeling was used to estimate preference weights for each attribute level. Results: Pts (n=308) had mean age of 64 years and were diagnosed a mean of 1.8 years ago; 18%, 29%, and 53% self-reported being on 1L, second line, or third or later line therapy, respectively. Increasing OS from 11 to 30 months was most important to pts, followed by decreasing the risk of a Grade (G) 3/4 adverse event (AE) from 70% to 18% (Figure 1). These attributes were over three times more important than each of the other attributes measured. Least important to pts was decreasing the risk of all G pneumonitis from 8% to <1%. Pts were willing to accept an increase in the risk of a G3/4 AE from 18% to 70%, all G nausea from 10% to 69%, and all G neuropathy from 5% to 39%, if OS increased by 17, 4, and 2 months, respectively. In addition, pts would require an increase in OS of 1 month to accept an increase in G3/4 fatigue from 1% to 12% or all G pneumonitis from <1% to 8%. Preferences did not differ by age. Conclusions: This study showed that pts were willing to make trade-offs between efficacy and toxicity. Specifically, this study demonstrated that to accept a higher risk of AEs, pts require an increase in OS of up to a year and a half. These results can provide guidance to oncologists when counseling pts about selecting among available 1L treatments for mNSCLC and underscore the need for pt-doctor discussions about the benefits and risks of treatment. 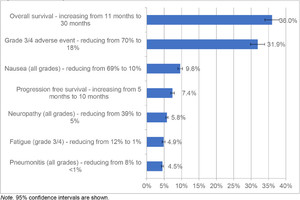