Treatment Outcomes in Chronic Myeloid Leukemia: Does One Size Fit All?

With the success of tyrosine kinase inhibitors (TKIs) in achieving next-to-normal overall survival in chronic myeloid leukemia (CML), treatment-free remission (TFR) has become a significant goal in the management of this disease. Discontinuation of therapy is attractive to both patients and physicians because maintaining a stable BCR-ABL transcript level without therapy would imply true operational CML cure. With TFR, patients are not exposed to unknown long-term adverse effects of TKIs and common adverse effects that may affect quality of life. Several factors need to be considered before attempting TFR, because this goal is not appropriate for a significant proportion of patients with CML. Patient-related factors, CML response to therapy and its duration, monitoring capacity, patient preferences and compliance with monitoring, and economic factors influence the decision to attempt to discontinue TKIs. Unfortunately, only 50% of patients are appropriate candidates for discontinuation of treatment. Of those, another 50% maintain stable disease while off TKIs. This means that merely 25% of patients achieve TFR. Further optimization and research are required to be able to extend this treatment goal to a larger population of patients. Although TFR is attractive and desirable, this goal is not a one-size-fits-all approach, and we should continue to focus on patients with CML having a normal OS with the best quality of life possible. 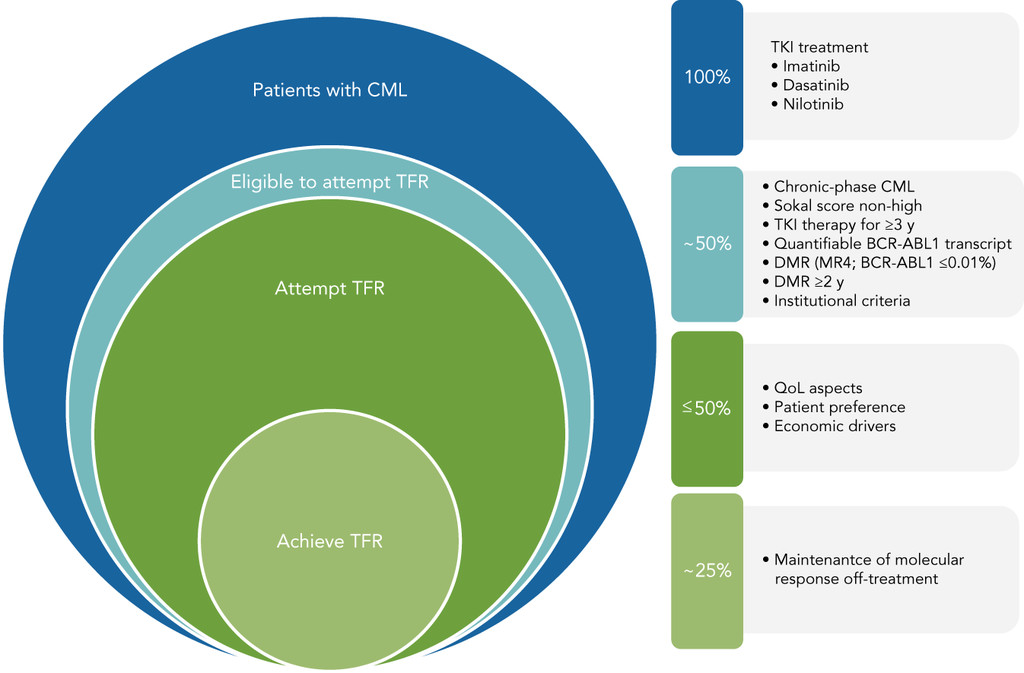 Representation of patients who attempt and achieve TFR. Bosutinib and ponatinib are not included because there is no evidence of TFR with these TKIs. QoL and economic drivers may play a positive role in attempting TFR, whereas patient preferences might be positive or negative drivers. Other clinical considerations must be taken into account when deciding to attempt TFR. 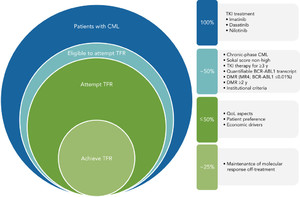