Performance status (PS) is an essential metric in cancer care.1–3 PS scores are based on estimations of the patient’s ability to perform activities of daily living and are commonly used to predict whether a patient can tolerate and respond to therapy.4 The most common adult PS scales in clinical practice are the ECOG PS and the Karnofsky performance status (KPS) scores.5,6 ECOG scores range from 0 (full ambulation without symptoms) to 5 (dead) and KPS scores range from 100 (full normal functioning) to 0 (dead).7–9

Patients with ECOG PS 0 to 1 are broadly considered to have a good PS and tend to have better clinical and survival outcomes.2,10,11 Such patients have been historically favored in clinical trials, which may influence trial results and subsequent FDA drug approvals.12 Similar practices may have important implications for the generalizability of trial findings, because a considerable proportion of patients with cancer do not present at diagnosis with good PS, which portends poorer survival.8,9,13–15 A striking example is lung cancer, in that more than one-third of patients with lung cancer present with poor PS (ECOG PS ≥2).13

To understand the landscape of PS restriction, we analyzed a large collection of phase III cancer randomized clinical trials (RCTs). We identified trial-related factors associated with the use of PS-restrictive eligibility criteria (defined as the inclusion of only patients with ECOG PS ≤1) and analyzed the use of strict PS eligibility criteria over time. We further determined the actual patient accrual by PS across all trials.

A database query was performed through ClinicalTrials.gov to search for oncologic phase III RCTs as described in previous research.16 The following advanced search parameters were used: other terms: “cancer”; study type: “all studies”; status: excluded “not yet recruiting”; phase: phase III; study results: “with results.” This search yielded 1,239 trials. Trials were subsequently screened for therapeutic, cancer-specific, phase III, randomized, multiarm trials in adult patients. Figure 1 presents the trial screening and eligibility criteria adopted in this study based on the PRISMA methodology.17

Eligibility criteria for each trial were assessed through data provided by ClinicalTrials.gov along with the trial protocol and primary publication of trial results, if available. Trial screening and parameter identification were independently performed by 2 individuals. No Institutional Review Board approval was required because all data were based on publicly available trial-level data without use of protected health information; no informed consent was required.

Data regarding the use of inclusion or exclusion criteria based on patients’ PS were collected from ClinicalTrials.gov, the primary endpoint article publication, or attached protocols. Data regarding patient accrual breakdown by PS were obtained from primary publication of trial primary endpoint results. All PS results were coded and analyzed using the ECOG measure, because most trials included used the ECOG PS system; KPS-based data were converted to ECOG PS using previously described methods.7

Any trial that specified an upper PS restriction cutoff of an ECOG PS ≤1 was considered to have a strict PS exclusion criterion. Differences in the proportions of trials that had a strict exclusion criterion (ECOG ≤1) across groups were assessed using Pearson chi-square tests. Binary logistic regression was used for analysis of temporal changes in strict PS-restrictive eligibility criteria utilization. Statistical significance was set a priori at a 2-sided α of .05. All analyses were performed using SPSS Statistics, version 24 (IBM Corp).

Table 1 highlights specific trial factors associated with the use of strict PS inclusion criteria. Industry-funded trials had higher rates of PS-restrictive criteria compared with non–industry-supported trials (43.5% vs 25.6%, respectively; P<.001). Meanwhile, cooperative group trials had fewer PS restrictions than non–cooperative group–sponsored trials (30.3% vs 43.7%, respectively; P=.002). When analyzing trials by disease site, we found that lung cancer trials had the highest rates of strict PS restrictions (57.3%), and hematologic cancer trials had the lowest (16.8%; P<.001). Systemic therapy trials had the highest PS restrictions (45.1%; P<.001). Furthermore, the use of strict PS eligibility criteria did not differ between trials that met or did not meet their primary endpoint (P=.61). Finally, nearly half of trials (45.5%) that subsequently led to FDA drug approval had a strict PS inclusion criterion (Table 1). 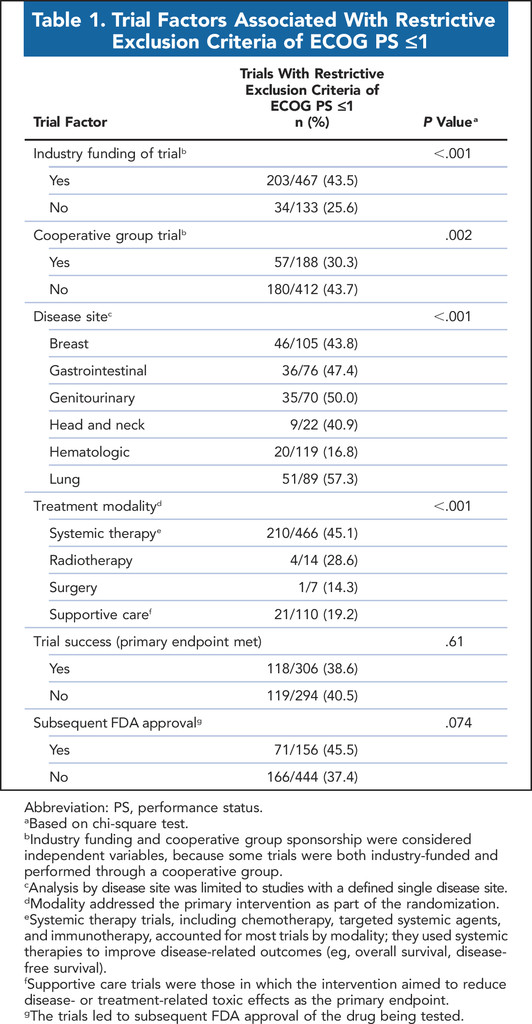 In this evaluation of cancer RCTs, a large proportion of trials (40%) had strict PS eligibility criteria, excluding patients with ECOG PS ≥2. Our data showed that the use of strict PS exclusion criteria did not improve over time, despite calls for reevaluating clinical trial eligibility criteria.12 The pervasiveness of strict trial eligibility criteria can lead to the underrepresentation of patients with poor PS in clinical trials. In that context, previously published data showed similar trends in the underrepresentation of older patients, female patients, and racial/ethnic minority patients.18 As such, the generalizability of phase III trial results is called into question.

A possible rationale behind the use of stricter PS eligibility criteria might be to ensure patient safety and treatment tolerance.19 However, recent data from patients receiving novel therapies, including immune checkpoint inhibitors, suggest similar toxicity profiles between patients with good and poor PS.20 Moreover, the scoring of PS is often subjective and dependent on physician interpretation of patients’ well-being.8,9 PS measures are mainly used to assess whether a patient would tolerate the use of systemic therapy, but they are also subjective regarding physician interpretation of the patient’s execution of activities of daily living (with emphasis on ambulatory status).4 As such, although some PS restrictions may be justified, the fundamentally subjective nature of PS may affect physician reporting based on protocol requirements. Thus, the inclusion and close monitoring of patients with poor PS, as an alternative to exclusion, could be considered in cancer clinical trials. In addition, including patients with poor PS is important to consider given that exclusion of these patients may impact study results because healthier patients tend to have better prognoses.1–3

In many malignancies, poor PS is often a risk factor for early mortality, which may in turn reduce the effect size of the intervention, hence leading trials to not meet their primary endpoint.10,11,21 Inclusion of patients with poor PS and a high risk for mortality may bias results, and trials may be underpowered and fail to show a true effect even when one exists. Increasing the heterogeneity of patients by PS within the trial population is therefore not without risk. Furthermore, both the absolute and relative effects of treatment may differentially impact patients by PS, which may contribute to heterogeneity if a wider spectrum of patients by PS are enrolled. On the other hand, differential effects of treatment across the PS gradient must be captured; if the relative benefit of an intervention is higher among patients with poor PS, for instance, then the imperative to ensure that patients with poor PS are adequately represented among trial participants is all the stronger. A potential solution to this issue is a trial design that stratifies patients by PS in order to ensure sufficient power across the PS range to measure effects in patients with both good and poor PS. Another option is to perform trials targeted for patients with poor PS only, in which special care and monitoring would be implemented to maintain patient safety. Along this line, 2 ongoing phase II lung cancer trials are focusing on patients with poor PS only (ClinicalTrials.gov identifiers: NCT00193336 and NCT00892710). Such trials would be analogous to studies that have restricted their inclusion criteria to older patients (ie, limiting trials to only patients aged ≥65 years).22 Furthermore, studies analyzing targeted therapy rather than cytotoxic chemotherapy may be particularly relevant in patients with poor PS, as those patients may be particularly susceptible to chemotherapy-induced toxicity (NCT02733159).20

Our study has some limitations worth noting. First, only 1 clinical trial registry based in the United States was screened, and therefore our findings may not apply to cancer trials accruing outside of the United States. Second, not all trial patients had PS information, and therefore selective reporting may affect the true profile of disparities by PS among trial participants. Nevertheless, although previous studies analyzed population discrepancies in clinical trials (age, sex, race), our study is the first to explore PS restrictions in cancer trials and quantify the absolute proportions of patients by PS accrued across trials.16,18

Use of strict PS restrictions in phase III cancer RCTs is pervasive. Moreover, the low accrual of patients with poor PS is strikingly common among cancer trials, irrespective of PS-specific trial eligibility criteria. The selective inclusion of healthy patients may severely limit the generalizability of trial results. Future trials should consider a more representative population with cancer, including more patients with poor PS who undergo close toxicity monitoring, to ensure better generalizability of results while maintaining patient safety. 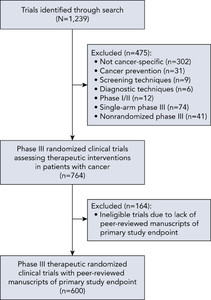