Background: Comorbidities and old age independently compromise prognosis of patients with colorectal cancer (CRC). The impact of comorbidities could thus be considered as conveying worse prognosis already at younger ages, but evidence is lacking on how much worsening of prognosis with age is advanced to younger ages in comorbid versus noncomorbid patients. We aimed to quantify, for the first time, the impact of comorbidities on CRC prognosis in “age advancement” of worse prognosis. Methods: A total of 4,602 patients aged ≥30 years who were diagnosed with CRC in 2003 through 2014 were recruited into a population-based study in the Rhine-Neckar region of Germany and observed over a median period of 5.1 years. Overall comorbidity was quantified using the Charlson comorbidity index (CCI). Hazard ratios and age advancement periods (AAPs) for comorbidities were calculated from multivariable Cox proportional hazards models for relevant survival outcomes. Results: Hazard ratios for CCI scores 1, 2, and ≥3 compared with CCI 0 were 1.25, 1.53, and 2.30 (P<.001) for overall survival and 1.20, 1.48, and 2.03 (P<.001) for disease-free survival, respectively. Corresponding AAP estimates for CCI scores 1, 2, and ≥3 were 5.0 (95% CI, 1.9–8.1), 9.7 (95% CI, 6.1–13.3), and 18.9 years (95% CI, 14.4–23.3) for overall survival and 5.5 (95% CI, 1.5–9.5), 11.7 (95% CI, 7.0–16.4), and 21.0 years (95% CI, 15.1–26.9) for disease-free survival. Particularly pronounced effects of comorbidity on CRC prognosis were observed in patients with stage I–III CRC. Conclusions: Comorbidities advance the commonly observed deterioration of prognosis with age by many years, meaning that at substantially younger ages, comorbid patients with CRC experience survival rates comparable to those of older patients without comorbidity. This first derivation of AAPs may enhance the empirical basis for treatment decisions in patients with comorbidities and highlight the need to incorporate comorbidities into prognostic nomograms for CRC. 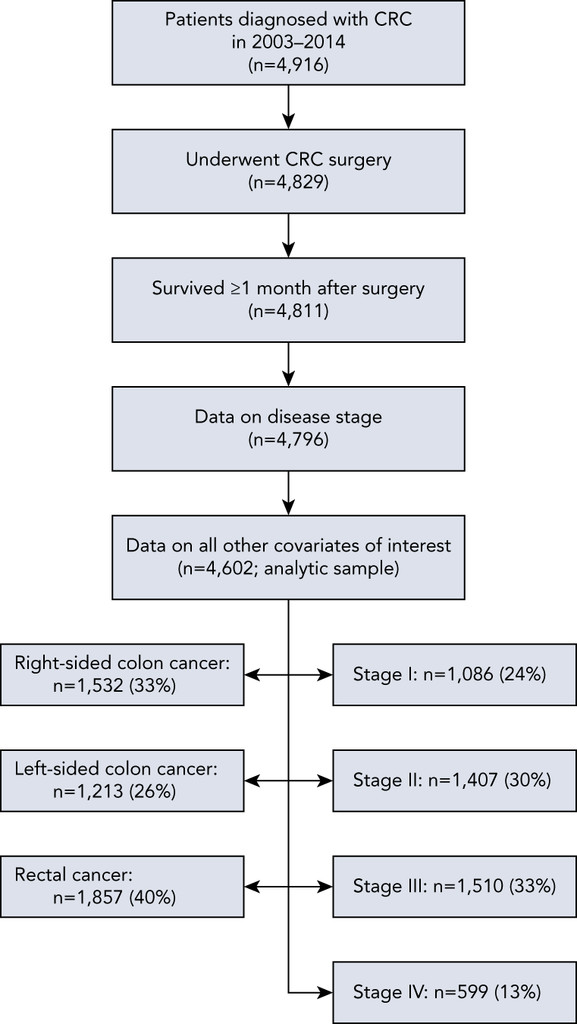 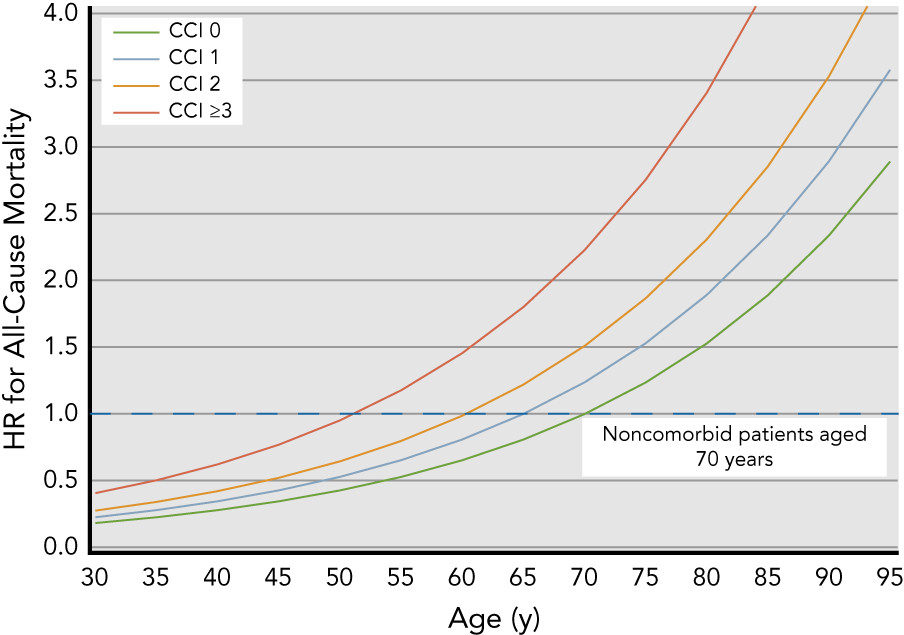 Adjusted survival curves for comorbidity and colorectal cancer prognosis by tumor stage: (A) I, (B) II, (C) III, and (D) IV. 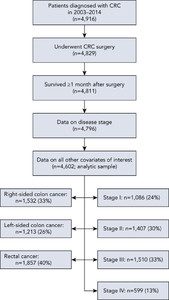 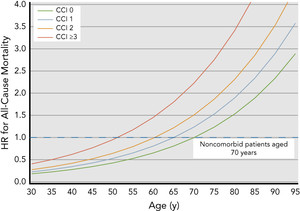 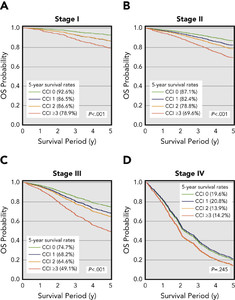