Conditional survival (CS) is routinely used in clinical practice. Specifically, clinicians invariably adjust the prognosis of individual patients according to the duration of event-free follow-up. Patients with longer event-free follow-up have a higher probability of remaining disease-free.1 However, the magnitude of improved survival is difficult to estimate.

Two studies2,3 address cancer-specific CS in patients with nonmetastatic renal cell carcinoma (nmRCC): one is a population-based analysis,2 whereas the other is a multi-institutional analysis from European and North American centers of excellence.3 Both studies are limited by their relatively historical populations. Moreover, the multi-institutional analysis offers a model for prediction of survival rates after nephrectomy in individual patients,3 whereas the population-based analysis provides estimates for the AJCC subgroupings.2 Consequently, neither study allows clinicians to assess CS according to T and N stage and substage groupings, such as pT1aN0 and pT1bN0. These limitations may be critical with respect to applicability and clinical usefulness.

Within the SEER database (2001–2015),4 we focused on patients aged ≥18 years treated with either partial or radical nephrectomy as primary treatment for either pT1aN0–pT4N0 or pTanyN1 nmRCC (ICD-O-3 site codes C64.9). Death was defined according to the SEER mortality code as either CSM (death from RCC) or other-cause mortality (death from any other causes). Exclusion criteria consisted of metastatic RCC; unavailable information on T and N stage, histology, and Fuhrman grade; diagnosis only on autopsy or death certificate only; and missing follow-up data.

Our analyses relied on 2 analytical steps. First, conditional 5-year CSM-free rate was quantified in surgically treated patients with nmRCC, according to T and N stage and substage groupings (pT1aN0 vs pT1bN0 vs pT2aN0 vs pT2bN0 vs pT3aN0 vs pT3b–cN0 vs pT4N0/pTanyN1). CS methodology was applied, as previously reported.1,5 Specifically, CS was calculated as the probability of survival for x additional years, given y years of accumulated survival. EFS time points used in the CS models consisted of from 1 year up to 10 years after surgery. Second, separate multivariable Cox regression (MCR) models predicting CSM were fitted to examine the possible variation for risk of CSM over time. Specifically, MCR models were fitted in the overall population at baseline (time zero) and, subsequently, 8 separate additional MCR models were fitted in patients who survived 1, 2, 3, 4, 5, 6, 7, and 8 years after surgery. The variables of interest were T and N stage, Fuhrman grade, and histologic subtype. Additional adjustment variables consisted of age, sex, ethnicity, and type of surgery. Finally, we tested for interaction between Fuhrman grade/histologic subtype and primary risk factor, namely T and N stages.

All statistical tests were 2-sided with a level of significance set at P<.05. Analyses were performed using R version 3.4.1 (R Foundation for Statistical Computing).

In MCR models predicting CSM (Figure 2, Table 3), tumor stage, Fuhrman grade, and histologic subtype were independent predictors of CSM risk. However, no interactions were identified. Regarding the effect of stage, relative to the referent pT1N0 stage, the magnitude of decreases in CSM hazard was virtually stable for pT2N0 (hazard ratio [HR], 3.3 at baseline to 2.6 at 96 months of event-free follow-up), intermediate for pT3N0 (HR, from 4.4 to 2.8, respectively), and highest for patients with pT4N0/pTanyN1 disease (HR, from 15.2 to 6.7, respectively).

For Fuhrman grade, relative to the referent grade 1, the CSM hazard was no more significant after 48 months of EFS for grade 2. Conversely, a decrease in the magnitude of CSM hazard risk was recorded for both grade 3 (HR, from 2.1 at baseline to 1.5 at 96 months of event-free follow-up) and grade 4 (HR, from 3.8 to 2.0, respectively).

Lastly, for histologic subtype, relative to the referent clear-cell histology, both chromophobe (HR, 0.4 at baseline to 0.5 at 96 months of event-free follow-up) and papillary histology (HR, from 0.8 to 0.6, respectively) were stable. Conversely, the CSM hazard was no more significant after 24 months of EFS for sarcomatoid.

CS represents an important entity as evidenced by previous reports in both genitourinary6–8 and other primaries.1,9,10 This notion was pioneered by Skuladottir and Olsen1 in patients with lung cancer in 2003. Despite the importance of CS and its universal use in patient counseling, only 5 formal studies specifically quantified CS in patients with RCC.2,3,11–13 Of these, 2 exclusively focused on metastatic RCC,11,13 showing that despite the aggressiveness and incurable nature of the disease, CS represented an important consideration in these patients, as evidenced by statistically significant and clinically meaningful improvements in CSM11 and overall mortality,13 provided there was EFS after diagnosis and/or initiation of systemic therapy.

Of the remaining 3 reports, only 22,3 addressed cancer-specific CS in nmRCC. Unfortunately, neither of these 2 studies provided stratified estimates of conditional CSM-free survival according to T and N stage and substage groupings. Substage stratification is particularly important in contemporary urologic practice, because most patients with newly diagnosed nmRCC have been shown to harbor T1a tumors.14 Moreover, patients with favorable disease characteristics, such as those with T1a or even T1b tumors, may have a dramatically different prognosis from their counterparts with more advanced disease stage. Nonetheless, equally important prognostic difference in CS may also exist between substages of T2 or even T3 nmRCC.

Based on these hypotheses, we performed a detailed analysis of CS within a large contemporary population-based cohort of nmRCC. Our analysis provided the first stratified CSM estimates according to T substages and is summarized as follows.

First, the largest proportion of patients harbor pT1aN0 (n=35,966; 46.2%) and pT1bN0 (n=18,858; 24.2%) substages, followed by pT3aN0 (15.2%), pT2aN0 (7.7%), pT2bN0 (3.2%), pTanyN1 (1.7%), pT3b–cN0 (1.3%), and pT4N0 (0.5%) stage and substages groupings. Consequently, from a clinical and epidemiologic perspective, stratification according to T and N stage and substage groupings is particularly important in the most frequent subgroupings, namely pT1aN0 and pT1bN0. Nonetheless, from the perspective of individual patient counseling, stratification of CS based on prognosis is equally important in those with more advanced disease, such as pT3N0, pT4N0, and even pTanyN1, based on substantially worse prognoses for these individuals. This point validates the need for substage stratification of CS.

Second, CS estimates after 5-year EFS ranged from a maximum of 97.7% to a minimum 70.4% for patients with pT1aN0 and pT4N0/pTanyN1 disease, respectively. These results illustrate very important heterogeneity in the prognosis of surgically treated nmRCC according to stage and substage groupings, and again validate the rationale of our study, which reports stage and substage grouping stratification of CS estimates.

Third, patients with pT1aN0 disease show CS estimates that are virtually unchanged during a 10-year event-free follow-up (98.2% after 1 year vs 98.0% after 10 years). From a clinical perspective, this implies that ongoing follow-up of patients with pT1aN0 disease is based on a 2% CSM risk, indicating that 50 individuals should be investigated in an ongoing fashion to identify 1 that will eventually die. Despite these low CSM rates, current European guidelines15 do not define any particular time point at which follow-up should be interrupted. Similarly, the most recent version of the NCCN Clinical Practice Guidelines in Oncology (NCCN Guidelines) for Kidney Cancer16 at the time of writing did not recommend a specific cutoff with respect to duration of follow-up. Instead, follow-up should be tailored based on patient and tumor characteristics. We identified virtually the same phenomenon for patients with pT1bN0 disease, with the exception of CSM risk, which was recorded at 5%.

Several take-home messages warrant consideration. First, patients with pT1aN0 and pT1bN0 disease showed the lowest 5-year CSM rates, at 2% and 5%, respectively, and these did not change with the duration of event-free follow-up that ranged from 1 to 10 years. Conversely, for stages pT2aN0 to pT4N0/pTanyN1, event-free follow-up resulted in higher CSM-free rates. Second, the magnitude of CSM decrease was most significant in patients with pT4N0/pTanyN1 disease and least significant in patients with pT2aN0 disease. Third, in patients with pT2aN0 to pT4N0/pTanyN1 disease, the absolute decrease in CSM occurred after the shorter event-free follow-up interval in those with the most advanced stages, whereas it occurred over the longest interval in those with a less-advanced stage (pT2aN0). Lastly, the lowest substages (pT1aN0 and pT1bN0) represent the largest subgroups with the least attrition due to mortality over time. However, the highest T and N stage and substage groupings represent the smallest subgroup; nonetheless, the amount of attrition due to mortality is the highest. In summary, our findings should be considered in determining the duration of substage-specific follow-up for surgically treated patients with nmRCC disease. To the best of our knowledge, CS substage-specific follow-up protocols have not been adopted by either European Association of Urology15 or NCCN16 guidelines, especially for patients with pT1aN0 and pT1bN0 disease.

Despite the strengths of this study, important limitations need to be acknowledged. First, our data represents a retrospective analysis with high potential for selection biases. Second, our data that relied on CSM as an end point do not represent an ideal source for defining a specific surveillance protocol. Instead, recurrence and metastatic progression data, which are not available within the SEER database, should be used for that purpose. Nonetheless, our findings represent the most informative method of providing CS probabilities in surgically treated patients with nmRCC. Therefore, although our study could not rely on either recurrence or progression data, clinicians should be aware of changes in CS according to specific substages and should ideally incorporate them in decision-making. Third, no information about comorbidities is available in the SEER database. Fourth, because of the SEER coding system, we could not account for reclassification of AJCC staging from 2010 onward; we relied on the 6th edition of the AJCC Cancer Staging Manual for patients diagnosed from 2001 through 2009 according to the SEER database, and on the 7th edition for those diagnosed from 2010 onward. Specifically, adrenal invasion is classified as T3a in the 6th edition versus T4 in the 7th edition. Finally, the amount of detail is limited relative to smaller institutional studies. For example, laboratory values and performance status could not be assessed. However, these limitations apply to all population-based analyses that were based on SEER, the National Cancer Database, or other nation-based data repositories.

CSM risk showed important variability across the range of examined stage categories. For example, CSM risk of patients with pT1aN0 disease remained stable, even after 10-year event-free follow-up. Conversely, prognosis for patients with stage pT4N0/pTanyN1 disease may drastically improve in proportion to event-free follow-up duration. Our observations have critical importance for physicians regarding patient follow-up and counseling. 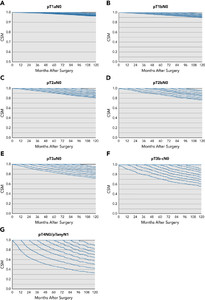 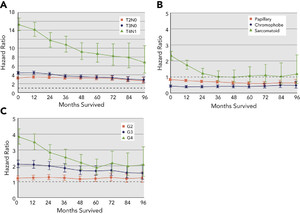