Background: Information about the frequency of cannabinoid use and the clinical characteristics of its users in oncology supportive care is limited. This study explored associations between cannabinoid use and cancer-related clinical characteristics in a cancer population. Patients and Methods: This retrospective review included 332 patients who had a urine drug test (UDT) for tetrahydrocannabinol (THC) together with completion of an Edmonton Symptom Assessment Scale (ESAS) and cannabinoid history questionnaire on the same day that urine was obtained during 1 year in the supportive care clinic. Results: The frequency of positive results for THC in a UDT was 22.9% (n=76). Significant statistical differences were seen between THC-positive and THC-negative patients for age (median of 52 [lower quartile, 44; upper quartile, 56] vs 58 [48; 67] years; P<.001), male sex (53.9% vs 39.5%; P=.034), and past or current cannabinoid use (65.8% vs 26.2%; P<.001). Statistical significance was observed in ESAS items between the THC-positive and THC-negative groups for pain (7 [lower quartile, 5; upper quartile; 8] vs 5 [3; 7]; P=.001), nausea (1 [0; 3] vs 0 [0; 3]; P=.049), appetite (4 [2; 7] vs 3 [0; 5.75]; P=.015), overall well-being (5.5 [4; 7] vs 5 [3; 6]; P=.002), spiritual well-being (5 [2; 6] vs 3 [1; 3]; P=.015), insomnia (7 [5; 9] vs 4 [2; 7]; P<.001), and total ESAS (52 [34; 66] vs 44 [29; 54]; P=.001). Among patients who reported current or past cannabinoid use, THC-positive patients had higher total scores and scores for pain, appetite, overall well-being, spiritual well-being, and insomnia than THC-negative patients. Conclusions: Patients with cancer receiving outpatient supportive care who had positive UDT results for THC had higher symptom severity scores for pain, nausea, appetite, overall and spiritual well-being, and insomnia compared with their THC-negative counterparts. These results highlight potential opportunities to improve palliative care.

There has been an emerging interest in the use of cannabinoids for treatment of various medical conditions.1 Many states have approved the use of medical-grade cannabinoids (medical marijuana) for numerous symptoms and conditions, including chronic pain, spasticity, seizures, anorexia, nausea, and glaucoma.2–4 In addition, marijuana has been highlighted as a potential immune-modulating or anticancer agent.5 Given the symptom burden reported by patients in the oncology outpatient supportive care setting, it is not surprising that patient and family inquiries about purported cannabinoid benefits for common cancer-related symptoms, such as pain, nausea, and poor appetite, have become more frequent as medical marijuana programs have proliferated.6 Patients’ presumption of the positive effects of cannabinoid use are common during such discussions, and interest in exploring benefits are often expressed.7–9

In general, cannabinoids are classified into 3 major categories: endogenous, synthetic, and plant-derived. Anandamide and 2-arachidonylglycerol are naturally occurring and seem to be widely involved in regulatory functions through agonist or antagonist effects on not only cannabinoid receptors CB1 and CB2 but also certain ion channels10,11 or orphan receptors.12–17 Complex biologic actions and pathophysiologic mechanisms of cannabinoids have been proposed.18 Numerous synthetic chemical compounds have been synthesized,19 and >60 biologically active compounds derived from Cannabis sativa have been isolated.13 The pharmacokinetics and dynamics vary, depending on the source, concentration, delivery route, and ratios between the multiple plant-derived compounds and duration of exposure.20 Therefore, a variety of standardized, plant-derived, or synthetically produced cannabinoid products have been developed for medical use (medical-grade).20 In contrast, non–medical-grade products are nonstandardized and contain unknown amounts of cannabinoids.21

The Edmonton Symptom Assessment Scale (ESAS) has well-established reliability and validity when used in patients with cancer as a routine self-assessment tool.22 Patients use the ESAS to score their average symptom severity during the 24 hours before presenting for an outpatient clinic visit; the score is based on an 11-point numeric rating scale from 0 (absence of symptom) to 10 (worst intensity).23 We sought to determine the positive rate of cannabinoid metabolites through urine drug testing (UDT) and compare ESAS characteristics among patients with positive versus negative test results.

A retrospective medical records review was performed to identify reported differences in symptom characteristics of cannabinoid users and nonusers based on UDT results in the supportive care outpatient clinic at Moffitt Cancer Center from July 2015 through June 2016. Institutional Review Board approval was obtained. Medical records were reviewed for demographic data, presence of urine tetrahydrocannabinol (THC), ESAS-reported symptom severity, and personal report of cannabinoid use. Among 919 outpatients, 332 who underwent UDT and completed the self-reported questionnaire on the day of urine sampling were identified and included (Figure 1).

All analyses were performed using SPSS Statistics, version 25.0 (IBM Corporation). The Kolmogorov-Smirnov method and Levene’s test were used to assess the normality and equality of variance assumptions, respectively. Continuous variables were presented as median (lower quartile; upper quartile) and categorical data as frequencies and percentages. The Mann-Whitney U test, chi-square test, or Fisher exact test was used to compare the endpoints between the THC-positive and THC-negative groups based on UDT. ESAS individual symptom severity scores and total scores were compared between the urinary THC-positive and THC-negative groups. Multiple logistic regression models were used to assess the differences in ESAS scores between the 2 groups, adjusted for age, sex, and cancer type. Statistical significance was declared for 2-sided P values <.05.

Of 332 patients, 76 (22.9%) had positive UDT results for cannabinoid metabolites (nor-9-carboxy-Δ9-tetrahydrocannabinol [THC-COOH]). Only 2 of these patients (2.6%) were prescribed synthetic cannabinoids, which also can be detected in urinary THC, and were enrolled in the THC-positive group. 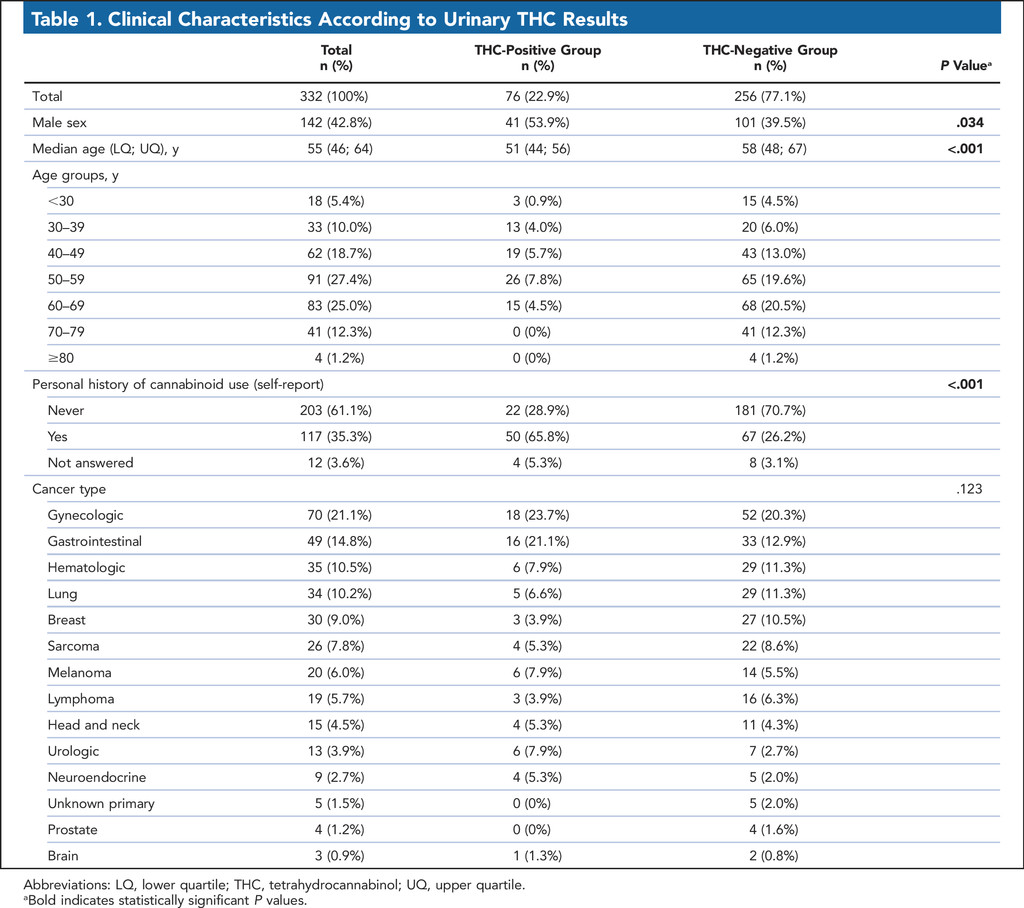 Presence of the urine cannabinoid metabolite THC-COOH indicates that a patient was exposed to synthetic or plant-derived cannabinoids within approximately the past 10 days, but its concentration does not correlate with the amount, route, or frequency of use.30 Information about the prevalence of cannabinoid use in patients with cancer is limited. In one recent study at another comprehensive cancer center in a state that has approved the use of marijuana for medicinal and recreational purposes, the frequency of positive UDT results for THC was 14%.26 The state of Florida, where our study was conducted, was not actively dispensing state-authorized marijuana during our study period. In our data, the frequency of THC positivity was 22.9%, and the urinary THC-positive group was younger and predominantly male, and reported a history of cannabinoid use more frequently than the urinary THC-negative group. In our study, underreporting of cannabinoid use was evident, with UDT yielding THC-positive results for 10.8% of patients who denied use on clinic screening questionnaires.

There are several potential explanations for these results. First, higher symptom burden with certain ESAS items may motivate patients to use cannabinoids. Second, using cannabinoids, especially unauthorized products or inappropriate use, could result in a higher symptom burden because of their own adverse effects. Third, cannabinoid users might have lower thresholds for certain symptoms than nonusers. Fourth, besides cannabinoid use, it is possible that suboptimal standard pharmacologic or nonpharmacologic symptom management resulted in higher ESAS scores among patients with THC-positive results. However, those symptoms might better respond to conventional treatment modalities when patients do not use cannabinoids.

This study has several limitations. First, significant potential selection bias exists. UDT and substance risk assessment have been performed sporadically, with no clear consensus or guideline in medical oncologic or supportive care clinics. Among our data, only 42% of patients underwent UDT during the study period. No patients were allowed to refuse UDT if a physician ordered it. However, we were unable to specify the reason that patients were chosen or not chosen for UDT on the day of their visit. Because of this selection bias, our results should be interpreted with caution. Second, in patients’ medical records, we were unable to distinguish between recreational and medicinal intent of cannabinoid use; determine delivery method or route; determine cannabinoid quality, dose, or frequency; or ascertain the last time of cannabinoid use. Without knowing these specific data, our cross-sectional ESAS scores could be mixed or contaminated, depending on the purpose or means of cannabinoid use. Lastly, although the ESAS has been shown to be a reliable tool to assess symptom burden in patients with cancer, it remains unclear whether this validation is also consistent in active cannabinoid users.

Patients with cancer receiving outpatient supportive care who had positive UDT results for THC had higher symptom severity scores for pain, nausea, appetite, and insomnia compared with their THC-negative counterparts. These results highlight potential opportunities to improve palliative care. Despite these findings, there are gaps in understanding of the symptoms that patients perceive as most likely to benefit from cannabinoid use and the actual impact of cannabinoid products on the symptom burden reported by patients, including the outpatient oncology supportive care population. With increasing state legalization of medical marijuana and ongoing unauthorized use likely to increase, it is important for researchers to address these critical gaps in the evidence base regarding marijuana use in patients with cancer. At a minimum, clinicians should consider collecting clinically relevant data on actual marijuana use in their patients, with the ultimate goal of optimizing safe prescribing and patient comfort. Further prospective research is necessary to achieve a better understanding of our findings.

Flow diagram of the study population. 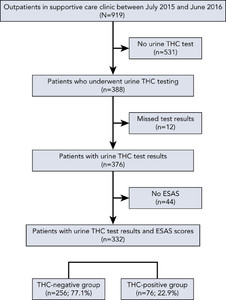