Initial treatment of prostate cancer is driven by clinical risk factors, including T stage, Gleason score, and prostate-specific antigen (PSA) level, in addition to assessment of regional nodal or distant spread.1 In men with unfavorable localized disease and sufficient life expectancy to warrant definitive treatment, several randomized trials have established radical prostatectomy or radiation therapy, with or without hormonal therapy, to be a standard of care.2–6 For metastatic disease, systemic therapy alone is recommended, with palliative radiation given in some cases.1 For patients with a very high PSA level (≥98.0 ng/mL) but no clinical evidence of lymph node or distant involvement, clinicians may be uncertain of the optimal treatment framework. Technically, these patients have localized high-risk prostate cancer for which curative locoregional treatment is typically indicated, but the presence of a very high PSA level may raise concern for occult metastatic disease, which would not be considered curable with locoregional treatment.

We used data from a large national database of patients with prostate cancer to determine patterns of care among patients with N0M0 disease and a very high PSA level, specifically focused on receipt of locoregional treatment, compared with others with N0M0 disease, node-positive disease, or metastatic disease. We also studied survival outcomes among these various subgroups of patients and explored the possible survival benefit associated with locoregional treatment.

The National Cancer Database (NCDB) captures approximately 70% of newly diagnosed cancer cases in the United States.7 We used the NCDB to identify 748,625 patients with prostate cancer diagnosed from 2004 through 2012. Patients were included if they were diagnosed with prostate adenocarcinoma and had complete data available regarding the staging of regional nodal or distant metastatic disease and PSA level. Patients were excluded if they were listed as having Nx or Mx disease; because of limitations in the NCDB, data were unavailable on exactly how patients were staged (eg, CT, bone scan). This project was approved by the Dana-Farber Cancer Institute Institutional Review Board.

Median age and follow-up were compared using the Kruskal-Wallis test; other baseline patient characteristics were compared using the chi-square test. We determined the rate of definitive locoregional treatment (pelvic or prostate radiation or radical prostatectomy) or androgen deprivation therapy (ADT) in each group. Rates of locoregional treatment or ADT were compared using multivariable logistic regression, adjusting for patient race, income quartile, education quartile, age, Charlson/Deyo comorbidity score (0 vs 1 vs ≥2), insurance status, residence type (urban vs rural), year of diagnosis, T stage, and receipt of ADT. Income and education quartiles were defined by matching a patient’s US ZIP code to data from the 2000 US Census. Patient income quartiles corresponded to the following yearly incomes: (1) <$30,000, (2) $30,000 to $34,999, (3) $35,000 to $45,999, and (4) >$46,000. Education quartiles corresponded to the percentage of adults aged >25 years without a high school diploma: (1) ≥29.0%, (2) 20.0% to 28.9%, (3) 14.0% to 19.9%, and (4) <14.0%. Because of limitations in the NCDB related to differential coding of tumor grade among patients treated with versus without radical prostatectomy, we did not adjust for Gleason score.

Overall survival (OS) at 5 years in each group was determined using the Kaplan-Meier method. Survival was compared between groups using multivariable Cox regression modeling after adjusting for the same factors listed in the previous paragraph. The effect of locoregional treatment on OS was tested similarly using Cox multivariable regression modeling within each group, and the differential effect of locoregional treatment between patients with very-high-PSA N0M0 disease and those with N1M0 disease was tested by generating an interaction term between receipt of locoregional treatment and whether patients had very-high-PSA N0M0 disease versus N1M0 disease. All reported P values were 2-sided and deemed significant at α=0.05.

Patient baseline characteristics are shown in Table 1. A total of 3,142 patients had N0M0 disease with a PSA level ≥98.0 ng/mL. Median follow-up among all patients was 3.9 years. Patients with PSA ≥98.0 ng/mL, N0M0 disease tended to be older, and have a higher T stage at diagnosis compared with those with PSA <98.0 ng/mL N0M0 disease (P<.001 in all cases). Patients with node-positive (N1) or distant metastatic (M1) disease also tended to have higher T stages at diagnosis compared with those with clinically localized disease with PSA <98.0 ng/mL. 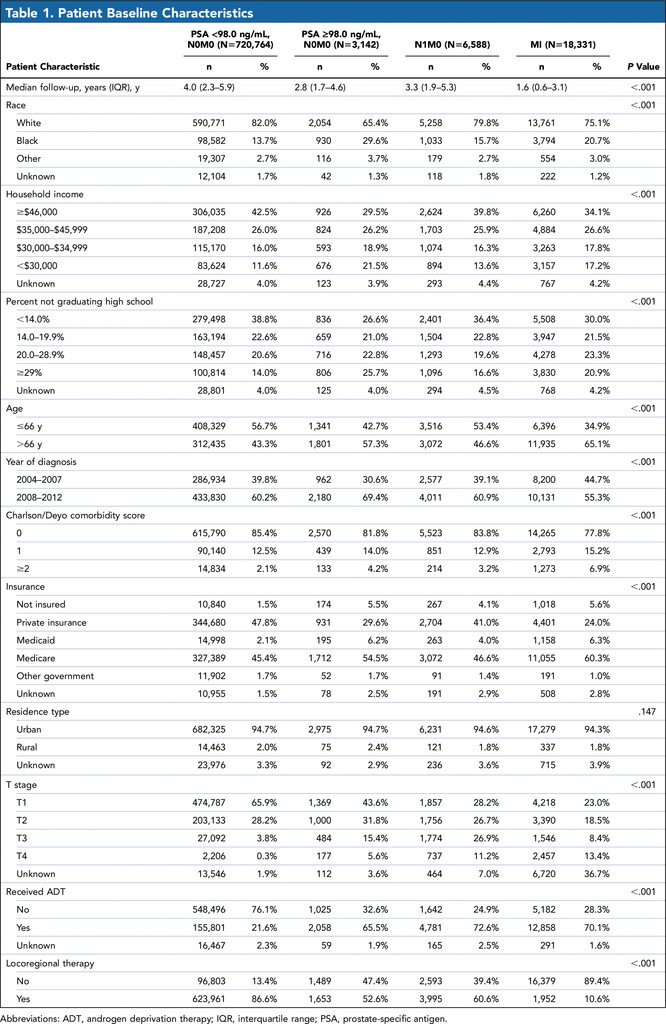 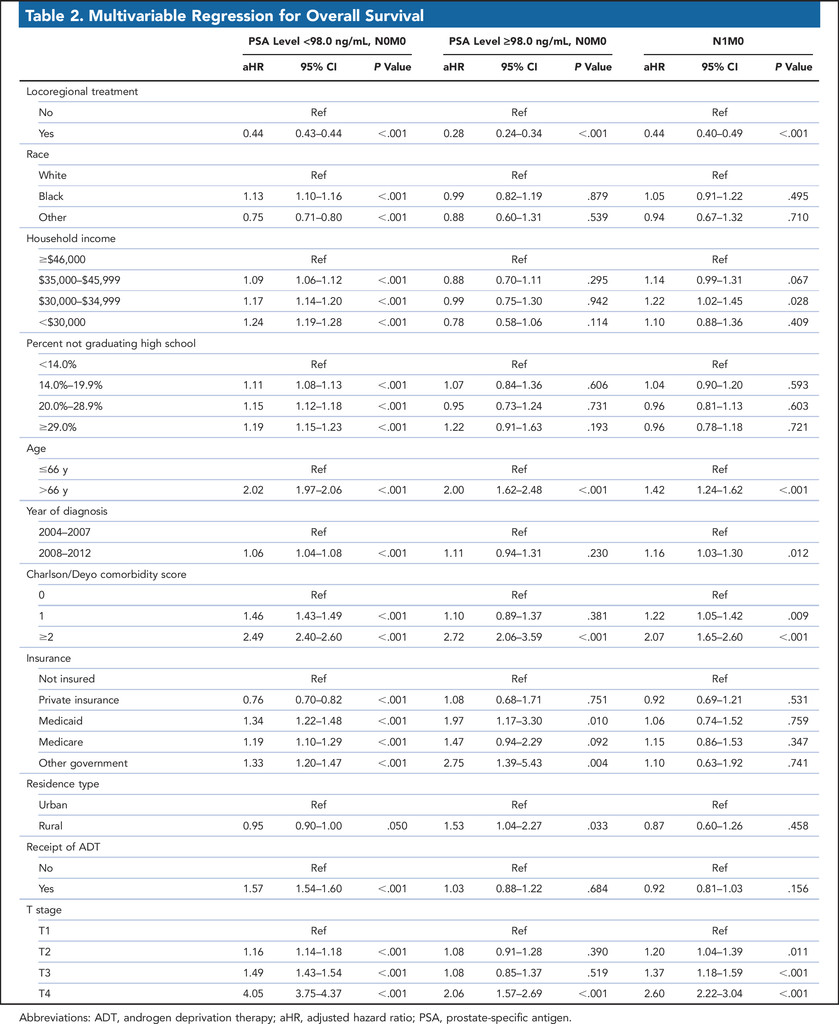 Results of the multivariable Cox regression suggest that patients had increased risk of mortality if they were black, were from counties with a lower household income or education level, were older, had a higher Charlson/Deyo comorbidity score, or had Medicaid/Medicare/other government insurance (Table 2).

Using a large national cohort of patients, this study determined that those with clinically N0M0 disease and a very high PSA level (≥98.0 ng/mL) had outcomes similar to those of patients with N1 disease but received definitive locoregional treatment at a lower rate than did patients with lower PSA levels or even those with N1 disease. Receipt of locoregional treatment (prostate/pelvic radiation or radical prostatectomy) was associated with a larger reduction in mortality among those with a very high PSA level and N0M0 disease than among those with lower PSA levels or node-positive disease, even after adjusting for multiple patient-specific factors, including comorbidity score.

Management of patients with very-high-PSA N0M0 disease is challenging. Imaging may suggest that there is no disease spread beyond the prostate, but the very high PSA level may raise concern about presence of occult metastatic disease. Determining whether a patient is likely to have occult regional nodal or distant metastatic disease is likely to significantly impact treatment decision-making. Multiple randomized trials have shown benefit with locoregional treatment of localized prostate cancer,3,5,6 whereas for clinically node-positive disease, data supporting a benefit with locoregional treatment are primarily retrospective in nature.8–13 In contrast, for distant metastatic disease, systemic therapy alone is recommended.1 These treatment paradigms are reflected in our data, showing high rates (80%–90%) of locoregional treatment for patients with PSA <98.0 ng/mL N0M0 disease, an intermediate rate (60%) for those with clinical N1M0 disease, and a low rate (10%) for those with M1 disease.

Taken together, our data suggest that despite a relatively low rate of locoregional treatment, patients with very-high-PSA N0M0 disease likely have a much better prognosis than those with M1 disease, and a similar or better prognosis than those with N1M0 disease, and should therefore be considered more frequently for definitive locoregional treatment. These data also suggest that patients with a very high PSA level and N0M0 disease by standard imaging modalities (CT and bone scan) may be candidates for pretreatment advanced imaging, such as with PET using tracers (eg, 18F-sodium fluoride, 18F-choline, 68Ga-prostate-specific membrane antigen, and 18F-fluciclovine).14 These advanced imaging modalities, which have been well studied in the posttreatment failure setting,15,16 may more clearly delineate which patients have metastatic versus nonmetastatic disease at diagnosis, allowing physicians to more confidently identify candidates for definitive treatment.

Our results are consistent with the work of others17–21 showing that, although a very high PSA level portends a poorer prognosis compared with other N0M0 prostate cancer, these presentations may still frequently be curable. Clinical trials establishing the curative role of locoregional treatment and adjuvant hormonal therapy have included men with PSA levels of 50 to 160 ng/mL,5,22,23 although these studies were not designed to determine whether the subpopulation of men with a very high PSA level could benefit from locoregional treatment. A pooled analysis of 2 RTOG trials suggested that patients with a PSA level ≥50 ng/mL have a higher adjusted rate of biochemical failure, distant metastasis, and mortality compared with other high-risk patients, but the effect size was modest, with similar unadjusted rates of 7-year OS compared with those with a PSA level <50 ng/mL (64.3% vs 68.0%); there was no comparison with a cohort of node-positive patients.17 A Canadian registry study showed that among 207 patients with a PSA level ≥100 ng/mL, radiation therapy was associated with improved 5-year OS compared with ADT alone (68% vs 40%).18 Several institutional studies have similarly shown good long-term outcomes for patients with very high PSA levels, albeit inferior to outcomes for patients with lower PSA levels.19–21 Our study may be the largest to examine treatment patterns or outcomes in patients with very-high-PSA N0M0 disease, allowing us to also adjust for multiple known sociodemographic predictors of treatment receipt and long-term outcomes.10,11,24–28

This study must be interpreted with caution in light of several important limitations. First, the data are retrospective, and therefore the results are susceptible to selection bias and confounding. Although we attempted to account for this limitation via use of multivariable analysis, there may be other unmeasured confounders that can explain the practice patterns and survival differences observed. For example, patients with a high PSA at diagnosis may have neglected symptoms or delayed biopsy due to competing medical problems or aversion to definitive therapy for other reasons that were not captured in the database and could not be accounted for in these analyses. These men may also have been more likely to decline definitive therapy. Similarly, our analysis suggesting an association between receipt of locoregional treatment and improved survival could be confounded by important covariates, such as patient performance status or other measures of overall prognosis that are incompletely captured in the Charlson/Deyo comorbidity score.

Second, the NCDB does not contain detailed information regarding how patients were staged. Although patients listed as having Nx or Mx disease were excluded, we did not have information regarding how the regional nodes and distant metastatic sites were evaluated. Based on practice patterns and national guidelines,1,29,30 most men with high-risk disease (including those with very high PSA levels) were likely to have had a CT of the abdomen and pelvis and a bone scan. However, it remains possible that some men were miscategorized as having a very high PSA level and N0M0 disease based on incomplete imaging evaluation and incorrect coding of their nodal or distant staging as N0 or M0 rather than Nx or Mx, which would have biased these results.

Third, because of limitations in the NCDB, we did not have exact PSA values for levels >98.0 ng/mL, and therefore these patients had to be grouped for analysis. The population of patients with very-high-PSA N0M0 disease is likely a heterogeneous group. Therefore, caution must be taken when applying these data, especially for PSA levels much higher than this 98.0 ng/mL threshold. Future work is needed to validate these data, including prospective studies evaluating the role of locoregional treatment in very-high-PSA N0M0 prostate cancer. 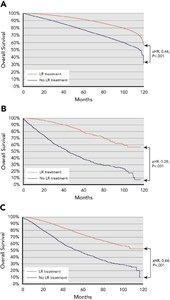