Background: This study evaluated the effectiveness of a screening and stepped care program (the TES program) in reducing psychological distress compared with care as usual (CAU) in patients with metastatic colorectal cancer starting with first-line systemic palliative treatment. Patients and Methods: In this cluster randomized trial, 16 hospitals were assigned to the TES program or CAU. Patients in the TES arm were screened for psychological distress with the Hospital Anxiety and Depression Scale and the Distress Thermometer/Problem List (at baseline and 10 and 18 weeks). Stepped care was offered to patients with distress or expressed needs, and it consisted of watchful waiting, guided self-help, face-to-face problem-solving therapy, or referral to specialized mental healthcare. The primary outcome was change in psychological distress over time, and secondary outcomes were quality of life, satisfaction with care, and recognition and referral of distressed patients by clinicians. Linear mixed models and effect sizes were used to evaluate differences. Results: A total of 349 patients were randomized; 184 received the TES program and 165 received CAU. In the TES arm, 60.3% of the patients screened positive for psychological distress, 26.1% of which entered the stepped care program (14.7% used only watchful waiting and 11.4% used at least one of the other treatment steps). The observed low use of the TES program led us to pursue a futility analysis, which showed a small conditional power and therefore resulted in halted recruitment for this study. No difference was seen in change in psychological distress over time between the 2 groups (effect size, −0.16; 95% CI, −0.35 to 0.03; P>.05). The TES group reported higher satisfaction with the received treatment and better cognitive quality of life (all P<.05). Conclusions: As a result of the low use of stepped care, a combined screening and treatment program targeting psychological distress in patients with metastatic colorectal cancer did not improve psychological distress. Our results suggest that enhanced evaluation of psychosocial concerns may improve aspects of patient well-being. 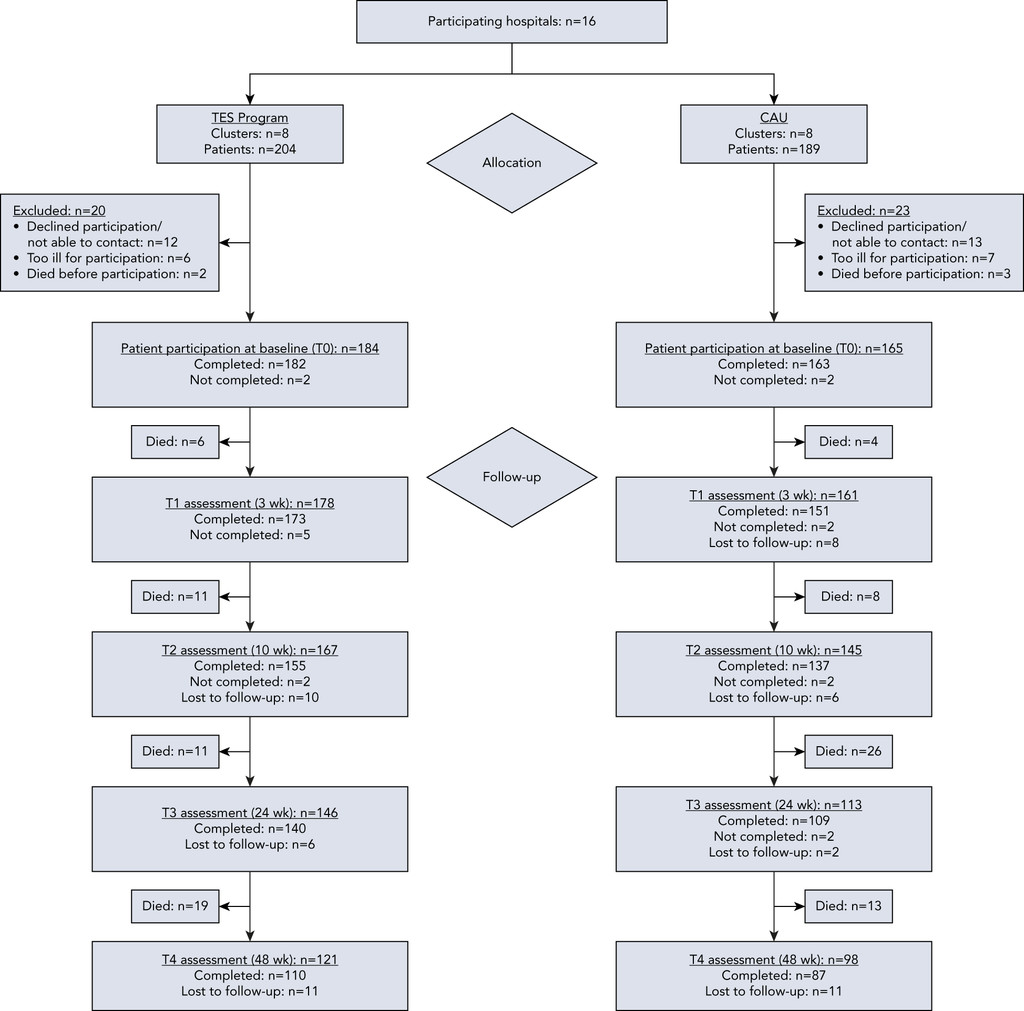 CONSORT diagram: study flowchart. Patients who did not complete an assessment were kept in the analysis and handled as missing observations. 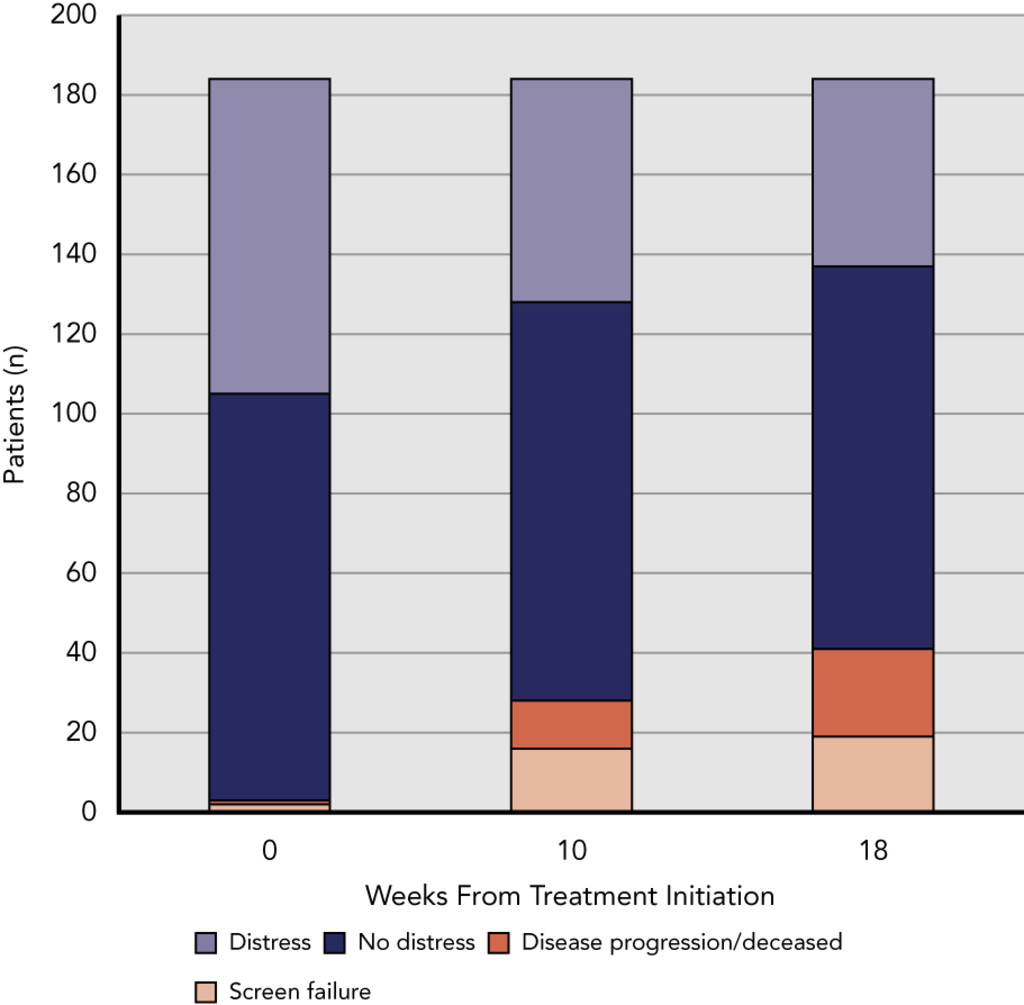 Distress screening with Hospital Anxiety and Depression Scale and the Distress Thermometer/Problem List in the TES arm. 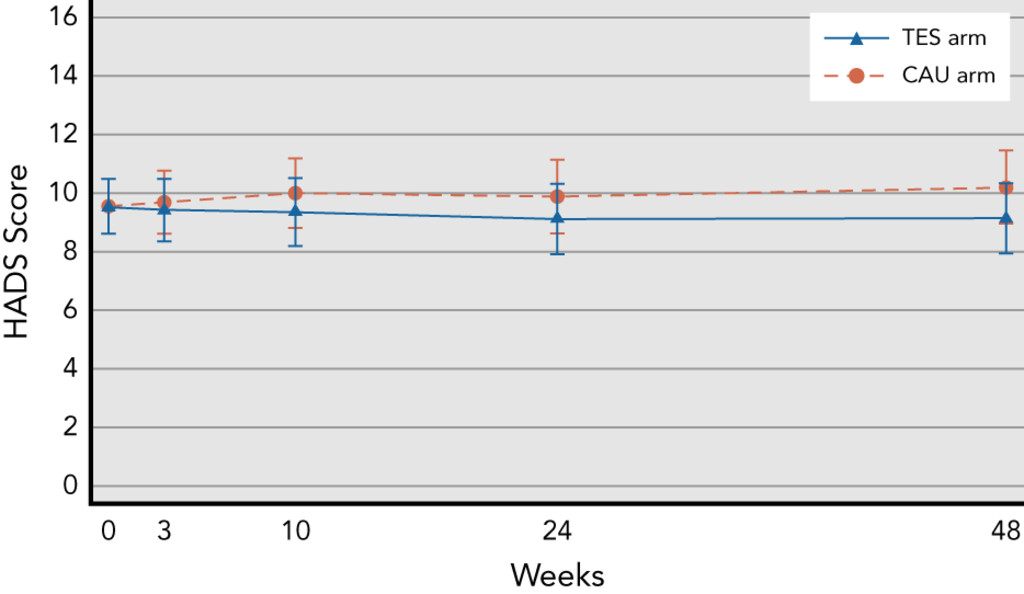 Predicted means of HADS score (with error bands) in the TES group (intervention) versus CAU arm (control) at the different time points in weeks from a linear mixed models analysis using a discrete time model. 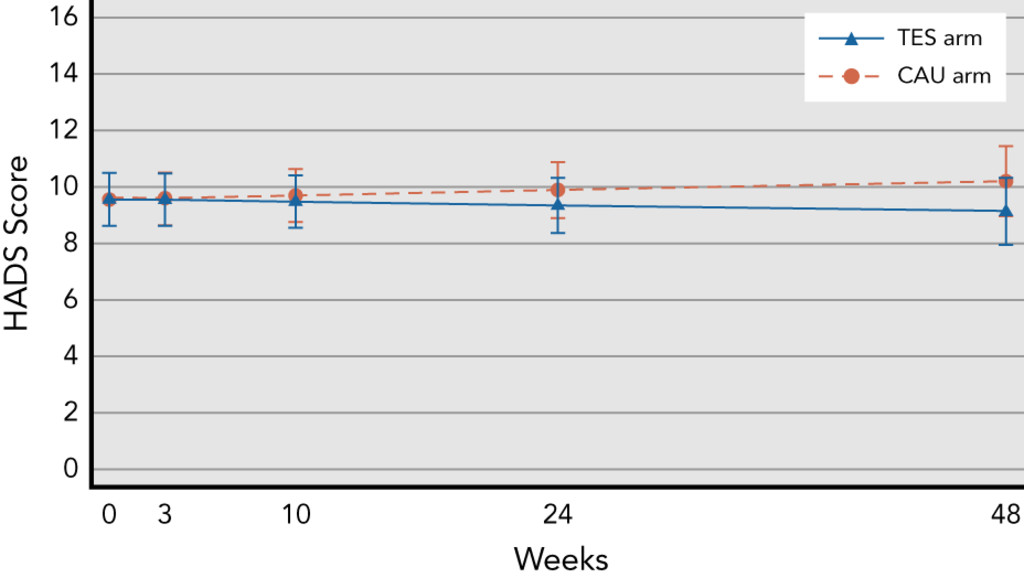 Predicted means of HADS score (with error bands) in the TES group (intervention) versus CAU arm (control) over time in weeks from a linear mixed models analysis using a linear time model. 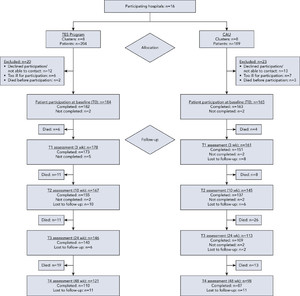 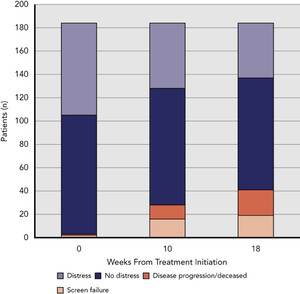 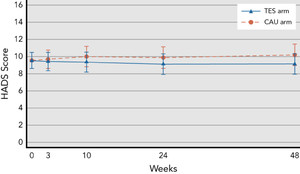 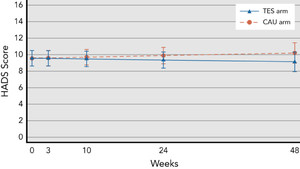