Background: Nonprofit organizations (NPOs) in oncology are vital for patient advocacy and funding research for rare cancers, young investigators, and innovative projects. However, some cancers may be underfunded relative to their burden. This study examined the alignment of cancer burden by histology with NPO funding for each histology. Patients and Methods: This nationwide, cross-sectional study conducted from October 2017 through February 2018 included all oncology NPOs with >$5 million in annual revenue. Total revenue from NPOs supporting individual cancer types with the incidence, mortality, and person-years of life lost (PYLL) for each cancer type was compared using scatter plots and Pearson correlation coefficients. Correlation of expenditure types (eg, fundraising, patient education) with revenue was assessed using Pearson correlation coefficients. Effect of disease association with a stigmatized behavior (eg, lung cancer and smoking) was evaluated using descriptive statistics. Results: A total of 119 cancer-related NPOs were included, generating approximately $6 billion in annual revenue in 2015. Cancers with the largest revenue were breast cancer ($460 million; 33.2%), leukemia ($201 million; 14.5%), pediatric cancers ($177 million; 12.8%), and lymphoma ($145 million; 10.5%). Breast cancer, leukemia, lymphoma, and pediatric cancers were all well funded compared with their incidence, mortality, and PYLL. Gastrointestinal (colorectal, pancreas, and hepatobiliary), gynecologic (ovarian, cervical, and endometrial), brain, and lung cancers were poorly funded in all 3 metrics. All cancers associated with a stigmatized behavior were poorly funded in at least 2 metrics. Increased spending on fundraising, administrative costs, patient education, and treatment was highly correlated with increased revenue (Pearson correlation coefficients all >0.92). Conclusions: NPO funding by cancer type is not proportionate with individual cancer burden on society. Disease stigma negatively impacts funding. A significant need exists to increase awareness and funding for many undersupported but common and highly lethal cancers.

Patient advocacy organizations (PAOs) are nonprofit organizations (NPOs) that work to combat a particular disease or group of diseases or support a certain patient population. These organizations and other cancer-related NPOs can be influential through political advocacy to shape health policy, fund medical research, accelerate regulatory approval of novel therapies, and expand insurance coverage for specialized diagnostics, drugs, or devices.1–3 According to the most recent Giving USA report, health-related NPOs received $40.8 billion in contributions in 2018.4

NPOs in oncology are vital for advocacy, research, and supporting young investigators. They advocate to political leaders and legislatures regionally and nationally,1 raise funds for cancer research in the basic and applied sciences and for clinical research, and make concerted efforts to support young, early-career investigators, such as the Stand Up To Cancer Innovative Research Grants program.

Although there has been much investigation into potential financial conflicts of interest from NPOs and PAOs accepting contributions from for-profit corporations,2,3,5,6 little is known about the distribution of funding for NPOs classified by the cancer type they support compared with the burden of each cancer type on society. It is possible that funding of NPOs increases proportionally with the incidence and number of deaths caused by the type of cancer those organizations support. It is also likely that other factors, such as public awareness, advertising, disease stigma, or political influences, can skew funding toward certain malignancies.

Some data show that individual donors are largely unaware of which medical causes are well supported and which are underfunded, but if informed of these disparities, the public can attempt to compensate for them.7 A study in the United Kingdom that surveyed 401 members of the general population found that respondents grossly overestimated British government funding for cancer research compared with other medical research funding. After respondents were made aware of this or when asked about hypothetical cuts in governmental cancer research funding, they stated that they would increase donations to cancer research by 18% to compensate.8

Our study compared the distribution of NPO funding across cancer types versus their respective burdens on society and explored factors that may influence which cancers receive more public support.

We used a purposive method to identify the largest cancer-related NPOs in terms of annual revenue. The sample was constructed using 2 unique methods, both using the GuideStar database of 501(c)(3) organizations. Only organizations with ≥$5 million of annual revenue were included to focus the sample on organizations large enough to have a national impact on the broader oncology community.

First, organizations with the health-related National Taxonomy of Exempt Entities codes G (“Diseases, Disorders, Medical Disciplines”) and H (“Medical Research”) were selected based on the 2017 coding system. Second, the GuideStar database was queried with each of 168 predetermined search terms of cancer-related words or phrases (eg, “breast cancer” or “colon cancer”). The list of search terms is shown in supplemental eTable 1 (available with this article at JNCCN.org). We excluded non–cancer-related organizations and organizations that primarily deliver medical care (eg, acute care hospitals, outpatient clinics) based on a review of each organization’s annual report, website, or mission statement. Charitable or foundation branches of acute care hospitals or cancer centers were included if their primary function is as a charity or PAO.

From October 2017 through February 2018, we collected and analyzed the Form 990 tax records, annual reports, and websites of each organization included in the study. Annual reports were obtained from each organization’s website when available, and Form 990 reports were obtained from the organization’s website or the GuideStar database, whichever was most recent. Data from July 2015 through December 2016 were included because these were the most current at the time of analysis. Annual revenue was collected from Part I, line 12 of the Form 990 tax records, and expenditures were collected from the annual report or Form 990. Expenditures were classified into 1 of 9 categories: patient support (eg, support groups, paying for transportation), patient education, research, prevention, treatment (eg, copay assistance for medications), professional education (eg, professional society conferences), policy advocacy (lobbying), administrative costs, and fundraising.

To assess disease burden on society by cancer type, we collected data on annual incidence, mortality, and person-years of life lost (PYLL) for each cancer type in 2017 (the year of study analysis) from the SEER database.9 The pediatric cancer category was defined as cancers occurring in patients aged 0 to 18 years (most commonly leukemias and brain tumors). PYLL is the difference between the actual age of death from a disease and the expected age of death for an individual (eg, a person who dies of cancer at age 35 years has more PYLL than someone who dies of cancer at age 75 years).10

We also assessed the effect of cancer association with a high-risk behavior or stigma on NPO funding. Stigma was defined as the association between a personal choice to participate in a cancer-causing behavior and a particular cancer. An association was considered strong enough for study inclusion if the hazard ratio between that behavior and an individual cancer was ≥2.0 based on review of the epidemiologic literature.11–15 Included stigmatized behaviors were smoking, alcohol, intravenous drug use, sex, and tanning beds. We then compared the amount of revenue allocated to stigmatized cancers versus nonstigmatized cancers using descriptive statistics.

Cancer-related NPOs generated $5.98 billion in annual revenue in 2015 through 2016. Most of the revenue, $4.59 billion (76.8%), was generated by the 59 (50%) organizations that support cancer in general with no focus on one disease (eg, American Cancer Society [ACS]). Table 1 shows the complete breakdown of number of NPOs and amount of annual revenue supporting each cancer type.

The 2017 SEER database statistics for annual incidence, mortality, and PYLL for each cancer type that were used in this analysis are shown in supplemental eTable 2.

Correlation Between Area of Expenditure and Annual Revenue 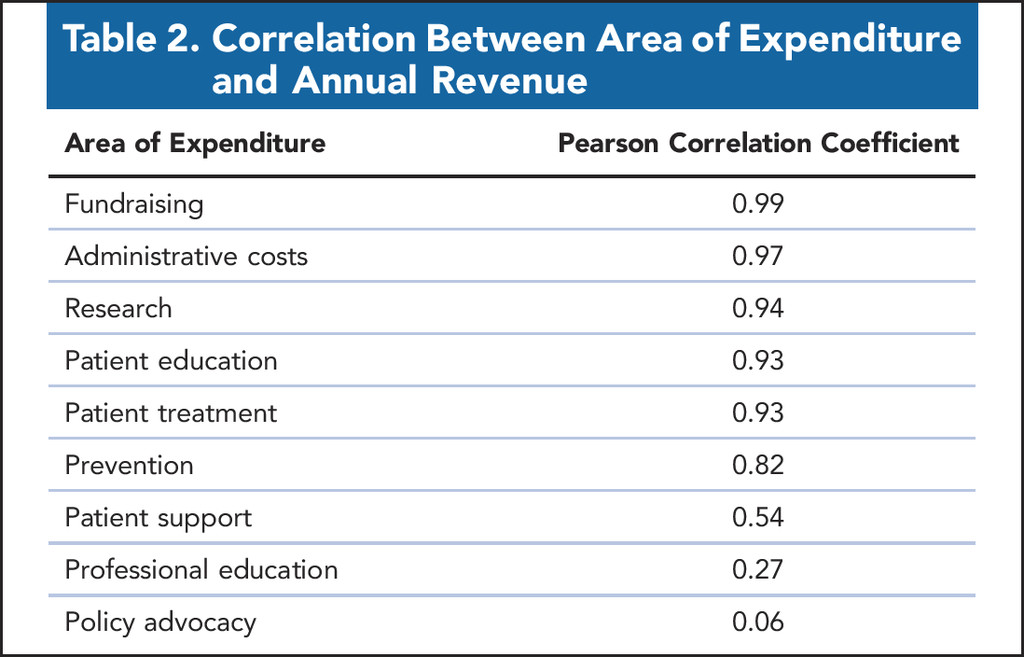 Evaluation of the literature for cancers strongly associated with high-risk, stigmatized behaviors identified 7 malignancies: lung (smoking), head and neck (smoking, alcohol), bladder (smoking), esophageal (smoking, alcohol), liver (alcohol, intravenous drug use), cervical (sex), and nonmelanoma skin cancers (tanning beds).11–15 All 7 were poorly funded in at least one epidemiologic metric, and all but skin cancer were poorly funded in all 3 metrics (incidence, mortality, and PYLL). Conversely, 14 malignancies had no strong association with a stigmatized behavior: leukemia, lymphoma, multiple myeloma, sarcoma, melanoma, and breast, pediatric, neuroendocrine, colorectal, pancreas, prostate, ovarian, endometrial, and brain cancers.8 The 4 cancer types that were well funded across all 3 metrics (breast cancer, leukemia, lymphoma, and pediatric cancers) all fell into this category. Neuroendocrine cancers were well funded compared with their incidence and were not evaluated for mortality or PYLL because these data are not known.

It is clear that with nearly $6 billion in annual revenue, cancer-related NPOs have an important role in funding medical research, supporting and educating patients and their families, and influencing health policy. This figure also demonstrates how deeply invested society is in cancer research and advocacy. However, our data show that this investment is not equitable across all cancer types and that the disease burden by cancer type does not correlate with the amount of NPO funding for a particular cancer. There is a weak association between increased incidence of a particular cancer type and funding for NPOs supporting that cancer, but essentially no correlation between mortality or PYLL and NPO funding. Many common or highly lethal diseases, including lung, colorectal, pancreatic, ovarian, and endometrial cancers, are underfunded relative to their burdens on society. Underfunding may have negative downstream effects on research, novel drug development, and number of FDA drug approvals for poorly funded cancers.

Individual donors are motivated by several factors when they choose which causes to support. Association with high-risk behaviors, such as smoking or alcohol abuse, seems to be an important factor leading to decreased funding for stigmatized cancers. However, many common or deadly cancers with no association with a stigmatized behavior were still poorly funded according to our findings, indicating that there are other relevant factors. Many donors choose a cause they are affected by, either personally or through family or friends.1,8 Marketing and social media campaigns, such as the pink ribbon representing breast cancer awareness, can increase overall public awareness of a disease and thereby increase donations.16 Diseases that are common but with indolent courses or relatively low mortality rates also have more survivors who can later become advocates for the cause and attract more donors.

The greatest limitation of this study is that most charitable dollars, nearly $4.6 billion, go to NPOs that support all cancers, and it is unknown which diseases receive this money and in what proportion. These organizations may increase support for poorly funded causes (“crowding out”), build on already well-funded causes (“crowding in”), or act independently.8 This analysis also does not account for the NCI’s funding distribution across cancer subtypes, which represents a large source of research dollars. However, a 2012 study that examined NCI funding distribution compared with cancer burden showed that breast, prostate, and brain cancers and leukemia were well funded, whereas colorectal, pancreatic, liver and bile duct, endometrial, and bladder cancers were poorly funded.17 Based on these data, it is unlikely that NCI funding would offset the NPO funding pattern illustrated in our study. Additional data from the National Cancer Research Institute in the United Kingdom showed a pattern of disproportionate funding across cancer subtypes compared with their societal burden similar to what our study showed for US NPOs.18,19

The goal of our study was not to divert funding away from any disease but rather to educate the public and augment charitable funding for diseases that do not receive proportionate support. Well-funded NPOs should be applauded for their successes and could collaborate with other organizations to improve funding. No one entity can fully support research and patient advocacy. Multiple different groups from government, industry, academic institutions, and philanthropic organizations are necessary. These data could help inform the funding allocations of large, general cancer NPOs and governmental entities such as ACS or the NCI and inform individual donors and grant-makers.

We hope these findings stimulate further discussion and research to explore the granular aspects of NPO funding, enabling stakeholders to make evidence-based decisions for optimal allocation.

Scatter plots using logarithmic scales for annual revenue by cancer type versus annual (A) incidence, (B) mortality, and (C) PYLL. Logarithmic trendlines and R2 values are displayed in each panel.