Chemotherapy With or Without Anti-EGFR Agents in Left- and Right-Sided Metastatic Colorectal Cancer: An Updated Meta-Analysis

Background: Previous meta-analyses have suggested primary tumor location as a predictive factor for efficacy of anti–epidermal growth factor receptor (EGFR) therapies in patients with metastatic colorectal cancer (mCRC). However, the recent phase III TAILOR trial addressing this issue was not included in those analyses. This meta-analysis incorporated data from the TAILOR trial to evaluate the efficacy of chemotherapy plus anti-EGFR agents (cetuximab [Cet] or panitumumab [Pani]) versus chemotherapy alone for RAS wild-type (wt) right- and left-sided mCRC. Patients and Methods: A PubMed-based literature search was conducted to identify randomized controlled trials (RCTs) studying the additional efficacy of Cet/Pani in combination with chemotherapy versus chemotherapy alone in RAS wt left- and right-sided mCRC. Study-level pooled analyses of hazard ratios (HRs) for overall survival (OS) and progression-free survival (PFS) and odds ratios (ORs) for objective response rate (ORR) were performed. Results: Three first-line RCTs (CRYSTAL, PRIME, and TAILOR) and one second-line RCT (20050181) were included. Significant OS benefits from Cet/Pani were observed in the left-sided (HR, 0.76; 95% CI, 0.66–0.86) but not right-sided subgroups (HR, 0.99; 95% CI, 0.78–1.27). However, the addition of Cet/Pani to chemotherapy significantly improved PFS and ORR in both the left-sided (HR, 0.70; 95% CI, 0.57–0.86, and OR, 3.28; 95% CI, 1.95–5.51, respectively) and right-sided subgroups (HR, 0.76; 95% CI, 0.59–0.99, and OR, 1.78; 95% CI, 1.08–2.93, respectively). Conclusions: The addition of Cet/Pani to chemotherapy significantly benefits PFS and ORR in patients with RAS wt right-sided mCRC, indicating that anti-EGFR therapies may remain an option for selected patients.

Colorectal cancer (CRC) is the third most common malignant disease affecting both men and women in the Asia-Pacific region.1 Several studies have reported heterogeneity in developmental, microbial, gut floral, molecular, genetic, and clinical outcomes of left- and right-sided CRC tumors.2–7 These differing characteristics are associated with differential prognosis, and patients with right-sided CRC are reported to have a worse prognosis.8,9

A recent meta-analysis including 14 prospective studies in metastatic CRC (mCRC) reported a 56% increase in mortality in right-sided compared with left-sided tumors,10 indicating the prognostic relevance of primary tumor location (PTL). In addition, several post hoc analyses of randomized controlled trials (RCTs) and retrospective studies have suggested PTL to be a predictive factor for treatment benefits, especially in patients treated with targeted therapies.11–16 A recent pooled analysis of 6 first- or second-line RCTs evaluating the efficacy of chemotherapy + cetuximab (Cet) or panitumumab (Pani) versus chemotherapy ± bevacizumab (Bev) reported significant improvement in overall survival (OS), progression-free survival (PFS), and objective response rate (ORR) with chemotherapy + Cet/Pani in patients with RAS wild-type (wt) left-sided tumors, but no significant survival benefits in those with RAS wt right-sided tumors.17 In addition, subgroup analysis with Bev in the control arm showed significantly worse PFS and numerically worse OS with chemotherapy + Cet/Pani in patients with RAS wt right-sided mCRC.17 Because of these findings, Bev is increasingly being considered the preferred targeted agent in patients with right-sided tumors.18

This meta-analysis was reported in accordance with PRISMA guidelines.20

A PubMed-based literature search through the end of December 2017 was performed using the following search or MeSH terms: metastatic colorectal cancer, primary tumor location, sidedness, left-sided tumor, and right-sided tumor. In addition, we conducted searches of the major oncology congress websites, including ASCO and ESMO. After screening titles and abstracts, potentially relevant studies were retrieved and assessed for eligibility criteria. Reference lists of the included publications were manually checked to identify additional potential studies.

Studies that met the following criteria were eligible for the quantitative analysis: (1) RCTs that reported RAS wt (KRAS/NRAS exon 2–4 wt) mCRC; (2) studies that enrolled patients treated with either chemotherapy + anti-EGFR agents (Cet/Pani) or chemotherapy alone; and (3) studies that reported treatment outcomes (OS, PFS, and ORR) as HRs and odds ratios (ORs), with stratification for PTL (left vs right). The most recent and complete publications were included when duplicate data or subgroup analysis of the same study was found.

Relevant data were extracted by 2 independent investigators (Z.X. Wang, H.X. Wu) and verified by a third investigator (M.M. He). Any discrepancies among investigators were resolved through consensus.

HRs and ORs with 95% CIs in the literature were synthesized to obtain overall treatment effects based on PTL (left vs right). Potential heterogeneity among the studies was determined using Cochran’s Q statistic and I2 statistic. In the presence of significant heterogeneity (P<.10 or I2>50%), random-effects meta-analytic models were used to calculate the pooled HRs and ORs. Otherwise, the analysis was performed using the fixed-effects models. Multivariate random-effects meta-regression models were used to evaluate the interaction effect between PTL and treatment with Cet/Pani after adjustment for the anti-EGFR agent, chemotherapy backbone, and treatment line. All P values were 2-sided. Statistical analyses were performed using R 3.4.1 (The R Foundation) with the package “metaphor.”

The search yielded a total of 1,252 potentially relevant studies, of which 4 RCTs ultimately fulfilled the study criteria (CRYSTAL,8,21 PRIME,11,22 TAILOR,19 and 2005018123,24; ClinicalTrials.gov identifiers: NCT00154102, NCT00364013, NCT01228734, and NCT00339183, respectively) (Figure 1). Baseline characteristics of the included trials are summarized in Table 1. A total of 1,539 patients were included, of which 325 were diagnosed with right-sided RAS wt mCRC and 1,214 with left-sided mCRC (Table 1). In all 4 trials, primary tumors originating in the cecum, appendix, ascending colon, hepatic flexure, and transverse colon were classified as right-sided tumors.

Effect of PTL on OS Benefits With Anti-EGFR Agents

A significant improvement in OS was observed in patients with left-sided RAS wt tumors treated with chemotherapy + Cet/Pani compared with chemotherapy alone (HR, 0.76; 95% CI, 0.66–0.86; P<.0001; Figure 2A), without significant evidence for between-study heterogeneity (P=.150; I2=43.7%). However, addition of Cet/Pani to chemotherapy provided no OS benefits in patients with RAS wt right-sided tumors (HR, 0.99; 95% CI, 0.78–1.27; P=.945; Pheterogeneity=.860; I2=0%; Figure 2A). After adjustment for anti-EGFR agent, chemotherapy backbone, and treatment line, the treatment effect of Cet/Pani on OS differed significantly according to PTL (Pinteraction=.044; Table 2).

Effect of PTL on PFS Benefits With Anti-EGFR Agents

Because there was significant heterogeneity between the studies (Pheterogeneity=.094; I2=53.4%) in the left-sided subgroup, a random-effects model was used for the PFS analysis. The pooled HRs of 0.70 (95% CI, 0.57–0.86; P=.001) showed that patients with left-sided RAS wt mCRC treated with chemotherapy + Cet/Pani had a significantly higher PFS compared with those treated with chemotherapy alone (Figure 2B). Unlike OS, a significant improvement in PFS with Cet/Pani was detected in patients with RAS wt right-sided tumors (HR, 0.76; 95% CI, 0.59–0.99; P=.040; Figure 2B), absent between-study heterogeneity (Pheterogeneity=.926; I2=0%). Multivariate meta-regression analysis revealed no significant interaction between PTL and the efficacy of Cet/Pani on PFS (Pinteraction=.591; Table 2).

Effect of PTL on ORR Benefits With Anti-EGFR Agents

Previous studies have reported differences in the efficacy of anti-EGFR agents in RAS wt mCRC according to PTL.4,8 Notably, 2 meta-analyses including the CALGB 80405, FIRE-3, and PEAK studies showed significantly better OS, PFS, and ORR with first-line chemotherapy plus anti-EGFR antibodies than with chemotherapy + Bev in patients with RAS wt left-sided mCRC.10,17 In contrast, patients with RAS wt right-sided tumors appeared to gain more benefits from chemotherapy + Bev.10,17 These data led the NCCN Clinical Practice Guidelines in Oncology (NCCN Guidelines) for Colon Cancer to recently recommend against use of anti-EGFR agents in the frontline treatment of RAS wt right-sided mCRC.18

Our updated meta-analysis confirmed that adding Cet/Pani to chemotherapy clearly benefited patients with RAS wt left-sided tumors in terms of OS, PFS, and ORR. In contrast, the treatment effect of Cet/Pani on OS was significantly attenuated in the RAS wt right-sided subgroup, which corroborates previous observations that have convincingly shown fewer benefits from anti-EGFR therapy in patients with right-sided tumors.4,8,25 To the best of our knowledge, our study is the first to show that the addition of Cet/Pani to chemotherapy could still significantly improve PFS and ORR in patients with right-sided RAS wt mCRC. In previous meta-analyses, we noticed a numerical trend toward better PFS and ORR favoring chemotherapy + Cet/Pani over chemotherapy alone, but results were not statistically significant.10,17 A possible reason for our different findings might be the additional inclusion of the TAILOR trial, which provided a greater statistical power from the increased sample size of patients with RAS wt right-sided tumors, absent between-study heterogeneity.

We acknowledge certain limitations in our analysis. First, this meta-analysis was performed at the study level rather than the individual patient level. Thus, some of the unreported information at the individual patient level, such as BRAF status, might affect our findings. The prevalence of BRAF mutation with stratification for PTL was reported in the PRIME, 20050181, and TAILOR studies and was generally balanced between treatment arms across these studies.17,19 The efficacy data of anti-EGFR therapy with stratification for both BRAF status and PTL was only available in the TAILOR study, which showed that OS and PFS were even worse with anti-EGFR therapy for RAS wt/BRAF-mutant right-sided tumors, but seemed to favor anti-EGFR therapy for RAS/BRAF wt right-sided tumors.19 This finding, which corroborates previous observations,35,36 suggests that anti-EGFR agents are highly unlikely to yield benefits in RAS wt/BRAF-mutant right-sided tumors. Therefore, for patients with right-sided tumors, it could be justified to confine anti-EGFR therapy to those with RAS/BRAF wt tumors.

Second, our meta-analysis was based on post hoc subset analysis data regarding either historically examined RAS status or retrospectively collected PTL information. Consequently, a substantial proportion of patients who had a KRAS/NRAS mutation, nonevaluable RAS status, or missing data regarding PTL were excluded from the all-randomized population. Misclassification of tumor sidedness might also have occurred during retrospective data collection. Therefore, our findings may experience potential biases and should be interpreted with caution. However, given that no available trial prospectively examines the impact of PTL on efficacy of anti-EGFR therapy in RAS wt mCRC, our meta-analysis still presents reasonably compelling evidence regarding this issue.

Third, the 4 included trials were different in study design; however, there was no heterogeneity among the studies within the right-sided subgroup for all 3 end points, suggesting the robustness of the pooled analysis data for right-sided tumors.

Forest plots showing the HRs for (A) overall survival and (B) progression-free survival and the odds ratio for (C) objective response rate comparing chemotherapy + Cet or Pani with chemotherapy only, with stratification for tumor location. Interaction test between tumor side and treatment effect were (A) P=.044, (B) P=.591, and (C) P=.134. 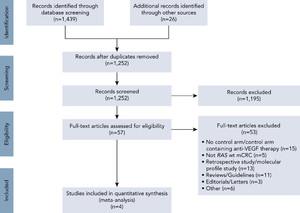 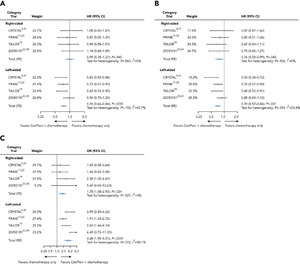