Meningiomas represent a full spectrum of tumors that are the most common type of brain tumor in adults. Although most are benign, recent research has shown that the recurrence rate is high, especially for WHO grades 2 and 3, and overall survival is poor for these grades. Treatment is evolving, and recently sunitinib and bevacizumab have shown promise compared with historical treatments. However, more research is needed to identify better treatments for meningiomas. Treatment of brain metastases is another evolving field. Studies suggest that stereotactic radiosurgery is preferable to whole-brain radiation therapy and that immune checkpoint inhibitors and therapies targeted to the T790M mutation and ALK can improve outcomes in patients with non–small cell lung cancer and brain metastases.

Clinical Practice Decisions in the Treatment of Meningiomas

Meningiomas are heterogeneous and represent a full spectrum of disease, from small to aggressive tumors. They are the most frequently reported brain tumors in adults, representing 30% of all brain tumors. They are usually benign, with the benign form more common in women and atypical/anaplastic tumors more common in men. Known risk factors include female sex, advancing age, cranial irradiation, trauma, genetics, and possibly breast cancer.

“The jury is out on whether cell phones cause meningiomas,” said Thomas Kaley, MD, Director of the Neuro-Oncology Fellowship Program, Memorial Sloan Kettering Cancer Center.

An estimated 80% of meningiomas are benign. “For the most part, if you resect them you will never hear from them again,” he commented. However, a small percentage are WHO grade 3 and very aggressive (Figure 1).1 Many meningiomas are asymptomatic or present with nonspecific features, such as seizures, headache, hydrocephalus, and nausea/vomiting. Specific symptoms include weakness in the extremities, visual changes, hearing loss, and inattention.1 Diagnosis is performed using CT and MRI. Management is typically conservative, with surgery, radiation, and chemotherapy.

“Management of more aggressive tumors can be challenging,” Dr. Kaley said. According to the NCCN Clinical Practice Guidelines in Oncology (NCCN Guidelines) for Central Nervous System (CNS) Cancers, observation is preferred for most small, asymptomatic meningiomas, but treatment is recommended for symptomatic patients.

“Surgical resection is performed on an individual basis, based on location and size. For patients with WHO grade 1 tumors who require surgery, resect and then observe. For WHO grade 2 tumors, after surgical resection the use of radiation is controversial, with passionate advocates on each side,” he said. WHO grade 3 tumors are treated with surgery and radiation.

“There is a spectrum of outcomes related to tumor heterogeneity,” Dr. Kaley continued. Some meningiomas are discovered incidentally when a patient is undergoing imaging for another reason. These are typically small meningiomas, but management is not clear. Observation is usually the plan, but no good data are available on long-term outcomes.

Dr. Kaley is lead investigator of a group called Response Assessment in Neuro-Oncology (RANO), which is involved in research to provide more definitive data about meningiomas. RANO has publications that define the natural history of meningiomas of all 3 WHO grades treated with surgery, radiation, and medical therapy. RANO also developed uniform response criteria and trial designs for future studies.2,3

“These outcomes are sobering, even for benign meningiomas that are completely resected,” Dr. Kaley emphasized. “Treatment for surgery- and radiation-refractory meningiomas represents an unmet clinical need. There are no FDA-approved therapies. The NCCN Guidelines suggest sunitinib, interferon alfa, or bevacizumab plus everolimus as category B recommendations.”

“This review was based on 43 publications on medical therapies for meningioma. The studies represent enormous heterogeneity in terms of populations, response outcomes, and study designs. The overwhelming majority are retrospective studies, and the NCCN Guidelines are extremely important here,” Dr. Kaley emphasized.2

“With radiation- and surgery-refractory meningiomas, 6-month rates of progression-free survival [PFS] are abysmally low at 25.8%; median overall survival [OS] is 7 to 13 months for WHO grade 1 tumors. WHO grade 2 and 3 tumors can be aggressive and highly malignant, with 6-month PFS of 14% and median OS from 6 to 33 months,” he stated.

Both sunitinib and bevacizumab have improved PFS compared with the historical PFS rate of 14%. A phase II trial attained a 6-month PFS of 42% with sunitinib in 40 heavily pretreated patients with refractory progressive meningioma. Median OS was 24.6 months.4 A separate multicenter study of bevacizumab in 15 pretreated patients with WHO grade 2 or 3 meningioma showed a 6-month PFS of 43.8%.5

“We are looking at mutations and various kinases that can have therapeutic implications. We haven’t really cracked that code for CNS tumors,” Dr. Kaley told the audience.

Thus far, results of studies of patients with meningiomas that harbor mutations in E17K and AKT alterations have been disappointing. “We are going back to the drawing board to try to meet the challenges of this disease—to raise awareness and interest in developing drugs. You will undoubtedly see these patients in your practice and we are just beginning to get a better understanding of the natural history of the disease,” he said.

“Brain metastases are the most common type of CNS tumor and appear to be more frequent in some tumor types,” said Louis B. Nabors, MD, Vice-Chair of Neurology, Professor, and Director of the Neuro-Oncology Program, University of Alabama at Birmingham Comprehensive Cancer Center. “About 25% of patients with lung cancer, for example, will develop brain metastases.”

“The incidence of brain metastases is thought to be increasing with new more effective systemic cancer treatment,” he added. Older trials have shown that surgery plus radiation therapy improves outcome for patients with brain metastases, including solitary metastasis. Radiation is used as upfront therapy for local control, as an adjunct to surgery delivered to the surgical cavity, and as a boost to maximize local control.

The ALLIANCE N0574 trial found no difference in OS between patients with 1 to 3 brain metastases treated with the addition of whole-brain radiation therapy (WBRT) to stereotactic radiosurgery (SRS), but worse cognition when WBRT was used.6 The study suggests that SRS is the preferred option for patients with 1 to 3 brain metastases amenable to radiosurgery.

The NCCN Guidelines state that patients with “limited” brain metastases (definition of “limited” is evolving) can be treated with SRS without WBRT, offering significant cognitive protection (Figure 2). “In the guidelines, we want to provide useful information. Using ‘limited’ shows that we are trying to get away from the number of metastases to emphasize the intracranial volume of disease,” Dr. Nabors explained.

“There is a lot of interest in immune-related and targeted therapies incorporated with radiation for the treatment of brain metastasis,” he continued.

The questions are, Does immunotherapy improve CNS control? Should we manage steroids differently in patients on immunotherapy? Can we delay radiation in selected patients if immunotherapy or targeted therapy is preferred?

“Lymphopenia is an established predictor of poor OS in patients with brain metastases treated with WBRT. The development of lymphopenia depends on radiation volume and fractionation. Severe lymphopenia at the end of radiation is associated with poor survival,” Dr. Nabors stated.

A recent study of patients with brain metastasis treated with an immune checkpoint inhibitor (nivolumab or pembrolizumab) and radiation found that survival was worse after the start of intracranial irradiation in those who were lymphopenic.7 Patients included in the trial had non–small cell lung cancer (NSCLC), melanoma, or renal cell carcinoma.

A separate study of 110 patients who received SRS only or SRS plus an immune checkpoint inhibitor showed that fewer brain metastases developed with concurrent SRS and immune checkpoint inhibitor.8 A single-institution retrospective trial of 21 patients with metastatic melanoma found that concurrent anti–PD-1 therapy with pembrolizumab plus radiotherapy appeared safe, and SRS was particularly effective in reducing the size of brain metastases at first follow-up.9

“The 2019 NCCN Guidelines have 2 footnotes, ‘g’ and ‘h,’ that reference drugs that can be considered with radiation. These footnotes provide greater detail on thoughts of the committee regarding use of checkpoint inhibitors with SRS,” Dr. Nabors said.

He discussed studies of brain metastasis in patients with NSCLC and melanoma. In one study of 640 patients with NSCLC treated with anti–PD-1 or anti–PD-L1, prednisone >10 mg was associated with poorer outcomes, including reduced response rates, PFS, and OS.10 The authors recommended prudent use of corticosteroids at the start of PD-L1 blockade.

The randomized, international, open-label, phase III AURA3 trial found a marked difference in PFS in patients with NSCLC and the T790M mutation who had brain metastases and were treated with osimertinib versus standard epidermal growth factor receptor (EGFR) tyrosine kinase inhibitor.12 All patients showed progression on first-line EGFR tyrosine kinase inhibitor. PFS in 144 patients with CNS metastases was a median of 8.5 months with osimertinib versus 4.2 months with platinum/pemetrexed, representing a 68% reduction in progression.

The randomized, open-label, phase III FLAURA trial showed that alectinib was superior to crizotinib as primary treatment of ALK-positive NSCLC and reduced the incidence of brain metastasis. At 12 months, CNS progression was reported in 12% of the alectinib group versus 45% in the crizotinib group.13

The 2019 NCCN Guidelines for CNS Cancers include these drugs for both newly diagnosed NSCLC and recurrent disease.

Histology for WHO grading. 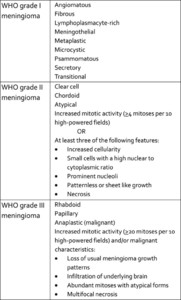 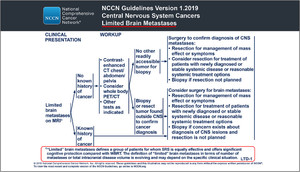