Background: Radiotherapy (RT) is a risk factor for nonmelanoma skin cancer (NMSC), specifically basal cell carcinoma (BCC) and squamous cell carcinoma (SCC), but whether features, histology, or recurrence of NMSC after RT resemble those observed in the general population is unknown. Methods: A retrospective review (1994–2017) was performed within the Adult Long-Term Follow-Up Program and Dermatology Service at Memorial Sloan Kettering Cancer Center. Demographics, clinical features, histology, treatment, and recurrence were collected for this patient cohort that was under close medical surveillance. Pathology images were reviewed when available. Results: A total of 946 survivors (mean age, 40 years [SD, 13]) were assessed for NMSC. The mean age at first cancer diagnosis was 16 years (range, 0–40 years [11]), and the most common diagnosis was Hodgkin lymphoma (34%; n=318). In 63 survivors, 281 primary in-field lesions occurred, of which 273 (97%) were BCC and 8 (3%) were SCC. Mean intervals from time of RT to BCC and SCC diagnosis were 24 years (range, 2–44 years) and 32 years (range, 14–46 years), respectively. The most common clinical presentation of BCC was macule (47%; n=67), and the most common histologic subtypes were superficial for BCC (48%; n=131) and in situ for SCC (55%; n=5). Mohs surgery predominated therapeutically (42%; n=117), the mean duration of follow-up after treatment was 6 years (range, 12 days–23 years), and the 5-year recurrence rate was 1% (n=1). Conclusions: Most NMSCs arising in sites of prior RT were of low-risk subtypes. Recurrence was similar to that observed in the general population. Current guidelines recommend surgical intervention for tumors arising in sites of prior RT because they are considered to be at high risk for recurrence. These findings suggest that an expanded role for less aggressive therapy may be appropriate, but further research is needed.

Cancer mortality rates are declining worldwide due to improving detection, treatment, and supportive care.1,2 With increased survival, there is an awareness of long-term adverse events from cancer therapy, including subsequent neoplasms. Nonmelanoma skin cancer (NMSC), principally basal cell carcinoma (BCC), is the most common subsequent neoplasm arising in childhood cancer survivors, occurring in 1% to 9% of survivors and accounting for 41% to 58% of all subsequent neoplasms.3–7 Although rarely a metastatic tumor,8 NMSC can cause significant disfigurement and local destruction. Radiotherapy (RT) is a well-known risk factor for NMSC.9–11 Retrospective studies have associated use of RT in the treatment of tinea capitis12–14 and childhood cancers with subsequent diagnosis of NMSC.3–5,15–19 Furthermore, RT use in childhood cancer is associated with a 6.3-fold increase in risk of NMSC development, and 90% of NMSCs occur within the radiation field.4

However, data are lacking on clinical features, histology, outcomes, and recurrence rates of NMSC arising within and outside the radiation field after treatment of childhood cancer. According to the NCCN Clinical Practice Guidelines in Oncology (NCCN Guidelines),20,21 BCCs and SCCs arising in sites of prior RT are considered to be at high risk for recurrence, and this risk factor alone places patients in the high-risk category, even in the absence of other known high-risk features, such as large tumor size or aggressive histologic subtype. Surgery is recommended for primary BCCs and SCCs, but the recommended surgical approaches differ according to risk category.20,21 We aimed to characterize the clinical features, histology, management, and recurrence of NMSC in childhood cancer survivors previously treated with RT, with the goal of providing more accurate risk classification.

We conducted a retrospective chart review (1994–2017) of childhood and young adult cancer survivors previously treated with RT who were referred to the Adult Long-Term Follow-Up Program (LTFU) or Dermatology Service at Memorial Sloan Kettering Cancer Center (MSKCC). The study was part of an MSKCC protocol approved by the Institutional Review Board. Informed consent was waived due to the retrospective nature of the study. Survivors aged up to 39 years at the time of initial cancer diagnosis were included.22,23

Primary cancer was defined as the first cancer diagnosis treated with RT. Maximum radiation dose data were calculated by selecting the highest dosage the patient received if multiple nonoverlapping doses were given. For anatomic sites that received multiple courses of overlapping radiation (eg, cranial and total body irradiation), doses were added to determine the maximum dose to that site. Notably, no patient received RT after the diagnosis of NMSC.

LTFU and patient dermatology and pathology records were used to determine the location of each NMSC. A lesion was considered in-field if it occurred within the irradiated skin according to the treatment documentation in the radiation oncology record. The interval from radiation treatment to first NMSC diagnosis was defined as the date of in-field radiation initiation to the date of histopathologically confirmed NMSC diagnosis.

Two dermatologists evaluated all BCCs with available images (140 tumors in 45 survivors) for consensus agreement on clinical features: presence or absence of pigmentation, lesion morphology (macule, papule, plaque, or nodule), and other features known to be associated with BCC.24

Histologic subtypes of BCC were classified using the NCCN Guidelines for BCC.20 Low-risk BCC subtypes included superficial; nodular; other nonaggressive growth patterns, such as keratotic, infundibulocystic, and fibroepithelioma of Pinkus; or any combination of the aforementioned subtypes. High-risk BCC was considered any tumor with morpheaform, basosquamous, sclerosing, mixed infiltrative, or micronodular features. Tumors that included both a low-risk and a high-risk histology were classified as high risk, as per usual practice.20

Descriptive methods were used to describe the study participants, RT received, location of lesions, clinical and dermoscopic features, histology, and treatment. In light of the descriptive nature of this work, no statistical testing was performed. 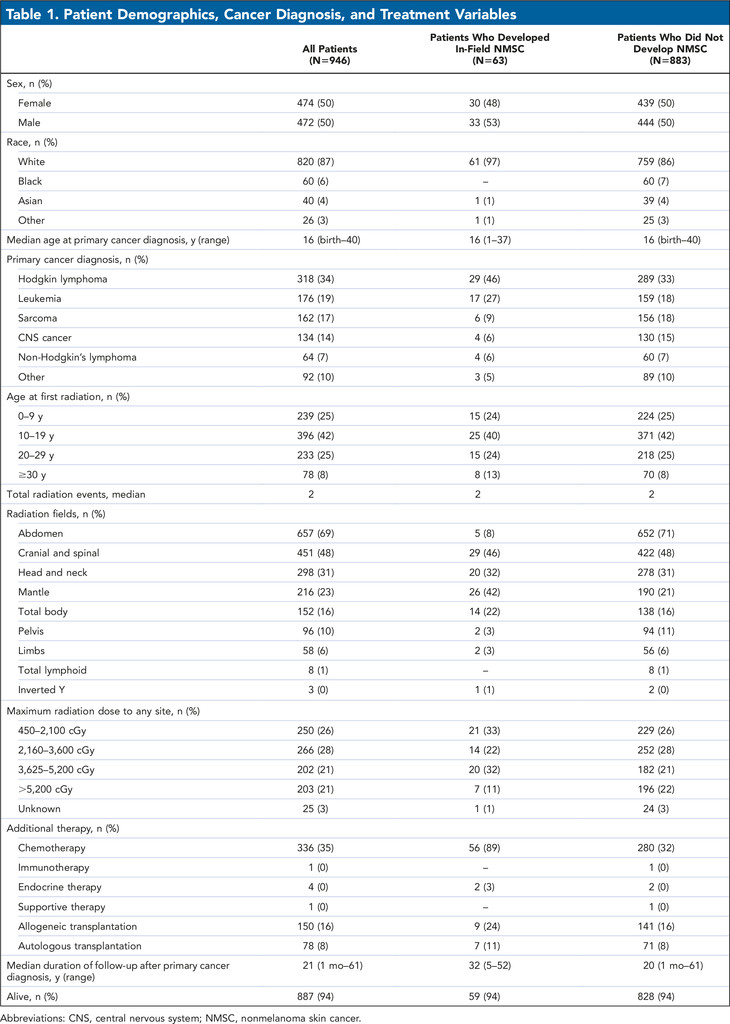 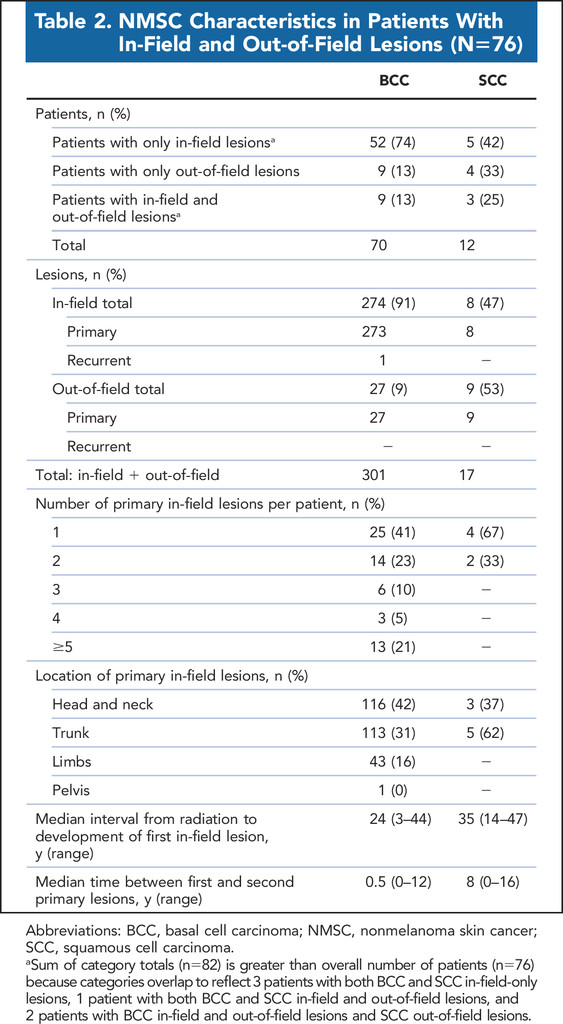 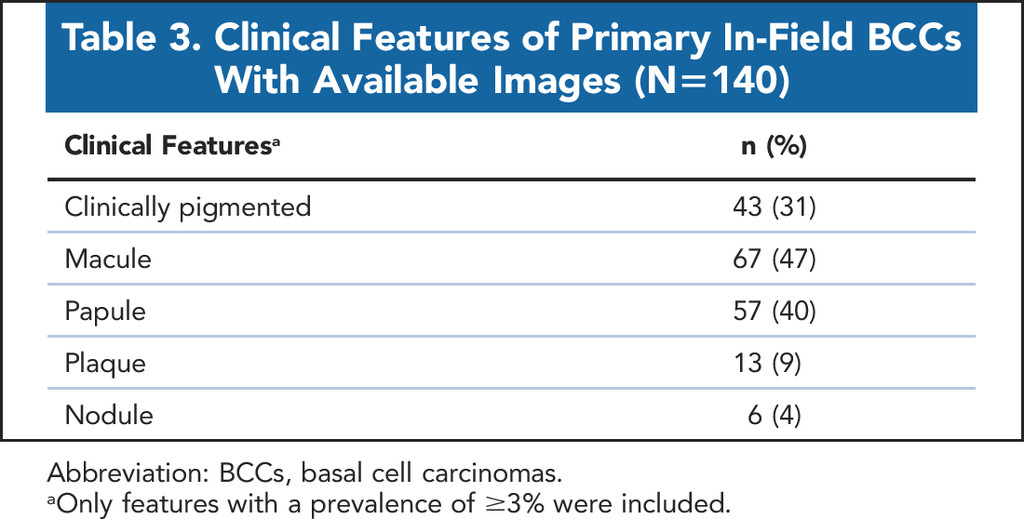 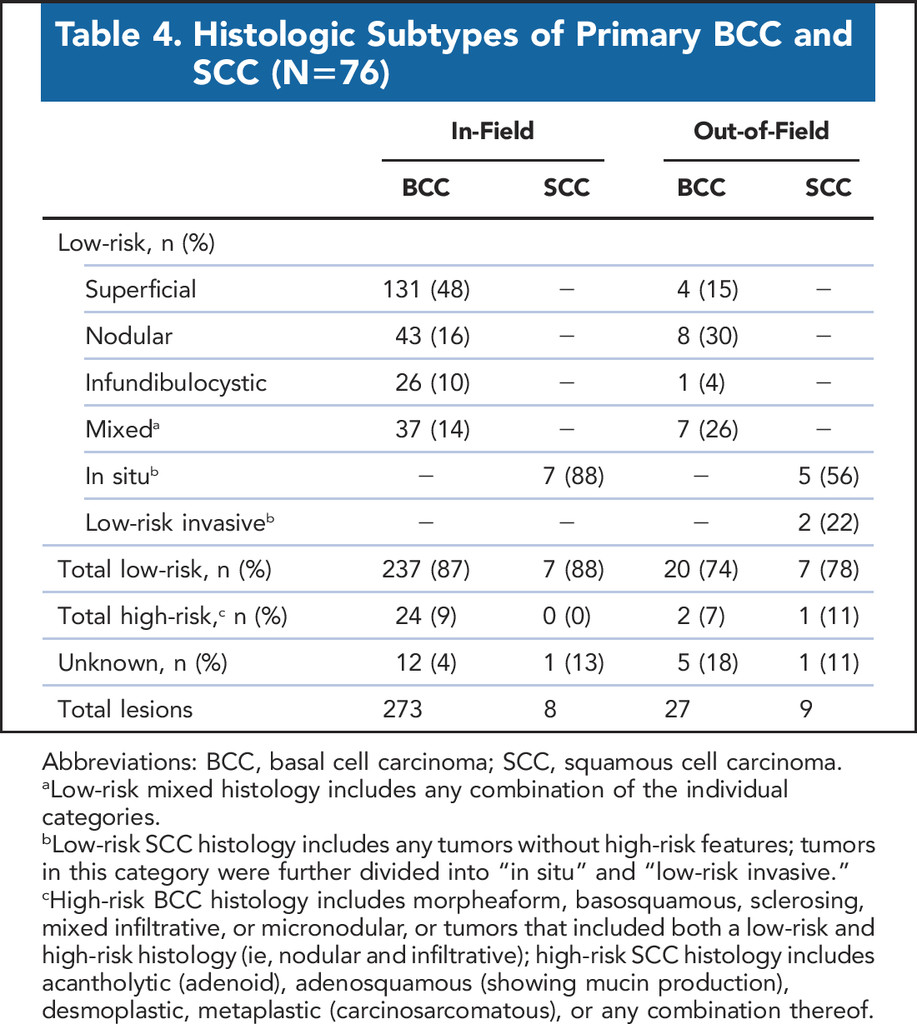 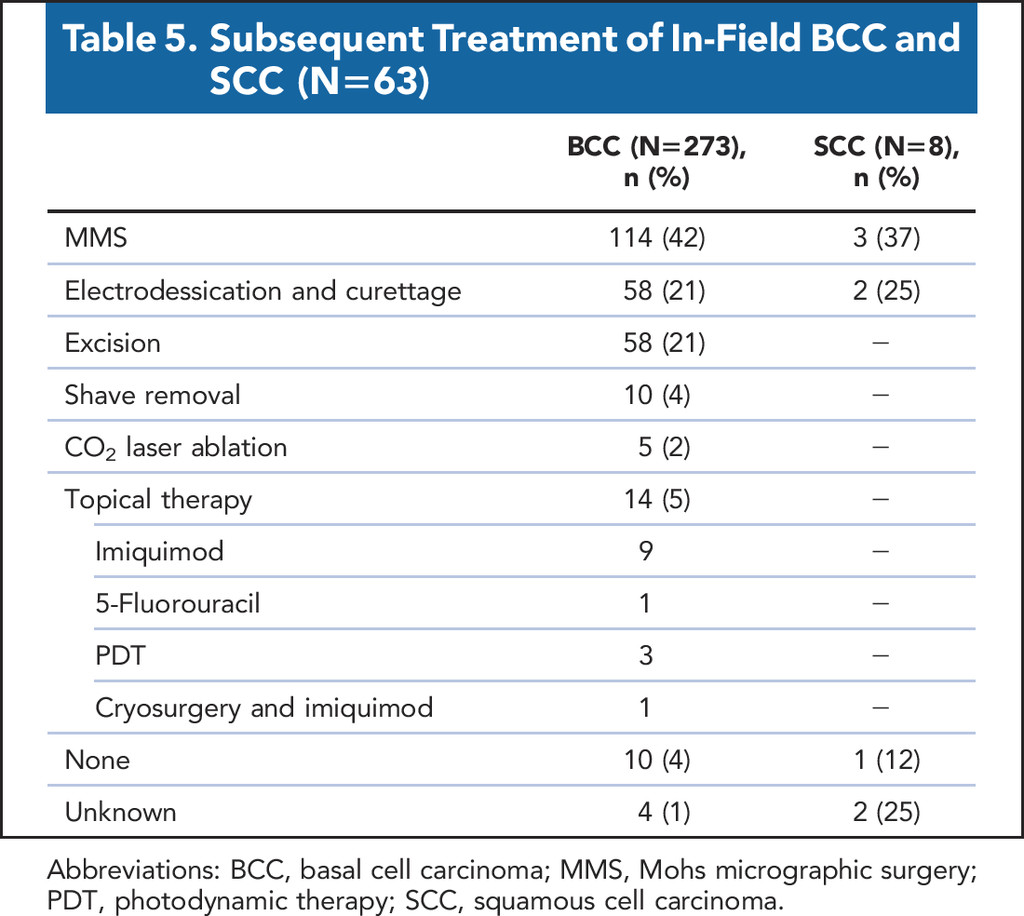 Median duration of follow-up after primary treatment of in-field NMSC was 3 years (range, 12 days–23 years [SD, 5 years]). Of the 281 in-field NMSCs, 1 in-field BCC recurred after 3 months. This tumor arose on the scalp and had a high-risk histologic subtype (infiltrative). The primary treatment modality was excision. The recurrent tumor was successfully treated with excision without evidence of recurrence after 8 months of follow-up. No in-field SCCs recurred and no out-of-field BCCs or SCCs recurred. Among 110 in-field NMSCs with at least 5 years of follow-up, the recurrence rate was 1% (n=1).

In this retrospective review of 946 adult survivors of childhood and young adult cancer, 76 patients were found to have 318 NMSCs, both inside and outside the field of prior RT. Notably, in this cohort of patients under close medical surveillance, many lesions were low-risk subtypes and many survivors had multiple lesions, but the risk of recurrence after treatment was extremely low and no NMSCs appeared among nonwhite survivors.

The overall prevalence of NMSC calculated in this study (8%) was slightly higher than that reported in the general population (5%)26 and the same as a prior report on patients treated with RT for tinea capitis.27 Similarly, the range of time between RT for cancer and diagnosis of NMSC (3–47 years) was akin to that in prior reports of patients treated with RT for cancer.28,29 Based on these results, survivors with a history of RT should start surveillance for NMSC with annual skin examinations and dermoscopy, if available, as soon as 2 to 3 years after treatment and throughout adulthood.

The range of primary in-field BCCs per patient revealed a bimodal distribution, with 41% of patients (n=25) with 1 primary lesion and 21% (n=13) with ≥5 in-field lesions. The proportion of patients with ≥5 primary lesions in this study was greater than that identified in a report of single and multiple primary tumors in the general population, in which 68.9% of patients had 1 lesion, 18.1% had 2 lesions, and 12.9% had ≥3 lesions.30

Although most in-field BCCs were located on the head or neck, more than one-third were found on the chest or back. Although the ability to infer anything meaningful from these results is limited because statistical analysis was not performed, this finding may provide a rationale for further investigation of tumor location significance. Prior reports have suggested an additive contribution of ultraviolet exposure to the development of neoplasms in RT-exposed areas.27,31–35 Based on these findings, patients with a history of RT for childhood or young adult cancer may be just as likely to develop tumors in sites that receive relatively low sun exposure. However, further research is needed.

Most of the 273 in-field BCCs (87%) were of a low-risk histologic subtype. Within this group, the greatest number of lesions were seen in the superficial subgroup (48%; n=131), followed by the nodular subgroup (16%; n=43). These findings are in contrast to those of prior small case reports that found the nodular subtype to be the most frequent arising in sites of prior RT for tinea capitis, and comprising between 33% and 60% of total BCC.27,31,32,36 In patients without a history of RT in the outpatient setting,37,38 nodular has also been the most common subtype.39 In our study, which included cancer survivors under close follow-up, the predominance of the superficial subtype may represent a characteristic of lesions occurring in fields of RT for cancer or a form of screening bias. Note that the dermoscopic features for these RT-related NMSCs are similar to those encountered in the general population.37 We found a similar frequency of shiny white blotches and strands, which have a high diagnostic accuracy for BCC,40 and support the use of dermoscopy for early detection in this setting.

Current NCCN Guidelines for BCC and SCC suggest that NMSC arising in sites of prior RT should be treated as high risk.20,21 In such cases, MMS; resection with complete circumferential margin assessment or standard excision with surgical margins wider than those recommended for low-risk cases (4-mm clinical margins recommended for low-risk BCC and 4- to 6-mm clinical margins recommended for low-risk SCC); postoperative margin assessment; and linear or delayed repair are indicated for surgical candidates and RT is indicated for nonsurgical candidates.20,21 Notably, the overall recurrence rate for BCC in our population of tumors (0.4%) was similar to that observed in the general population also treated with MMS (2.4%–3.4%),41,42 and the 5-year recurrence rate was 1% (n=1), also similar to that in the general population.41,43,44 In addition, low-risk clinical and histologic subtypes of NMSC were predominant in our cohort. Therefore, neither the observed recurrence nor the histologic subtype support characterizing these RT-related tumors as high risk, although investigating less-intensive therapy in a research setting would be prudent.20,21

Furthermore, MMS is labor-intensive and costly.45,46 In larger lesions, surgery can further contribute to local disfigurement and aesthetic outcomes may be suboptimal.45 In addition, although most excisions are performed using local anesthetic, more complex cases require general anesthesia,47 exposing survivors to unnecessary risk.48,49 Nonsurgical therapies, including 5-fluorouracil, topical imiquimod, photodynamic therapy, and cryosurgery, achieve optimal cosmetic outcomes with a relatively low risk to patients.50–52 Our findings suggest that for childhood and young adult cancer survivors who have in-field NMSC with low-risk histologic and clinical features, dermatologic therapy options with lower costs and risks should be considered in the shared decision-making process.

Among childhood cancer survivors, most NMSCs arising in sites of prior RT are of low-risk histologic subtypes and recurrence is rare. Childhood and young adult cancer survivors with in-field NMSC should consider less-intense dermatologic therapies during the shared decision-making process.

Disclosures: Dr. Lacouture has disclosed that he serves as a consultant for Bayer, Lutirs, Pierre Fabre, Adjucare, Dignitana, Teva Mexico, OnQuality Pharmaceuticals Ltd., Novartis, and Takeda Millenium, and that he receives grant/research support from Volce, US Biotest, Berg, Bristol-Myers Squibb, Lutris, Paxmn, and Novocure. The remaining authors have disclosed that they have not received any financial consideration from any person or organization to support the preparation, analysis, results, or discussion of this article.