Background: Uveal melanoma (UM) is an uncommon melanoma subtype with poor prognosis. Agents that have transformed the management of cutaneous melanoma have made minimal inroads in UM. Methods: We conducted a single-arm phase II study of pembrolizumab in patients with metastatic UM and performed bioinformatics analyses of publicly available datasets to characterize the activity of anti–PD-1 in this setting and to understand the mutational and immunologic profile of this disease. Results: A total of 5 patients received pembrolizumab in this study. Median overall survival was not reached, and median progression-free survival was 11.0 months. One patient experienced a complete response after one dose and 2 others experienced prolonged stable disease (20% response rate, 60% clinical benefit rate); 2 additional patients had rapidly progressing disease. Notably, the patients who benefited had either no liver metastases or small-volume disease, whereas patients with rapidly progressing disease had bulky liver involvement. We performed a bioinformatics analysis of The Cancer Genome Atlas for UM and confirmed a low mutation burden and low rates of T-cell inflammation. Note that the lack of T-cell inflammation strongly correlated with MYC pathway overexpression. Conclusions: Anti–PD-1–based therapy may cause clinical benefit in metastatic UM, seemingly more often in patients without bulky liver metastases. Lack of mutation burden and T-cell infiltration and MYC overexpression may be factors limiting therapeutic responses.

Uveal melanoma (UM) is an uncommon but aggressive melanocytic neoplasm arising from the choroid, ciliary body, or iris. Although radiotherapy (RT) and surgery are effective treatment options for a subset of patients with this disease, up to one-third of UMs will ultimately metastasize.1,2 In the setting of metastatic disease, treatment options are limited and prognosis is poor. Immunotherapies, specifically those targeting PD-1 and cytotoxic T-lymphocyte antigen-4 (CTLA-4), have transformed the management of cutaneous melanoma. However, these immunotherapies have demonstrated generally low response rates in retrospective case series, with responses seen in 2% to 5% of patients.3,4 Thus, effective therapies for this disease remain urgently needed.

Despite the low response rates in retrospective data, anti–PD-1–based therapy has not been explored in a prospective fashion in UM. In addition, retrospective studies may be confounded by poor performance status (PS), hepatic dysfunction, and multiple prior therapies. Thus, the effects of these agents have not been systematically characterized.

To explore this further, we conducted a phase II study of pembrolizumab in metastatic UM. To gain further insights into the correlates of response and resistance, we performed a bioinformatics analysis of The Cancer Genome Atlas (TCGA) for UM.

We conducted a multicenter, investigator-initiated phase II study of pembrolizumab in UM from 2015 through 2017 (ClinicalTrials.gov identifier: NCT02359851). Patients with metastatic UM naïve to PD-1–directed agents and with adequate organ function and PS were eligible. To detect a response rate of 20% (null hypothesis 5%) using RECIST 1.1, sample size estimates using Simon’s optimal design planned for a stage I accrual of 10 patients, with an accrual of an additional 19 patients if one response occurred in the first 10 patients. The study was opened at Vanderbilt University Medical Center and University of Chicago.

The authors queried TCGA for UMs and cutaneous melanomas.5 Mutation load was quantified for each sample and compared between UMs and cutaneous melanomas. T-cell inflammation signatures were calculated based on RNA sequencing signatures and were quantified as inflamed, intermediate, and noninflamed as previously published6,7; mutation load was then compared between T-cell–inflamed subsets. MYC gene expression and 21 target genes of MYC transcription were quantified in T-cell–inflamed subsets to determine whether MYC signatures correlated with T-cell inflammation.

We enrolled 5 patients between May 1, 2015, and January 6, 2017. The study was closed early because of slow accrual. Median age was 63 years; 3 patients had liver metastases and 2 had prior therapies (see supplemental eAppendix 1, available online with this article at JNCCN.org). Of these 5 patients, 1 had a complete response (CR; ongoing at 25.5 months), and no partial responses were observed (response rate, 20%). Another patient experienced prolonged stable disease (ongoing at 11 months), with a decrease in tumor diameter approaching a partial response (–23%), and another had stable disease lasting 11 months before experiencing progression (clinical benefit rate 60%). The remaining 2 patients experienced rapid progressive disease and functional decline before even obtaining their first CT scan. Note that tumors from patients who benefited were confirmed by molecular sequencing to harbor either GNAQ or GNA11 mutations, but the patients had either no liver involvement or had liver metastases of maximal diameter <1.2 cm. By contrast, the 2 patients lacking clinical benefit had multiple extensive liver metastases. Median progression-free survival was 11.0 months (Figure 1A) and median overall survival was not reached (Figure 1B; median follow-up, 11.1 months; range, 0.4–25.5 months).

The toxicity profile was consistent with other pembrolizumab studies. The patient who experienced the CR had fulminant type 1 diabetes (grade 4) that arose after the first dose of pembrolizumab, and stopped treatment due to adverse effects and observation of a CR at his first CT scan. Other toxicities among patients included grade 1 hypothyroidism (n=1) and rash (n=1); 3 patients had no side effects attributed to pembrolizumab. Extremely limited tissue was available for biologic correlates. Two samples, both core biopsies from liver metastases, were able to undergo PD-L1 testing, revealing absence of PD-L1 expression.

This small study demonstrated that pembrolizumab can have activity in metastatic UM. We learned several valuable lessons from this study. First, anti–PD-1 can produce profound and durable clinical benefit for individual patients with UM. Although retrospective data have indicated extremely low response rates, our study suggests that patients with good PS, adequate organ function, and, perhaps most importantly, lack of bulky liver metastases may benefit from therapy. Clearly, however, the small sample size limits generalized conclusions regarding median survival and response rates. Second, accrual to a trial with an approved agent in a rare tumor type is very challenging. Pembrolizumab was approved for cutaneous melanoma in 2014, approximately the same time as our trial’s opening. Due to frequent treatment in community practice, exclusion criteria, and subsequent availability of ipilimumab and nivolumab, accrual was a significant challenge, even at institutions that historically have had excellent accrual to UM trials. Finally, our experience corroborates other studies that have suggested that patients with both cutaneous melanoma and UM with bulky liver metastases have poor outcomes and urgently need novel therapeutics.3,12 Clinical trials of hepatic-directed therapies in combination checkpoint blockade are underway (ClinicalTrials.gov identifier: NCT02913417). In addition, epigenetic modifier programs targeting MYC have been proposed13 and have begun to be explored in clinical trials (NCT02959437). Consideration should perhaps be given to future clinical trial designs in UM to stratify patients without liver metastases, because they may have substantially better outcomes.

Disclosures: Dr. Johnson has disclosed that he serves on advisory boards for Array BioPharma, Bristol-Myers Squibb, Genoptix, Incyte, Merck, and Novartis and receives research funding from Bristol-Myers Squibb and Incyte. Dr. Luke has disclosed that he consults and receives research funding from Merck. The remaining authors have not received any financial consideration from any person or organization to support the preparation, analysis, results, or discussion of this article.

(A) Progression-free survival. (B) Overall survival. 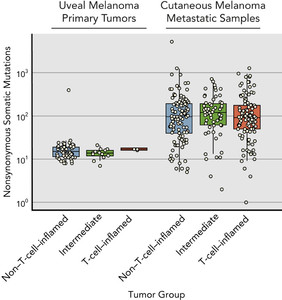 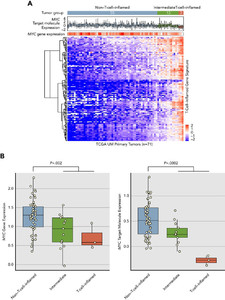