Background: The advent of targeted therapies and immunomodulatory agents has revolutionized the management of advanced cutaneous malignant melanoma (MMel) by prolonging overall survival. This study evaluated the therapeutic and survival disparities among patients with advanced MMel based on hospital volume using the National Cancer Database (NCDB). Methods: A retrospective analysis using regression models and Kaplan-Meier estimates was performed from the data obtained from the NCDB on patients with MMel diagnosed in 2004 through 2015. Results: A total of 40,676 patients with MMel were treated at 1,260 facilities. Multivariable analysis showed that facility volume was an independent predictor of overall survival (P<.0001). Compared with patients treated at high-volume facilities (tertile 3 [T3]), those with stage III disease (n=27,528) treated at intermediate- and low-volume facilities (T2 and T1, respectively) had a significantly higher risk of death (T2 hazard ratio [HR], 1.15; 95% CI, 1.09–1.20; T1 HR, 1.23; 95% CI, 1.17–1.29). Compared with patients treated at T3 facilities, those with stage IV disease (n=13,148) treated at lower-tertile facilities had a significantly higher risk of death (T2 HR, 1.16; 95% CI, 1.10–1.21; T1 HR, 1.29; 95% CI, 1.23–1.36). Further, patients with stage IV disease treated at T3 facilities (vs T1 facilities) were more likely to receive chemotherapy (38% vs 28%) and immunotherapy (23% vs 10%) (P<.0001). Conclusions: Patients with advanced-stage MMel treated at high-volume facilities had significantly improved survival and were more likely to receive chemotherapy and immunotherapy.

Cutaneous malignant melanoma (MMel) constitutes approximately 1% of all skin cancers, with an incidence of approximately 22.3 cases/100,000 person-years in the United States.1 The mortality rate is 2.7 deaths/100,000 persons, with most deaths occurring in patients with advanced MMel (ie, regional and/or distant metastases).1 Management of advanced MMel (stages III and IV) often involves the coordinated use of a multimodality approach and effective handling of toxicities. In the past few years, the advent of targeted therapies such as tyrosine kinase inhibitors and immunomodulatory agents has revolutionized the management of advanced MMel by prolonging overall survival (OS).2 However, these newer modalities are also known to be associated with unique toxicities. Management of these toxicities requires an experienced comprehensive care team, which may play a significant role in not only improving quality of life but also prolonging survival in patients with MMel. Given the heterogeneity of stage III and IV presentations and the involvement of multimodality therapies, these patients may benefit from management in facilities with comprehensive care teams with greater clinical expertise. Previous studies have described how greater hospital volume and provider experience are associated with improved survival in solid organ malignancies.3 This study analyzed the association between facility volume, treatment modalities offered, and different risk-adjusted outcomes in patients with advanced (stage III and IV) MMel.

Data from 2004 through 2015 were obtained from the National Cancer Database (NCDB). Because both facility and patient data are deidentified in the NCDB, the University of South Carolina Institutional Review Board exempted this study from review.

A total of 523,492 cutaneous MMel cases diagnosed in 2004–2015 were identified in the NCDB. Because the NCDB provides data based on the facility where the malignancy was initially diagnosed and first-line treatment was offered, patients diagnosed at one facility and treated at another facility were excluded (n=3,788). Patients with multiple malignancies (n=101,746) and those with stage I or II disease (n=239 and 500, respectively) were excluded. Cases diagnosed in 2015 (n=5,246) were also excluded from OS analysis to allow at least a 1-year follow-up. To minimize missing data, reference date cutoff of 1 was used so that the facilities were accountable for the completeness of the data. The case selection process is detailed in Figure 1.

SPSS Statistics, version 24 (IBM Corp) accounted for the clustering of patients within facilities (based on volume: T1, T2, and T3 facilities), and a multivariable Cox proportional hazards regression model was used to determine the volume–outcome relationship after adjusting for the covariables. Nonnormally distributed continuous variables were expressed as median and range. One-way analysis of variance was used to compare continuous variables, and the chi-square test was used to compare categorical variables. OS was estimated using the Kaplan-Meier method and log-rank tests. A P value of <.05 was considered statistically significant. 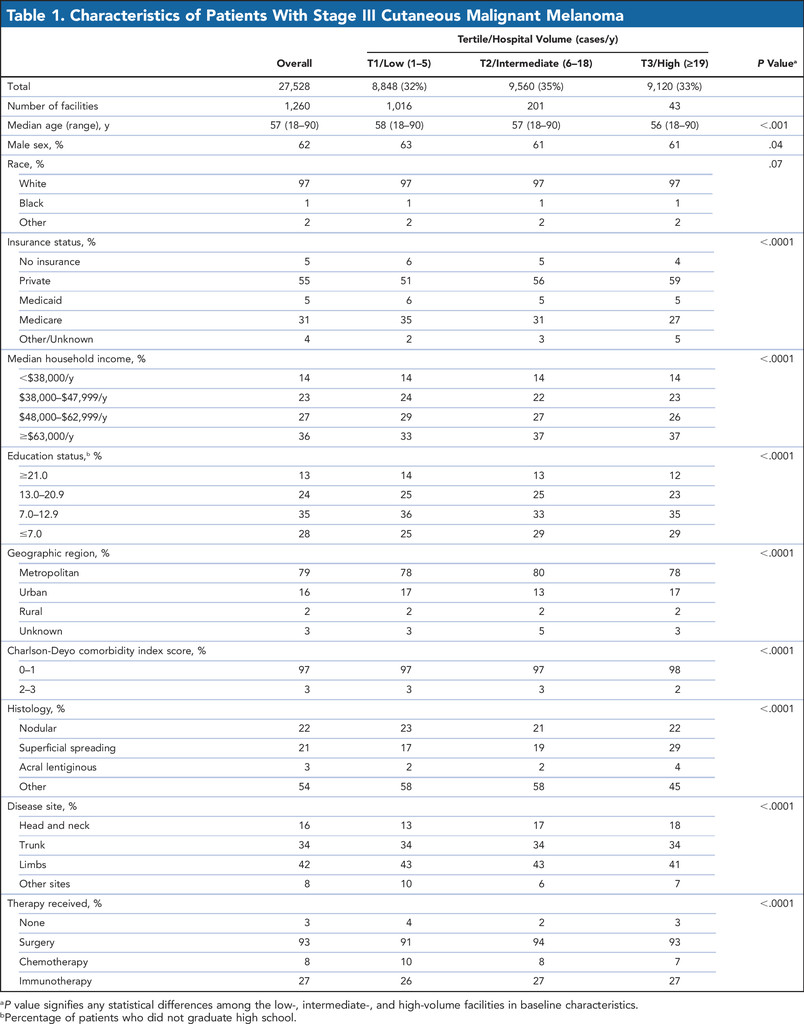 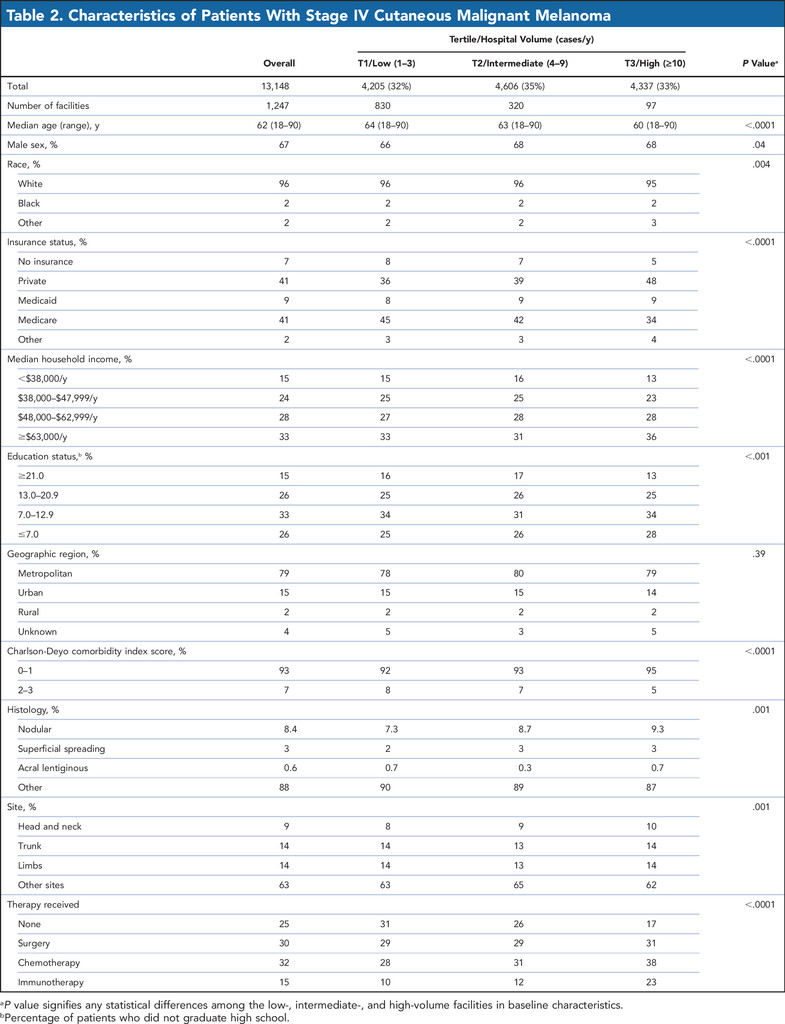 Treatment Analysis Based on Facility Volume 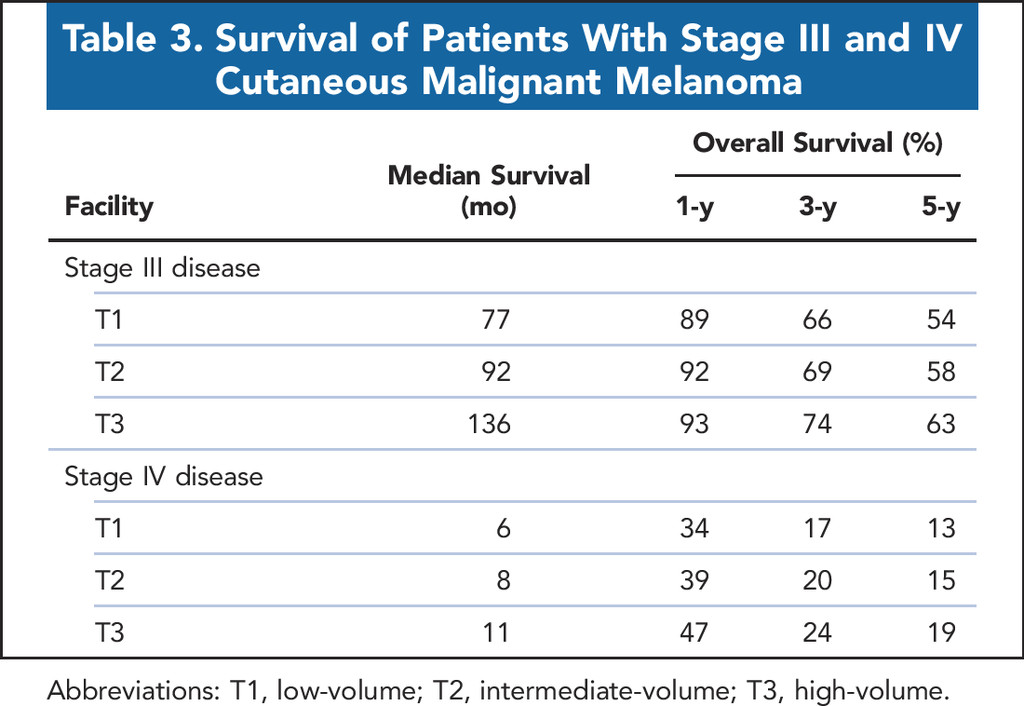 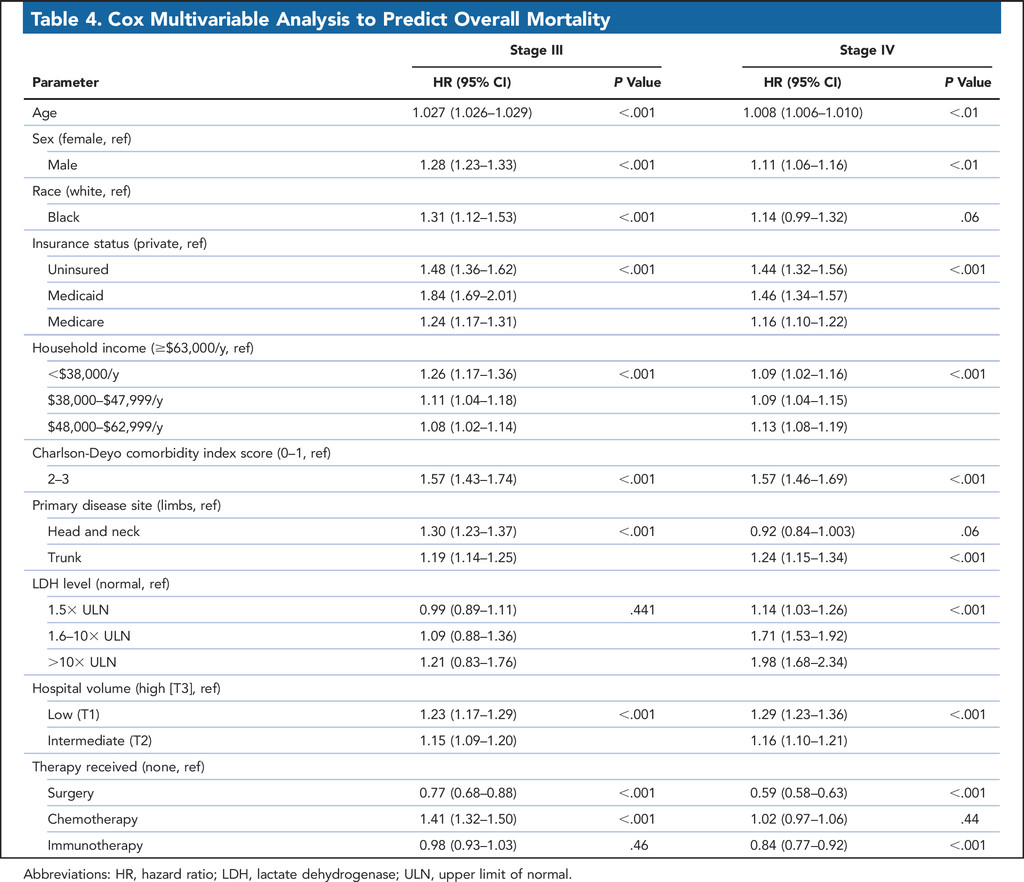 The unadjusted median OS by facility volume was 6 months for T1 facilities, 8 months for T2 facilities, and 11 months for T3 facilities (P<.001). Patients treated at T3 facilities had a significantly better 1-, 3-, and 5-year OS compared with those treated at T1 facilities (P<.001) (Table 3, Figure 2B). Cox multivariable analysis showed that female sex, white race, private insurance, higher household income, lower Charlson-Deyo comorbidity index score, lower LDH level, primary disease site of limbs, higher facility volume, and receipt of surgery and/or immunotherapy were associated with better survival (Table 4). After adjusting for all covariables, facility volume was independently associated with all-cause mortality. Compared with patients treated at T3 facilities, those treated at T2 and T1 facilities had a significantly higher risk of death (T2: HR, 1.16; 95% CI, 1.10–1.21; T1: HR, 1.29; 95% CI, 1.23–1.36). Receipt of surgery and/or immunotherapy was independently associated with prolonged OS (P<.001). Because the FDA approved immune and targeted therapeutic agents such as ipilimumab and vemurafenib in 2011, we analyzed the median OS difference before (2004–2010) and after 2011 (2012–2015) in T3 facilities and found that the median OS for patients with stage IV disease managed at T3 facilities after 2011 was significantly better than for those treated before 2011 (9.8 vs 13 months; P<.001).

In the past decade, several studies have evaluated the relationship between facility volume and survival outcomes in the field of surgical oncology.4 Given the advent of newer therapies and the increased understanding of tumor biology and molecular markers, medical management of melanoma has become more complex, often necessitating a comprehensive care team involving multiple subspecialties. With this increased complexity of care, patients may be referred more frequently to specialized high-volume (T3) facilities that can coordinate management among different subspecialties. Recent studies on the volume–outcome relationship in the medical management of solid organ malignancies have shown promising results.5,6 On the contrary, studies involving some advanced-stage malignancies, such as hepatocellular carcinoma, have shown no clinically meaningful survival benefit associated with treatment at high-volume facilities.7 In this retrospective analysis, using a national cancer dataset, we showed that patients with advanced (stages III and IV) cutaneous MMel treated at T3 facilities had lower mortality than those treated at T1 facilities, after adjusting for patient demographics, functional status, tumor characteristics, and therapy received. The difference was much more pronounced in stage III disease, with an almost 5-year median OS difference between T1 and T3 facilities.

Significant socioeconomic disparities existed in the baseline characteristics of the patients managed at the range of facilities in our cohort. Patients with private health insurance, greater education, and higher median household income were more likely to be treated at T3 facilities. Low household income, lack of health insurance, and less education have all been found to be predictors for suboptimal cancer care. This association between socioeconomic status and cancer outcomes is well established in a few population-based studies.8–10 However, we demonstrated the OS benefit of receiving treatment at T3 facilities even after adjusting for these socioeconomic factors. Moreover, previous reports have shown that patients with a higher socioeconomic status did not have significantly improved survival rates for poor-prognosis cancers.11

Our findings showed a significant difference in the rates of administration of chemotherapy (38% vs 28%) and immunotherapy (23% vs 10%) in stage IV disease between T3 and T1 facilities, respectively. Indeed, this study showed that chemotherapy did not confer an OS advantage in stage IV disease, whereas it was inversely associated with OS in stage III disease. The discrepancy in rates of immunotherapy administration in stage IV cutaneous MMel between this study and another SEER population-based study can be ascribed to the inclusion of the study population between 2000 and 2009 in the SEER study.12 The approval of immune checkpoint inhibitors by the FDA in 2011 revolutionized the management of MMel, showing promising results in improving survival.13 Since this approval, more T3 facilities may have started using checkpoint inhibitors in the management of MMel, leading to this robust 13% difference in use of immunotherapy. This possibility is supported by our findings, which showed that median OS of patients with stage IV disease treated at T3 facilities was much higher in those managed in 2012–2015 compared with those managed in 2004–2010.

Another possible explanation for better OS in T3 facilities is the availability of multidisciplinary care teams that can effectively handle treatment-related complications and have substantial experience in specialized multimodality approaches that are sometimes required for palliation and local disease control in metastatic cancers. In addition, it is more likely that patients treated at T3 facilities had better access to clinical trials of novel targeted agents and other newer modalities of therapy before their official FDA approval. Other nonmeasurable factors that may have impacted survival positively at T3 facilities include improved access to ancillary and supportive care services, as well as more resources for palliative care, which in turn has been associated with prolonged survival in advanced cancers.6,14

The study limitations are inherent to registry-based analyses. First, because of a lack of detailed information about the hospitals and specific type of therapies offered to patients (and their complications), we could not analyze specific reasons for improved survival in high-volume facilities compared with lower-volume facilities. Although one can argue that the difference in survival noted in our study may be attributed to the receipt of newer therapeutic modalities at T3 facilities, a survival advantage was evident even after adjusting for type of therapy received. Second, information on cancer-specific survival is lacking in the NCDB, and therefore patients treated at high-volume facilities may be healthier at baseline. To address this concern, we included the Charlson-Deyo comorbidity index score in the analysis, but did not see significant differences in this score among the facilities. Third, details are lacking on the percentage of patients enrolled in clinical trials among different facilities. It is likely that patients treated at high-volume facilities are more commonly enrolled in clinical trials. Fourth, the NCDB does not capture any data if patients switched institutions after receiving their first therapy. Because the NCDB data are obtained from Commission on Cancer (CoC)–accredited institutions only, the study results may not be applicable to some small rural facilities that are not CoC-accredited. Nevertheless, the NCDB provides real-world data that are not skewed by biases that arise from single institutional studies. Such a robust database is necessary for conducting volume–outcome studies effectively. Fifth, selection bias is possible in that facilities may tend to pick and choose their patients, which may potentially confound OS outcomes. Moreover, the financial cost differences and “network” issues encountered by patients in T1 versus T3 facilities may have played a role in access to care, and thus the OS differences noticed in this analysis. To address this concern, we included health insurance and socioeconomic status in the multivariate analysis and showed that patients with private insurance and higher income had better median OS compared with their counterparts. Finally, the median number of cases cutoff we used for classifying a facility as high-volume requires further validation, and no definite conclusions may be drawn regarding whether a specific type of high-volume facility should be the norm for optimal cancer care delivery.

Despite these limitations, the study results present several important considerations. Note that not all patients with advanced MMel have access to high-volume facilities, for multiple reasons that may include financial burden and the ability to travel long distances. This study sheds light on the practical “care disparities” among patients with advanced cutaneous MMel and emphasizes the need for recognizing the differences in cancer care delivery models that may help improve survival outcomes at lower-volume treatment facilities.

Comparison of unadjusted overall survival curves of (A) stage III and (B) stage IV cutaneous malignant melanoma based on annual facility volumes. 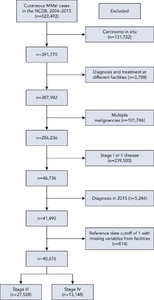