Contribution of Geographic Location to Disparities in Ovarian Cancer Treatment

Background: More than 14,000 women in the United States die of ovarian cancer (OC) every year. Disparities in survival have been observed by race and socioeconomic status (SES), and vary spatially even after adjusting for treatment received. This study aimed to determine the impact of geographic location on receiving treatment adherent to the NCCN Clinical Practice Guidelines in Oncology (NCCN Guidelines) for OC, independent of other predictors. Patients and Methods: Women diagnosed with all stages of epithelial OC (1996–2014) were identified through the California Cancer Registry. Generalized additive models, smoothing for residential location, were used to calculate adjusted odds ratios (ORs) and 95% CIs for receiving nonadherent care throughout California. We assessed the impact of distance traveled for care, distance to closest high-quality hospital, race/ethnicity, and SES on receipt of quality care, adjusting for demographic and cancer characteristics and stratifying by disease stage. Results: Of 29,844 patients with OC, 11,419 (38.3%) received guideline-adherent care. ORs for nonadherent care were lower in northern California and higher in Kern and Los Angeles counties. Magnitudes of associations with location varied by stage (OR range, 0.45–2.19). Living farther from a high-quality hospital increased the odds of receiving nonadherent care (OR, 1.18; 95% CI, 1.07–1.29), but travel >32 km to receive care was associated with decreased odds (OR, 0.76; 95% CI, 0.70–0.84). American Indian/other women were more likely to travel greater distances to receive care. Women in the highest SES quintile, those with Medicare insurance, and women of non-Hispanic black race were less likely to travel far. Patients who were Asian/Pacific Islander lived the closest to a high-quality hospital. Conclusions: Among California women diagnosed with OC, living closer to a high-quality center was associated with receiving adherent care. Non-Hispanic black women were less likely to receive adherent care, and women with lower SES lived farthest from high-quality hospitals. Geographic location in California is an independent predictor of adherence to NCCN Guidelines for OC. 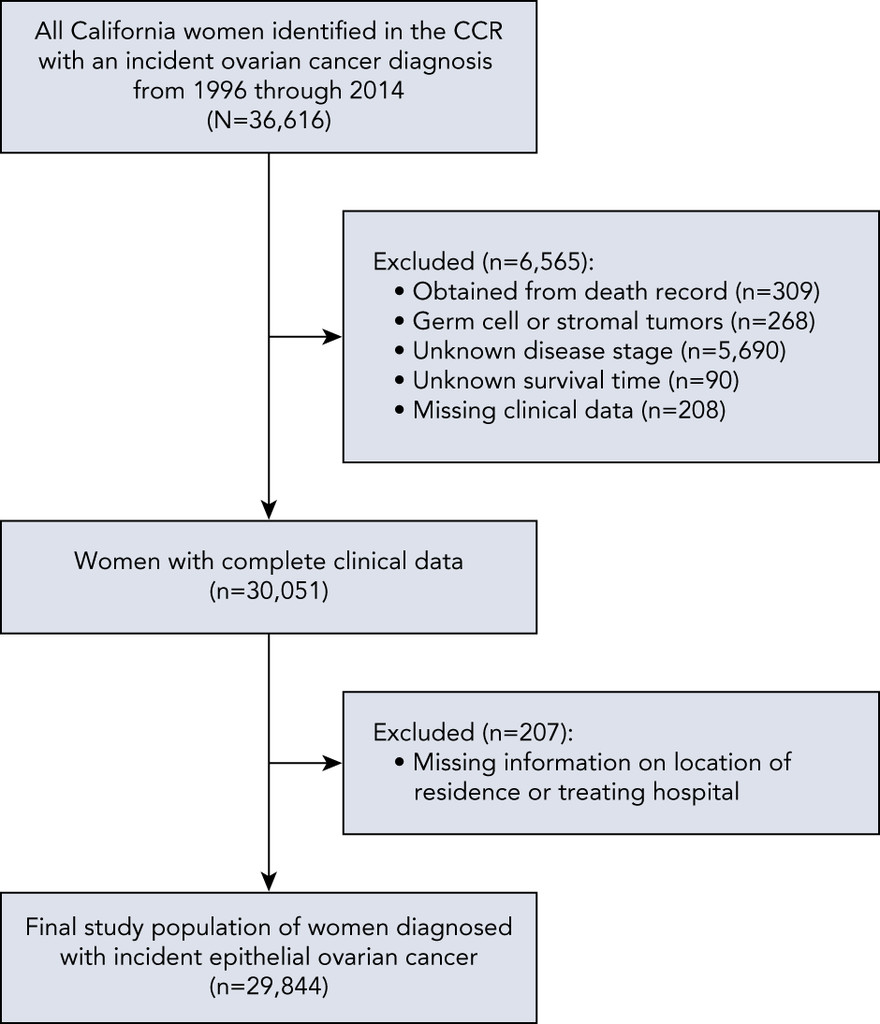 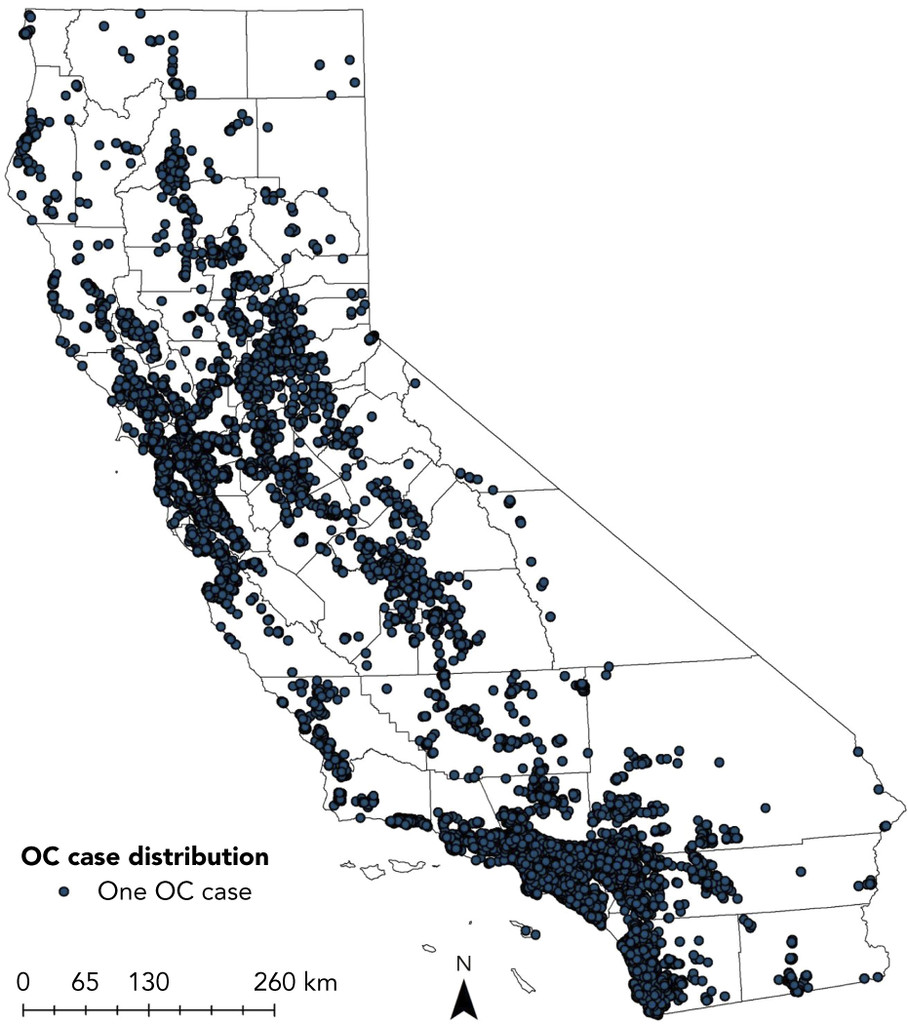 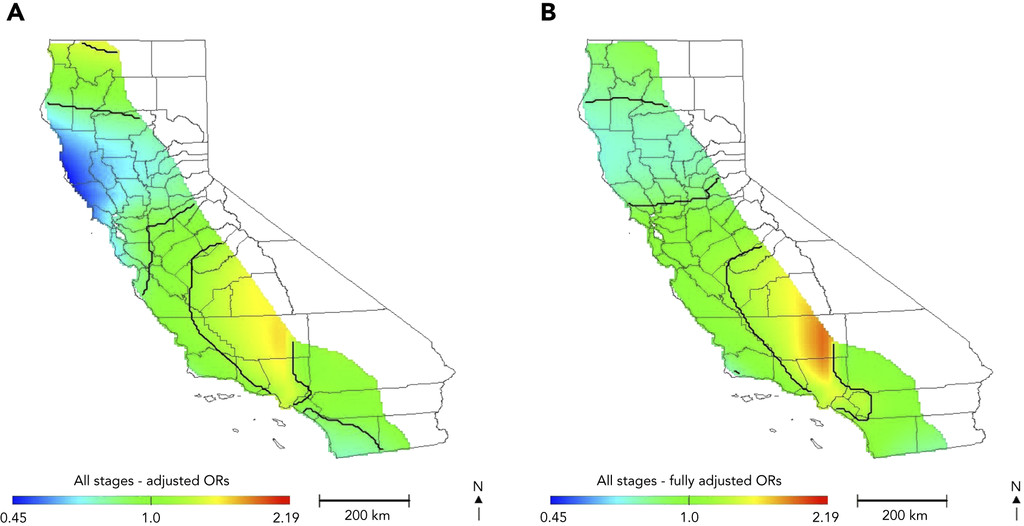 Odds of receiving nonadherent care for ovarian cancer in California: effect of geographic location. (A) Base and (B) fully adjusted models. The base model is adjusted for age and cancer characteristics only. Contour lines delineate geographic areas that exclude ORs of 1. 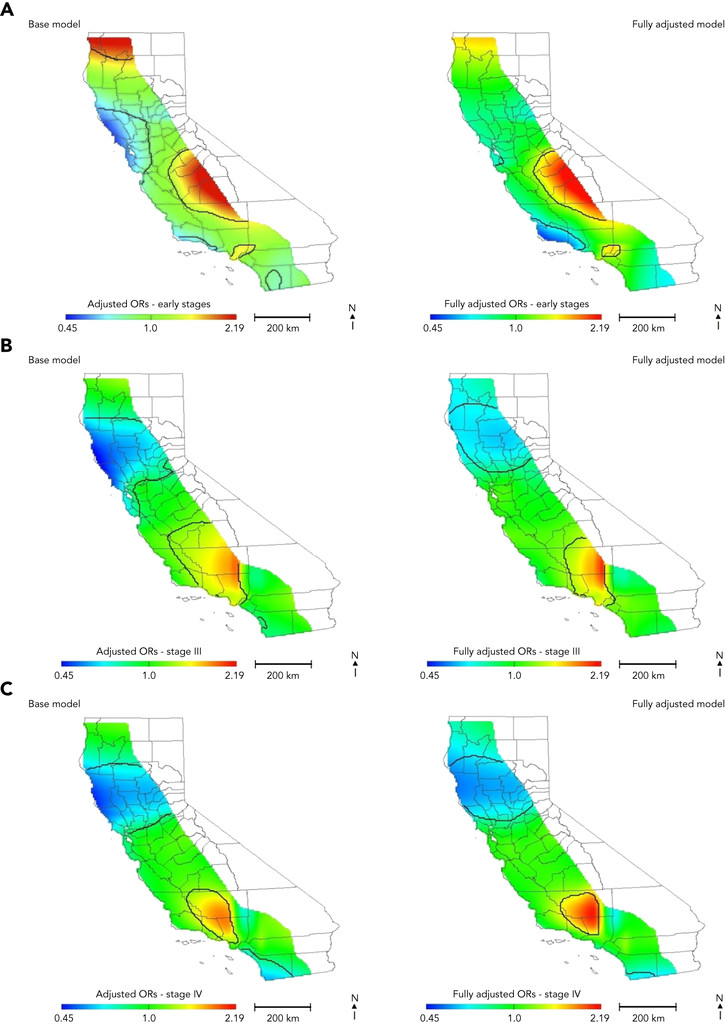 Odds of receiving nonadherent care for ovarian cancer in California: effect of geographic location, stratified by stage: (A) early stages (ie, stages I and II), (B) stage III, and (C) stage IV. Contour lines delineate geographic areas that exclude ORs of 1. Base model is adjusted for age and cancer characteristics only. 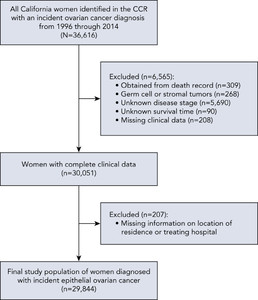 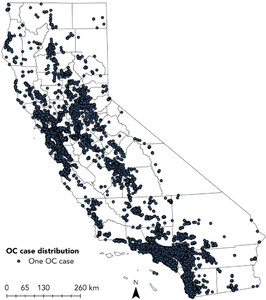 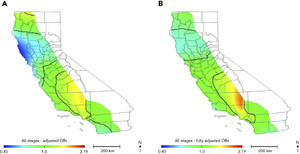 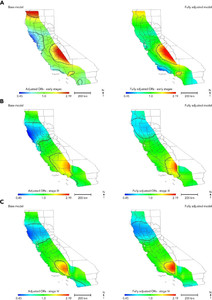