Search for other papers by Brandon A. Mahal in
Current site
Google Scholar
PubMedClose
MD
,
Herbert Zeh
Herbert ZehDivision of Surgical Oncology, Department of Surgery, and

Multiple randomized trials have shown improved survival with the addition of adjuvant chemotherapy after surgical resection for patients with pancreatic adenocarcinoma.1–5 In 2000, the NCCN Clinical Practice Guidelines in Oncology (NCCN Guidelines) for Pancreatic Adenocarcinoma recommended 5-FU–based chemoradiation for all resected tumors based on data from a study performed by the Gastrointestinal Tumor Study Group,6,7 and after publication of results from the CONKO-001 trial in 2007, gemcitabine monotherapy became a standard adjuvant treatment for resected pancreatic cancer.5,8 More recent trials, including ESPAC-43 and PRODIGE 24,1 which compared adjuvant gemcitabine versus modified FOLFIRINOX (mFOLFIRINOX; fluorouracil/leucovorin/irinotecan/oxaliplatin), have shown a survival benefit with multiagent versus single-agent chemotherapy. According to current NCCN Guidelines, gemcitabine + capecitabine, mFOLFIRINOX, gemcitabine monotherapy, and 5-FU/leucovorin are all category 1 recommendations for adjuvant therapy.9

Despite these consensus recommendations, studies have shown that, outside of the clinical trial setting, many patients do not go on to receive adjuvant chemotherapy.10–13 Variables shown to affect the delivery of postoperative chemotherapy include clinical factors, such as patient age, extent of postoperative complications, and presence of lymph node metastases.10–13 In contrast, sociodemographic characteristics influencing receipt of adjuvant chemotherapy remain undefined, and the extent of these disparities in routine practice is unknown.

Given the increasingly apparent benefit of chemotherapy in resected pancreatic cancer, we sought to examine the patterns of adjuvant chemotherapy by sociodemographic characteristics in a comprehensive national database including patients with stage I–III pancreatic adenocarcinoma undergoing definitive surgical resection.

The National Cancer Database (NCDB) captures 70% of incident cancers in the United States treated at American College of Surgeons’ Commission on Cancer–accredited programs and was used to identify patients diagnosed with pathologic stage I–III pancreatic adenocarcinoma who underwent definitive surgery, defined as partial or total pancreatectomy, from 2004 through 2015. Patients who underwent local tumor excision only, had no surgery, or had an unknown surgery type were excluded. Only patients receiving all of the first course of treatment or for whom a decision was made not to treat at the reporting facility were included. Patients whose first cancer diagnosis was not pancreatic adenocarcinoma were excluded. In addition, patients surviving <60 days after surgery and those with unknown insurance status, race, cancer stage, income level, or treating facility type were also excluded.

The primary endpoint of interest was receipt of any adjuvant chemotherapy (single-agent or multiagent). Multivariable logistic regression defined the adjusted odds ratio (aOR) of receipt of adjuvant chemotherapy (yes vs no) by race (white [ref], black, Asian, other/unknown), age (continuous), sex (male [ref], female), pathologic cancer stage (I [ref], II, III), Charlson-Deyo comorbidity score (0 [ref], 1, 2, 3), facility type (academic/research center [ref], community cancer program, comprehensive community cancer program, integrated network cancer program), insurance type (private insurance/managed care [ref], uninsured, Medicaid, Medicare, other government), median annual household income (≥$46,000 [ref], $35,000–$45,999, $30,000–$34,999, <$30,000), readmission within 30 days of surgery (no [ref], yes), and treatment era (2004–2006 [ref], 2007–2009, 2010–2012, 2013–2015). The Charlson-Deyo comorbidity index is the most widely used measure of comorbidity and was developed to predict 1-year mortality based on 22 conditions, such as heart disease, AIDS, and diabetes. Each condition is assigned a score of 1, 2, 3, or 6, depending on the risk of dying associated with each one. Scores are summed to provide a total score to predict mortality.15 Given that major cancer organizations have sought to reduce disparities by increasing access to academic centers,16–18 among other strategies, the multivariable model was repeated, restricted to patients treated at academic/research centers, to assess whether similar disparities existed among this subgroup. Fisher exact test was used to compare the proportion of patients receiving adjuvant chemotherapy by patient characteristic.

Among patients who did not receive any adjuvant chemotherapy, the proportion who refused treatment was assessed. Multivariable logistic regression defined the aOR of refusing chemotherapy using the same variables as earlier.

For each model, predicted margins were calculated to show prevalence standardized to distribution of the model covariates. Statistical testing was 2-sided, with α=0.05. Data were analyzed using STATA, version 15.1 (StataCorp). The study was deemed exempt from review by the University of Texas Southwestern Medical Center Institutional Review Board.

Multivariable Logistic Regression of Receiving Any or Multiagent Chemotherapy 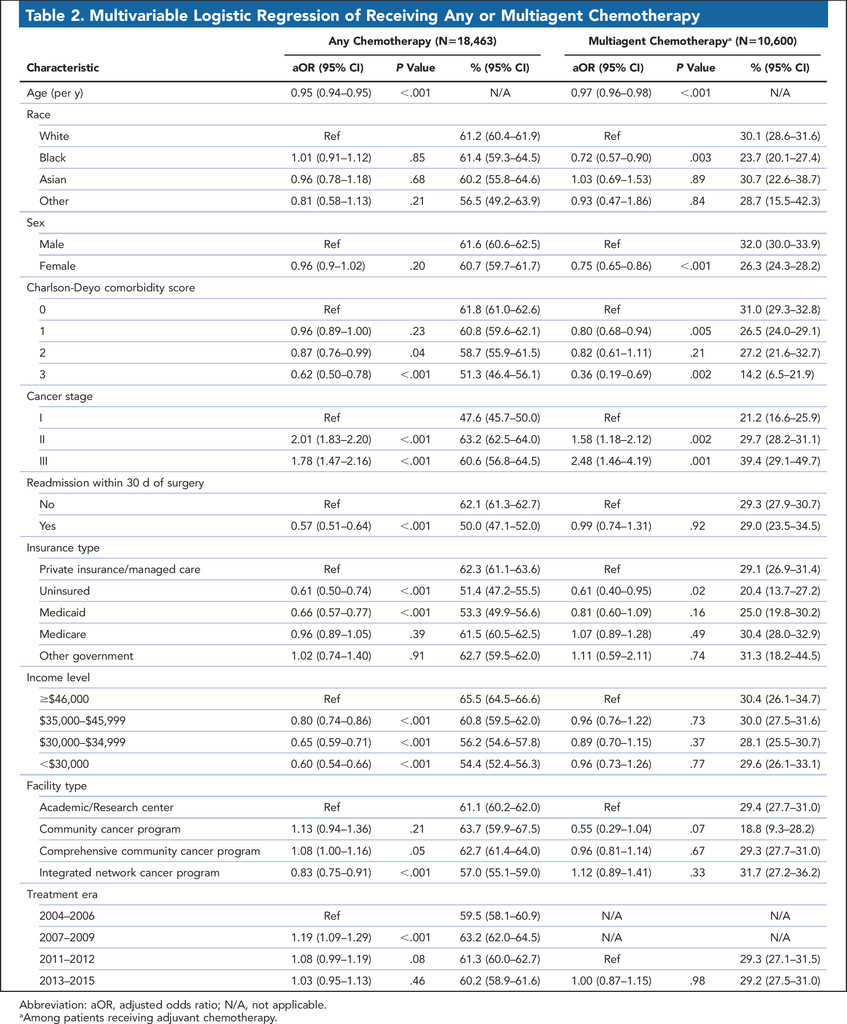 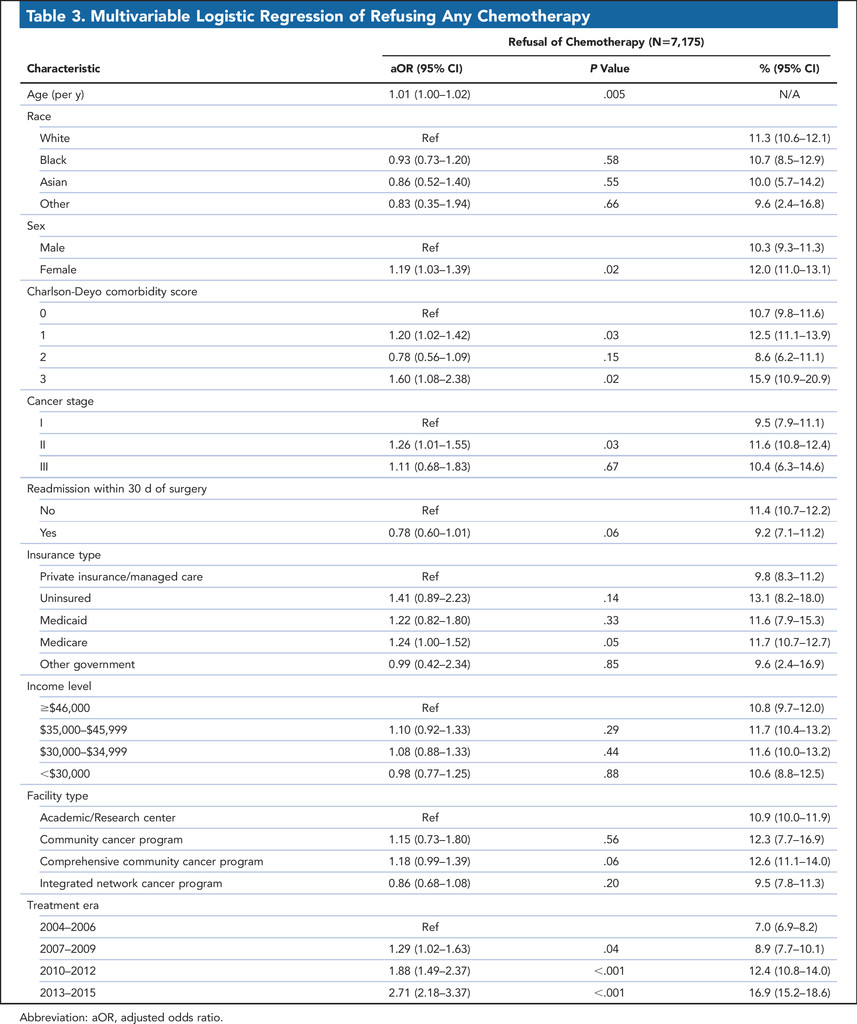 In this study, the largest US cancer registry was used to assess trends in management of potentially curable pancreatic cancer. We observed significant disparities in the receipt of timely adjuvant chemotherapy among patients with resected stage I–III pancreatic cancer over an 11-year period. Specifically, receipt of any adjuvant chemotherapy was associated with economic factors, such as insurance type and income, whereas receipt of multiagent chemotherapy appeared to be associated with demographic variables, including sex and race. These associations persisted when analyses were restricted to patients treated at academic centers. Furthermore, given the positive interaction term between black race and age/comorbidity status, the disparity in treatment with multiagent chemotherapy was particularly relevant for the younger, healthier cohort, which may benefit the most from aggressive chemotherapy.

Given the well-established increased survival associated with receipt of adjuvant chemotherapy,2–5 our findings have several important implications. First, in contrast to prior studies that have shown development of postoperative complications, readmission rates, age, and comorbidity to be associated with receipt of adjuvant chemotherapy,10–13 our study suggests that sociodemographic variables are also strongly predictive of whether patients receive chemotherapy for resected pancreatic cancer, independent of clinicopathologic characteristics. Therefore, given that differences in quality of care may contribute to disparities in cancer survival, our findings suggest that outcomes for certain subgroups of patients could be improved by increasing the proportion receiving guideline-concordant adjuvant chemotherapy. In particular, black patients who were young and healthy were significantly less likely than their nonblack counterparts to receive multiagent chemotherapy, and the difference between these groups was 9.4%. We cannot be sure of the drivers of this interaction; however, we hypothesize that it could be due to overall lower rates of recommending aggressive chemotherapy in older and less healthy patients, such that disparities between racial groups were not apparent among those subgroups. This finding suggests that the subgroup of black patients who may be optimal chemotherapy candidates with the highest potential for improved outcomes could be missing the opportunity to benefit from aggressive postoperative therapy. Notably, this racial disparity was only observed for receipt of multiagent chemotherapy, which was not an NCCN category 1 recommendation during our study interval. Given the recent publication of the PRODIGE 24 study findings, showing a significant disease-free and overall survival benefit associated with adjuvant mFOLFIRINOX versus gemcitabine alone,1 our results should prompt further investigations regarding whether racial disparities remain among patients currently undergoing treatment.

The persistent disparities in receipt of adjuvant chemotherapy, including multiagent chemotherapy, observed at academic cancer centers in this study are concerning. Several major cancer organizations have sought to reduce disparities in outcomes of high-risk cancers by improving access to research-focused cancer centers, among other initiatives.16–18 However, even among academic medical centers, receipt of any adjuvant chemotherapy appeared to be determined in part by income level and insurance type, despite the general notion that academic facilities accept a greater number of insurance plans, including government-sponsored insurance, and have resources to provide care for disadvantaged individuals. Similarly, black patients at academic centers were less likely to receive multiagent chemotherapy. We hypothesize several reasons for this persistent disparity. It is possible that cancer care systems, such as those of large academic centers, are complex to navigate and that at-risk groups experience greater difficulty in obtaining proper treatment as a result. Alternatively, differences in treatment received could be attributed to patient preferences or physician bias. Our results suggest that mitigating disparities in quality of care for pancreatic cancer will require more than simply increasing access to treatment at academic cancer centers; specifically, policies and guidelines should be established to regularly track receipt of guideline-concordant care by relevant sociodemographic characteristics. The availability of patient care navigators could also help mitigate disparities in treatment by providing assistance to individuals at greatest risk for not receiving care due to the increasing complexity of the healthcare system.

The analysis of factors associated with documented refusal of chemotherapy merits further discussion. Prior studies have also shown that women are less likely than men to receive aggressive cancer treatments21; however, this sex disparity has not previously been shown to be related to refusal of treatment. Interestingly, despite increasing evidence of a significant benefit from adjuvant chemotherapy over the past 2 decades, more recent treatment era was associated with higher odds of chemotherapy refusal. This may reflect increased patient involvement in treatment decision-making, which is generally considered a progressive and positive feature of the healthcare system; that said, such a trend could be problematic if it facilitates poorer adherence with established guidelines for cancer care, especially now that such impressive survival results with more-intensive adjuvant therapy have been shown. Notably, there was no association of black race, income level, and insurance type with refusal of chemotherapy, although these variables were associated with lower odds of receiving any chemotherapy or multiagent chemotherapy. This finding is in contrast to prior studies that have shown higher rates of refusal of definitive cancer treatment among black patients.22–25 In addition to citing physician mistrust and medical suspicion as personal factors that may be driving the higher refusal rates,22 these studies suggest that insurance type and access to care are also likely, if not dominant, contributors.26,27 Given that race, insurance type, and income were not found to be associated with chemotherapy refusal in our cohort, these findings should serve as an impetus for further research regarding potential biases among providers or systems-level issues that may be interfering with treatment among these subgroups.

Our findings must be viewed within the limitations of the NCDB. The cohort was limited to patients treated at American College of Surgeons’ Commission on Cancer–accredited cancer programs, and thus our results may not reflect patterns of care at other cancer centers. However, the NCDB is the largest US cancer registry, capturing 70% of incident cancers, and it also includes comprehensive treatment information, including details regarding chemotherapy administration, and is therefore one of the most robust databases for analyzing disparities in patterns of care. Second, multiagent chemotherapy was not included in NCCN Guidelines as a category 1 recommendation until 2017; currently the NCDB includes patients treated up to 2015. However, changes in physician practice patterns often precede the establishment of definitive guidelines, and the disparities observed in our study suggesting that black patients were less likely to receive more aggressive postoperative chemotherapy are noteworthy because multiagent chemotherapy was eventually shown to be associated with improved survival. Future studies are needed to assess patterns in receipt of multiagent chemotherapy after publication of results from the ESPAC-4 and PRODIGE 24 trials.1,3 Third, refusal of chemotherapy was recorded only for patients who refused any chemotherapy; therefore, we cannot determine whether certain patients were more likely to refuse multiagent chemotherapy (and choose single-agent chemotherapy) and therefore assess whether this could have contributed to their lower odds of receiving multiagent chemotherapy. In addition, refusal was physician-recorded in the NCDB without further elaboration on the specifics; thus, it is possible that patients were incorrectly categorized as refusing chemotherapy, and we do not have further information on the reasons.

Our study shows sociodemographic disparities in the receipt of adjuvant chemotherapy for pancreatic cancer. Further research is needed to identify the processes leading to the lower likelihood of certain patient subgroups receiving postoperative adjuvant chemotherapy, including multiagent chemotherapy. Once these issues are identified, interventions should be undertaken to mitigate these disparities, with the goal of improving treatment outcomes for all patients with pancreatic cancer.