There is a scarcity of data to guide management recommendations. No randomized trials exist, and the results of small retrospective case series have led to contradictory conclusions. A study by the Rare Cancer Network showed improved survival with CRT alone compared with surgery/radiotherapy (RT) or surgery alone; its recommendation was to reserve definitive surgery with abdominoperineal resection (APR) for salvage treatment.10 However, Papagikos et al11 found that patients with anal adenocarcinoma treated with RT had high rates of both local and distant failure compared with those with SCCA, and they recommended preoperative CRT followed by APR to maximize disease control.

The NCDB includes patient data from >1,500 accredited facilities and captures >70% of newly diagnosed cancer cases in the United States.12 The data used in this study are derived from a deidentified NCDB file.

Descriptive statistics and analysis of national patterns of care were generated using the full cohort of 3,729 patients. We then performed a survival analysis focused on a smaller cohort of 1,747 patients with locally advanced disease (T2–T4 or node-positive) receiving CRT or CRT followed by surgery. For this analysis, the primary endpoint was overall survival (OS).

All variables were selected a priori. Sociodemographic variables, including age, year of diagnosis, race, insurance status, facility type, and facility location, were defined according to their respective data fields in the NCDB data dictionary.13 Race was categorized as non-Hispanic white, Hispanic white, black, or other (including Hispanic, Asian, and other); insurance status was grouped into government (Medicare/Medicaid/other), private, or uninsured; and facility locations were grouped into Northeast, South, Midwest, and West regions.

The T and N stages were defined by the clinical T and N stage fields, respectively. The AJCC stage was recorded based on the corresponding field; when missing, the stage group was classified based on clinical T and N staging. Histology of adenocarcinoma was defined using ICD-O-3 codes, including codes 8140–8145, 8200–8220, 8255–8263, 8320–8384, 8400–8490, and 8550–8574.14 For treatment variables, receipt of surgery, type of surgery performed, and chemotherapy and RT were defined by their respective fields in the data dictionary. Concurrent CRT was defined as initiation of chemotherapy and RT within a 14-day interval. Receipt of surgery was defined according to the corresponding codes in the data dictionary, with codes 20–27 representing local excision and codes 60–63 representing APR.

Descriptive statistics were calculated for each of the demographic, pathologic, and treatment variables. OS was plotted using the Kaplan-Meier method, with differences across groups assessed using the log-rank statistic. Survival time was calculated from the date of diagnosis until the date of death or last contact if alive. Patients alive at the end of follow-up were censored at the last contact date. To handle missing data, the corresponding value was coded as “unknown” for all analyses, and a complete case analysis was performed.

Survival analyses were performed using the log-rank test for univariate analysis and Cox proportional hazards regression for multivariate analysis to estimate hazard ratios (HRs). The final parsimonious multivariate Cox model was formed by using hierarchical backward selection of variables significant at P<.10. After hierarchical backward selection, variables included were age, comorbidity score, insurance status, facility type, T stage, N stage, and receipt of surgery. Patients with missing follow-up information were excluded from all survival analyses. The proportional hazards assumption was assessed for all variables in the final multivariate analysis and was not violated.15

Multivariate logistic regression was performed to assess factors predictive of receiving surgery. This was also used to generate propensity scores, with all factors included in propensity score generation, regardless of statistical significance. We specified a subset analysis a priori to compare HR by AJCC overall stage and by primary site code.

Propensity score–matched analysis was performed. One-to-one nearest neighbor matching without replacement was performed for patients with complete follow-up to form the final propensity-matched cohort, with caliper width of 0.10. To further support the assumption of balance between groups, the propensity score was stratified into quintiles and a standardized difference between the treatment groups of <0.10 was validated. Cox proportional hazards regression was performed for survival analysis in the final matched cohort. All statistical analyses were performed using SPSS Statistics, version 23 (IBM Corp.).

Analyzing Predictors of Use for Surgery After CRT

Comparative Use of Surgery in Patients Receiving CRT 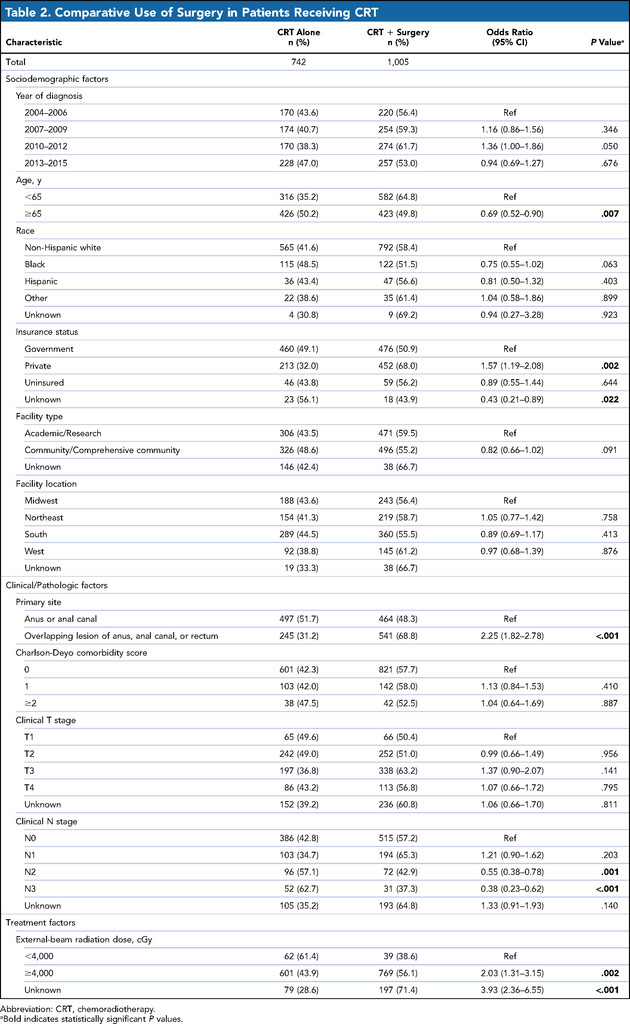 OS was strongly associated with receipt of surgery in univariate Kaplan-Meier analysis. Median survival was 79 months and 5-year OS was 61.1% for patients receiving CRT plus surgery compared with 42 months and 39.8%, respectively, for those receiving CRT alone (log-rank P<.001). Kaplan-Meier curves comparing CRT with or without surgery are depicted in Figure 2A. 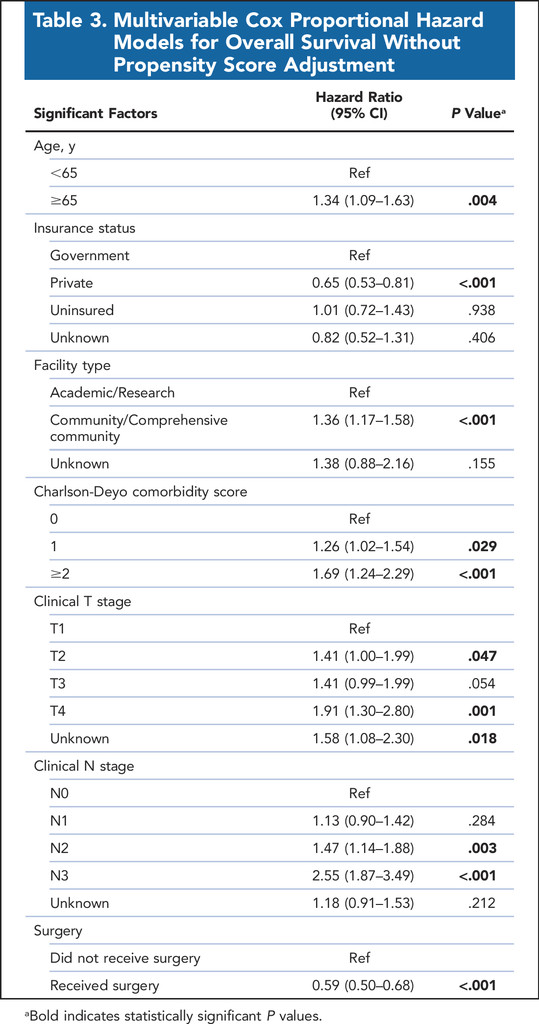 Propensity score one-to-one matching was performed, adjusting for use of surgery. A total of 1,156 patients with complete follow-up data and meeting caliper width requirements were included in the final matched cohort: 578 receiving surgery and 578 not receiving surgery. Figure 2B shows Kaplan-Meier survival curves in the propensity-matched cohort. After adjustment for surgery use with propensity score matching, receipt of surgery was associated with improved survival by log-rank test (P<.001) and univariate Cox regression (HR, 0.58; 95% CI, 0.49–0.68; P<.001).

Given the rarity of this disease, prior analyses have been limited to small retrospective series. A series from MD Anderson Cancer Center found poor outcomes, with a 5-year disease-free survival of 19%, in patients treated with CRT alone, and a later report from the same institution showed a survival benefit with the addition of surgical resection.11,16 A separate series from Memorial Sloan Kettering Cancer Center examined patients receiving surgery (either APR or local excision) and found a 63% local control rate in 13 patients at a median follow-up of 19 months.17 Both of these series concluded that CRT followed by APR is a reasonable treatment option. In contrast, Belkacémi et al10 analyzed 82 patients from the Rare Cancer Network, showing a 5-year OS rate of 58% in patients treated with CRT; they concluded that APR should be reserved for salvage treatment. However, their study did not include patients treated with CRT followed by surgical resection, which is the focus of our present analysis.

It is important to note some other limitations of our study. All data were collected retrospectively through the NCDB, and therefore our study is subject to the usual biases of retrospective database studies. In particular, the NCDB does not contain any information regarding treatment intent. Therefore, patients who do not proceed to surgery after CRT due to circumstances, such as development of metastatic disease, are classified as receiving CRT alone even if they were initially intended to undergo surgery. Furthermore, guarantee-time bias could potentially skew our results, although we sought to mitigate this effect through a conditional landmark analysis excluding patients with follow-up of <90 days. 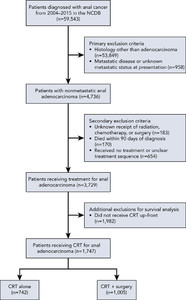 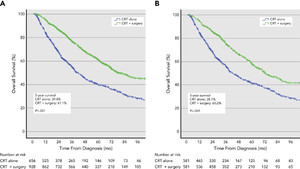