Primary malignant melanoma of the pineal gland is a rare disease entity, with only 24 cases reported in the literature to date.1 Given the rarity of this malignancy, management is primarily based on case reports and literature reviews. We present the first reported case of a patient with a subtotally resected pineal melanoma achieving an excellent clinical outcome using a combination of adjuvant radiotherapy (RT) and pembrolizumab, and provide a thorough review of the literature and discussion of current management strategies.

A 75-year-old white woman with a past medical history of hypertension and hypercholesterolemia and a family history of male breast cancer in a paternal uncle and renal cell carcinoma in a son presented to the emergency department with a 10-day history of progressively worsening altered mental status, confusion, and gait disturbance. She complained of vertical gaze paresis and diplopia consistent with Parinaud syndrome. In addition, she complained of increasing difficulty performing tasks requiring fine coordination, eyestrain headaches, worsening gait imbalance, and loss of taste sensation. On physical examination, her vital signs were within normal limits; she was alert and oriented to person and place but exhibited disorientation to time. Her gait was wide-based and slow, strength and sensation were intact in bilateral lower extremities, and she exhibited vertical gaze palsy with downward gaze preserved. All other cranial nerves were intact. No pronator drift was noted, and coordination was appropriate. Results of basic laboratory workup were normal, including blood count with differential, complete metabolic panel, and urinalysis with culture.

The patient underwent a brain CT without contrast, which revealed a poorly defined hyperdense mass in the pineal region associated with moderate obstructive hydrocephalus. Follow-up MRI revealed a homogenously enhancing pineal lesion on T1-wighted images, inseparable from the tectum, that measured 3.4 (anteroposterior) × 2.6 (mediolateral) × 2.4 cm (craniocaudal) (Figure 1A). A local mass effect was noted on the tectum and anterior aspect of the brain stem extending into the cerebral aqueduct, with associated perilesional vasogenic edema.

The patient underwent urgent image-guided suboccipital craniotomy for pineal tumor resection using a supracerebellar infratentorial approach. Intraoperative findings revealed a hyperemic-appearing lesion situated in the pineal region with encasement of the precentral cerebellar vein and was severely adherent to portions of the midbrain and brainstem. Given these findings, the tumor was only amenable to partial resection, with residual tumor remaining postoperatively measuring 2.9 × 2.6 × 2.4 cm on MRI (Figure 1B).

The patient underwent systemic staging, including MRI total spine, total-body PET/CT, and complete skin survey by a dermatologist. All evaluations revealed no evidence of a primary extracranial or metastatic melanomatous lesion. After this workup, the patient was considered to have a primary malignant melanoma of the pineal gland.

Adjuvant RT was initiated 1 month after craniotomy. She received stereotactic intensity-modulated RT to the postoperative bed and residual gross tumor (Figure 2) to a prescribed dose of 54 Gy, delivered in 30 daily fractions of 1.8 Gy. An unplanned interruption in RT occurred for 9 days between fractions 9 and 10 due to epidural abscess with wound dehiscence, which was managed successfully with irrigation and debridement of the occipital wound and intravenous vancomycin and cefepime. She completed her remaining course of RT without issue. MRI performed after completion revealed an interval decrease in size of the residual postoperative enhancing lesion to 2.5 × 1.9 × 1.5 cm (Figure 1C).

On completion of RT, the patient was evaluated for systemic therapy options; after approximately 4 weeks, she started a course of pembrolizumab (2 mg/kg intravenously, every 3 weeks) because her tumor was significantly PD-L1–positive. Follow-up MRI 2 months after initiating immunotherapy revealed continued response to therapy and interval decrease in size of the pineal mass to 1.6 × 1.6 × 1.0 cm.

At the time of writing, the patient has completed 33 cycles of pembrolizumab without interruptions or complications. Her most recent brain MRI continued to show interval decreases in size, measuring 1.3 × 1.1 × 0.4 cm (Figure 1D). She is 138 weeks (>32 months) from initial presentation and 110 weeks from completion of RT (>27 months) without evidence of recurrent or progressive disease.

Clinically, the patient has had a good outcome. Her previously noted altered mental status, headaches, and fine coordination normalized shortly after surgery. Her gait instability showed gradual improvement over the course of RT and continued to improve while on immunotherapy. At the time of writing, she is able to ambulate with assistance from a wheeled-walker. The previously noted vertical gaze palsy and diplopia have been gradually improving in the past few years. Unfortunately, these issues persist, albeit to a lesser extent than at initial presentation. Although she has had no grade ≥2 adverse events while on pembrolizumab, she has experienced some minor grade 1 diarrhea, abdominal pain, and fatigue over her treatment course, but has not had any treatment interruptions.

Primary melanocytic neoplasms of the pineal gland have been shown to be highly aggressive, and limited data exist to guide treatment decisions. Previously published case reports suggest that this patient population may be best served by a combination of gross total resection (GTR) followed by RT and systemic therapy. Unfortunately, GTR is often technically challenging given the proximity of the pineal region to the vein of Galen and other critical structures in the midbrain and thalamus. In these cases, a subtotal resection (STR) of tumor is the maximum safe resection. Of the 10 patients reported to have undergone attempted surgical resection, only 2 have successfully achieved a GTR.1–10 Due to incomplete survival data in previously published literature, it is not possible to infer the benefit of GTR over STR in these patients. Previously published case reports pertinent to this discussion can be found in Table 1.1–17 Given the recent development of targeted and immunotherapeutic regimens, attempts at GTR should be tempered by maximal preservation of neurologic function. What does seem to be apparent is that STR without any adjuvant therapy is associated with a poor prognosis. There have been 16 cases presented in the literature that have undergone STR or biopsy, with survival follow-up data also reported.1–10,12–16 Among the 3 patients with STR who did not receive adjuvant therapy, the reported OS were 4, 5, and 12 weeks.7,12,17 Given this dismal prognosis, it seems prudent to strongly recommend adjuvant therapy after resection, particularly in the event of an STR. 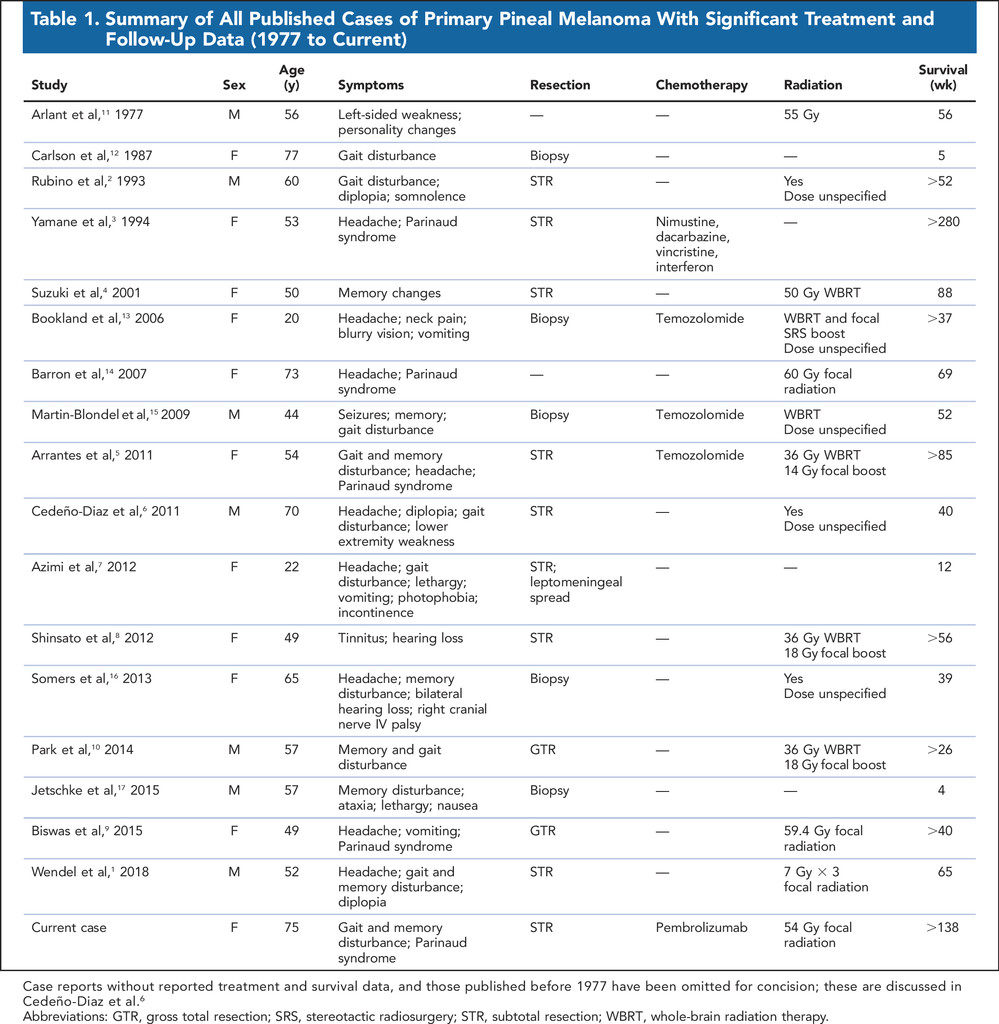 Adjuvant RT has been historically included as a mainstay of therapy for pineal melanoma, but the utility of whole-brain RT (WBRT) versus localized RT remains unknown. There have been 13 cases reported in the literature to have undergone adjuvant treatment after any surgical resection, and all but 1 have received radiation in some form.1–6,8–10,13–15,16 Radiation techniques in these series include WBRT, conventionally fractionated RT, SRS, or some combination of these. The data are not sufficiently robust to analyze differences between RT techniques. There have been 3 reported patients with leptomeningeal dissemination of disease, leading some oncologists to suggest a role for WBRT in an attempt to minimize this risk.7 Interestingly, these 3 patients were identified with leptomeningeal disease at presentation, and no other patient who presented with locally confined disease has been reported to experience recurrence with leptomeningeal dissemination despite many uses of localized RT techniques alone. The natural history of pineal melanoma clearly requires further study to appropriately comment on the utility of WBRT. We opted to administer locally directed RT to the pineal region in our patient, and have not seen leptomeningeal recurrence >32 months after completion of the radiation course.

The reported literature has been unclear regarding which systemic therapy is optimal in the adjuvant setting for pineal melanoma. Yamane et al3 reported mixed results with a combination of dacarbazine, nimustine, vincristine, and interferon. After undergoing a subtotal resection, their patient received adjuvant chemotherapy with 3 cycles of dacarbazine, vincristine, and nimustine, but experienced disease progression at 6 months within the surgical site.3 After recurrence, the patient was rechallenged with dacarbazine, nimustine, and vincristine with the addition of interferon, and achieved a clinical complete response for >4 years. There have been 3 other reported uses of systemic therapy, all implementing temozolomide, with mixed efficacy.4,5,13 The best response was described by Arantes et al,5 who reported on a patient with >85 weeks survival after treatment with combination temozolomide and RT following subtotal resection.

In our patient, we used molecular profiling (immunohistochemistry and next-generation sequencing) as a genetic screening tool, given her family history of male breast cancer and renal cell carcinoma, in addition to identifying any targetable mutations that could inform a systemic therapy decision. The patient’s genomic profile was largely negative for targetable mutations, whereas immunohistochemistry showed strongly positive PD-L1 expression of 2+ (70%). Given this insight, we were able to target PD-L1 with pembrolizumab, thus adding a new systemic therapy option to the literature, with excellent results providing proof of concept.

In addition to PD-L1, the patient’s tumor profile identified an interesting pathogenic somatic mutation in BAP1. Somatic BAP1 (BRCA1-associated protein) mutations have previously been identified as driver mutations in the pathogenesis of ocular melanomas, with roughly 40% of ocular melanoma carrying this driver mutation.18,19 Furthermore, somatic BAP1 mutations have been associated with more aggressive tumors and increased metastatic events in ocular melanomas.20 Although BAP1 mutations are rather prevalent and pathogenic in ocular melanoma, they are exceedingly rare in cutaneous melanomas and appear to be incompatible with cutaneous melanoma cell survival.18,19 Given these findings, it is possible that the presence of a somatic BAP1 mutation in our patient could effectively rule out a melanoma metastasis from a cutaneous primary and support the diagnosis of a primary pineal tumor given the common embryologic tissue development between the eye and the pineal gland. Although the incidence and implication of BAP1 mutations in primary pineal melanoma is unknown, it is an exciting marker for future studies and management strategies.

This is the first report of successful treatment of pineal melanoma using adjuvant fractionated RT and pembrolizumab immunotherapy, a treatment option suggested by next-generation genome sequencing analysis. Furthermore, this patient achieved the second longest OS reported using this combination (>138 weeks from diagnosis) and the longest reported progression-free survival. Although it is difficult to define the optimal management of primary pineal melanoma, it seems that this treatment strategy of maximal safe resection followed by focal radiation and adjuvant immunotherapy is both safe and effective. 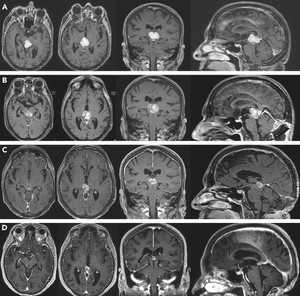