Search for other papers by Noam A. VanderWalde in
Current site
Google Scholar
PubMedClose
MD

Background: Chemotherapy with or without pelvic radiotherapy (RT) is included in the NCCN Clinical Practice Guidelines in Oncology (NCCN Guidelines) for metastatic anal cancer (MAC), despite limited clinical evidence for RT in this setting. In addition, increasing evidence shows that local therapies, including RT, may increase patient survival for some types of metastatic cancers. The purpose of this study was to evaluate the patterns of care and association between definitive pelvic RT and overall survival (OS) for patients with MAC. Methods: The National Cancer Database was analyzed to evaluate OS of patients with newly diagnosed MAC treated with chemotherapy with or without pelvic RT. Those who did not undergo treatment, treated with surgery, or without baseline variables were excluded. OS was analyzed using the Kaplan-Meier method, log-rank test, Cox proportional hazards models, and propensity score–matched analyses. Results: From 2004 through 2015, 437 patients received chemotherapy alone and 1,020 received pelvic chemoradiotherapy (CRT). At a median follow-up of 17.3 months, CRT was associated with improved OS on univariate (P<.001) and multivariate analysis (hazard ratio [HR], 0.70; 95% CI, 0.61–0.81; P<.001). Propensity score–matched analysis demonstrated superior median survival (21.3 vs 15.9 months) and 2-year OS rates (46% vs 34%) with CRT compared with chemotherapy alone (P<.001). Landmark analyses limited to long-term survivors of ≥1, ≥2, and ≥4 years showed improved OS with CRT in all subsets (all P<.05). CRT with therapeutic doses (≥45 Gy) was associated with longer median survival than palliative doses (<45 Gy) and chemotherapy alone (24.9 vs 10.9 vs 15.6 months, respectively; P<.001). The benefit of CRT was present among not only those with distant lymph node metastasis (HR, 0.63; P=.04) but also those with distant organ disease (HR, 0.74; P<.001). Conclusions: In this large hypothesis-generating analysis, patients with newly diagnosed MAC who received definitive pelvic RT with chemotherapy lived significantly longer than those who received chemotherapy alone. Prospective trials evaluating definitive local RT for MAC are warranted.

Because the literature on the potential benefit of definitive RT to the primary tumor in MAC is unclear, we analyzed the National Cancer Database (NCDB) to assess patterns of care and survival outcomes of chemotherapy with or without RT in patients with MAC. We hypothesized that patients who received definitive doses of pelvic RT for MAC would have improved survival compared with those who did not.

The NCDB is a hospital-based cancer registry maintained by both the Commission on Cancer of the American College of Surgeons and the American Cancer Society.20 It includes approximately 70% of cancers diagnosed in the United States. The NCDB was used to retrospectively assess the patterns of care for patients with newly diagnosed MAC from 2004 through 2015. Survival was compared between patients who received pelvic CRT and those who received chemotherapy alone.

Eligibility criteria included patients aged ≥18 years with newly diagnosed, histologically confirmed, metastatic squamous cell carcinoma of the anus treated with upfront chemotherapy (supplemental eFigure 1, available with this article at JNCCN.org). Patients who received no treatments, whose treatment was unknown, who received RT alone or surgery, and who were missing baseline variables or follow-up information were excluded. Patients receiving external-beam RT to the pelvis were considered to be in the CRT group, although those who received brachytherapy were excluded. To minimize the heterogeneity of therapies, patients who received RT to distant nonprimary sites were excluded. Treatment coding in the NCDB is limited to the first course of treatment, defined as all methods of therapy recorded in the treatment plan and administered to the patient before disease progression or recurrence. Data regarding specific agents of chemotherapy administered are not available in the NCDB.

The primary objective of analysis was the comparison of overall survival (OS) for MAC treated with chemotherapy with and without pelvic RT. OS was estimated using the Kaplan-Meier method, and univariate comparisons were performed using the log-rank test and unadjusted Cox models. Multivariate Cox models were adjusted for factors including RT, age, year of diagnosis, race, comorbidity score, tumor grade, clinical tumor (T) stage, clinical nodal (N) stage, treating facility, insurance status, and metastatic site (distant lymph node, distant organ, or both). Proportional hazards assumption was assessed for all covariates and returned no significant results. Median follow-up was evaluated using the reverse Kaplan-Meier method. Baseline characteristics were compared using the chi-square test for categorical variables; the Mann-Whitney U and Kruskal-Wallis nonparametric tests were used for non-normally distributed variables of 2 and >2 groups, respectively.

To account for potential bias favoring administration of pelvic RT to patients with more favorable baseline prognoses (immortal time bias), sequential landmark analyses evaluating survival with and without pelvic RT were performed for patients surviving a minimum of ≥1, ≥2, and ≥4 years from diagnosis.22 Subgroup multivariate Cox regression analyses evaluating the impact of pelvic RT were performed for 6 covariates, including age, race, comorbidity score, T stage, N stage, and metastatic site. To further test the role of pelvic RT on patient survival, secondary analysis was performed based on RT dose (total dose ≥45 vs <45 Gy).

To rule out the selection bias in which RT was selectively delivered to patients who received chemotherapy first and had good response, we investigated patients who received RT by CRT sequence (concurrent vs non-concurrent CRT; see definitions in supplemental eAppendix 1). All statistical analyses were performed using SAS 9.4 (SAS Institute).

A total of 1,457 patients met our inclusion criteria. Table 1 demonstrates the baseline treatment characteristics between those who received chemotherapy alone and those who received pelvic CRT. More patients received pelvic CRT (n=1,020; 70%) than chemotherapy alone (n=437; 30%). Patient characteristics were well-balanced for age, race, and Charlson/Deyo comorbidity score between the groups. The use of CRT was associated with earlier year of diagnosis, female sex, higher T and N stage, metastases to distant lymph node only, community treatment facility, and nonprivate insurance (Table 1). 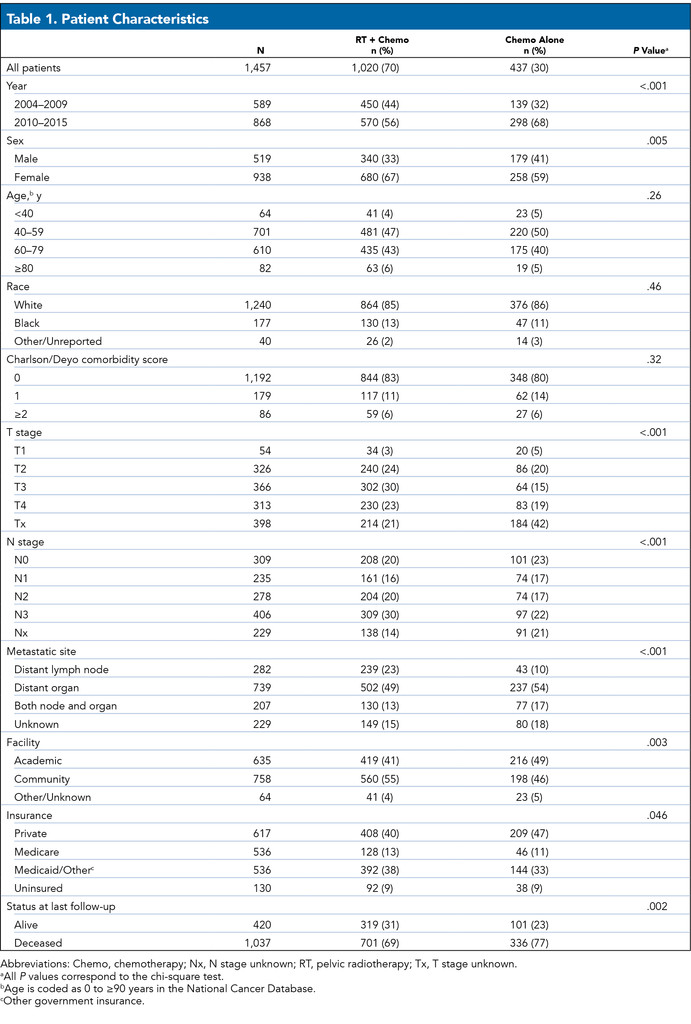 of ≥1, ≥2, and ≥4 years (Figure 2 and supplemental eTable 2; all P<.05). Similar analyses for PSM patients also demonstrated this association at each sequential landmark (supplemental eFigure 2). 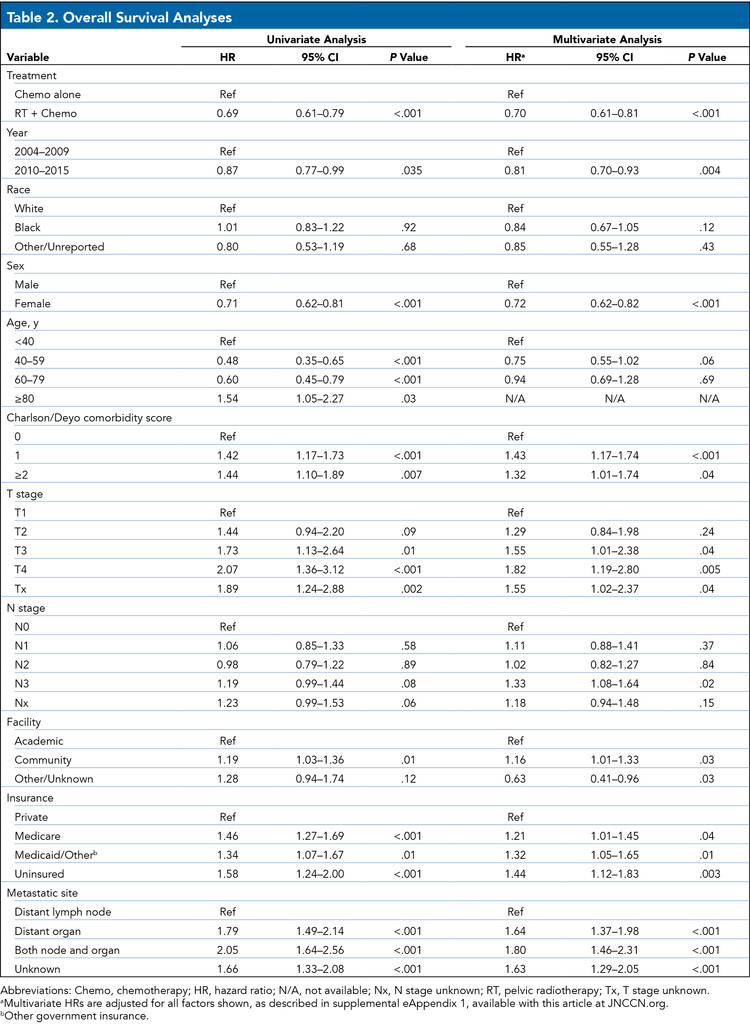 In this hypothesis-generating analysis, patients with newly diagnosed MAC who received pelvic CRT had improved median, 2-year, and 5-year OS compared with those receiving chemotherapy alone. The benefit of definitive pelvic RT was present among not only those with distant lymph node metastasis (HR, 0.63; P=.04) but also those with distant organ disease (HR, 0.74; P<.001). The biases in this study were controlled by several methods, including univariate/multivariate analyses and PSM analysis. Disease burden was controlled by T/N stage for the primary tumor and by metastatic sites for distant disease (distant node only, distant organ only, or both). To account for potential selection biases between “responder” and “nonresponder” (ie, immortal time bias), sequential landmark analyses showed significant improvement in survival with RT for long-term survivors of ≥1, ≥2, and ≥4 years, suggesting that the benefit of pelvic RT found in this study is not just due to bias. Lastly, by using the time of treatment initiation (chemotherapy or RT), we found that 78% of patients treated with CRT received concurrent CRT and had slightly better survival than those treated with nonconcurrent CRT, which helped rule out the selection bias that RT was selectively delivered to patients who received chemotherapy first and had good response.

In a separate analysis, patients who received RT treatments to distant nonprimary sites were also included (n=74). Inclusion of these additional patients did not affect our conclusion either in the analysis of all patients and or in the PSM analysis (supplemental eFigure 3).

Data regarding local therapy for MAC are limited in the literature. To our knowledge, this analysis represents the largest reported cohort of patients with MAC treated with external-beam RT, as well as the largest MAC cohort managed with local therapy (RT or surgery) overall. Recently, an analysis using the NCDB for patients diagnosed from 2004 through 2013 showed an association of pelvic RT with improved survival.23 However, our analyses used more comprehensive and robust statistical methods, which had better control of biases (univariate/multivariate analyses, PSM, landmark analysis, subgroup analysis, and analysis by sequence of treatments) and provided evidence that definitive pelvic RT was associated with improved OS based on survival analysis stratified by radiation dose (total dose ≥45 vs <45 Gy). In a retrospective study, Eng et al24 showed that survival for 33 patients who underwent multidisciplinary intervention (surgery, RT, or ablation) and chemotherapy was improved compared with patients treated with chemotherapy alone. In another retrospective study, Faivre et al6 found that 10 patients who received local therapy with chemotherapy lived longer than those treated with chemotherapy alone.

How definitive local RT may improve survival for patients with MAC is not clear. There are several possible explanations. First, most patients with MAC would experience locoregional symptoms of pain, bleeding, or obstruction due to locoregional invasion of the tumor. These symptoms could ultimately lead to life-threatening complications, including obstructions and infections that impact life expectancy. Of note, as shown in the survival analysis by dose (Figure 4 and supplemental eTable 4), patients who required palliative RT had worse 2-year OS (25%) than those who received chemotherapy alone (34%), but survival for patients who received definitive RT (52%) was much better. Normally, palliative RT is delivered to patients with severe complications, and these patients may have worse disease than those not requiring palliative RT, leading to worse survival compared with those receiving chemotherapy alone. However, upfront definitive pelvic RT could potentially prevent these problems and therefore extend survival.

Second, the seed-and-soil theory provides a biologic rationale for definitive RT of the primary tumor in patients with newly diagnosed MAC.25–27 According to this theory, soluble growth factors produced by the primary tumor are required to create a microenvironment that promotes dissemination of malignant clones and formation of metastasis.28,29 Consequently, eradication of the primary tumor through definitive RT would decrease the spread of malignant clones and subsequently decrease the formation of further metastasis. Of note, in subgroup analyses (Figure 3), we found that higher T stage (T3–4 vs T1–2) was associated with worse survival. T3–4 tumors had larger primary tumors (vs T1–2) and were less likely to be eradicated by RT, leading to worse survival. This result suggested that control of the primary tumor may play an important role in newly diagnosed MAC.

This study has several limitations. Information on specific chemotherapy agents, salvage therapies, and patient HIV and human papillomavirus status (which have been shown to correlate with patient survival41,42) is not available in the NCDB, and these 4 variables were not controlled in our study. Immortal time bias (ie, patients who died before they could receive RT) and selection bias (ie, RT selectively delivered to patients who received chemotherapy first and had good response) may also impact the results of this study. We tried to account for these potential biases through landmark analyses and survival analysis for concurrent versus nonconcurrent CRT. Although comorbidity was estimated using Charlson/Deyo comorbidity index, that is not a good surrogate for performance status, which is not available in NCDB. Finally, treatment-related toxicity, colostomy-free survival, and disease-specific survival are not coded in NCDB. Despite these limitations, the results of this analysis are intriguing.

In this large hypothesis-generating analysis, patients with newly diagnosed MAC who received definitive pelvic RT with chemotherapy lived significantly longer than those who received chemotherapy alone. Although optimal patient selection remains uncertain, we observed a benefit across virtually all subgroups of patients. Randomized trials to evaluate the impact of definitive local RT for patients with newly diagnosed MAC appear warranted.

Disclosures: Dr. Ballo has disclosed that he is a member of the speakers bureau and serves as a consultant for Novocure. The remaining authors have disclosed that they have not received any financial considerations from any person or organization to support the preparation, analysis, results, or discussion of this article.

Forest plot of the association between pelvic RT and overall survival by subgroup.

Overall survival analyses by radiation dose (<45 and ≥45 Gy) and CRT sequence (concurrent vs nonconcurrent). Multivariate analyses were adjusted for identical factors to the primary analysis, as described in supplemental eAppendix 1. (A) All patients with dose information (n=1,386). (B) Propensity score–matched patients with dose information (n=772). (C) Analysis of all patients by CRT sequence (n=1,457). 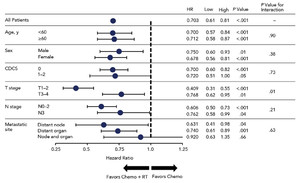