Chronic lymphocytic leukemia (CLL) is generally characterized by an indolent disease course. Histologic transformation (also known as Richter's transformation) to more aggressive lymphomas, such as diffuse large B-cell lymphoma or Hodgkin lymphoma, occurs in approximately 2% to 10% of patients and is associated with a poor prognosis. These NCCN Guidelines Insights discuss the recommendations for the diagnosis and management of patients with histologic transformation.

Target Audience: This activity is designed to meet the educational needs of physicians, nurses, pharmacists, and other healthcare professionals who manage patients with cancer.

Medicine (ACCME): NCCN designates this journal-based CME activity for a maximum of 1.0 AMA PRA Category 1 Credit™. Physicians should claim only the credit commensurate with the extent of their participation in the activity.

Nursing (ANCC): NCCN designates this educational activity for a maximum of 1.0 contact hour.

All clinicians completing this activity will be issued a certificate of participation. To participate in this journal CE activity: (1) review the educational content; (2) take the posttest with a 66% minimum passing score and complete the evaluation at https://education.nccn.org/node/84832; and (3) view/print certificate.

Pharmacists: You must complete the posttest and evaluation within 30 days of the activity. Continuing pharmacy education credit is reported to the CPE Monitor once you have completed the posttest and evaluation and claimed your credits. Before completing these requirements, be sure your NCCN profile has been updated with your NAPB e-profile ID and date of birth. Your credit cannot be reported without this information. If you have any questions, please e-mail education@nccn.org.

The NCCN staff listed below discloses no relevant financial relationships:

John C. Byrd, MD, Panel Vice Chair, has disclosed that he has no relevant financial relationships.

Sami Malek, MD, Panel Member, has disclosed that he has equity interest/stock options in AbbVie, Inc., Gilead Sciences, Inc., and Portola Pharmaceuticals; and that he receives grant/research support from Janssen Pharmaceutica Products, LP, and Pharmacyclics, Inc.

Deborah Stephens, DO, Panel Member, has disclosed that she has no relevant financial relationships.

Mary A. Dwyer, MS, CGC, Senior Manager, Guidelines, NCCN, has disclosed that she has no relevant financial relationships.

Chronic lymphocytic leukemia (CLL)/small lymphocytic lymphoma (SLL) constitutes approximately 7% of newly diagnosed cases of non-Hodgkin's lymphoma.1 CLL remains the most prevalent adult leukemia in Western countries. In 2018, an estimated 20,940 people were diagnosed with CLL and an estimated 4,510 people died of the disease in the United States.2 CLL is generally characterized by an indolent disease course. Histologic transformation (also known as Richter's transformation) to more aggressive lymphomas, such as diffuse large B-cell lymphoma (DLBCL) or Hodgkin lymphoma (HL), occurs in approximately 2% to 10% of patients during the course of their disease and treatment.3–5 Unlike CLL, clinical outcomes in patients with histologic transformation are exceedingly poor, with a pattern of no to minimal response to chemoimmunotherapy regimens and a median survival of 5 to 8 months.6

The exact mechanism of Richter's transformation is not well understood; however, it has been associated with molecular characteristics of the patients' CLL and their prior CLL-directed therapies. Molecular characteristics that have been associated with risk of developing Richter's transformation and that may be linked to the pathogenesis of the disease include7–14:

However, none of these markers is sufficiently predictive to allow for individualized risk prediction.

resistance to BTK and PLCG2 mutations.16 Although the rate of transformation during venetoclax therapy was significantly higher among patients with heavily pretreated del(17p) CLL, it was less common among a broader group of patients with less heavily pretreated relapsed/refractory CLL.17 Further study is needed to determine the exact risk profile and mechanism of Richter's transformation.

CLL with expanded proliferation centers (accelerated CLL) may be diagnosed when proliferation centers in CLL are expanded or fuse together and show a high Ki-67 proliferative rate (>40%). Progression to CLL with increased prolymphocytes (CLL-PLL) may occur when there are increased prolymphocytes in the blood (>10% to <55%). Neither of these findings are considered to be Richter's transformation, but rather progression of CLL, associated with a more aggressive disease course.18

cells in a background of CLL may progress to classical HL in some patients.26 Biopsy specimen should be evaluated for EBV infection using latent membrane protein 1 (LMP1) staining or in situ hybridization of EBV-encoded RNA (EBER-ISH).

DLBCL arising from CLL can either be clonally unrelated (21%) or clonally related (79%) to CLL.8 Richter's transformation to clonally unrelated DLBCL is characterized by a significantly lower prevalence of TP53 mutations/deletions and a significantly longer median survival than clonally related DLBCL (62 vs 14 months).8 Most patients with Richter's transformation to clonally related DLBCL carry unmutated IGHV.27 Molecular analysis is useful to establish the clonal relationship between baseline CLL tumor cells and histologically transformed tumor cells (see HT-1, page 14). IGHV gene sequencing or clonal IGHV rearrangements can be used to establish the clonal relationship between CLL and histologically transformed tumor cells.8,27

Richter's transformation to clonally unrelated DLBCL should be managed similar to de novo DLBCL, as outlined in the NCCN Guidelines for B-Cell Lymphomas (available at NCCN.org).

For Richter's transformation to clonally related (or unknown clonal status) DLBCL, enrollment in a clinical trial is the preferred initial treatment option (see HT-3, above). In the absence of a suitable clinical trial, chemoimmunotherapy regimens recommended for DLBCL can be used; however, these regimens typically result in poor responses.6 Elevated platelet counts, higher hemoglobin levels, lower beta-2-microglobulin levels and lower lactate dehydrogenase levels have been identified as independent predictors of higher response rates to chemoimmunotherapy.6 However, the use of these prognostic variables for selection of therapy for Richter's transformation has not yet been established. Evidence (mostly from single-arm phase I/II studies) to support the use of chemoimmunotherapy regimens for DLBCL arising from CLL are discussed further and are also summarized in Table 1.

In a phase II trial conducted by the German CLL Study Group that included 15 patients with Richter's transformation, R-CHOP (rituximab/cyclophosphamide/doxorubicin/vincristine/prednisone), resulted in an overall response rate (ORR) of 67% (7% complete response

[CR]).28 After a median follow-up of 69 months, the median progression-free survival (PFS) and overall survival (OS) were 10 and 21 months, respectively. Hematologic toxicities and infections were the most common adverse events.

In a single-institution retrospective cohort study of 46 patients with Richter's transformation treated with R-EPOCH (rituximab/etoposide/prednisone/vincristine/cyclophosphamide/doxorubicin), the ORR was 39% (17 of the 44 patients evaluable for treatment response).29 After a median follow-up of 39 months, median PFS and OS were 4 and 6 months, respectively. Complex karyotype was associated with significantly shorter PFS and OS. The estimated 1-year OS rate was 71% for patients without a complex karyotype.

The modified R-hyperCVAD regimen (rituximab/cyclophosphamide/vincristine/liposomal daunorubicin/dexamethasone alternating with methotrexate + cytarabine) with growth factor support was also active in patients with Richter's transformation (n=30), resulting in an ORR of 43% (27% CR), and the 1-year OS rate was 28%.30 However, it was associated with significant toxicity (grade 3 neutropenia was the most common hematologic toxicity) and was not more effective than an alternate hyperCVAD regimen (did not include methotrexate, cytarabine, rituximab, or growth factor support) that was evaluated in an earlier study.31

The OFAR regimen (oxaliplatin/fludarabine/cytarabine/rituximab) at different dosing schedules has also been evaluated in patients with Richter's transformation. In a phase I/II trial that included 20 patients with Richter's transformation, OFAR (with increasing doses) resulted in an ORR of 50%.32 The median response duration was 10 months. After a median follow-up of 9 months, the 6-month OS rate was 53% and the survival rate was higher for patients achieving CR or partial response (PR). A modified OFAR regimen with reduced-dose cytarabine resulted in an ORR of 39% (7% CR), in a phase I/II study that included 35 patients with Richter's transformation. With a median follow-up of 26 months, median survival was 7 months and the 2-year OS rate was 20%.33 Grade 3/4 neutropenia and thrombocytopenia were the most common hematologic toxicities, occurring in 80% of patients, with both schedules of the OFAR regimen.

R-CHOP, R-EPOCH, R-hyperCVAD, and OFAR are included as options for chemoimmunotherapy, based on available data from clinical trials discussed earlier (see HT-3, opposite page).

Allogeneic hematopoietic cell transplant (alloHCT) can be considered for patients with disease responding to initial chemoimmunotherapy.6,34,35 In a nonrandomized comparative analysis, the estimated cumulative 3-year survival rate was significantly higher (75%) for patients who underwent alloHCT after achieving a CR or PR to initial therapy compared with those who responded to initial therapy but did not undergo alloHCT, or who underwent alloHCT for relapsed or refractory Richter's transformation (75% vs 27% and 21%, respectively; P=.019).6 In a retrospective analysis that evaluated the outcome after autologous HCT or alloHCT in 59 patients with Richter's transformation, the 3-year estimated OS, relapse-free survival, and cumulative incidences of relapse and nonrelapse mortality rates were 36%, 27%, 47%, and 26%, respectively, for alloHCT, and 59%, 45%, 43%, and 12%, respectively, for autologous HCT.34 In a multivariate analysis, chemotherapy-sensitive disease and reduced-intensity conditioning were found to be associated with superior relapse-free survival after alloHCT. Autologous HCT may also be appropriate for patients with disease responding to initial therapy but are not candidates for alloHCT due to age, comorbidities, or lack of a suitable donor.34

Nivolumab and pembrolizumab with or without ibrutinib is included as an option with a category 2B recommendation for patients unable to receive chemoimmunotherapy, with del(17p) or TP53 mutation, or with chemoimmunotherapy-refractory disease (see HT-3, page 16).

To participate in this journal CE activity, go to https://education.nccn.org/node/84832.

The NCCN Clinical Practice Guidelines in Oncology (NCCN Guidelines®) are a statement of evidence and consensus of the authors regarding their views of currently accepted approaches to treatment. The NCCN Guidelines Insights highlight important changes in the NCCN Guidelines recommendations from previous versions. Colored markings in the algorithm show changes and the discussion aims to further the understanding of these changes by summarizing salient portions of the panel's discussion, including the literature reviewed.

The complete and most recent of these NCCN Guidelines is available free of charge at NCCN.org.

© National Comprehensive Cancer Network, Inc. 2019. All rights reserved. The NCCN Guidelines and the illustrations herein may not be reproduced in any form without the express written permission of NCCN. 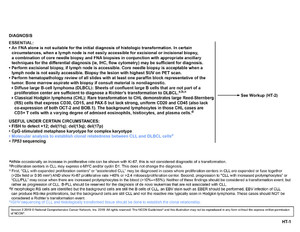 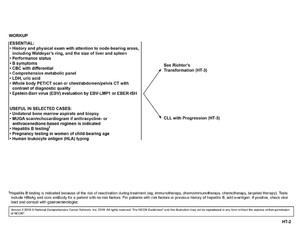 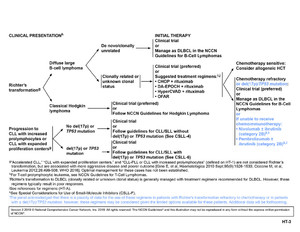 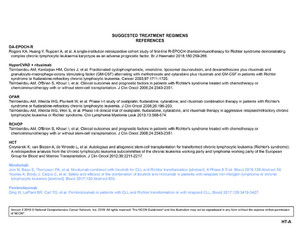