Colorectal cancer (CRC) is a frequently diagnosed cancer for which surgery has a crucial role in treatment. Unfortunately, surgery also carries considerable risks of postoperative complications and mortality.1,2 There are indications that these risks might be higher in surgeries performed during the weekend compared with weekdays: the so-called weekend effect. To date, a small number of studies have investigated the weekend effect in colorectal surgery.3–8 However, these studies grouped colon and rectal surgeries together3,4 or only examined colon surgery,5,6 whereas patient characteristics, complication risks, and clinical outcomes are clearly different for colon and rectal cancers.9

Another important limitation of most previous studies on the weekend effect, regardless of the diagnosis, is the use of administrative data. Administrative data can reflect inaccurate coding,10 but also often lack necessary information to adjust for the different case-mix using clinical variables.11,12 As a result, whether the weekend effect is merely a product of the selection of worst cases presenting during the weekend or is caused by other factors related to the quality of care delivered on weekends remains unclear. However, when restricting to emergency cases, such selection is less likely to occur on weekends and not (during out-of-office hours) on weekdays. Due to these matters, there is an increasing demand for population-based data from clinical audits because these may provide the necessary clinical data for case-mix adjustment. The Dutch ColoRectal Audit (DCRA), previously known as the Dutch Surgical Colorectal Audit, is a nationwide clinical audit in the Netherlands with the objective to measure and improve quality of CRC surgery. It registers detailed clinical data to enable case-mix adjustment to make valid comparisons of outcomes of different providers.13

The aim of the current study, therefore, was to investigate whether there is a weekend effect after emergency colon and rectal cancer surgery using data from the DCRA.

Data were prospectively collected from the DCRA, a nationwide quality improvement audit initiated in 2009. All Dutch hospitals (n=88) performing CRC surgery participate in the DCRA. The DCRA is a disease-specific audit and contains a wide range of variables with specific information regarding patient and tumor characteristics, diagnostics, treatment, complications, and mortality. A more detailed description of the DCRA is published elsewhere.13,14

All nonelective patients (n=5,246) registered in the DCRA for surgical resection of primary CRC in the period from 2012 until 2015 were included. Patients with synchronous tumors, treated with the “wait-and-see” approach, who underwent procedures solely performed through transanal endoscopic microsurgery, and without information on date of surgery, mortality, or location of the primary tumor were excluded (n=22). Elective resections were excluded because weekend elective surgery is not common practice in the Netherlands, and therefore any surgeries performed during the weekend were likely to be a specific selection of patients giving rise to treatment by indication bias. The study protocol was presented to the Medical Ethical Committee of the Leiden University Medical Center, which declared that no ethical approval was necessary for this type of study under Dutch law and waived the need for informed written consent from patients (P16.243).

Case-mix variables used to adjust outcomes for both colon and rectal cancer surgery were age, sex, body mass index, Charlson comorbidity index, American Society of Anesthesiologists classification score, presence of metastasis, preoperative complications, and additional resection for metastasis or locally advanced tumor. Specific for colon cancer, the pathologic tumor stage and location of the primary tumor were added to the case-mix variables, and specific for rectal cancer, the clinical tumor stage, type of surgery (low anterior resection or abdominal perineal resection), and neoadjuvant therapy (short-course radiotherapy or chemoradiotherapy) were added. These case-mix variables have been previously identified as relevant for patient outcome and hospital comparisons, and are thus part of the standard DCRA case-mix models.14

First, patient characteristics were compared between weekend and weekday surgery, separately for colon and rectal cancer, using chi-square tests. Subsequently, logistic regression was used to examine whether unadjusted and adjusted outcome rates differed between weekend and weekday surgery. Monday was used as reference category. Analyses were adjusted for the case-mix variables. Goodness of fit of the adjusted models was assessed using C-statistics by calculating the area under the receiver operating characteristics curve. Results were considered statistically significant at P<.05. Statistical analyses were performed using SPSS version 23 (IBM Corporation).

In emergency colon cancer surgery (Table 2), the highest mortality, severe complication, and FTR rates were found for weekend surgeries (9.9%, 31.8%, and 31.1%, respectively). After adjustment for case-mix, weekend surgeries had 66% higher mortality and 29% higher severe complication rates compared with Monday surgeries (Table 2). Estimates for FTR were in the same direction but not statistically significant, which is likely due to the smaller sample size as only complicated cases are included.

In emergency rectal cancer surgery, the highest mortality, severe complication, and FTR rates were found for weekend surgeries (18.2%, 45.5%, and 40.0%, respectively). However, no significant differences were found for weekend surgeries after adjustment for case-mix, even though estimates went in the same direction as for colon cancer surgery, likely caused by the small numbers (Table 2).

As a post hoc analysis, we explored whether ostomies or anastomoses were more often performed during weekend or weekday surgery, because this may indicate either a different patient population not accounted for by case-mix correction and/or a difference in experience of the surgeon performing the surgery, and thereby suggest possible explanatory or mediating factors. For emergency colon cancer surgery, more ostomies were created on the weekend than on weekdays (43.6% vs 38.8%; P=.018). During weekdays, the percentage of anastomoses was higher compared with the weekend (55.6% vs 50.1%; P=.018). Including this as an additional variable (ostomy, anastomosis, or both) in the multivariate analyses, with having both an ostomy and anastomosis as the reference category, resulted in the FTR rate being significantly higher after emergency weekend colon cancer surgeries (OR, 1.66; 95% CI, 1.04–2.66). 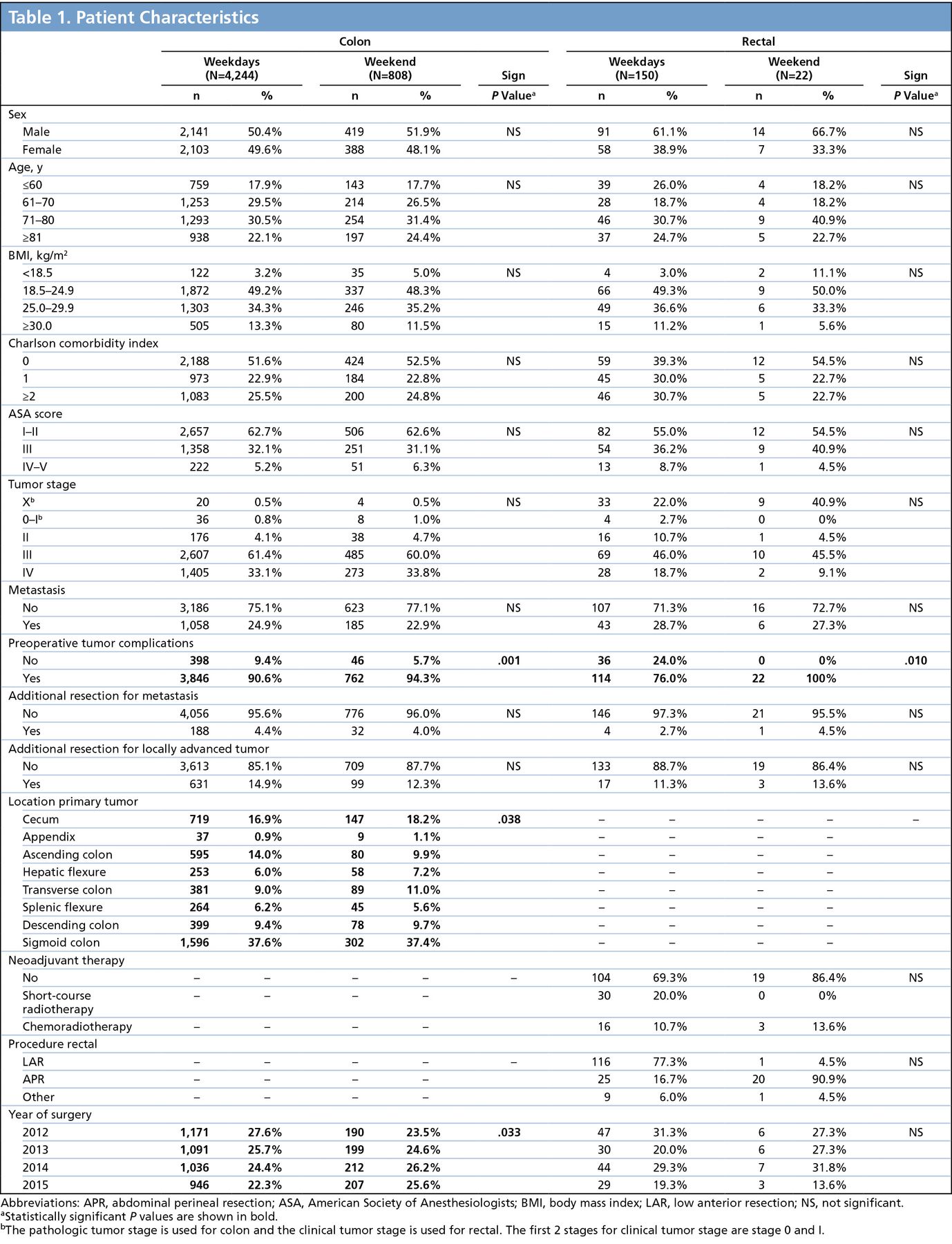 The present study has shown higher mortality and severe complication rates after emergency colon cancer surgery performed during the weekend. Estimates for FTR and emergency rectum cancer surgery were in the same direction but not statistically significant, likely explained by the small sample size. By separating colon and rectal cancer, we believe that our results provide a more complete picture of the occurrence of a weekend effect in colorectal surgery and a better starting point for further research into explanatory factors and quality improvement initiatives.

Given the worse outcomes seen after emergency colon cancer surgery during weekends, it is important to better understand the complex mechanism that may result in the observed weekend effect. Because the weekend effect also remained after case-mix adjustment using clinical variables, we eliminated the possibility that the effect might be caused by a case-mix selection, making differences in organization of perioperative care during weekends seem more likely. In an attempt to gain more insight into this mechanism, we explored whether having an anastomosis or an ostomy might be an explanatory or mediating factor, indicating either a specific patient group not accounted for in case-mix adjustment and/or a less experienced surgical team. It can be argued that ostomies are less risky to perform and therefore more preferred among less specialized surgeons who might be on call on some weekends. However, the decision-making around ostomies and anastomoses is influenced by many other factors, with the condition of the patient being the most important, which might explain the increased FTR rate when this factor was included in the analysis. Therefore, it seems far more likely that this effect is the result of a complex combination of surgeon specialization and patient condition, requiring more research into the mechanism behind the observed weekend effect.

Future studies should shift the focus toward possible explanatory factors, such as organization of care during the weekends compared with weekdays—not only whether the perioperative period is in the 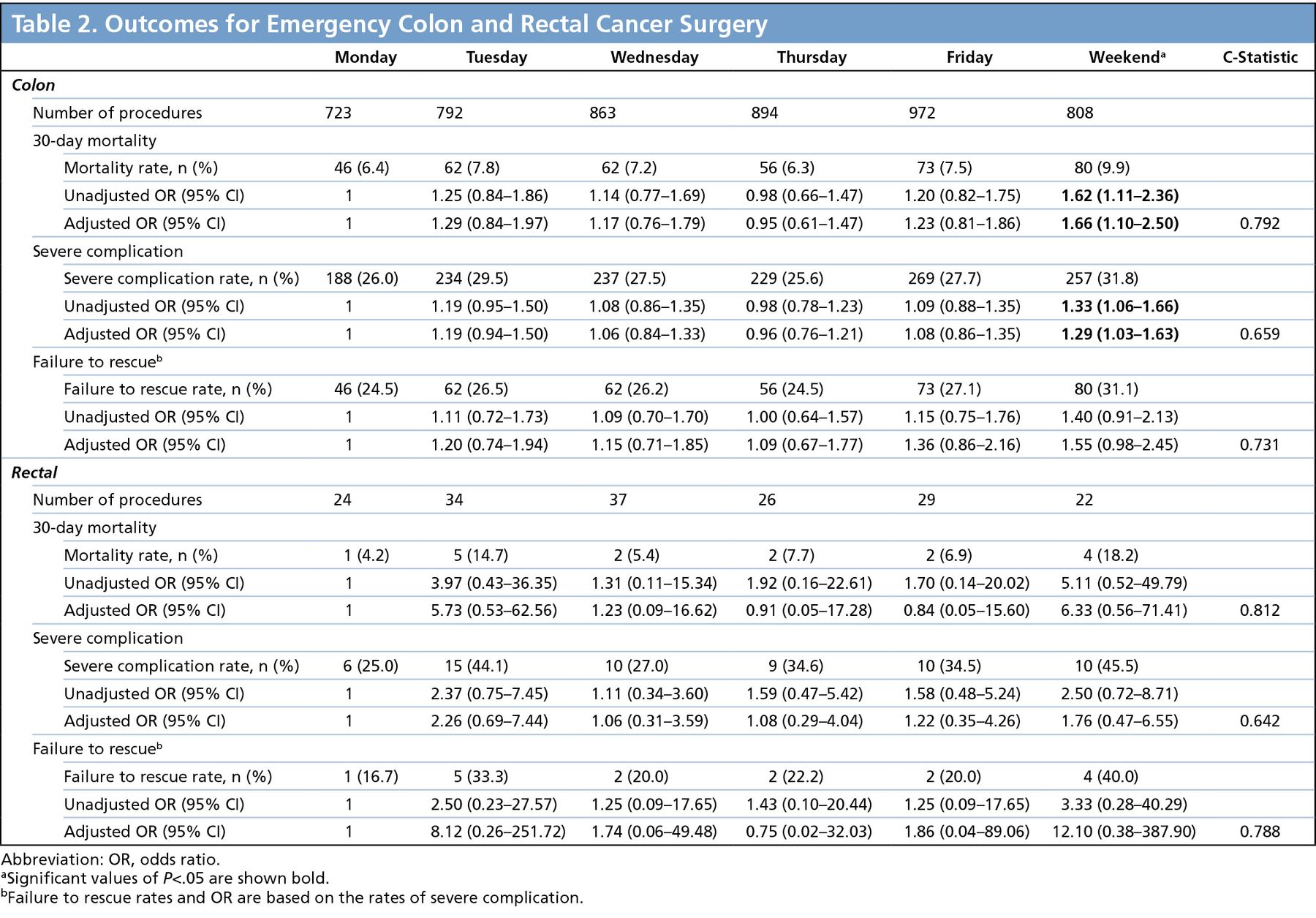 weekend but also whether care given in the postoperative period is during the weekend. Factors suggested to explain the weekend effect are less (experienced) hospital staff and resources available during the weekends.18 This would suggest a broader focus, because it should also include delay in diagnosing complications and performing reinterventions, rather than only focusing on the initial operation being performed in the weekend. For instance, an anastomotic leakage, a common serious complication in colorectal surgery, is typically diagnosed between 5 and 8 days after surgery,19 so when this occurs during a weekend, it may result in higher FTR rates if not detected early enough, even though the primary surgery was performed on Monday or Tuesday. This will only be detected when looking specifically at delay during weekends in diagnosing complications and/or performing reinterventions during weekends. One study, with a relatively small study population, observed intervening weekends to be a risk factor for delay in diagnosing anastomotic leakage and, subsequently, relaparotomy.20 In addition, a study into hospital characteristics and the effect on FTR following major surgery suggested that microsystem characteristics are likely to be more important in managing postoperative complications, because only part of the variability between low- and high-mortality hospitals could be explained by macrosystem factors such as hospital size.21 Therefore, it might be far more complicated than simply having specialized surgeons on call 24 hours a day or more beds available, but rather could be an interplay between availability of diagnostics, sufficient and experienced staff at the wards with the ability to recognize early signs of complications, and quick surgical interventions by specialized surgeons if needed.

This study has some limitations, one of which is that no information was available regarding out-of-hospital deaths occurring >30 days after surgery. However, for this to influence our results, the out-of-hospital deaths should have followed a different pattern than the included 30-day mortality, which does not seem likely. Another limitation may be our lack of information on day of admission, making it possible that weekend surgeries are represented by the worst cases and that other slightly less emergent surgeries are postponed to Monday. This might suggest an overestimation of the weekend effect we found. Use of the DCRA in the current study could be considered a strength, particularly because of the available clinical variables in contrast to previous studies that mostly used administrative data. Previous studies often report that they were unable to fully adjust for the different patient characteristics because of the lack of clinical data indicating a different case-mix in weekends.18 Our results still show differences after adjusting for a broad scale of these clinical case-mix variables, indicating that the weekend effect found in this study may possibly be due to a variation in care instead of a selection effect.

The current study demonstrated worse patient outcomes after emergency colon cancer surgery performed on weekends, reflecting a weekend effect. Future studies should examine explanatory factors, including differences in quality of care during weekends compared with weekdays in terms of diagnostic availability, surgical experience, and postoperative care that may affect the detection of early signs of complications.