Despite the importance of distant metastatic disease in pancreatic cancer, the local pancreatic tumor deserves attention. Historical data describing the natural history of pancreatic cancer attribute mortality largely to systemic insults such as organ failure, thromboembolic disease, and cachexia.5 However, more recent data implicate local tumor progression as an important cause of mortality. Iacobuzio-Donahue et al6 performed rapid autopsies on 76 patients who died of pancreatic cancer and found that locally destructive disease was the cause of death in nearly one-third (30%). This autopsy study helped define the link between disease progression and mortality; however, the relationship between disease progression and the corresponding clinical implications on patient quality of life (QoL) remains less well studied.

Institutional Review Board approval for this study was obtained prior to data collection. Records of 298 consecutive patients treated for pancreatic cancer at a single academic institution from 2004 through 2015 were retrospectively reviewed. Available medical records, pathology, and radiology reports were reviewed in entirety, with a focus on defining the symptom burden that patients experience with disease progression. We collected baseline demographic information and information on tumor characteristics and staging at diagnosis. Patients were classified as having resectable, unresectable, or metastatic disease at diagnosis. The resectable group included patients who underwent definitive surgery including a pancreaticoduodenectomy, distal pancreatectomy, or total pancreatectomy. The unresectable group included patients without metastatic disease at presentation who had pancreatic tumors not amenable to resection, or had surgically resectable disease but did not have surgery due to medical comorbidity or patient preference.

Disease-related hospitalizations were classified by physician review as secondary to either local pancreatic tumor progression or distant disease progression. Hospitalization for local progression included indications such as extrahepatic biliary obstruction/cholangitis, gastrointestinal bleed/obstruction, and pain attributable to the primary pancreatic tumor. Hospitalization for distant progression included thromboembolic events, sepsis, and distant organ failure related to distant metastases. Certain diagnoses (ie, thromboembolic disease, sepsis) can clinically be related to either local primary tumor or distant/systemic disease, and were sorted by careful chart review. For example, hospitalization for sepsis in the setting of biliary obstruction/cholangitis was attributed to local disease progression, whereas thromboembolism in the setting of limited/resected primary tumor but widespread metastases was attributed to distant disease. For patients with both a locally advanced primary tumor and significant distant metastatic disease burden, hospitalizations were attributed to distant disease progression. When possible, we determined the circumstances of patient death in regard to cause of death, location, and whether the patient had been enrolled into hospice.

Competing risk analyses were used to estimate the incidence of hospitalization reported 12 months from diagnosis. In these analyses, hospitalization was the event of interest, whereas death was considered a competing event. A multivariable Fine-Gray regression model was used to identify factors predictive of hospitalization for complications due to local tumor progression, and included available demographic and clinical variables that could potentially influence the risk of hospitalization (age at diagnosis, primary tumor size and location, race, ethnicity, sex, disease stage at diagnosis, and history of primary tumor irradiation). Variables in the multivariable analyses were chosen a priori and all variables were retained in the multivariable models regardless of significance on univariable analysis; P<.05 was considered statistically significant. All analyses were completed using SAS 9.4 (SAS Institute Inc.).

A total of 298 consecutive patients with pancreatic adenocarcinoma were included in this study, with patient characteristics detailed in Table 1. The median follow-up for the entire study cohort was 12.0 months. Among the total cohort, 43% underwent surgical resection of their primary pancreatic tumor, and most (81%) received chemotherapy. A smaller number of patients received RT to the primary tumor site (30%). These patients received RT either as a planned event (63%) or to manage a local complication such as pain, obstruction, or gastrointestinal bleed (11%). Fourteen patients (5%) received RT to distant metastases for symptom palliation. 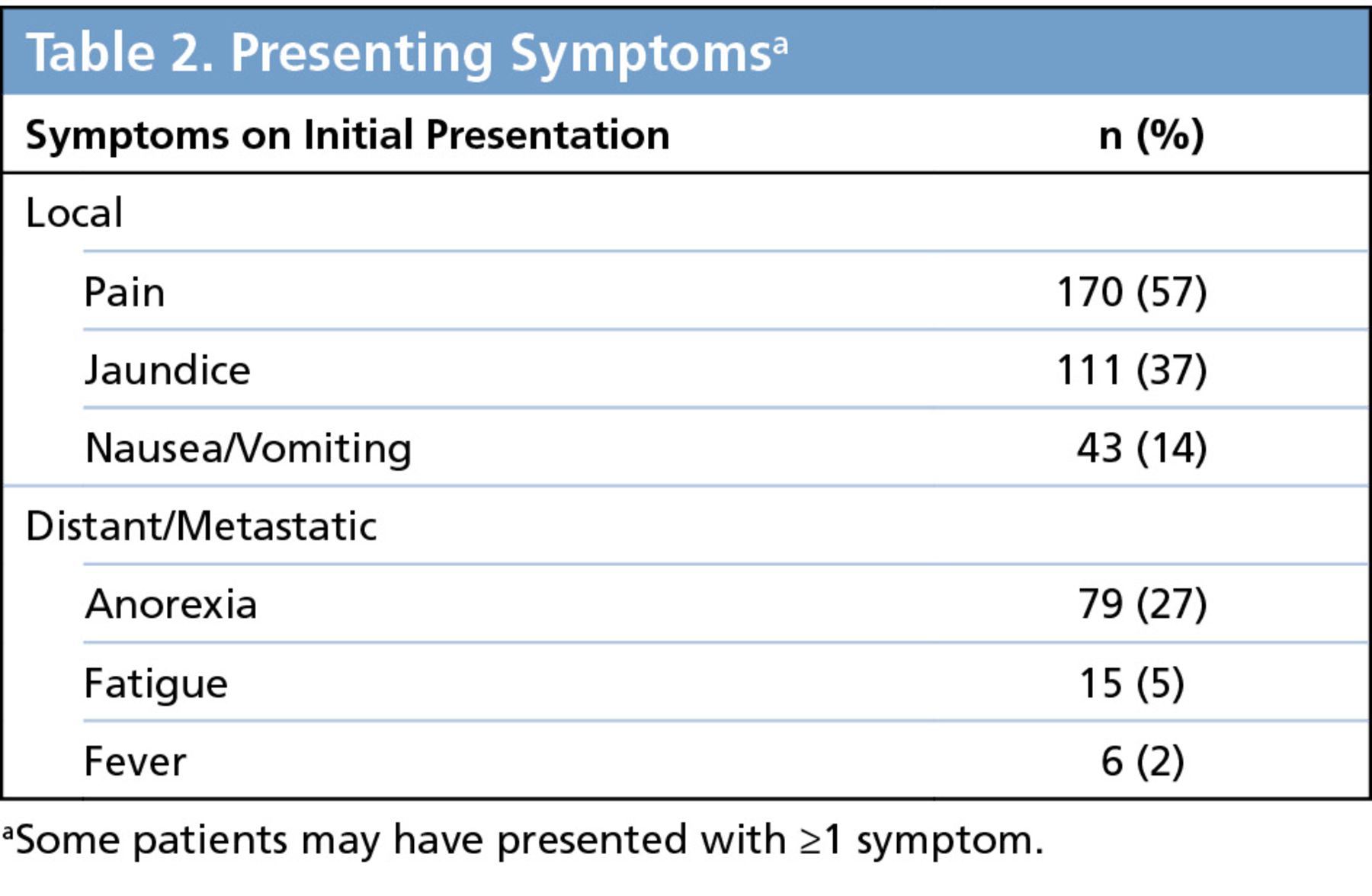 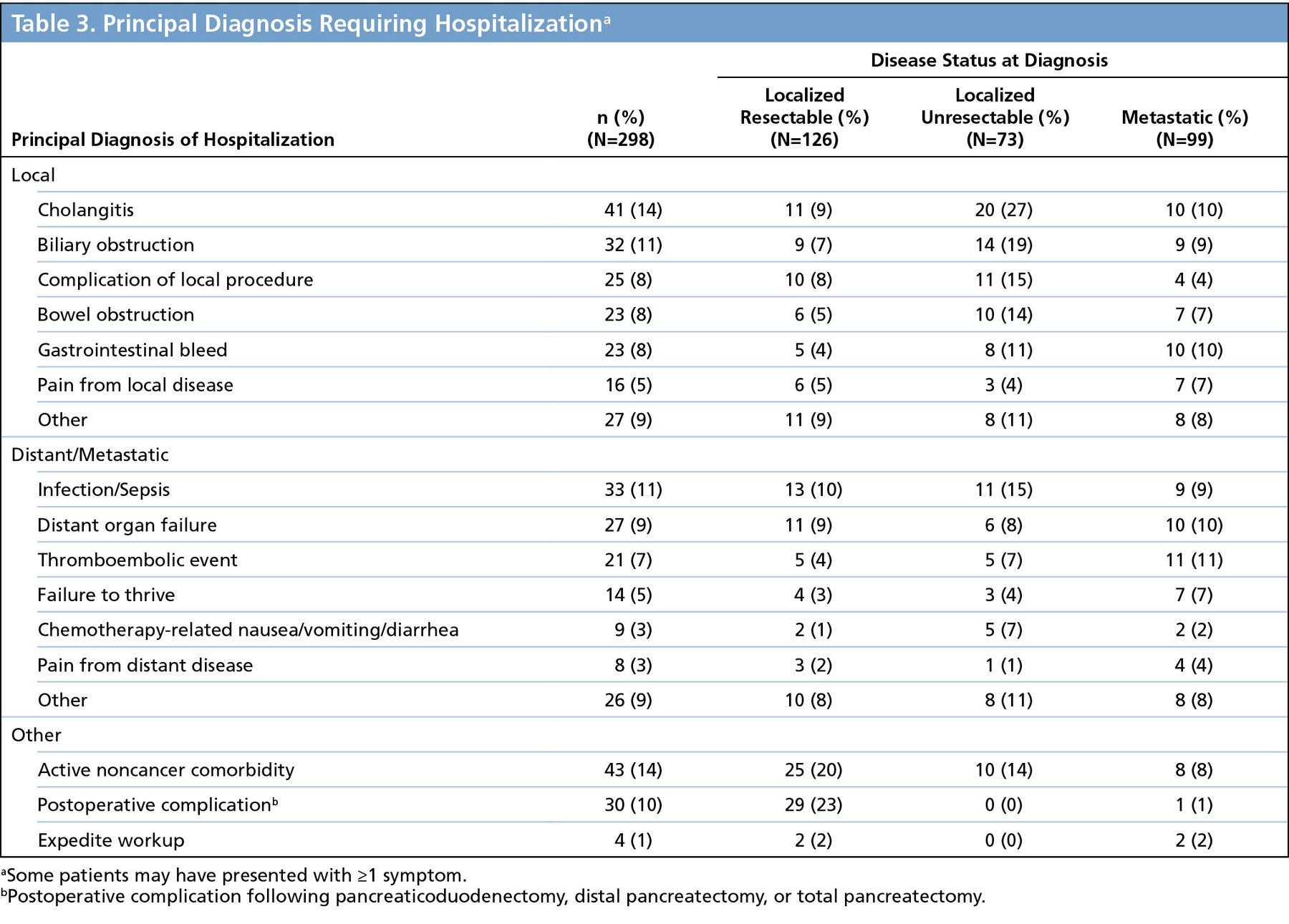 At study end, 79% of patients were deceased (n=236); median survival from diagnosis was 9.5 months. The most common setting of death was in-home hospice (n=98; 33%). An additional 68 patients (23%) died while admitted or enrolled in hospice not otherwise specified, inpatient hospice, or a skilled nursing facility; 48 patients (16%) died while hospitalized for complications related to their pancreatic cancer (Table 1). More than half of hospital inpatients (56%) who died from disease progression were admitted primarily for complications associated with local disease progression, including gastrointestinal bleed (29%), extrahepatic biliary obstruction (13%), bowel obstruction (8%), bowel ischemia (6%), and bowel perforation (2%).

The key finding of this study relates to the morbidity of local disease progression in pancreatic cancer. Our study demonstrated that local disease progression resulted in higher hospitalization rates than distant disease progression. Furthermore, among the subset of patients who died as inpatients, most were admitted for complications from local disease progression. The findings of this study support those of prior research, including the autopsy study by Iacobuzio-Donahue et al,6 which found that locally destructive disease was the cause of death in one-third of patients. The importance of local tumor progression was further supported in a study by Nakahashi et al,7 which examined 89 patients with liver metastases and found that only a small fraction experienced hepatic failure as a result of metastatic involvement. Managing distant spread remains an important clinical goal in pancreatic cancer, although collectively these data also indicate the clinical importance of local tumor progression.

The findings in our study raise the question of whether more aggressive local therapy should be considered for treating the local pancreatic tumor. Outside of surgery, the primary locally directed therapy 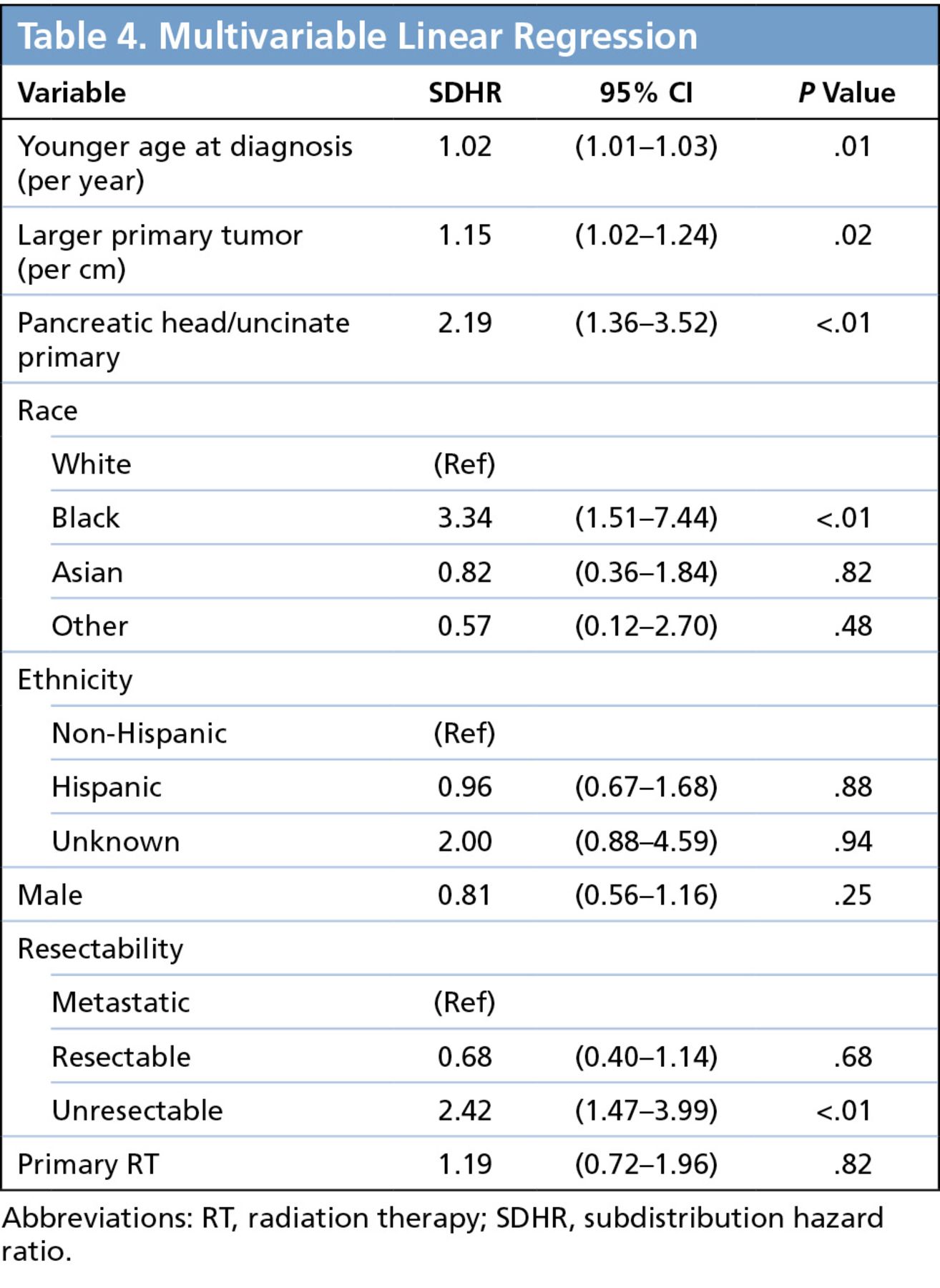 in pancreatic cancer is RT. Unfortunately, the randomized clinical data supporting the use of RT in pancreatic cancer have shown mixed results,1–4 thus its role in the treatment of pancreatic cancer is controversial.8 The more recently reported LAP07 trial evaluated patients with locally advanced disease treated with chemotherapy followed by chemoradiation or additional chemotherapy. The results demonstrated that RT conferred a slight locoregional control benefit (46% vs 32%), with no observable impact on survival. Although more aggressive RT approaches hold promise, such as stereotactic body RT (SBRT)9 or dose-escalated schemas,10 randomized evidence defining the effectiveness of these approaches is lacking. Ongoing trials will hopefully address these questions (ClinicalTrials.gov identifiers: NCT02791503, NCT01926197, NCT01821612).

Along the lines of reducing the impact of local tumor symptoms, one must consider other palliative treatments. Similar to other studies, we found that a large fraction of patients presented with biliary obstruction.11 Endoscopic stenting represents the primary approach to ameliorating biliary obstruction, although operative biliary bypass surgery also plays a role in improving patient QoL and potentially survival.12 Our study also found that most patients presented with pain. Although analgesic medications represent the primary treatment, other palliative procedures may be used, such as celiac plexus neurolysis or palliative RT.

However, although these palliative treatments improve QoL, often they may not address the underlying local pancreatic tumor. Conversely, effective local therapy may not improve survival, although they could substantially improve QoL. Numerous local therapy options exist, such as conventionally fractionated RT, and more modern approaches are also available, including SBRT,9 novel intraoperative techniques such as irreversible electroporation,13 and the development of targeted radiosensitizers.14

Our finding that black race independently predicts for complications of local progression deserves further consideration. The higher relative incidence of pancreatic cancer among blacks is well-documented in the literature15; however, an intrinsically more aggressive clinical course has not been widely described among this population. Furthermore, data showing shrinking outcome disparities over time support modifiable drivers of disparate disease course as playing a larger role than inherent predisposition.16 Although our study had a small proportion of black patients (n=10), additional research is needed in this underserved cohort of patients.

This retrospective observational study has limitations worth considering. One of our primary end points was hospitalization from complications of pancreatic cancer disease progression. Distinguishing local from distant causes of disease progression has inherent challenges even in the prospective setting, and misclassification of this end point is possible. Additionally, the notes for patients hospitalized outside of our network may not be complete, leading to potential underascertainment. Our subset analysis of cause of death only focused on a small fraction of patients. We found that local disease was a major cause of death for patients who died in an inpatient setting; however, it remains entirely possible that those who died at home had different patterns of disease progression. Finally, our cohort may not represent the standard population of patients with pancreatic cancer, which raises questions surrounding generalizability. For example, UC San Diego Moores Cancer Center cares for a higher fraction of patients with resectable disease (43%) than the general population with pancreatic cancer, due to the institution's status as a regional referral center for pancreaticobiliary surgery. Although this could potentially bias our results, our subset and multivariable analysis helped separate the impact of disease stage.

Despite the importance of metastatic disease, local disease progression in pancreatic cancer places a great burden on our patients. Improved combination systemic therapy regimens may work similarly on distant and local disease; however, many patients cannot tolerate these aggressive cytotoxic therapies. Although local therapies may not substantially influence survival, it is possible that an effective local treatment could substantially improve patient QoL. Thus, future research should focus on improving local therapies to help optimize patient outcomes.