Major Changes in the NCCN Guidelines for Rectal Cancer

Clinicians will find major changes to the NCCN Guidelines for Rectal Cancer, which are now more inline with those for colon cancer, according to members of the NCCN Colon and Rectal Cancers Panels who spoke on the topic at the NCCN 23rd Annual Conference. Some patients with rectal cancer can also be recommended for a “watch and wait” approach, possibly avoiding resection, they said.

“The rectal cancer guidelines have been completely reworked to include the idea of mirroring the adjuvant therapies that we use in colon cancer,” said Dr. Grothey. “In the past few years, every time our committee looked at the rectal cancer guidelines, we realized they were not up to date, but we kind of kicked the can down the street. But now we've put together a rectal cancer working group that looked at many things and made revisions, including the definition of the rectum.” The new definition is based on MRI delineating the area below a virtual line from the sacral promontory to the upper end of the symphysis. “The MRI definition is potentially very useful. You can say this is rectal cancer and this is colon cancer,” Dr. Willett added.

Dr. Grothey said the aim has been to align the rectal and colon cancer guidelines, where possible. Before this, “we had some interesting discrepancies between them,” he noted. The adjuvant treatment of stage II disease is an example. The former guidelines listed FOLFOX (5-fluorouracil/leucovorin/oxaliplatin) as a preferred option for stage II rectal cancer, but for stage II colon cancer the recommendation was fluoropyrimidine without oxaliplatin as postoperative adjuvant treatment (with oxaliplatin reserved for stage III). “This is a complete change in the guidelines,” Dr. Grothey said.

Another change is to elevate the importance of MRI in the diagnostic workup, as Dr. Willett indicated in his talk. Although the use of MRI is certainly not new, “there is more adoption of this now in staging. Pretty much all patients receive an MRI,” he said. MRI has an accuracy of up to 94% for T stage and up to 85% for N stage.1

There is new emphasis on neoadjuvant therapy, especially the concurrent use of chemotherapy and radiotherapy (RT), Dr. Willett said (Figure 1). “We've traditionally been treating patients with RT and concurrent chemotherapy, waiting 6 weeks or so, then doing surgery. Chemotherapy is given after these options, but the data for using adjuvant chemotherapy [are] ambiguous, at best,” he pointed out. “There is a lot of interest now in giving all treatments together, that is, total neoadjuvant therapy,” Dr. Willett said. This means chemotherapy, then chemoradiation (CRT), then surgery, or CRT, then chemotherapy, then surgery. “Either is now recommended in the guidelines.”

Emphasis is also placed on the so-called circumferential margin; in particular, whether some patients may not require preoperative RT. “Patients with confined rectal cancer where the surgical resection margin is not threatened may not need RT,” Dr. Grothey added.

A phase II study from Memorial Sloan Kettering Cancer Center (MSKCC) evaluated 32 patients with stage II–III disease who received preoperative FOLFOX plus bevacizumab with selective rather than consistent use of CRT.2 All were candidates for low anterior resection with total mesorectal excision (TME). Patients with stable/progressive disease had RT before TME, whereas responders had immediate TME. Postoperative RT was planned if R0 resection was not achieved. Postoperative FOLFOX × 6 was recommended, but adjuvant regimens were left to the clinician's discretion. The primary outcome was R0 resection rate.

Of 30 patients completing preoperative chemotherapy, all had tumor regression and TME without preoperative CRT. The pathologic complete response rate to chemotherapy alone was 25%, and at 4 years, the local recurrence rate was 0%, disease-free survival was 84%, and overall survival was 91%. The authors concluded that for selected patients with clinical stage I–III rectal cancer, neoadjuvant chemotherapy and selective RT does not seem to compromise outcomes.

One of the biggest changes is more acceptance of an observational approach—a “watch and wait, nonoperative management”—for select patients experiencing a complete clinical response and no evidence of residual disease after neoadjuvant therapy. The guidelines accept this strategy for patients treated at centers with experienced multidisciplinary teams, with the caveat, “the degree to which risk of local and/or distant failure may be increased relative to standard surgical resection has not yet been adequately characterized.”

This recommendation is based on research conducted in Brazil,4 the Netherlands,5 and Denmark,6 and at MSKCC.7 In the MSKCC study of 442 patients with stage I–III rectal cancer, 73 experienced a complete clinical response and underwent nonoperative observation, and 72 had a pathologic complete response and underwent TME.7 At 4 years, 91% of the observational group was alive without disease, as was 95% of the surgical group; local regrowth was seen in 19 and 0 patients, respectively, with none after resection. Rectal preservation was possible for 72% of the observational group.

These encouraging results have been mirrored in other trials, and some have also clearly shown that functional outcomes are better with the nonoperative approach. “This is a very active area of research, and it has value because patients with lower rectal cancers sometimes require operations that result in permanent colostomies,” Dr. Willett pointed out.

“The preliminary data we reviewed suggest that a percentage of patients do well and don't need a radical resection. This is now in the guidelines,” he said.

Dr. Willett has disclosed that he has served as a scientific advisor for Extrinsic Health. 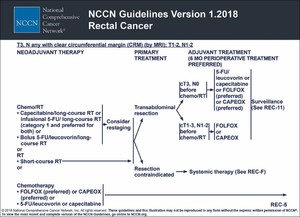