Results from the pivotal IDEA trial, which evaluated 3 versus 6 months of adjuvant oxaliplatin-based chemotherapy, are incorporated into the NCCN Guidelines for Colon Cancer. The guidelines recommend that for patients with low-risk stage III disease, the preferred regimen is CAPEOX for 3 months or FOLFOX for 3 to 6 months. For patients with high-risk stage III disease, the preferred regimen is CAPEOX for 3 to 6 months or FOLFOX for 6 months. In metastatic disease, tumor sidedness should be a consideration when choosing a biologic. For BRAF-mutated disease, several triplets are now recommended options. Importantly, for a subset of patients with metastatic disease, new to the NCCN Guidelines is the incorporation of nivolumab and pembrolizumab as subsequent therapy for those with microsatellite instability–high or mismatch repair–deficient tumors.

The most significant change to the NCCN Guidelines for Colon Cancer was the incorporation of results from the IDEA trial, according to Axel Grothey, MD, Professor of Oncology and Chair, Division of Hematology and Medical Oncology, Mayo Clinic Cancer Center, who described this study at the NCCN 23rd Annual Conference.

“I believe we have the first important changes in adjuvant chemotherapy since 2004,” Dr. Grothey said, referring to the adoption of 6 months of therapy with FOLFOX4 as standard of care, based on results from the MOSAIC trial.1

The IDEA trial has provided results that will be very helpful for clinicians.2 IDEA was a combined analysis of 6 individual studies that determined whether 3 months of adjuvant oxaliplatin-based therapy was as effective as, and less neurotoxic than, 6 months of treatment with the same therapy. The study enrolled 12,834 patients with stage III colon cancer from 20 countries (Figure 1). Of these, 7,763 received FOLFOX (leucovorin/5-fluorouracil/oxaliplatin) and 5,071 received CAPEOX (capecitabine/oxaliplatin) by physician choice. Patients were randomized to 3 or 6 months of adjuvant therapy.

“A high number of patients was needed to make sure, with high confidence, that we are not sacrificing efficacy of therapy for decreased toxicity,” Dr. Grothey said.

IDEA was designed as a noninferiority trial in which 3 months of therapy would not sacrifice >12% of the benefit of the standard 6 months. In statistical terms, the upper 95% CI of the hazard ratio (HR) could not exceed 1.12, to prove noninferiority in 3-year disease-free survival (DFS).

Although the shorter regimen was associated with a dramatic reduction in neurotoxicity, the efficacy end point was not met: 3-year DFS rate was 74.6% with 3 months of chemotherapy and 75.5% with 6 months (HR, 1.07; 95% CI, 1.00–1.15). However, differences were observed according to regimen. For those treated with CAPEOX, 3 months was as good as 6 months, particularly in the low-risk population. For those treated with FOLFOX, 6 months added extra (although small) benefit in terms of DFS, particularly in the high-risk population, Dr. Grothey reported.

“Importantly, the shorter duration of therapy was associated with a remarkable reduction in neurotoxicity,” he added. With FOLFOX, neuropathy (all grades) was observed in 14% of patients receiving 3 months and in 48% receiving 6 months of treatment. With CAPEOX, these rates were 15% and 45%, respectively (P<.001).

Recommendations Based on IDEA

“How I interpret IDEA is that the findings are in the eye of the beholder,” Dr. Grothey concluded. “A 2% difference that is statistically inferior might not be of much clinical value to the patient who does not want neurotoxicity. I think we now have a platform for a framework to discuss these data with patients, and that's the strength of IDEA.”

Metastatic Colon Cancer: Use of Biomarkers

As more is learned about the molecular profile of malignant tumors, biomarkers have become “a moving target,” Dr. Venook said, “but in colon cancer we have a pretty clear view” of how they should be applied.

The updated NCCN Guidelines spell out what clinicians should look for and expect, especially in

advanced disease. Tumors should be evaluated for KRAS, NRAS, and BRAF status, either individually or as part of a next-generation sequencing panel. KRAS and BRAF mutations are mutually exclusive—a fact that can guide the ordering of the tests.

Clinicians should test for the status of microsatellite instability (MSI; also known as mismatch repair [MMR] deficiency). Patients who are MSI-high or MMR-deficient (“2 ways of looking at the same question”) may be candidates for checkpoint inhibitors. These can be identified by immunohistochemistry or gene sequencing.

“We believe that these tests should be run up-front on patients, so you can outline what their treatment choices are,” Dr. Venook said.

“For choice of chemotherapy—singlets, doublets, triplets, quadruplets—it turns out that ‘more’ may be better, and this is in the current guidelines,” he noted. The guidelines list more than a half dozen regimens and add-ons, the order of which does not reflect preferences (Figure 3). “The options are more or less based on many different parameters.”

One good option that may be underused is FOLFOXIRI (fluorouracil/leucovorin/oxaliplatin/irinotecan) with or without bevacizumab. This is based on the results of the TRIBE study that showed FOLOXIRI/bevacizumab produced a 4-month advantage in overall survival (OS) versus FOLFIRI/bevacizumab (P=.03).3,4 “It doesn't, however, increase your ability to resect metastases, but it really does distinguish outcomes,” Dr. Venook observed.

TRIBE also showed the prognostic importance of the BRAF V600E mutation, as patients with that mutation had substantially worse OS. (Other BRAF mutations are not associated with such a poor prognosis.) In this subgroup, FOLFOXIRI/bevacizumab conferred a 9-month survival benefit versus FOLFIRI (fluorouracil/leucovorin/irinotecan) plus bevacizumab. This regimen, therefore, improves outcomes for patients with poor-risk factors, such as the subset for whom an aggressive approach is important. Because of these findings, Dr. Venook said, “We tend to lean toward FOLFOXIRI as our first-line treatment.”

Recent data pertaining to the “sidedness” of the tumor has informed the use of EGFR monoclonal antibodies. Specifically, cetuximab and panitumumab can only be used in KRAS/NRAS wild-type tumors that are located in the left colon.

Two fundamental studies evaluated cetuximab versus bevacizumab as first-line treatment for metastatic RAS wild-type tumors. In FIRE, clear benefit was shown for cetuximab/FOLFIRI over bevacizumab/FOLFIRI, conferring an 8-month OS benefit.5 In Europe, where FIRE-3 was conducted, “Many clinicians accept it as a standard that cetuximab should be used in these patients,” Dr. Venook said.

In contrast, CALGB/SWOG 80405, which Dr. Venook led, showed no differences in outcomes between the cetuximab and bevacizumab arms, with FOLFOX or FOLFIRI as backbones.6 The discordant result led to some questions, he said, “but as a cooperative group study conducted and interpreted at arm's length from industry, the results of 80405 have not evolved as they did in FIRE-3,” he pointed out. Differences in the patient populations, prescribing patterns, and other factors could have contributed to the discrepancy from FIRE-3, he added.

“For all the discussion, in fact, what was pointedly obvious is that the difference in the findings relate to bevacizumab, as opposed to cetuximab,” he continued. In patients with all-RAS wild-type disease treated with bevacizumab, median OS was much higher in CALGB/SWOG 80405 than in FIRE-3, whereas survival in the cetuximab arms was similar. “Bevacizumab [arms] did much more poorly in Europe….We are not sure why. Perhaps some of this is due to the use of bevacizumab at time of progression in the United States,” he suggested.

The Issue of Sidedness

An analysis of outcomes according to tumor sidedness was performed on 1,025 patients from CALGB/SWOG 80405.7 The analysis showed some differences

The best outcomes were seen in patients with left-sided disease who received cetuximab. They lived fully 15 months longer than those with right-sided disease who received cetuximab (median, 36.0 vs 16.7 months). Similar findings were seen in analyses of other pivotal colon cancer trials. “Clearly, the EGFR antibody cetuximab does not benefit patients with right-sided cancer, independent of their RAS status,” Dr. Venook concluded. “We're struggling to figure this out.”

Sidedness may not be a factor in the later line use of EGFR antibodies, which have shown some efficacy in this setting, he added, and this is reflected in the guidelines for previously treated patients.

Dr. Venook further pointed out that EGFR antibodies should not be used in patients with potentially resectable synchronous liver and/or lung metastases. This is based on poor outcomes in cetuximab-treated patients in the New EPOC study.8 “This is a mystery as to why that would be,” Dr. Venook commented. “It's as if the biology of the disease may be different.”

Also new to the NCCN Guidelines are recommendations for the treatment of BRAF-mutated tumors, an aggressive disease subset with a distinct biology. “A subset of these patients do reasonably well, but most have very rapid disease and a bad result,” Dr. Venook noted.

Dr. Venook's group and others have been evaluating the effect of more aggressive therapies in BRAF-mutated disease, using combinations of RAF inhibitors, BRAF inhibitors, and other targeted agents. In a study by Kopetz et al,10 progression-free survival was doubled with the triplet of cetuximab/vemurafenib/irinotecan.

Drs. Venook and Grothey looked down the road to future revisions in the guidelines. Dr. Venook anticipated a change in regorafenib dosing (which has already happened); and data on the doublet of TAS-102 plus bevacizumab will probably lead to changes as well. The results of 2 highly anticipated studies of checkpoint inhibition in microsatellite stable disease (atezolizumab + cobimetinib) and for BRAF-mutated tumors (the triplet of encorafenib/cetuximab/binimetinib) should be available soon.

Recommendations from the IDEA study for adjuvant treatment of colon cancer. 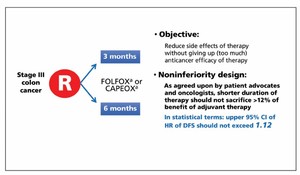 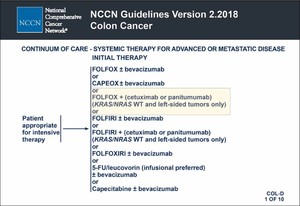 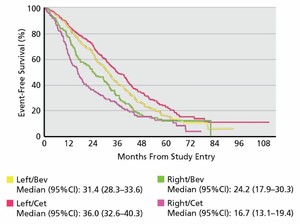