Search for other papers by David A. Liebner in
Current site
Google Scholar
PubMedClose
MD

Inflammatory myofibroblastic tumors (IMTs) are soft tissue neoplasms with rare metastatic potential. Approximately half of IMTs are positive for an ALK rearrangement, and ALK inhibitors have been used successfully in the treatment of IMTs with a variety of ALK fusions. This report describes a 21-year-old woman with an aggressive, metastatic IMT with a novel NUMA1-ALK fusion that showed a dramatic response to the ALK inhibitors crizotinib and alectinib. To our knowledge, this report provides the first published description of an IMT with a NUMA1-ALK fusion. The patient's aggressive IMT responded favorably to crizotinib and alectinib, suggesting that ALK inhibitors may be effective in IMT with NUMA1-ALK fusions. We review published reports of ALK-driven IMTs that have received ALK inhibitor therapy and suggest characteristics that may be associated with favorable response to treatment. We also discuss the strengths and limitations of immunohistochemistry, fluorescence in situ hybridization, and next-generation sequencing in the diagnosis and management of IMTs.

Inflammatory myofibroblastic tumors (IMTs) are rare soft tissue neoplasms that usually arise in the lung, abdomen, or pelvis and affect primarily children and young adults.1 IMTs are usually localized and metastatic disease is rare, accounting for <5% of all cases.2 IMTs most often present with signs and symptoms restricted to the areas affected; however, 15% to 30% of people present with fever, weight loss, malaise, microcytic anemia, elevated erythrocyte sedimentation rate, thrombocytosis, or polyclonal hypergammaglobulinemia.3 Although the histology of IMT is variable, tumors are generally composed of spindle cells in an inflamed stroma of plasma cells, lymphocytes, and eosinophils.2 Surgery is the primary management modality; however, lesions may recur after surgical resection.2

Recent evidence suggests that the anaplastic lymphoma kinase (ALK) gene plays a role in the pathogenesis of some IMTs. ALK encodes a receptor tyrosine kinase normally expressed only in neural tissue,4 and rearrangements of ALK can result in inappropriate activation of the ALK receptor tyrosine kinase.5 Approximately half of IMTs are associated with an ALK gene rearrangement.6 Fusions of ALK with TPM3, TPM4, ATIC, CLTC, CARS, RANBP2, EML4, and SEC31L1 have been described previously.5,7

ALK inhibitors have emerged as a successful therapy for ALK-associated IMT in both adult and pediatric patients.8–14 To our knowledge, however, the response of IMT associated with a NUMA1-ALK fusion has never been documented. This report describes a 21-year-old patient with widely metastatic IMT with a NUMA1-ALK fusion who demonstrated a marked response to ALK inhibitor therapy. We then review published reports of ALK-driven IMT treated with ALK inhibitors and suggest predictors of favorable response to treatment.

A 21-year-old woman initially presented with left shoulder pain and left arm swelling. She reported that she had experienced a 10- to 15-pound weight loss during the preceding year, a few months of fatigue and dry cough, and a few weeks of shortness of breath and dysphagia. She had also experienced intermittent night sweats and left-sided pleuritic chest pain, all of which had worsened acutely over the past month.

She was diagnosed with an acute deep vein thrombosis of her left internal jugular vein. On further evaluation, she was found to have a large mediastinal mass encasing multiple mediastinal structures and lesions involving the lungs, liver, spleen, kidney, bone, peritoneum, and iliacus muscle. A staging PET/CT scan showed multiple hypermetabolic lesions above and below the diaphragm, involving the mediastinum and left hemithorax, bilateral lungs, pleura, liver, left kidney, axial skeleton, and musculature (Figure 1A). Differential diagnosis at the time included lymphoma and metastatic germ cell tumor.

Biopsies of a lung mass and a left supraclavicular lymph node were performed. Histologic sections from both samples revealed a spindle cell proliferation that was variably cellular, with broad areas of fibrosis and obscuring lymphoplasmacytic infiltrates, without evidence of high-grade anaplastic features, coagulation tumor necrosis, or atypical mitotic figures (Figure 2). On immunohistochemistry (IHC), lesional cells showed unequivocal, strong, and diffuse reactivity for ALK (in a cytoplasmic and perinuclear pattern) and weak focal reactivity for smooth muscle actin and desmin. Other markers, including CD45, CD3, CD20, CD163, CD15, CD30, EBER, PAX5, pan cytokeratin-AE1/AE3, S100, and pan cytokeratin-MNF116, were negative. Plasma cells stained diffusely for both Kappa and Lambda with no evidence of light chain restriction. Fluorescence in situ hybridization (FISH) testing was reported as negative for ALK translocation; however, next-generation sequencing (NGS) by Foundation Medicine (Cambridge, MA) revealed a novel NUMA1-ALK fusion. The ALK translocation was detected on both DNA and RNA sequencing

When the patient was scheduled to begin therapy, NGS results were still pending. Given the strong reactivity for ALK by IHC, she was started on crizotinib, 250 mg twice daily. At 2-week follow-up, the patient's symptoms had markedly improved: her dry cough had resolved, she felt less pressure in her chest, and she was able to eat and swallow pills. Apart from lower-abdominal cramping, which was controlled with hyoscyamine, she tolerated crizotinib therapy well.

Six weeks after beginning crizotinib, nivolumab at 3 mg/kg intravenously every 2 weeks was added to her regimen given evidence of high-positive PD-1 expression in tumor-infiltrating lymphocytes (>25%, clone NAT105 by Cell Marque; Rocklin, CA). She received 12 weeks of combination therapy with crizotinib and nivolumab with continued radiographic response to therapy. However, she developed grade 2 pneumonitis and grade 3 transaminitis, suspected to be related to nivolumab and possibly to crizotinib. Both agents were held and she was treated with prednisone, 1 mg/kg/d, after which she experienced rapid improvement in her pneumonitis and normalization of her transaminases. Prednisone was tapered slowly over 6 weeks and crizotinib was 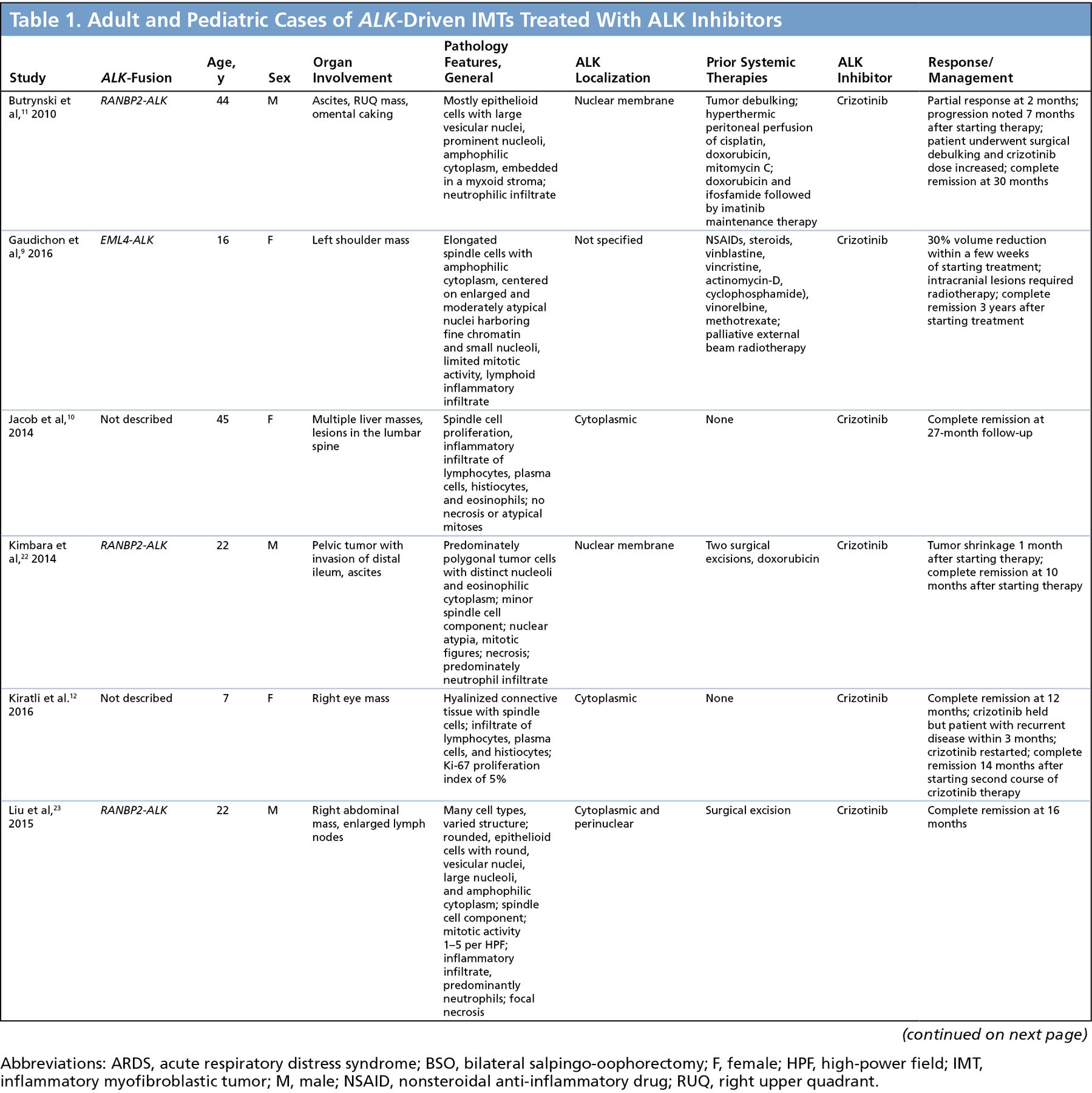 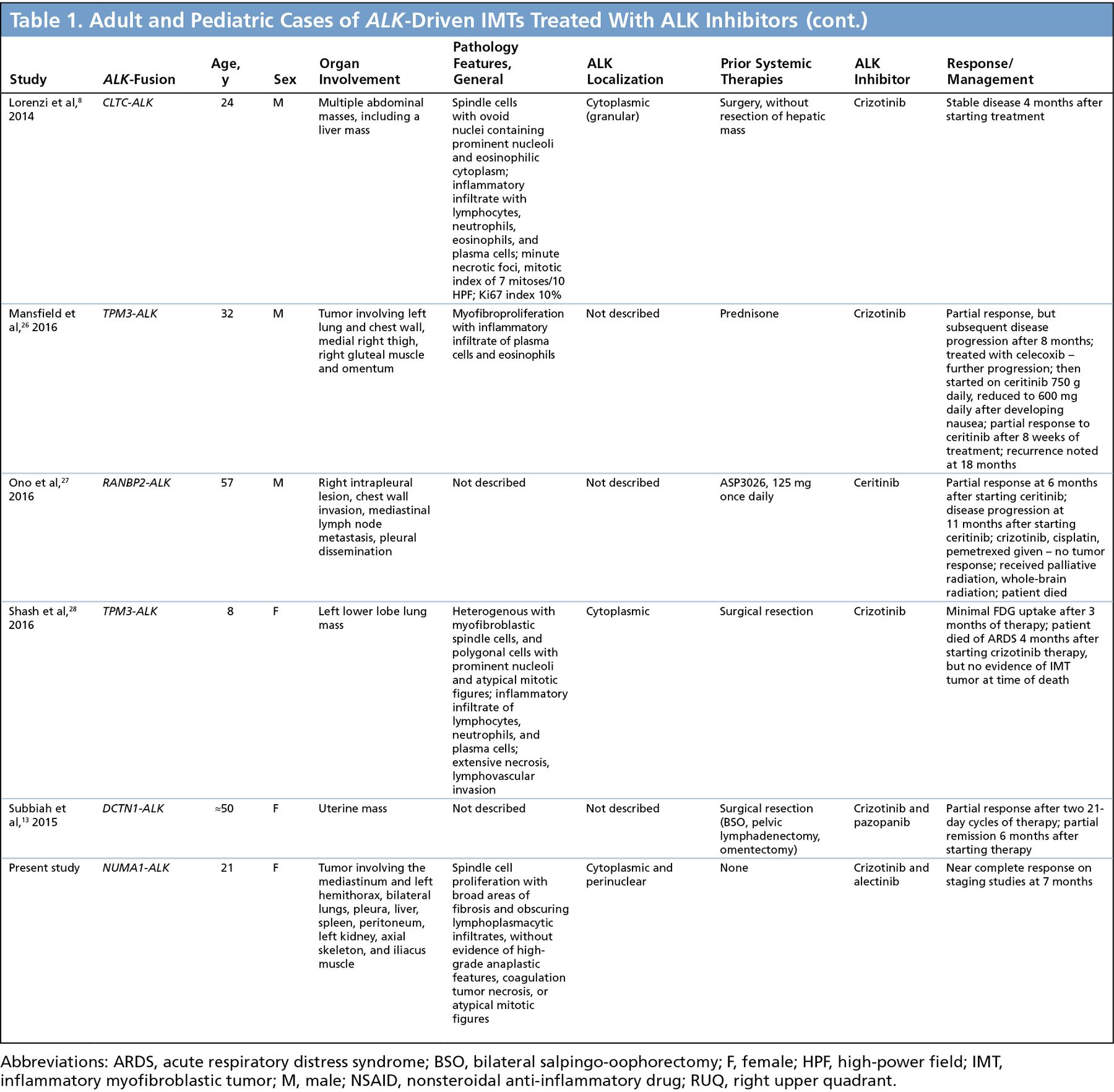 resumed after a 4-week break. However, because of recurrent pneumonitis 3 weeks after resuming crizotinib, a decision was made to transition to alectinib to exclude the possibility that crizotinib was contributing to her pulmonary symptoms. Her pneumonitis and transaminitis resolved with the change to alectinib and with a second course of prednisone. At the time of writing, she continues to do well clinically, with evidence of a near complete response on staging studies at 13 months (Figure 1C).

This study is the first to our knowledge to describe the NUMA1-ALK fusion in IMT and demonstrate the effectiveness of the ALK inhibitors, crizotinib and alectinib, in the management of this IMT variant.

The NUMA1-ALK fusion has not been previously documented in public databases, including The Cancer Genome Atlas (TCGA), the International Cancer Genome Consortium (ICGC), and the Catalogue of Somatic Mutations in Cancer (COSMIC). However, numerous other ALK fusions have been recorded in the context of IMTs5 and are thought to drive tumor formation by activating the ALK tyrosine kinase, a member of the insulin receptor family.15 ALK-positive IMTs have previously demonstrated an excellent response to ALK inhibitors such as crizotinib8–13 and ceretinib.14 In the present case, an IMT with a novel NUMA1-ALK fusion also demonstrated a marked initial response to crizotinib, and ongoing response to the second-generation ALK inhibitor alectinib.

The fact that our patient had metastatic disease despite the absence of high-grade anaplastic features and necrosis on histology was not unprecedented; favorable histologic characteristics do not necessarily predict a favorable clinical course in IMT.16 However, ALK positivity usually predicts localized disease16–18 with the exception of the epithelioid variant of IMT, driven by the RANBP2-ALK or RRBP1-ALK fusions.19,20 Epithelioid inflammatory myofibroblastic sarcoma, in contrast to most IMTs that demonstrate ALK staining in a cytoplasmic pattern,1 demonstrates ALK staining in a nuclear membrane or perinuclear pattern.19 Interestingly, our patient's tumor also showed ALK reactivity in a perinuclear pattern, likely reflecting the nuclear localization of the nuclear mitotic apparatus (NUMA) protein, which contributes to chromosome separation and nuclear rebuilding during cell division.21

The present study highlights the strengths and limitations of IHC, FISH, and NGS in the diagnosis and management of IMTs. Our false-negative FISH results may have arisen from a conservative threshold for positivity, incorrect probe hybridization, DNA folding, nuclear sectioning, or tumor heterogeneity.27,28 Ambiguity regarding ALK reactivity can prevent the timely use of ALK inhibitors effective against ALK-positive IMT; IHC showing ALK reactivity may be sufficient grounds to initiate treatment with ALK inhibitors.9 However, NGS may help resolve discrepancies between IHC and FISH in the process of diagnosing IMT.

This report presents a 21-year-old woman with widely metastatic IMT driven by a novel NUMA1-ALK fusion. Although the ultimate durability of her response is unknown and the emergence of resistance to ALK inhibitors is well described in other ALK-related malignancies,29 treatment with the ALK inhibitors crizotinib and alectinib has thus far led to a deep and sustained response of ≥13 months. Notably, this therapy was initiated at a comprehensive cancer center with experience managing IMTs; we strongly recommend multidisciplinary evaluation at an experienced center for all patients with newly diagnosed IMTs, and encourage all centers that engage in the treatment of IMTs to pursue prospective collection of clinical disease features, coupled with comprehensive molecular characterization of tumors,30 with the goal of characterizing the full spectrum of oncogene fusions in IMT, determining the prognosis associated with each variant, and predicting the response of each variant to kinase inhibitor therapy. Sharing these data through existing cancer databases (ClinicalTrials.gov identifier: NCT02677961) will be essential for progress in managing this disease.31,32

PET/CT demonstrating burden of disease. (A) At initial presentation, PET/CT demonstrated multiple hypermetabolic lesions above and below the diaphragm involving the mediastinum, bilateral lungs, left pleura, liver, left kidney, abdomen, axial skeleton, and musculature (maximum standardized uptake value [SUVmax], 48.7). (B) One month after crizotinib therapy initiation, PET/CT demonstrated reduced size and FDG avidity of several hypermetabolic masses/lesions involving the lung/pleura, liver, and bone, as well as the left perinephric region (SUVmax, 14.1). (C) After 6 months of crizotinib therapy, patient was switched from crizotinib to alectinib for concern for possible contribution of crizotinib to her pneumonitis. A PET/CT performed one month after beginning alectinib demonstrated further reduction in FDG avidity of neck, chest, and bone lesions (SUVmax, 1.9).

Illustration of the NUMA1-ALK fusion.