New Cancer Drug Approvals From the Perspective of a Universal Healthcare System: Analyses of the Pan-Canadian Oncology Drug Review Recommendations

Background: FDA approvals do not consider cost, but they set the tone for regulatory approvals worldwide, including in countries with universal healthcare where cost-effectiveness, utility, and adoption feasibility are considered rigorously. Methods: Data from the pan-Canadian Oncology Drug Review (pCODR), a national drug review system that makes evidence-based funding recommendations to Canada's provinces and territories, were collected. Our objectives were to assess (1) temporal trends in cost and efficacy of drugs reviewed, (2) correlations among magnitude of benefits, cost, and pCODR decisions, and (3) predictors of approvals. Results: A total of 60 drugs for 91 indications were reviewed by pCODR from January 2012 to January 2018. Of the 91 reviews (approved previously by FDA), 18 received negative recommendations on the grounds of inadequate clinical benefits; 87% (64/73) of those approved were conditional on improvement in cost. Surrogate outcomes were used to support approvals in 83% of the reviews, which were not correlated with overall survival (rSpearman = +0.16; P=.24). Median cost/quality-adjusted life years (QALY) increased by 36% per annum (quantile regression, P=.0029), although benefits in overall and progression-free survival were stable (P=.21 and .65, respectively). Median-based incremental cost-effectiveness ratio (ICER) of new drugs was $186,403 CAD (range, $7,200 to $2.1 million). Higher ICER was a strong predictor of a negative pCODR recommendation (P<.01). Conclusions: A substantial number of cancer drugs that are FDA approved for public use do not meet Canadian standards for efficacy. Cost of cancer drugs increases by a third annually in Canada, but the benefits—measured mostly with surrogates that did not correlate with survival—are stable. With finite resources to share among multiple societal priorities, such as education and preventive health, cancer drug cost may be unsustainable despite price regulation. 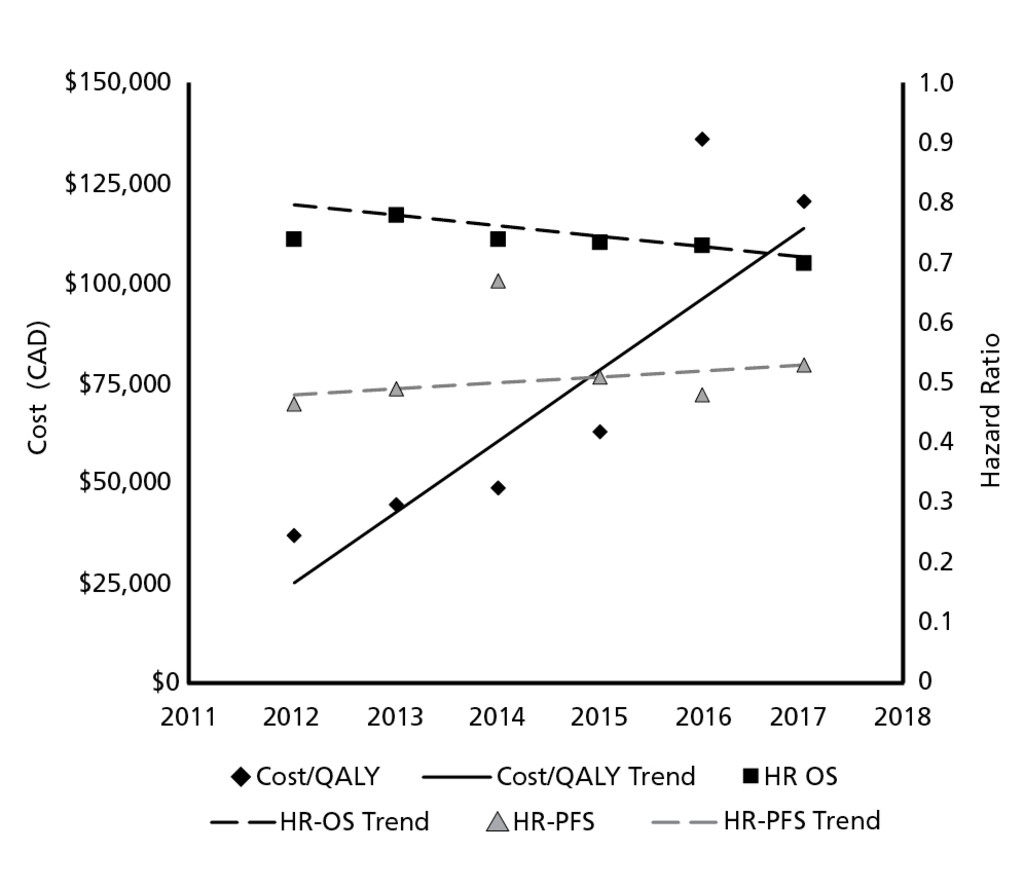 Comparative representation of change in efficacy and cost of new anticancer drugs reviewed by the pan-Canadian Oncology Drug Review from 2012 to 2018. 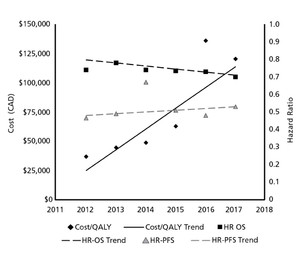