Access was granted to the NCDB Participant Use Data File (PUF) for patients diagnosed with breast cancer from 2004 through 2014. Patients were identified based on International Classification of Diseases for Oncology, Third Edition (ICD-O-3) site codes C50.0 through C50.9.16 The NCDB is a nationwide, facility-based, comprehensive, clinical surveillance resource oncology data set, started jointly in 1989 by the Commission on Cancer (CoC) of the American College of Surgeons and the American Cancer Society, that integrates hospital registry data collected in >1,500 CoC-accredited facilities. The data represent approximately 70% of all newly diagnosed cancer cases nationwide annually. The NCDB PUF is a HIPAA-compliant data file. Institutional Review Board approval was not required for this study because the PUF is deidentified.

After obtaining permission from the NCDB, we queried the 2014 NCDB PUF for patients who were diagnosed with histologically confirmed invasive breast cancer from 2010 to 2013. We limited our analysis to 2010 through 2013 because the NCDB began requiring HER2 reporting in 2010. Vital status information is not included for patients diagnosed in 2014 because of the limited follow-up for these patients. Follow-up ranged from 6 years for patients diagnosed in 2010 to 3 years for those diagnosed in 2013. The PUF data do not include cause of death information, and therefore cause-specific survival cannot be calculated. In our analysis, we included adults aged ≥18 and ≤70 years to maximize the number of patients treated with chemotherapy and minimize the non–cancer-related deaths. We selected female patients with node-negative, HER2-positive invasive breast cancer <2 cm. Patients had to have undergone definitive surgery (lumpectomy with radiation or mastectomy) with negative margins. We excluded those who were HER2-negative or had unknown HER2 status, whose survival time was missing, and who did not receive definitive surgery. Figure 1 depicts the CONSORT diagram.

and the log-rank test were used to compare OS between the treatment and nontreatment groups. Additionally, both a multivariate Cox proportional hazards regression model and propensity score–matched univariable Kaplan-Meier curves were constructed to control for clinicodemographic differences between the study groups. For the multivariate Cox model, variables were selected in a stepwise fashion from the pool of candidate variables that displayed significant univariable associations with treatment status. During the selection process, P<.20 was required for initial inclusion in the model and P<.10 was required to remain in the model. The propensity score model of treatment receipt was based on a multivariate logistic regression model, and used a variable selection process similar to the Cox model variable selection process. Treated and untreated patients were matched 1:1 on propensity score, with a maximum allowed difference in propensity score of ±2%. Statistical analysis was performed using SAS 9.4 (SAS Institute Inc.), and P<.05 was considered statistically significant for all comparisons.

A total of 21,148 patients identified in the database between 2010 and 2013 met inclusion criteria. Baseline patient characteristics are summarized in Table 1. Most were white (82.2%), were aged ≥50 years (71.3%), had good performance status (87.1% with Charlson/Deyo score of 0), had some form of insurance (96.9%), had no other prior malignancy (87.9%), had ductal carcinoma histology (92.9%), and had T1c stage disease at diagnosis (48.2%). Between 2010 and 2013, marked shifts occurred in the number of patients classified as receiving ACT alone compared with ACT combined with immunotherapy (Table 2). Associations between stage and clinicodemographic characteristics are summarized in Table 3.

Association Between Treatment Receipt and Tumor and Sociodemographic Characteristics 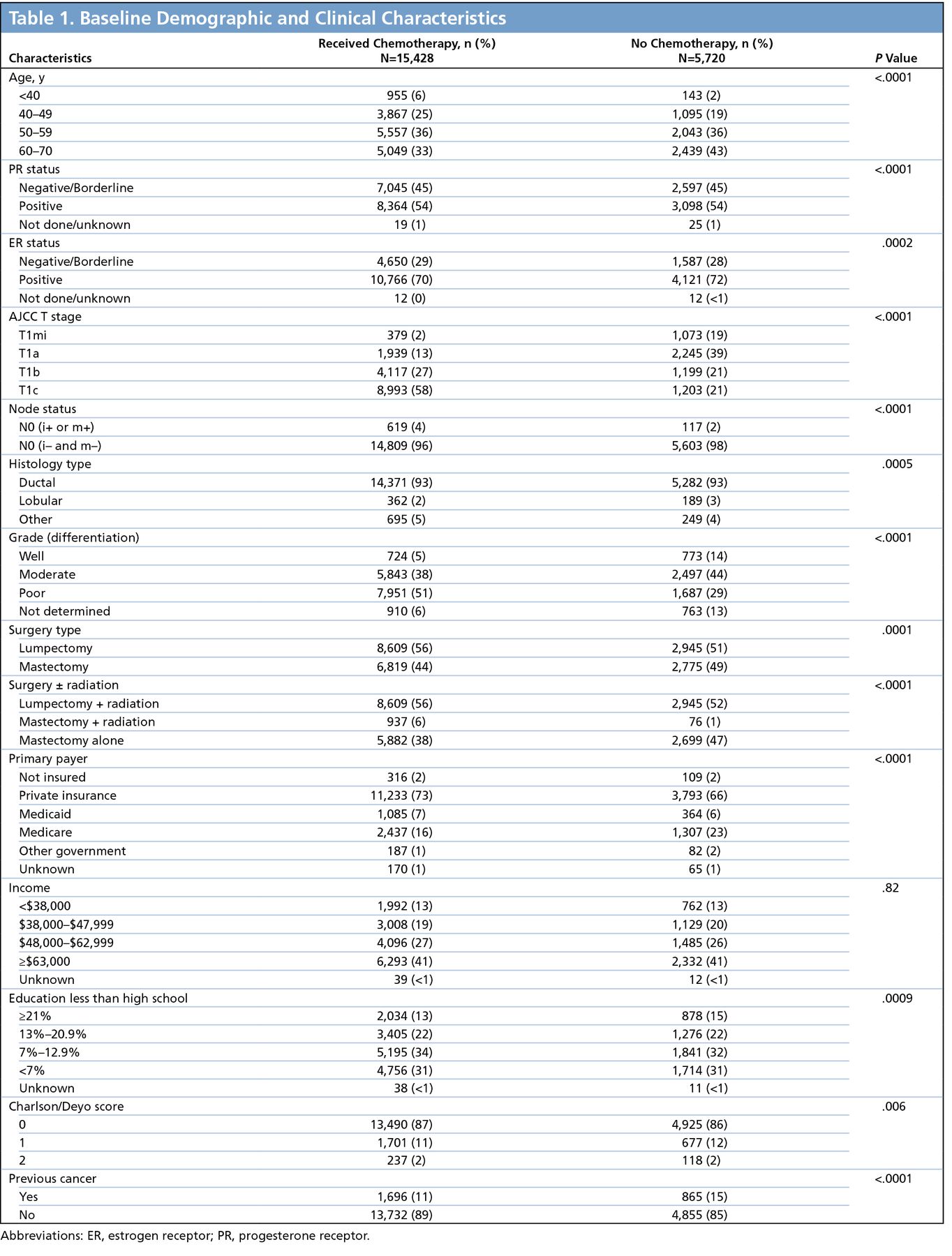 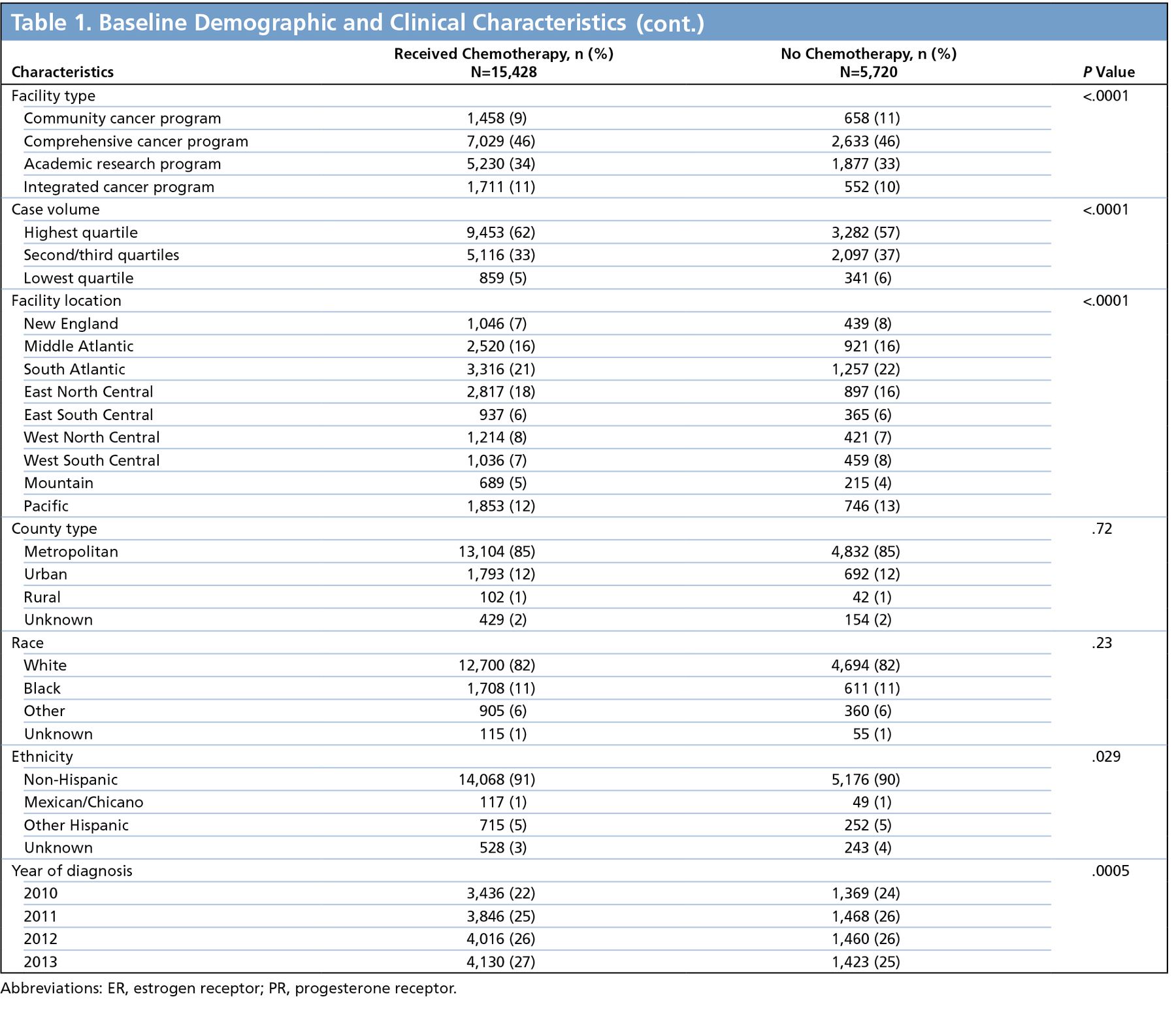 Patients residing in areas with low educational attainment (≥21% of the population without a high school degree), with poor performance status (Charlson/Deyo score of ≥2), or a history of previous cancer were less likely to receive ACT. Academic/Research

Reporting in the NCDB 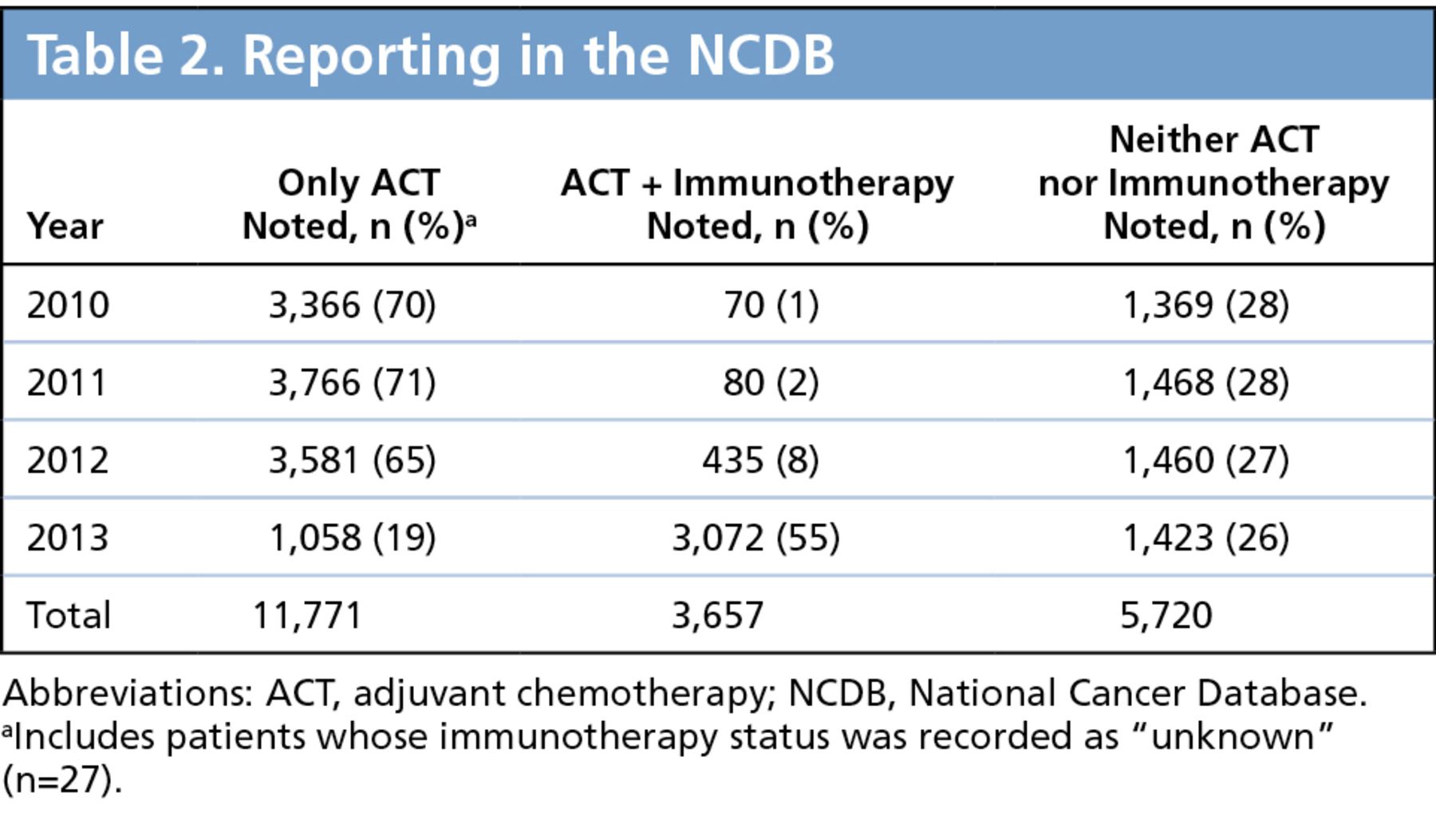 and integrated network program facilities were associated with higher rates of treatment (73.6% and 75.6%, respectively) compared with community cancer programs (68.9%; P<.0001). Likewise, facilities with a higher breast cancer case volume had higher treatment rates compared with those in the lowest quartile (74.2% vs 70.9%; P<.0001). Treatment rates varied by geographic location and insurance type; race, median household income, and type of county (metropolitan, rural, urban, missing) were not associated with use of ACT.

Associations Between Stage and Clinicodemographic Characteristics 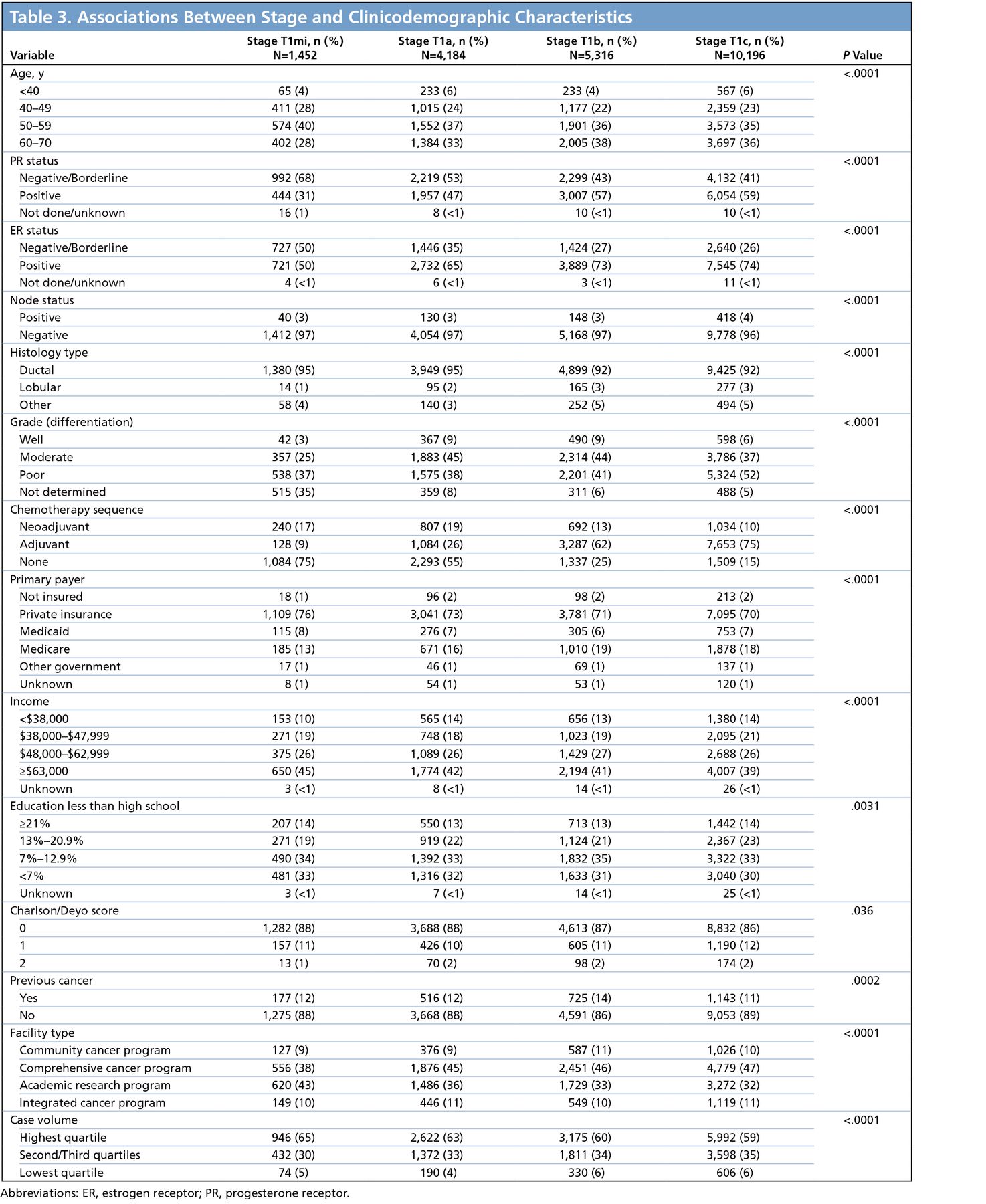 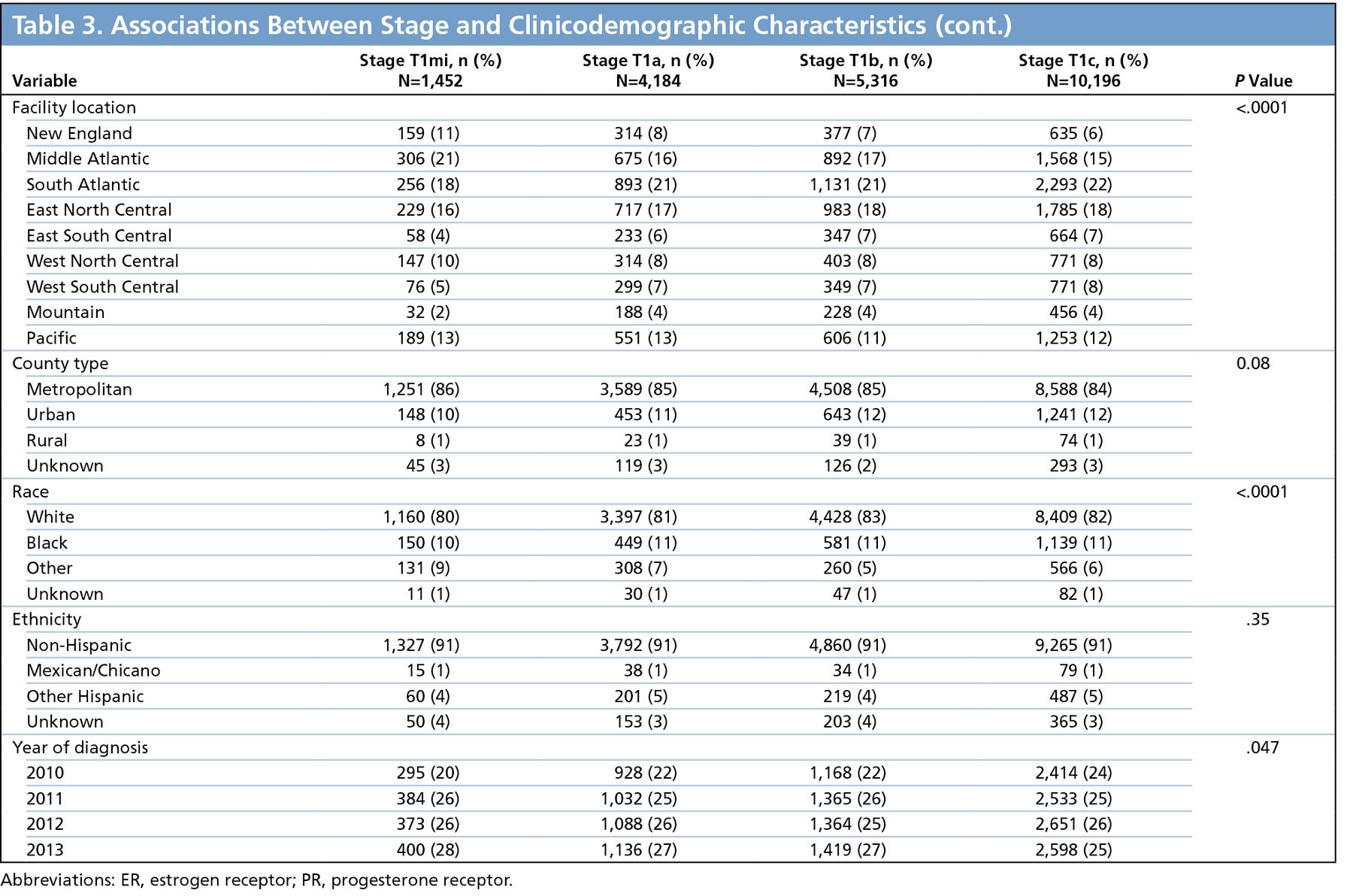 Node-negative, HER2-positive breast cancer <2 cm is a challenging tumor type in which to conduct

randomized clinical trials, given its low incidence, low event rate, and, as demonstrated in our report as well as others, small absolute benefit from chemotherapy. However, 5 of 6 large clinical studies in patients with HER2-positive tumors showed a consistent reduction in relapse with trastuzumab-based chemotherapy compared with observation.5,6,14,17–19 A recent meta-analysis examined potential benefits for patients with tumors <2 cm and ≤1 positive lymph node20; however, across the 5 trials studied, only 75 patients had T1a–b, node-negative disease, and <600 patients had node-negative disease <2 cm. Per the study authors, the observed results were likely driven by the high proportion of patients with T1c disease and ≤1 positive lymph node. Due to underrepresentation, these large adjuvant studies provide no direct evidence regarding use of trastuzumab in patients with node-negative tumors <2 cm.20

Risk stratification of T1a and T1b tumors based on clinicopathologic features, including hormone receptor status, tumor grade, and Ki-67 index, has been attempted in previous studies. ER status in node-negative, HER2-positive tumors <2 cm has not been associated with outcome in several prior trials.4,10,22 To our knowledge, the only prior trial to show an effect based on hormone receptor status was the EIO series,2 reporting a nonintuitive reduced DFS in patients with node-negative, ER-positive, HER2-positive tumors <2 cm (HR, 5.2 vs 2.4 for the whole HER2-positive population). Our analysis supports hormone receptor status as a predictive risk factor in node-negative breast cancer <2 cm, because patients with ER/PR-negative tumors had poorer survival overall than those with ER- or PR-positivity (HR, 1.51 [95% CI, 1.23–1.85]; P<.0001), regardless of tumor grade (poorly/undifferentiated vs moderately/well-differentiated: HR, 1.12 [0.92–1.40]; P=.25). In our entire cohort, receipt of endocrine therapy was also associated with improved OS. Ki-67 index and tumor grade have also been evaluated as clinicopathologic risk factors in HER2-positive breast cancer.10,23 Although we could not report on Ki-67 because it is not a reported variable in the NCDB, tumor grade was assessed and found not to be associated with OS in our patient population.

We showed an increasing use of ACT across all years in our overall cohort and in patients with T1b and T1c tumors. This finding is consistent with prior reports of increasing ACT use.15 We observed relatively high use of ACT in patients with T1mi and T1a breast cancer (26.1% and 46.3%, respectively), and suggest selective use of chemotherapy in this subset given the lack of observed benefit in our report, potential risk of harm observed, and risk of toxicity.

Strengths of this study include the sample size afforded by the NCDB, allowing us to capture most patients in the United States with node-negative, HER2-positive, chemotherapy-eligible breast cancer <2 cm. We were able to construct a propensity-matched cohort and adjust for the known confounding patient, tumor, and facility factors that affect receipt of chemotherapy and OS.

Our study has limitations, including its retrospective design and relatively short follow-up. In addition, unobserved confounding factors can limit interpretation of study outcomes derived from observational data. Some misclassification and treatment underreporting are unavoidable in a large registry-based data set like the NCDB. The NCDB does not provide drug-specific information regarding the chemotherapy administered, DFS, disease-specific survival, and local recurrence. There is a known under-ascertainment of immunotherapy in the NCDB as reported compared with linked databases such as the SEER-Medicare database.25 Additionally, the change in coding of biologic agents in 2013 of trastuzumab and pertuzumab impacted our data set, limiting our ability to definitively identify patients receiving chemotherapy that included HER2-directed therapy. Due to these limitations, we could not assess the chemotherapy regimen recommended, the inclusion of HER2-directed therapy, breast cancer recurrences, or progression-free survival. Our OS data are limited to 5 years given the short duration of HER2 data in the NCDB, with reporting starting in 2010.

ACT was found to be associated with improved OS in T1b and T1c breast cancer and no benefit in T1mi and T1a tumors in a nationally representative cohort of chemotherapy-eligible women with node-negative, HER2-positive, breast cancer <2 cm in the trastuzumab era. During the study period, an increasing use of chemotherapy was observed. We support chemotherapy use in T1b and T1c node-negative, HER2-positive breast cancer <2 cm, but urge more judicious use in patients with T1mi and T1a disease. We caution that treatment recommendations need to be individualized in this patient population. Future investigations are warranted using this data set, with 10- and 15-year follow-up data when mature, as future randomized clinical trials are unlikely. 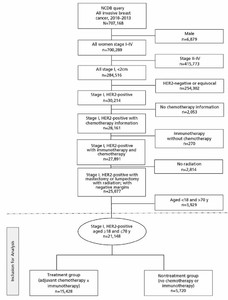 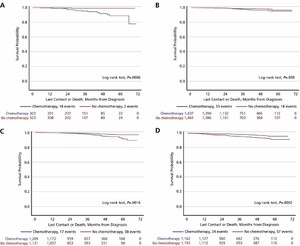